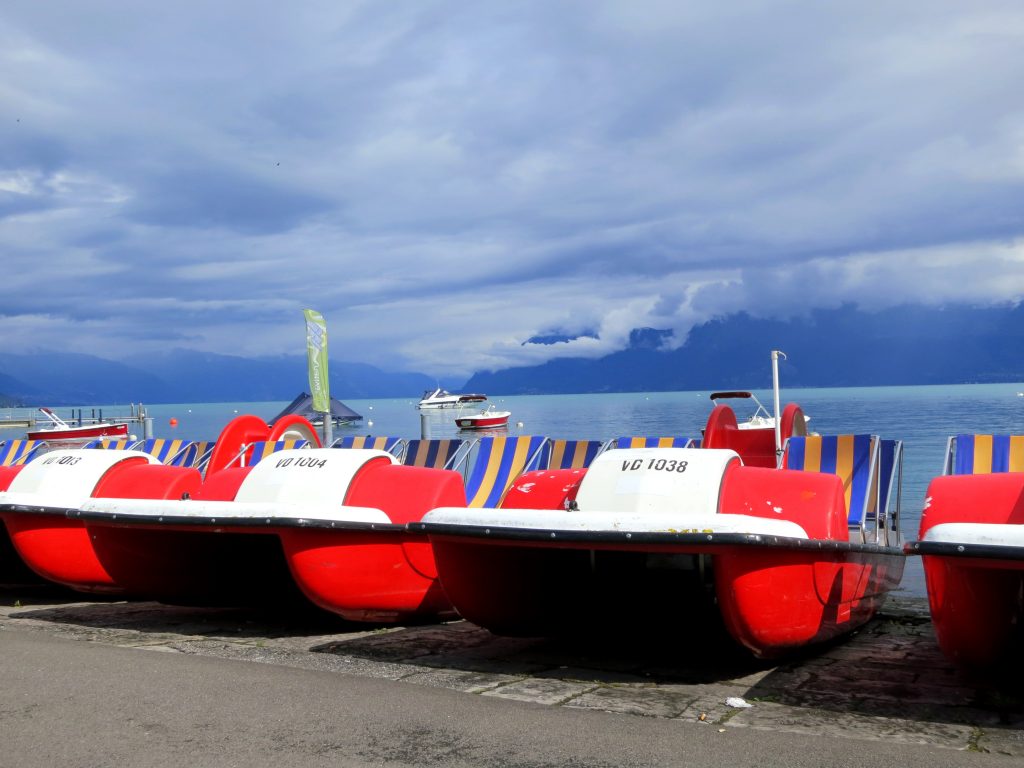 Paddle boats for those looking to tone their thighs.

Rewind back to Lyon, where I sat in an apartment room sending messages to potential hosts hoping to line up accommodation plans for my journey through Switzerland. Being a solo and female traveler, I try to be as safe as possible – always checking for references, and preferring to house with female couchsurfers. I also try to avoid people with only female references (meaning the guy has an affinity for traveling women), people with no references at all, or people who respond with an excessive use of winkys. Unfortunately, for whatever reason, girls simply aren’t as active as guys on couchsurfing.

So imagine my excitement when I message a girl asking to be hosted, and she responds, “I can’t, but my friend Gabrielle probably can.”

An hour later, I get an offer from a brunette ‘Gabriele’ with a strong jawline from Lausanne.

In my head, I figured that the original girl asked her friend and that said friend had now messaged me.

I glanced at the profile but didn’t look too into the pictures or the small details. I read all positive references and the about-me section. It actually seemed like Gabriele and I had a lot in common! Excited to stay with a girl, I readily accepted.

Turns out, Gabriele is the Italian spelling of Gabriel – a male’s name. Obliviously, I took my train to Lausanne imagining girl’s nights out with a dark and masculine looking female. To be fair, Gabriele does have longer hair and wears sunglasses in all pictures.

Gabriele picked me up and we went to a barbeque with his friends on a lake. All were very friendly, even if they communicated in smiles and food offerings more than English. This part of Switzerland speaks French, one of the four official languages of the country.

Gabriele spent the next few days at a work event in Geneva, so I largely had the apartment to myself with his sister roommate. I spent most of my time walking along the lake, ducking into nooks to avoid random rain spells. The Alps dotted the background, and I loved the natural beauty of Lausanne vastly more than the industrial bustle of Geneva.

While the city is small, there are many gardens and even a free Olympic museum located on a beautiful boat on the lakeside.

Cute homes, stores, swans, and a stunning cathedral were frequent sights and stops for me as I wandered around. I was happy to find that the city was relatively free of other tourists like myself.

Not necessarily being a Francophile, I struggled with the French-only bus ticket machines. Gabriele had advised me to take a ticket that was apparently only good for three stops (little did I know). The bus ticket checking brigade had checked me twice in the short time I was in Lausanne… the third time, I handed them my ticket proudly and resumed journaling. The man shook his head angrily and spoke to me in French.

A few seats away, another passenger was being chastised.

My blank expression must have shown a disconnect between his words and my comprehension – but when he pointed at the open door, I understood one thing: he wants me to get off.

The other bad passenger and I left the bus and stood on the sidewalk alongside my punisher until another English speaking ticket policeman came by. I explained that I was using these tickets every time and never had a problem before. I opened my wallet and revealed a black pocket stuffed full with tickets valid for only three stops… I told him that I been using most of them to get across the 10+ stop city.

He laughed and showed me how to pay for the correct ticket. I boarded the next bus unscathed.

The other Swiss passenger, however, was not so lucky… they did not entertain his pleads for mercy and fined him 200 Swiss Francs.

Ignorantia juris non excusat, or “ignorance of the law does not excuse” unless of course, you are a confidently-oblivious-five-feet-tall foreigner.