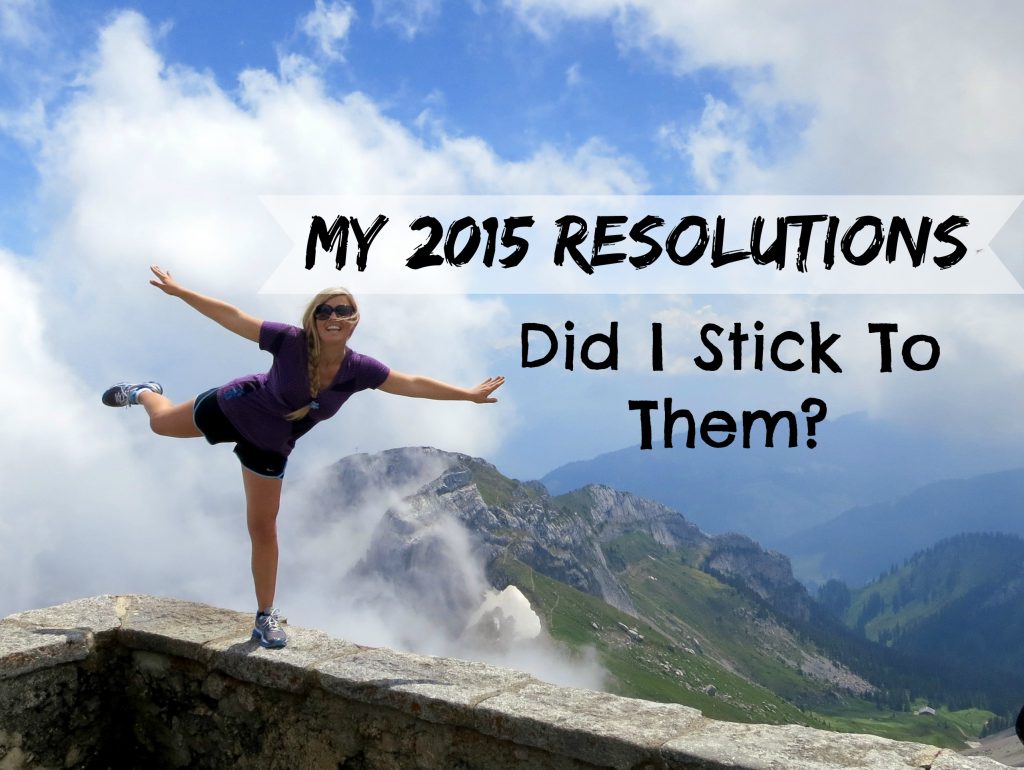 Last Year’s Resolutions: How Did I Do?

It’s 2016! Usually this is a time of year to dream of how we’ll be the richer, happier, fitter versions of ourselves. We envision of new-and-improved lives that are nothing like the old us, completely ignoring the fact that we made the same resolutions exactly one year ago.

But what’s the point of making them if there is nothing to hold you accountable? Luckily, my blog is here to help me audit how things went in 2015.

So, how did I do? Well, I’ll be going in detail on where I succeeded and where I still need major improvement.

Strengths: Overall, this was my favorite goal to complete. I took refusing plastics as a personal challenge and actually cut down 50% of my waste with ease. By always carrying a reusable coffee cup, a steel water bottle, and handful compact shopping bag, it was easy to banish the disposable versions from ever seeing my trash can. Keeping buckets or cloth bags stashed everywhere stopped last minute shopping trips from catching me off-guard (though there were a few instances where my T-shirt served as a makeshift bag) and I stopped purchasing excessive toiletries. I’ve also been more mindful of packaging. When buying produce, I try to choose unpackaged items over plastic-wrapped ones. I also get creative when wrapping or giving gifts – using scrap paper that’s destined for the recycle bin anyways and giving items people truly need if I can’t find an experience to give them instead. While I did buy a few items this year (gifts, a handful of clothes, and sporting equipment), I mostly obtained the things I needed secondhand from friends and family – giving these items a new lease on life. Whenever possible, I picked up stray pieces of trash – sometimes stuffing floating bits of plastic into my wetsuit when surfing!

Additionally, moving closer to the beach and walking-distance to shops meant I spent less time driving (aka fuel waste) places for groceries or to work-out. The ocean is just a short jog from my front doorstep, and when my bike doesn’t have a flat tire, that was a quick and easy option as well. I also cut down on my hours at work, making commuting less frequent (though it is a little farther when I did work).

This goal also made me question what I want this blog to promote. When approached by a company that had a product that fit the overall theme of the blog, I decided against working with them because of their plastic packaging. Hopefully emails like this gently nudge companies in a less plastic obsessed direction.

Weaknesses: While overall I’ve made a lot of progress in this area, I could still make massive improvements. I haven’t found a way to get around most non-produce food packaging *waves fists,* and I am guilty of using disposable cups on the few occasions where I’ve forgotten my glass one. I also haven’t been very good about reminding servers not to include a straw in my drink. The biggest output of waste overall was definitely in the form of fuel consumption. Flights, weekends away, and admittedly lazy short trips (when walking or a bike was possible) contributed vastly to the “get-it-together-girl!” section of this audit.

What I’ll do in 2016: This year, I’ll really strive to cut down on my food packaging as that’s what is consistently filling my trash can. I’ll also volunteer for more beach cleanups and community service programs a few times per month to offset the times I do drive. Another massive source of CO2 production is flying. Living overseas (and being a travel writer) means that I fly quite often. I’ll be looking into participating in carbon offset programs to counter this. I will also focus on action sports that don’t use a motor or much energy to participate in.

Some of my favorite resources: My Plastic Free Life, Zero Waste Home, The Story of Stuff. Strengths: This year was a major success on this font! Aside from being published in multiple magazines, company websites, and online publications, I managed to post this blog semi-regularly (emphasis on the semi). I’ve found more of a rhythm in my writing and hopefully any longtime readers will agree – although I still cringe whenever I reread any of my posts. This has been such a success for me financially and holistically that I’m officially becoming a full-time writer in exactly two weeks. A few magazines have reached out to me for repeat work in 2016. Maybe it will work out? Maybe I’ll use pages of my writing to soak up all of the tears shed from failing miserably? Who knows!

Weaknesses: Even though I wrote prolifically in 2015 compared to previous years, I did not hit my once-per-week blog post goal. For the first half of 2015, I was juggling two jobs – one being high-stress – and freelancing. I hate that I’m months behind on this blog and found it impossible to keep up with freelancing, blogging, a slew of hobbies, and my other job this year without my sanity taking a big punch-to-the-brain.

The biggest failure of this year happened when I was scammed! I took a freelance job to ghost write a 5,000-word self-help e-book under the name “Ian Jones” for some Bulgarian dirt-bag. He grabbed the book and ran without paying me. I will chalk it to being a much-needed learning experience. Now, I know I can write a self-help book within a few hours (ask me about self-esteem, people!) and to never deal with shady clients ever again.

It was basically the writer’s equivalent to being hazed except I still have all of my eyebrows.

What I’ll do in 2016: This blog will have more frequent updates (quit groaning, you in the back!) and I’ll be reaching out to more magazines. I’m also thinking of starting up a photography realm of my business by shooting local action-sports athletes and events to fine-tune my photography skills . I also plan on getting the wheels moving on two books that I have in my head. Finally, I’ve found an inspiring mentor who will hopefully teach me some of the freelance-world ropes as I assist him with his creative endeavors.

Enjoy being instead of having

Strengths: In all honesty, I forgot about this goal. I think because I’ve moved into a minimalistic way of living this came naturally. After I did a massive declutter of all of my junk, this was an easy goal to follow through. Everything I purchased had a function that helped me enjoy life and my experiences. For example, I purchased a new harness for kitesurfing and a new pillow for Moritz so that he can be a morning person now (I can dream, right?). I also focused much of my time with friends and family whenever possible. A big win in this realm was also working less at the job that causes me the most stress. In 2014, I worked as many hours as possible and often found myself moody, sad, and upset for no reason. This year, I drew boundaries and only worked with clients that were a better fit for me (for the most part). As a result, my income was lower than in 2014 but I was overall much happier. Weaknesses: This is a hard goal to pinpoint where my weaknesses were. I really don’t think there was a time where I focused on material goods more than an experience.

What I’ll do in 2016: I’ll keep this mindset and try to look for ways to improve it further. Drop the need for approval

Strengths: In too many ways, I’m a people-pleaser. I hate when people are upset with me and I’m uncomfortable when there’s conflict. This year, I stopped apologizing for things without thinking and I stopped explaining things that didn’t deserve an explanation. My post on minimalism triggered some side-eyeing from a few friends and family members, but it showed me that they still support and care about me despite my ya-ya-save-the-trees beliefs. I had a friend tell me, “I used to think you were a weirdo for your obsession over toxic chemicals” (I held my breath when she sprayed a thick coat of roach killer in a room), but fast forward to six months later and she asked me what ingredients to look out for! Friends and family may not agree with my views or lifestyle, but it doesn’t mean they think poorly of me. Everyone is too busy thinking about themselves anyways!

I’ve also learned to not let rejections (I experienced a GINORMOUS one this year) or unanswered emails affect how I view my progress or my worth. When I see a “Thank you for your interest, we’re sorry to inform you…” email now, I bin it and move onto plan B (or F… or G…). Sure, the big ones occasionally keep me up with worry at night, but not as much as they used to.

Weaknesses: I got my first hate comment! It was written in Australian slang so I actually had to go to Urban Dictionary to decipher the insults (hey – at least I expanded my vocabulary!). Turns out, this classy fellow is related to the owner of a place I wrote about on my blog. I pretty much had the whole family bombarding me from multiple angles.  Anyways, obviously this annoyed me more than it should have which is why I’ve sunk it into the weaknesses category.

What I’ll do in 2016: Hate comments and rejections and everything that’s not-so-nice about pursuing a creative passion just comes with the territory. I’ll continue to grow a thicker skin and stand by my work… even if it means getting called interesting things by dirty-tongued bogans.

Strengths: Sigh, where did I go right with this one? I advanced a few levels in DuoLingo and practiced on-and-off speaking to Moritz and his family. I picked up a few new words and can now speak basic sentences. I’m really stretching for an answer here, by the way.

Weaknesses: This was certainly my least successful goal for the year. I still cannot speak German and I blame not maintaining a consistent routine for this. I did not set aside time during the week to focus on it, so months went by without a German word escaping my mouth. Well, except for a few choice ones here and there. I need to take the time to set aside a few hours a week to play German games, watch movies, or read children’s books in German.

What I’ll do in 2016: I’ll dedicate 2 hours per week to learning German to begin with. I’ll ask Moritz to speak German on car rides and recant our days in his mother-tongue during dinner. Before I go to Germany at the end of the month, I want to refresh the skills I have so that I can practice in person with Moritz’s family.

Boom! There it is. I didn’t succeed at every goal all of the time, but I made some improvements on a few key important areas of my life which is a thumbs up in my eyes.

Thanks for sticking through that whirlwind of a post! Stories about adventuring will resume next week :). How do you think I did? What were your goals? Did you keep them?