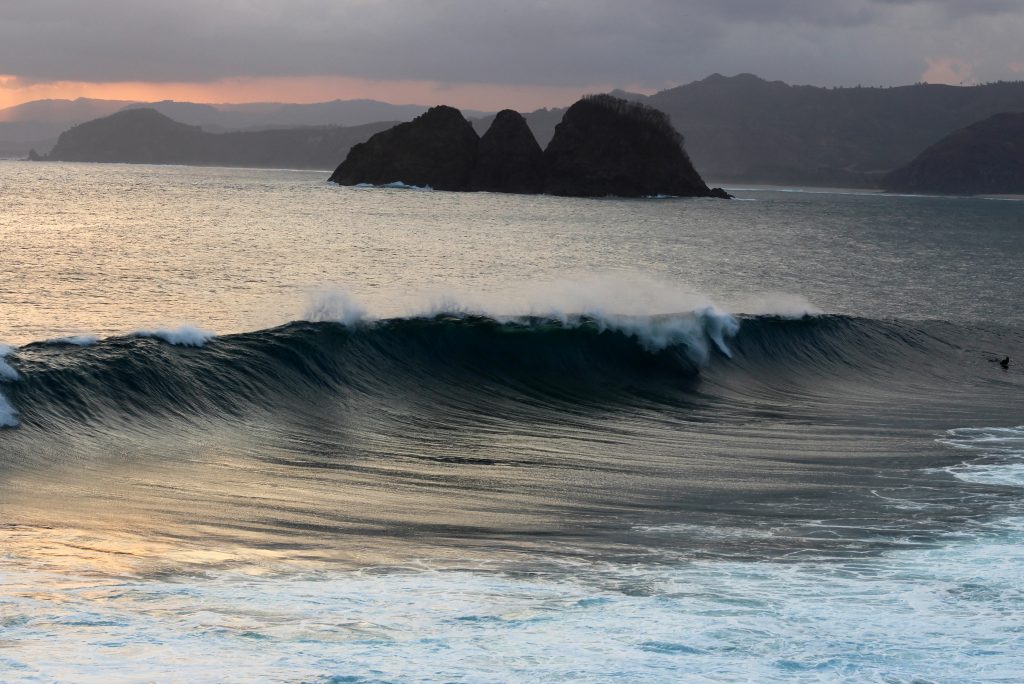 Kickin’ it in Kuta, Lombok

Kuta, Bali is known as the Charlie Sheen of Indonesia. It’s loud, dirty, and appeals to a special type of audience. Thanks to the Australian reality show, What Really Happens in Bali, Moritz and I decided to forgo the drunk-Australian infested tourist trap in search of more hassle free areas.

Kuta, Lombok is more of a rough-and-tumble village rather than tourist catered city. Moritz and I learned this the hard way when we checked into a cheap, stained room and couldn’t figure out how to flush our sludge covered toilet with the bucket and hose next to it. The first night we went out to dinner, a cat ran into the restaurant with an extremely large rat in it’s mouth. Fellow patrons shrieked as the cat ran under our tables and bolted straight into the kitchen. After the cat dropped off it’s present, the waitress held the cat in one arm and delivered food with the other. As our food arrived, my once raging appetite was completely smoldered. This might actually be the first trip where I lose weight.

Toto, I’ve a feeling we’re not in Kansas anymore.

On our way out of the restaurant, my flip flops felt wet and sticky. In Indonesia, it’s customary to remove your shoes whenever entering a building. My stomach churned as I realized that the slimy substance was rat blood that had dripped onto my shoe when the cat brought in it’s feast. Eventually, Moritz and I became used to the grime. We clipped our nails off and used wet wipes to keep our hands clean. The shower produced brackish water and drew mosquitoes into the bathroom, so the time spent in the ocean each day doubled as our bath. We went from homestay to homestay searching for a clean room, finally arriving at the G&R Homestay. G&R Homestay is spotless, has a pool, and run by a friendly Balinese family. I rarely post about places to avoid, but do not stay at the Banana Homestay – the owner attempted to scam us, and the place is extremely dirty.

Kuta, though unpolished, had hidden gems nestled among it. Delicious 15000 Rupiah ($US 1.50) mie goreng from Nana’s Warung filled our hungry bellies after a half-day long surf session. The waiters at The Riviera provided some of the best customer service I’d ever experienced, and joined in on a round of drinks. Even slightly tipsy, one would ask, “are you sure everything is OK? Maybe you want to give me a recipe and we can try to make it just for you?” The fisherman who organized our daily boat to go surfing invited us in for a strong and sweet cup of Lombok copi inside of his home everyday. With our surfboards and a scooter, Moritz and I set out to explore the coastlines of Southern Lombok each day. One morning, we woke up at 5:30 am and drove in pitch-black darkness on a gravel road to meet our fisherman, J.R., for a sunrise surf session. You know it’s early when you’re out before the roosters start crowing! Unfortunately, every other surfer in Kuta had the same idea and the surf spot of Gurupuk ended up being more crowded than it was mid day. Still, it was amazing to watch the sun creep up over the hills, casting a pink shimmer on top of the water as we caught waves. For a sunset session, we’d drive to Mawi, a wind-sheltered spot located 40 minutes away from Kuta’s city center. When the waves were too big for me, I’d salute Moritz from my sarong while nibbling on intricately cut pineapple (15,000 Rp) and spend the afternoon journaling. I got a laugh one day, when two tiny, naked, local brothers shared a broken surfboard. One brother had the nose – the other, the tail. The road to Mawi is sharp-rock filled and unforgiving. On our way there one evening, our tire popped and we were left stranded. I flagged down a twelve year old local boy, and hopped on the back of his motorbike while Moritz stayed behind with our scooter. The boy stopped in front of local houses, honking and giggling when the residents would poke their heads out to see me on the back. Eventually, he took me to his father – one of the village mechanics – and dropped me off in front of their house.

The house was located at the end of a small path in between two farms. When I arrived, a small baby began laughing and running towards me. The mother immediately bathed the baby before letting me hold and play with him. I felt a bit awkward with this and tried to communicate, “Don’t worry if he’s messy – it’s just a baby,” but I’m not sure if the message went through. The baby was quite volatile, throwing a kitten like a baseball across the room! Luckily (or unluckily?), the kitten didn’t seem phased. Chickens, children, and cats scampered around my feet while I waited for Moritz to arrive. My eyes kept falling on their seven year old daughter, who had a badly infected wound on her arm.

We knew from friends that mechanics often tried to overcharge tourists on things like this. One of our friends paid over 8x what a local would pay for the same thing. When I awkwardly brought up the price, the father said, “I don’t want to be one of those people who overcharge – saying ridiculous amounts like 100,000 Rp or 150,000 Rp…. you name the price.”  Moritz and I came up with 50,000 Rp and the man smiled widely and repeated, “Yes, yes, thank you! Thank you!” Later, we’d learn that a changed tire typically ran about 35,000 Rp.

This situation has sparked a lot of reflection on my end, and I often wish we’d gone back to their home and delivered our small bottle of antiseptic. 50,000 Rp means absolutely nothing to Moritz and I – it’s less than a pint of beer in Australia, yet the man was so grateful when we said that price. It’s easy to get caught up in the bartering in Indonesia, and feel angry when the locals view tourists as a wallets with legs. I tried to remember this genuine and honest family whenever someone would try to rip us off – they are doing what they can to make ends meet, and is generally an insignificant amount of money for a traveling Westerner.

Remember when I said that Kuta is really dirty? Moritz was suffering from a nasty reef cut he acquired back in Uluwatu, and it was starting to get infected. We were pointed in two directions — one, to a local healer known for chewing herbs and spitting them on wounds, and the other to a “Western doctor.” When we arrived to the “Western doctor,” he ashed his cigarette on the table and wiped his bare feet off on a mat. Nothing in the room seem sterilized, and the tongs that the doctor had set aside were just for show. He grabbed an alcohol pad, and without warning, scrubbed Moritz’s infected foot like it was a crusty casserole dish. Halfway through the cleaning, an skin-and-bones Westerner walked in and asked the doctor for a needle. The doctor tossed him a needle and took the Westerner’s money (US 0.20) before getting back to Moritz’s foot. “In your countries, you have take medicine for everything,” the doctor said, shaking his head in disgust. A few antibiotics and bandaids later, we were out of our first Indonesian medical experience.

In Lombok, everyone rides motorbikes. Children piled 4 to a scooter will drive over and hop off, trying to sell a bracelet. These children would do amazingly at pick-up artists when they’re older. If they get a whiff of English, they introduce themselves by, “Oi, Mate!” When Moritz denies buying a bracelet, they immediately blurt, “Come on – buy it for your girlfriend. Don’t you think she deserves it?” The answers change as to why they’re selling bracelets, “for school/for the orphanage/I don’t know!” I have mixed feelings on children selling bracelets, and did not participate in buying them. Kuta ended up being a place we grew to enjoy, but were happy to leave. It stoked my desire for adventure, especially when we spent full days driving from beach to beach far away from any semblance of modern civilization and took fishing boats to some of the world’s best waves. We got to interact with locals on a level deeper than simply being their customer. It provided the challenge of traveling that Bali didn’t – and overall, our trip was more wholesome because of it.

Kuta, Lombok – I’ll be back… but probably in the off season, when the waves are less crowded.