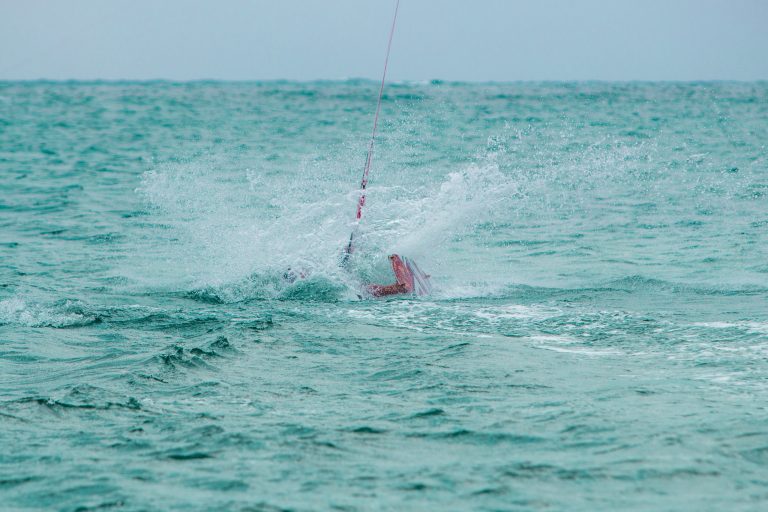 Kitesurfing is a high-maintenance sport. There’s absolutely no refuting this.

Let’s just look at the gear. You throw down a fortune on the kite, harness, bar and lines, board, and bindings. Any gear that’s torn, rusted, or sandy is sure to be a safety hazard and needs to be repaired. You can’t put around on dinged-up grandpa’s gear like you can with surfing, skiing, or snowboarding. Even setting up the kite and launching it requires attention to detail and more time that anyone likes.

When you wipe-out while kitesurfing, you have to keep an eye on your kite, your board, and your body and get them all under control before things go pear shaped. It’s a difference to many other action sports where you can rest for a few minutes and recoup before getting back up again.

Maybe it’s my personality. I’ll be the first to admit that there are moments where I get frustrated too easily and often curse under my breath when doing something that most people would deem fun and exciting. Is kitesurfing dangerous? Am I unlucky? Or am I just a scaredy-cat with a keen memory for bad times?

Nonetheless, I’m still convinced. There’s a hazing period of a minimum of one season where kitesurfing drags you through the metaphorical trenches to prove that you’re not a wimp.

Attack of the Jellyfish

It was a beautiful sunny day in Perth and the conditions for a kitesurf couldn’t be any more perfect. The waves were small and we planned to do a 5 km (3.1 mi) downwinder (where you simply go with the wind from one stop to the next) from City Beach to Scarborough. I launched my kite ahead of Moritz and our friend Adam, feeling confident and ready to ride. I rode past the waves without any problem, and started getting gutsy. I charged through waves, turned, and felt like a kitesurf superstar.

Usually, not a big deal.

Except this time, I fell on a swarm of clear jellyfish with long hair-like tentacles. The tentacles wrapped around my thighs and one jellyfish was stuck in my wetsuit, stinging my right buttcheek until I reached down and pulled out the clump of jelly out with my bare hand. I yelped in pain but continued riding more cautiously – afraid of falling but convinced that it was a rogue pod of evil creatures that I wouldn’t encounter again.

Then, I fell again and lost my board conveniently in the middle of a much larger swarm. To get it back, I dragged my body through the swarm of jellyfish and they stung my skin wherever it wasn’t covered.

My uncovered legs, hands, and neck burned with their venom. I felt my skin swell.

Moritz rode by me with a huge smile on his face and yelled, “How are you doing? It’s great, huh!”

I looked at him with red, crying eyes and screamed, “I GOT STUNG BY JELLIES!”

After getting my board back, I realized that I wasn’t even halfway to our destination and that there’d likely be many more venomous swarms along the way.

Then, I dropped my board again in the middle of yet another cluster of jellyfish. Reeling from pain, I thought, “Screw it!” and relinquished my kiteboard to the ocean. Go on jellies. You pointlessly evil cretin. You can f-ing have my board! I dragged my body to shore and landed my kite. A good samaritan retrieved the board for me. My entire legs looked diseased with bumps and long red burn lines from the hundreds of stings.

I now know that jellyfish only exist to be jerks.

I packed up my kite and started walking the remaining ~2.5 km (1.5 mi) to Scarborough. Still ugly-crying, I was really embarrassed when someone’s dog kept jumping onto me trying to play. I nudged the dog off of me, but he wouldn’t leave me alone. Go away. I don’t want to be happy. The owner came over and attempted to make small talk. I’m not sure if it was my beet-red face, reptile skin, or unpleasant disposition that made him take a hint and promptly walk away with the mongrel.

A local kitesurfer along the way offered to give me a ride back to Scarborough so that I wouldn’t have to walk. Delirious from the pain, I sat in the driver’s seat of his car. He told me, “That’s alright! You’re obviously new to Australia!”

“I’ve been here for two years.”

Back in Scarborough, kitesurfers compared battle wounds. Moritz had a deep sting across his back and one girl sported a painful burn across her eyes. Sadly, fellow beginners who fall often bared the brunt of the jellyfish wrath.

What I should have done was put vinegar or hot water onto the venom to take away the pain. Unfortunately, I didn’t have my house key to do so and was locked out for the next three hours. Instead, I just suffered and downed two beers at a picnic later that day. One angelic girl offered to give me her essential oils after I pulled down my pants and showed her my legs.

You know better than to take this type of advice from me, right?

There’s a spot called Pinarroo Point. The wind and waves are really friendly for kitesurfers unless you accidentally go too far into the Danger Zone. Note: not the official name. Once you hit the Danger Zone, all wind stops and your kite falls out of the sky like a bird shot in the air. Boom. Down. And there’s nothing you can do to relaunch it. Er, well at least nothing I could do to relaunch it.

My third time kitesurfing, I went into the Danger Zone and watched helplessly as my kite fell out of the sky. Unsure of what to do, I pulled my safety release and partially disconnected my kite. Since there was no wind, I couldn’t self-rescue without swimming myself back to shore. The sun just set and I’d be a downright liar if I said there weren’t sharks on my mind. Moritz swam out to help me and together we dragged the tangled gear to the beach.

On a long road trip to Esperance later that week, Moritz and I took turns untangling my lines while the other drove.

And I thought having long hair was rough.

I’ve seen this exact scenario in the same spot happen to a few other beginners over the years. Now, I nod and think, yes – young grasshopper, I was once where you were.

N00b tip: Don’t disconnect your lines if they are tangled. Keep them attached to your kite if you can.

“The conditions aren’t good for me. I really don’t have a good feeling about this.” I looked at my small kite, barely flapping in the light wind.

“You’ll be fine. If anything happens, we’re right here.”

Never again will I trust the words of my friends. Instantly after making it past the waves, my kite went down and wouldn’t relaunch. It dragged me towards the sun soon to sink below the horizon. My internal freak-out complete with running commentary kicked off into full gear. Ding ding! Right on schedule.

So. This is what it’s like to be waterboarded. That dark patch under me? Yeah, that’s definitely a shark. It looks like it’s been following me for a while. It probably feels sorry for me and is waiting for me to just drown. Oh, no, just a shark-shaped ball of seaweed. I’m just a human-lure. No biggie. How do I self-rescue again? I’m pretty sure that the kite should’ve relaunched by now. Yep. It definitely should’ve relaunched by now! The sun is going to set and I’m going to be stuck out here alone. I thought yoga was supposed to help me with this! Deep breaths. Don’t sharks feed at sunset? But my chances of getting eaten are like one in a billion. But, do the statistics factor in people deep at sea during prime feeding time? And this is Western Australia? No, I’ll be okay. Well. Maybe. I knew I should’ve never gone in.

Eventually, with the help from my friend, I climbed on top of my kite and turned it into a sail. Fishermen always set up their poles during sunset – remember, prime feeding time – and the fishermen closest to me were too rude to reel in their lines. While body-dragging over shallow water, I hit a patch of sharp shells that shredded my thighs and feet. It was really painful to walk over the next few days, and I wore an old pair of socks every time I went to the beach so that sand wouldn’t enter my wounds. The worst thing is, I put my protective surf booties back in the garage and told Moritz before leaving, “Nah. I definitely won’t need these.”

Honorable Mention: “I Didn’t Want to Scare You”

In Shark Bay, small sharks and rays swam under me while I kitesurfed. It was one of the most incredible experiences I’ve ever had, and the shallow, warm water kept my mind at ease despite the plethora of toothy sea-critters.

A few weeks after this experience, a friend who was kitesurfing behind me revealed, “While you were standing in the water trying to start kiting, a large shark was just behind you. I didn’t tell you because I didn’t want to scare you.” I Still Love It… Usually

From broken bones, to unstable wind, to tangled lines, to jellyfish stings, and popped kites, there’s a lot that can happen when you let a piece of tarp and some strings fly you across the water. Of course, what’s not featured here are all of the times where I felt proud of myself, had an insane amount of fun, and experienced the second-to-none feeling harnessing the Earth’s energy. This wouldn’t be a well rounded adventure blog if I only posted a highlight reel though, would it?

The other week, Moritz experienced his own kiteastrophe. We vented to a friend about how kitesurfing feels a million moments of frustration with a few glimpses of happiness.

Our friend sat for a moment and said, “Yeah. Kind of like life itself.” What about you guys? Tell me I’m not the only one who sometimes wishes I’d stayed home instead?