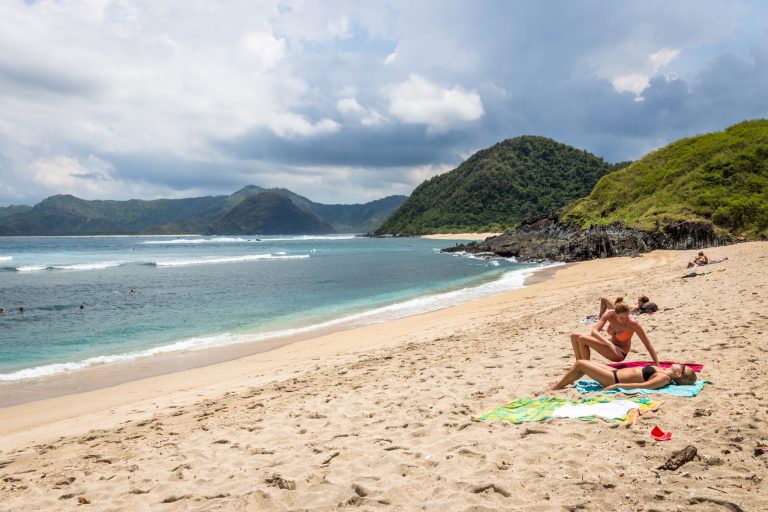 Sex and Surfing in the Land of 1000 Mosques

In the stillness of the morning, just before sunrise, mosques blare the call to prayer from loudspeakers. As daylight emerges, the voice of the imam is muffled between the revving of motorbike engines and crowing roosters. The reggae bar finally shuts down for the day. Surf tourists donning bikini tops and board shorts set out to nearby waves – anxious to catch them before the wind switches and the crowds roll in. Welcome to Kuta, a small surf town on Lombok, the Land of 1000 Mosques.

Indonesia is the largest Muslim country in the world, hosting around 12% of the world’s Islamic population. The island of Lombok is a big tourism destination for Islamic travelers who love seeing the natural beauty and many mosques that Lombok claims as its own. The Sasak people are typically very conservative, modest, and dedicated followers of Islam — they also speak their own language in addition to Bahasa, the official language of Indonesia.

Interestingly, Lombok is also one of the biggest surf tourism destinations in Indonesia. Surfers from all around the globe head to Lombok in search of waves as well as the typical backpacker cravings — sex, parties, and cheap alcohol. And because there’s a demand, there’s a thriving market for all three vices. The clash in culture is obvious in the little town of Kuta, Lombok. Beers sell for $2 a bottle and halal food can be found on every corner. Tourists clad in Bintang tank tops strut down the streets past locals wearing hijabs. Sasak men teach bikini-clad Western women how to surf while their wives stay ashore, fully clothed. The island of Lombok is still relatively undeveloped. There are frequent power outages, dirt roads, and a wage of $10 per day is considered decent. When I bought $200 worth of goods in Kuta, Lombok, the sellers told me that this purchase was larger than what they expected to make for the entire summer. Right now, chartering surf tourists around in the nearby fishing village of Gerupuk is often more lucrative than selling their catch of the day. Real estate developers are getting a whiff of what potential the island has for tourism, buying up land at insanely low rates in hopes of creating Bali No.2. When I stepped off the plane and visited Kuta, Lombok a few months ago, I had one question in mind.

What do the locals think about this?

My first day back in Kuta, I walked to a local pizza joint and ordered a pie for myself. Business was slow so one of the workers sat down across from me. Within a few minutes, local kids trying to sell bracelets came by to see if they could strike a deal. I refused to buy a bracelet but offered them a slice of pizza. The oldest one took it happily and the littlest guy, maybe five years old, started slurping the rest of my iced tea.

I started my informal interview with the pizza guy and asked him if 1. he was Muslim and 2. whether he was from here. He affirmed both.

Every time I started this conversation, I prefaced it by saying something along the lines of, “Kuta is a Muslim and conservative community. The tourists who come to visit aren’t, right? The tourists drink alcohol, wear bikinis, and men and women travel together without being married. What do you think about the tourism that comes to Kuta?”

The pizza guy was about my age and started to talk openly. “I don’t think there’s a problem. Tourist and local live separately but it’s okay, we understand you come here with differences. There’s no issue here.”

He then went on to explain that he’s made money selling drugs to tourists — a crime punishable by death in Indonesia.

“I want to go off with Australian or Western women,” he mused.

I quickly picked up that go off with was an euphemism for “have sex with.”

Maybe he wasn’t my target participant — after all, a drug-dealing man with a penchant for foreign girls probably wasn’t ever too conservative in the first place.

“Let me know if you want to hang out tonight,” he added.

“Well call me Mr. Mushroom. Next time we’re together, I’ll put some mushroom on your pizza.”

I paid my bill and walked out. A few days later, I hopped on the back of a motorbike with a surf guide named Ozzy. We rode to Ekas, a break about twenty minutes away from Kuta. In the water, he told me and a few friends where to sit as the waves rolled through. I rehearsed my script and asked him if teaching Western women how to surf was considered shameful by his elders.

“Ten years ago, it was a problem. I couldn’t be teaching girls how to surf.” Ozzy gestured to his chest and groin.

“Of course, because of the bikinis.”

“Yes. The leaders of the mosque didn’t like that. Now, I can teach people how to surf. We now know that tourists are here for surfing – for vacation. It’s okay. We can live here.”

He paddled for a wave and left me to think on my own.

I proposed this question to over fifteen locals during my stay. Oftentimes, locals changed the topic to vent about the rate that their land is being developed by foreign investors. They liked the economic aspect, but hated that the landscape is changing at breakneck speed. In town, Sasak businesses struggled while foreign ones thrived.

Australian-owned cafes and businesses in Lombok know how to appeal to tourists with trendy decor, acai bowls, and free wi-fi. Surf tourists flock here in lieu of the Sasak owned warungs serving nasi campur or mie goreng. Every time I walk into a cafe serving perfectly frothed cappuccinos or browse the clothes of a Western boutique, I hate myself a tiny bit.

I popped into a carpenter’s shop and asked the standard questions. He ignored the reference to bikinis and alcohol and solely focused on the tourism aspect.

“It’s good and bad. I create the furniture for the new resorts, hotels, and homestays. But Lombok is not going to belong to the people from Lombok much longer.”

I started a small business in Lombok with a handful of Sasak women and we quickly became friendly with one another. They often joined me for my meals and we spent hours chatting on the beach. One of the girls tugged at my tank top with an elephant printed on the front.

I looked at her long-sleeved top, ankle-length skirt, and hijab. “Yeah. Will you wear it?” I winked.

She picked up a piece of long fabric and wrapped it around her chest, “Western girls like to wear this cloth like this.” She mimicked a strapless bikini top.

“We use it as a table runner!” She laughed and playfully shoved my arm, “It’s too hot in Lombok to wear a scarf.”

“Is it weird that Western girls go around wearing it like that?” I asked the group, running the fabric between my fingers.

“No, tourists are tourists. They live like tourists and we live how we live,” One said and the rest nodded.

“Why don’t any of the local girls surf in Lombok?”

“Why doesn’t your husband take care of the kids, and you go surf?” I teased.

One of the women laughed and yelled to a local man in Sasak. He came over and caught up on the conversation.

“There is one girl who surfs in Lombok. She’s very good. And a few surf guides are teaching their daughters how to surf. The problem is — there are so many kids at home.”

Down the beach, a two women splashed with a girl in the sea. The general consensus: women didn’t surf because they either helped their siblings, or were busy raising kids of their own.

And when we talked about tourists mingling with locals, the two lived harmoniously. I can’t buy it. Surf tourists and backpackers are notorious for being rowdy and constantly on bad behavior. Is all of that just ignored by the Sasak locals in Kuta? Has the tourism been so constant here that they are completely desensitized to foreign mischief? Or are they censoring themselves in my presence, afraid of offending me or driving away my business? Surely there was some conflict between younger and older men, as the older men watched Sasak teenagers drink and sleep with foreign women. I wonder how they’d answer these questions if I asked as a Sasak man. Or, am I looking for tension that’s just not there?

Despite these sunny conversations and people’s pleasant demeanor, I sometimes felt the pulse of animosity. I’ve been scammed in the past by Kuta locals and crime is semi-common after dark. On my second to last day in Kuta, a miscommunication occurred with a local shopkeeper. He yelled in my face and threatened to hurt me if he ever saw me again. Sweat poured down his forehead as he yelled, “Tourist is supposed to be smarter than local!” I felt scared and double checked my door that night to make sure it was locked.

“Don’t send anyone up who asks for me,” I told the bartender at my guesthouse.

Every night, I walked back to my rooftop room and was met with a chorus of, “Welcome home!” by the guesthouse employees. Sometimes, a few of the girls would climb up to my patio, sprawl out on the floor, and play Indonesian pop music — humming along to the tunes while I pecked away at a document titled “Kuta Notes” on my laptop.

On the last night, my cursor blinked at the end of a sentence that read, “After this short chase for answers, I’m confused.”