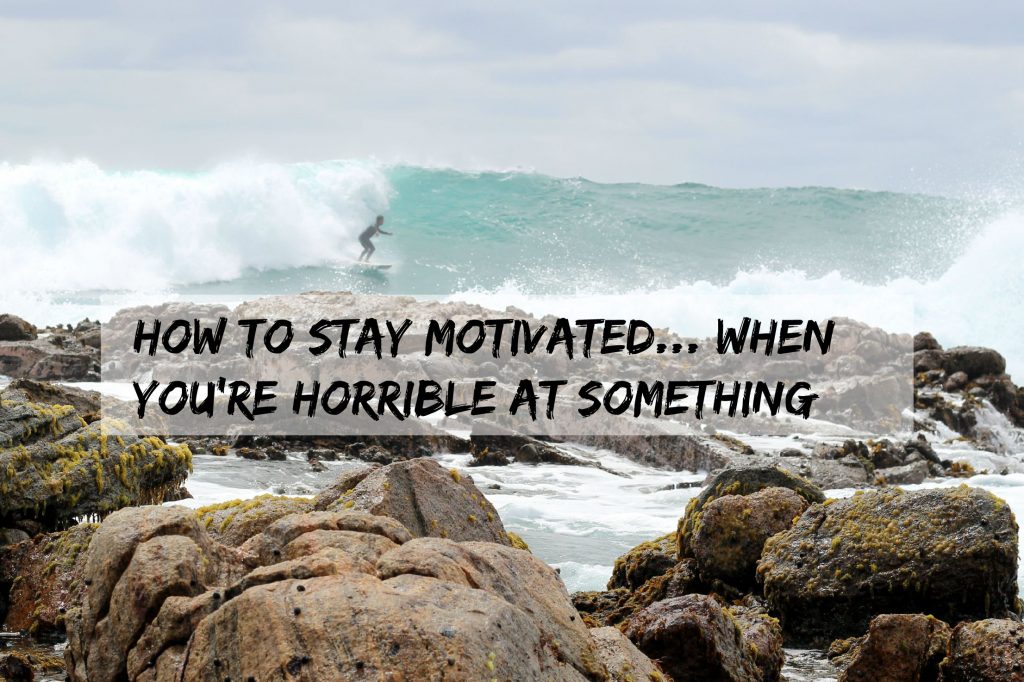 How to Stay Motivated When You’re Horrible at Something

“Do you have a leg injury?”

No, for the 100th time – my sweet yoga teacher – I do not have a leg injury. I am just horrifically inflexible. Despite practicing yoga for a few years now, I still can’t touch my toes.

“Touching your toes is underrated anyways! You get all of the same benefits from going to your shins!” A teacher recently consoled me, before turning himself into a human pretzel.

He doesn’t understand. Having hamstrings that refuse to stretch has caused all sorts of trouble in my practice. I can’t do balances that my arms are capable of because my stumps refuse to cooperate. I dread bending forwards, for fear of snapping like a piece of uncooked spaghetti. And whoever said downward dog is a resting pose needs a swift kick to the head (if only my legs could lift that high…)

And yet, I still go back day after day, knowing that while I probably still won’t be able to touch my toes by the end of the week, I might be better than I was yesterday.

Yes, I realize there’s no good or bad in yoga and that yoga is also a mental exercise, but the physical aspect has been testing my mental aspect!

So, there’s the yoga thing… but I’m also terrible at staying calm while surfing around a lot of people – causing me to freeze and at times, even cry (yeah… I can be quite the sook).  When crowds and reefs are involved, it’s a recipe for me to marinate in self-doubt and negativity.

Most recently, I’ve combated ignored emails and blatant rejection for a proposal that I view my brain child. Rejection is rarely synonymous with motivation. Nobody reads an “unfortunately, you are not the chosen one” email, stands up, and thinks “it’s time I conquer the world! :D!!!”

So, how to stay motivated when you feel like giving up?

Own Where You’re At

In an ideal world, I’d be as limber as a Chinese gymnast, surf like Stephanie Gilmore, and pump out novels on par with Steinbeck.

But reality says that I’m just slightly off base with that one (only slightly!). Once I started getting to know where I was in terms of skill level, I accepted it and owned that as part of where I am. Likewise, it’s important to do this with your strengths. Having stiff legs and strong arms is neither a good nor bad thing, it’s just how it is. If you can acknowledge what you’re capable of, then you know what path start on.

An Everest climber doesn’t calibrate her compass and think “I am a loser. I only climbed half of the mountain so far!” before throwing her boots across the tent. The Everest climber has the ability to see the bigger picture. She can’t get to the top before putting one foot in front of the other and moving forward.  You can’t accomplish anything without starting from the beginning.

How to do it: Assess your skill level and look at what your long-term goal is. If you kept moving at the pace you are now, where would you be in one month? One year? Five years?
Examples: I am 2.5 inches away from touching my toes in yoga. I can surf without hyperventilating in non-crowded waves but panic if people are near. I am just starting to build my portfolio in writing. Maybe you’re not a superstar at it yet, but you’re learning something new every time you attempt to do whatever it is you’re horrible at. If anything, it’s giving you the skills of being persistent and that is one of the key ingredients of success. If it’s something physical, think about how much stronger your body and heart is getting even if the progress isn’t obvious. Every proposal or idea you come up with in your career also helps further you even if you can’t reap the benefits immediately. It’s silly, but I envision myself as Iron Woman when sending out applications and ideas to editors. Every ignore or rejection pings off of me like a rusty nail and any feedback is absorbed to make me stronger. I take failures and rejections less personally than I did a few months ago. How to do it: List your talents and abilities. What can these help and cross over into? What are your failures and setbacks teaching you?
Examples: Paddling for waves while surfing helps my arms get stronger for yoga. Learning to be patient in yoga helps me get through the days when my emails go unanswered. All of these things teach me persistence and give me strength.

Every goal has building blocks that make up the bigger picture. Every novel is written page by page and every marathon is run mile by mile. Sometimes you might feel so low that it seems like you’re moving sand grain by sand grain to make up an entire brick before moving it. That’s okay! Break up what you like into smaller tasks – a psychological phenomena called chunking. List out the steps and then take a proactive approach to tackling them. Time and repetition are in your favor.

How to do it: Keep a physical log of your progress. What actions are your bricks? It can be time spent on this activity or a milestone you’ve reached. Write it down to look at for motivation when you feel frustrated and to keep yourself accountable. It can be as impromptu as keeping tally marks on a piece of paper or a note in your phone. Don’t be vague. ‘Work on fitness’ isn’t a step. ‘Run one mile’ everyday is.
Examples: I look at how many hours I’ve spent at yoga each month. I keep a highlight reel in my phone of my favorite waves to gain confidence for surfing. I write a running list of ideas and proposals and send them to relevant people. After a few months of this it’s easy to have physical proof of progress.

Stop Comparing Yourself to Others

Jealousy is one of the most negative, pointless, and demotivating human traits. Let’s be realistic, there will always be someone better than you at whatever you’re attempting and there are a multitude of factors as to why that is. It’s best just to get over that and instead be inspired by those who are further along than you. They were once where you were, most likely.

How to do it: Be inspired rather than envious of others. What can you learn from someone who’s further along than you? What mistakes did they make that you can avoid? What helped them get there?
Examples: I try to learn from my role models and congratulate their accomplishments. Alastair Humphreys has helped me with my expedition proposals (unbeknownst to him!). My surfer friends offer me great advice. A former yoga teacher inspired me to continue because I saw how happy her own practice made her.

Chances are, you were once horrible at the things you’re good at now. Unfortunately, many of our beginner phases came at a time when we had parents and adults around to shower us with praise and motivate our fragile little souls to move forward. This is the case with wakeboarding and snowboarding for me – my beginner phase happened with family praising me to get off my tuchus and keep moving. As an adult, we have to pat ourselves on the back and surround ourselves with people who inspire us to keep going on the things we start now. Luckily, with the advantage of the internet, there are clubs and meetup groups for just about any hobby in existence. With a group, the activity can become a social event instead of one that leaves you feeling frustrated.

How to do it: Use MeetUp,  Couchsurfing, and Facebook groups to find like-minded people. If there’s none in your area, then start one yourself. Ask friends to join you on your adventures.
Examples: I joined a yoga studio because self-practice wasn’t working. I’m in a few social surf groups. I have a network of writer friends where we check each other’s work. I have a partner who supports all of my endeavors. I sever ties with dream killers or people offering demotivating advice.

PSSST: I hosted a Bike to Surf Week in Western Australia! Read more about #BikeToSurf and create one of your own!

Just Give it a Go!

Just show up and try. You might fail miserably… or you might not. Great inventions and ideas are an accumulation of all the failed attempts before it. It’s better to try and fail than to wallow in self-pity and give up. Keep trying and trying until you make it through. The day you give up could be the day you would have succeeded. That’s a big risk to take! If you can enjoy the journey, then ultimately it doesn’t matter what the outcome is. Maybe at the end of five years, I still won’t be able to touch my toes. To this I say, who cares? At least I tried and had fun in the process.