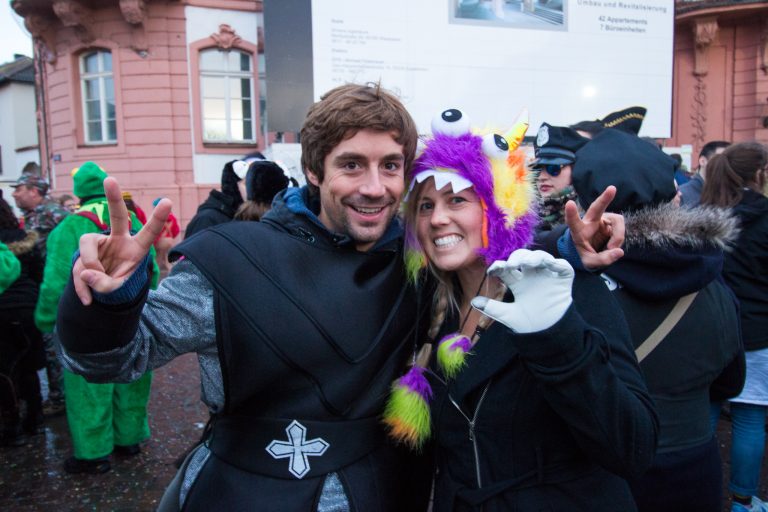 How My Relationship Survived Fastnacht in Mainz, Germany Mo and I boarded a plane together in early February to visit his hometown of Mainz, Germany. Coincidentally, this visit overlapped with Fastnacht, a celebration that would put our relationship to the greatest test. We’ve survived multiple bouts of long-distance, moving across the world together, and have managed weekly dilemmas of who’s turn it is to grocery shop… but the real key to knowing if we’d be in it for the long haul would be making it through five days of Germany’s Carnival.

Starting on the 11th of November at 11:11, Mainzer Fastnacht is a carnival where parades, political plays, all-night-long parties, costumes, and feasts manifest into one big extravaganza. Mainzer Fastnacht is steeped in political commentary, history, and humor that goes deeper than the superficial celebration that I’ll be sharing here. When our plane descended into Frankfurt, I worried that maybe — just maybe — I’d be flying back to Australia heartbroken and newly single.

Fastnacht Carnival only existed as a bedtime story for me until this year. Mo reminisced on Fastnacht memories with a twinkle in his eye.

He’d tell me about his friend, who dressed as a worm every single year by cutting off the bottom of a sleeping bag. I fell asleep to the image of his friend squirming in a beer flooded ditch, with no arms to prop himself upright.

He’d tell me about inebriated men who scaled the side of the Mainz Cathedral with the grace and skill of Nepalese Sherpas.

He’d tell me of one man, a Robin Hood figure, who stole 500 wristbands from a prestigious nightclub and threw them out to the plebeian crowd.

Based on this anecdotal evidence, I wasn’t sure if I was ready for the full Fastnacht experience.

Early that first morning, Germans dressed in colorful costumes made their way to the streets. Our bus was filled with cats, pigs, colorful hats, and pieces of ribbon stuck to the cracks of every window. Since Carnival takes place in the dead of winter, plush animal onesies over puffy jackets were the universal costume of choice. At that very moment in Rio de Janeiro, nipple tassels and sequins ruled the streets. Here, even the supermodels looked like genderless blobs in fleece costumes. Festive, yet comfortable. I could get behind that.

If my relationship was going to be put through the ringer, I at least wanted to have proper weaponry and supplies.

We rummaged through Mo’s garage in search for perfect outfits. Out of dusty boxes, we uncovered vinyl trench-coats, headbands with felt bobbins, and other relics from Fastnachts’ past. Mo’s eyes gleamed the second his fingers touched the rough fabric of his beloved knight’s costume as if he’d never seen anything more dazzling in his life.

We went into downtown Mainz costume shop. I tried on a skin-tight lycra mermaid ensemble. But due to the cold, I slipped on a size that would fit over jeans and two jackets.

I revealed my new look to Mo.

My ego shattered into a million pieces, like the discarded beer bottles starting to line the streets.

Hundreds of costumes adorned entire costume shops. Every type of pirate, bug, princess, and mythical creature was up for sale. Overwhelmed by the cost and choices, I settled on buying a monster hat and hand crafting a sherbet-colored tutu to match.

Looking in the mirror at my googley-eyed hat and puffy skirt, I thought to myself, “Bring on Fastnacht.” Over the next few days, Mo and I met up with his lifelong friends and wandered the cobblestone streets of Mainz. Every few blocks, a stage played music in preparation for the coming of Lent. Popular tunes included smash hits by Britney, Shakira, and the Spice Girls. Marching bands charged through the alleys.

Everywhere else in the world, alcohol and big crowds are a disastrous combination often resulting in violence and crime. But in Mainz, an increase in alcohol directly correlated to an increase in dancing, cheering, and hugs from strangers. We entered a smoke-filled tent with a long line out front and music booming inside. One of Mainz’s most traditional Fastnacht songs, “The Shadow of the Dome,” started playing. The tent roared in unanimous German harmony. I looked around and saw a few people getting emotional. One girl was ugly-crying while singing and chain-smoking. Groups swayed and hugged. I must have looked confused, because a tall panda leaned down and started translating in broken English. “They just are really passionate,” the panda digressed. I shrugged. Once the song turned to the Spice Girls, the crying stopped and the party continued.

Germans who were once strangers paired up and walked off into the night. The panda found a seductive cactus. Jesus found a wine-soaked unicorn. The glove of Mickey Mouse held tightly to the bloody hand of a zombie.

This is how Fastnacht relationships are born.

We danced, we roamed, and we met up with friends who shared intimate details about Mo’s past.

For every “why?” that was asked, the only answer given was, “why not.” Energy pulsed through air, especially once the sun went down.

Mo and I bought a dual train ticket which meant that even if we emotionally split up, we’d have to physically stick together until Fastnacht’s end — else we’d have to pay another 6 Euro.

One night, we went to a club so jam-packed with bodies, the humidity rivaled an Indonesian jungle. We peeled off the outer layer of our costumes and chucked them into the corner of the bar — the only place that wasn’t drenched in stale beer and sweat.

As we were dancing, someone literally tore the shirt off of our friend. The sound of ripping fabric acted like the screech of a record player and for a moment, everyone stopped. Then, suddenly, there were more rips and tears. Within a nanosecond, it was socially acceptable to tear off the clothes of the people around you. Shirtless men surrounded me. While one devil was kissing her newly-found sweetheart, I snagged the horns off of her head and chucked them across the room. She unpuckered her lips and grasped at her skull in a panic. I hid behind a tall pony. Fastnachters dumped full glasses of wine, beer, and miscellaneous objects over each other’s heads and howled like wild baboons.

The club went completely bonkers. A man with a battery-powered lamp costume fled the scene, afraid of being electrocuted by the alcohol spray.

When we left, the silence of being out of the primate cage was deafening. The boys clutched the scraps of their shredded t-shirts. Whatever clothing still intact plastered to our skin, heavy with beer.

I looked around for the bacteria costume, only to realize that the holler was directed at me. I devolved from a cute monster into a stinking, haggard bacteria. I took one whiff of my arm and concluded, that yes, bacteria is not only an accurate description of my costume, but also of my being.

I say that this was day five, but really, who knows? There was a divide between the men and the women of our group. The men wanted to repeat the intensity of the night before while we women craved calmness, peace, and to sit on a chair that wasn’t sticky. We attended the Fastnacht Parade and wandered the streets in a daze. We walked from club to restaurant to bar to street corner. Every place being too wild, too calm, too loud, or too expensive for anyone to be happy. Nobody wanted to compromise in this relationship. “I don’t think I can survive another day.” I whispered before opening my eyes the next morning.

On the last day, Mo and I were invited to one final party that started at the ripe hour of 10:30 am. We pulled on our putrid costumes, filled with holes and stains from the rough days before. At the top of the apartment complex, six gorillas hollered down at us… before throwing small objects at our heads. We ran inside the building, making it to the party unscathed. Snacks, drinks, costumes, and chatter filled the entire apartment. Though we didn’t speak the language, and though they’d never met me before, everyone treated me as if we’d been friends for years. As one big group, we made our way into the city center, befriending Afghan immigrants and fellow Fastnachters along the way. The bus broke out in song. Confetti covered everything. And despite the freezing rain, people flooded the streets. The gorillas saw a banana. The banana saw the gorillas. The banana ran. The gorillas chased it and tackled it to the floor, in a rambunctious hug. Mo and I stuck together while other couples began to fragment. In an emotional concoction of loneliness and alcohol, couples who did split up had one or both partners spending a few minutes of the day in tears. On the final show of Fastnacht, Mo and I stood behind the rest of the group and watched the night unravel. Maybe this made us boring, but we enjoyed narrating the scene from the distance, on the fringe of the chaos. Though a talented band was playing, we were captivated by the crowd. To our left, a male giraffe and female squirrel were both crying. They’d embrace, and cry. Separate, and cry. They repeated this a few times until a second male entered the picture. He placed his hand seductively on the squirrel’s lower back, capitalizing on her vulnerability. To our right, a few couples had staked prime territory near the public restroom, mushing their faces together in a cringe-worthy display of public affection. Fastnacht had come to an end.

New couples made up. German Carnival Costume Tips: When it comes to costumes, I have a theory. Either go all out and buy a premium costume or make your own. Bulk costumes are tacky, expensive, and fall apart anyways. You’ll want to wear something warm but won’t require a lot of hassle to remove or put on (for switching between indoors and outdoors). Though some people have a new costume each day, it’s not a big deal if you end up wearing the same one. It gets manky, but nobody cares. I recommend buying tulle, making a tutu, and pairing it with funky accessories. This is a cheap, easy, and fun way to dress up for Fastnacht.
Getting around: Look for a special Fastnacht ticket, that lets multiple passengers use public transport for a cheap price throughout the whole festival.
Eco-friendly Fastnact: Carry your own flask or cup to refill throughout Fastnacht, so that you don’t waste a plastic one each time you purchase a drink.
Don’t be a dud: Fastnacht is a unique festival that does a great job at bringing out the best side of everyone. Respect the local culture, property, and people.
How to keep your relationship intact: Go easy on the alcohol, have a plan to find each other if you get separated, compromise on activities, and enjoy!