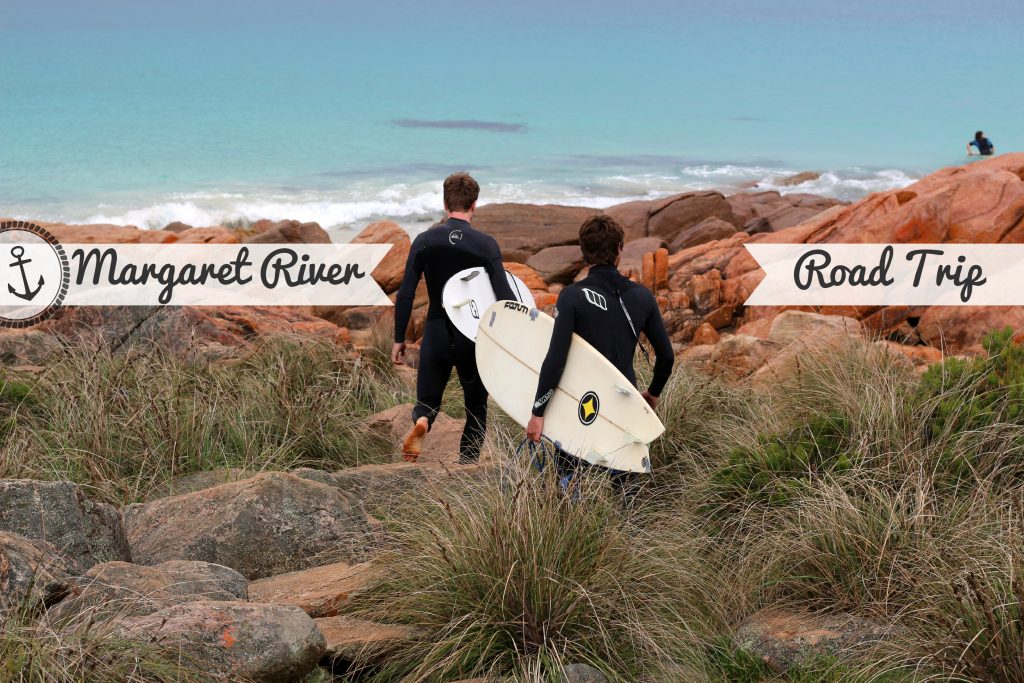 Margaret River is the town in Western Australia that I’m extremely protective over. It’s a special snowflake. It can do no wrong. It has a small-town feel, wildflowers and tall trees, lively farmers markets, a unique culture, and some of the best surf spots in the world. If only there were better job opportunities, Moritz and I would move here before today’s sunset! When we drove into the city as the last stop before going back to Perth, I mentally pumped myself up to show off Margaret River as Western Australia’s pride and joy to our visiting friends, Lukas and Caro. Albany and Pemberton were a hit, but I knew that Margaret River would be the grand slam.

Wanting to be able to experience some of the nightlife – at Margaret River’s only active pub, The Tavern – we camped at a caravan park near the town center. When we arrived, it was raining and the lights of the reception hall were dimmed. A group of backpackers sat out front waiting to be let inside. Once a tattooed man and older woman let us inside, we secured a spot at the caravan park and set up our tents before making a night out on the town. With our warmest gear piled on and a few drinks in hand, we trod through the rain to The Tavern, where we listened to cover songs played by mop headed surfer dudes – and the crowd wasn’t much different. Men outnumbered women 4:1, and almost everyone was wearing some combination of plaid, beards, and beanies. Putting on makeup or wearing a nice shirt is pretentious in a place like this. Fancy ordering a cocktail? That’s très high maintenance. With my running shoes, yoga pants, and sweater, I’d say I fit right in. Caro and I began chatting with a group of bearded Aussies who were keen to have us come to their “bangin’ party.” I pointed to Lukas and Moritz, who instantly moved suspiciously close to one another.

“Can they come too?”

The bearded boys looked skeptically at them.

Lukas and Moritz huddled in even closer together.

Lukas capitalized on his European labeling by exaggerating his German accent when he talked with an Australian girl – despite having a more expansive English vocabulary than her. When she teased him, he retorted with loud jumbled rants. He rambled on in a mix of German-English, confusing her to a point where she stuck her tongue out at him and walked off.

After a few minutes of walking, we arrived at the “banger” of a party. The house was falling apart at the hinges and the carpet and decor looked to be from the 1970s. From the stains spread all throughout the house, it probably hasn’t been cleaned since then, either. This time, males outnumbered females 10:1. The ratio for Caro and I was definitely not in our favor. When we saw a man unsuccessfully hop a fence, faceplant onto the ground and then not move, we asked Moritz and Lukas if they were ready to leave.

Of course they weren’t. They were in dog heaven. Within five minutes of arriving, Moritz hijacked the party’s iPod and began playing bizarre songs and Lukas was just starting to make friends. Meanwhile, Caro and I tried not to touch anything with our bare hands. The boys were disappointed to leave but admitted it wasn’t exactly Party of The Year. Margaret River is populated largely by surfers who work in casual jobs as wine bottle lablers or in the hospitality industry who live their dreams of riding perfect waves everyday… so the male-dominated parties come with the territory.

True to our air mattress luck, ours was flat once we arrived back home. We pumped it up at 3:00 AM in the morning, and the wheezing was so loud that the entire caravan site woke up. One man yelled, “WHAT’S THAT NOISE?!” — notably 10x louder than the pump itself. We yelled back, “OUR MATTRESS IS FLAT!” Whatever sympathy the other campers had for us vanished at that point.

In the morning, we were side-eyed by fellow campers and got out of the area as quickly as possible. Which of course was a good thing, because the more time you can spend on the coast of Margaret River, the better it is. We made our way traveling from beach to beach. From the classic surf spot of South Point, to the untouched beaches of Dunsborough. We walked along silently, collecting shells and tracing lines in the sand. The only footprints on most of the beaches were our own. Margaret River is rarely fully sunny at this time of the year. You’re more likely to see rainbows spreading across the horizon than a cloudless blue sky. I don’t mind this though, it gives the town a misty feel that keeps the sun-worshippers up north and off of Margaret River beaches. We stopped at a beach with tiny, surfable waves near Dunsborough. Moritz and Lukas played with their surfboards in the water, while Caro and I whalewatched from the rocky shore. Eventually, we spotted a mother humpback whale and her calf migrating down to Antarctica for the winter, one of the last whales to head down there for the season. We’d see the baby come and blow water every few minutes, unable to hold her breath as long as her mother. A while later, a park ranger waved at Moritz and Lukas and placed her hand vertically on her forehead — the universal sign for SHARK! In disbelief, Lukas and Moritz scrambled out of the water and onto dry land. Later we’d find out that a shark popped an inflatable kayak just a short distance away with it’s teeth. The men in the kayaks were forced to scamper to shore before the shark came back for seconds. One final picnic, and we were off on our way back home. I always dig my heels at leaving Margaret River, always dreading to go back to Perth’s traffic and small waves.