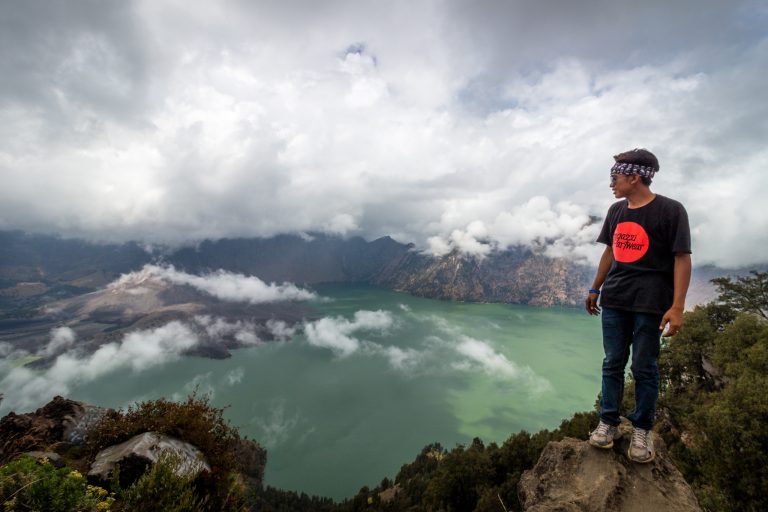 This post continues from Part I and Part II.

“You mouthbreathed the other night. That makes you a mouthbreather,” my tent mate, Noodles, pointed out.

“Lay off, I’m congested… and you snore like crazy,” I snarled.

Another friend in our group pulled out his phone and hit the play button. The sound of throat and nasal tissue flopping together rattled out at a decibel that could startle a hibernating bear.

“My tent buddy snores too, I even got it on record,” he laughed.

After just twenty-four hours of trekking together, all polite barriers came down and the entire group resigned to being their sweaty, snoring, mouth-breathing selves. At this point, we didn’t care. We’d accomplished what we’d come to do – trekking to the summit of Mt. Rinjani, so were pretty content with just cruising from here on out.

We walked through the other side of the crater rim, bordering the lake and arrived at a prime camp spot away from the other trekkers with panoramic views of the lake. Mt Barujari, the miniature volcano inside of the lake erupted just three days after we slept here. One thing I haven’t really mentioned but is obvious in pictures is the massive trash problem that pollutes the area surrounding Mt. Rinjani. Many tour companies dump their plastic alongside the trail, and there are areas where the sides of the trail are covered in not just consumer waste but actual human waste. Though I knew about this issue in general in Indonesia (and have talked about it at length), I was surprised at just how severe it was. Therefore, I only recommend Green Rinjani as the go-to trekking company because they’re mindful of leaving Mt. Rinjani better than they found it. If you go with another, hold them accountable for carrying out all waste.

We dragged our aching legs to the nearby hot springs for some much-needed heat therapy. Locals gathered in small pools of teal and opal. I peeled off my clothes and sunk into the hot, sulfur-laden spring – our first and only bath we’d have the entire trip. I felt immodest in my bikini and cloaked myself in the opaque water. A few porters from another group hopped in with bars of soap, scrubbing themselves clean before continuing their trek to civilization. Their threadbare shorts hung off their hips like a loincloth.

“Jump off the rock with me,” Noodles pressured us. We shook our heads.

“No way! We’re like, a two-day hike from a hospital,” I replied.

He climbed onto the top of a rock and cannon balled into the hot spring. A handful of locals joined him.

Once night came, I squinted up to the ridge of the crater, looking for the glowing lights of hikers preparing to trek to Mt. Rinjani’s summit. Steam rose from the crater’s small volcano, masking most of the trail.

“Apparently, if you walk too close to the volcano, it gets too hot and you have to turn back,” I heard.

I closed my eyes and imagined heat waves hitting my body, walking forward until it seared my skin.

A cold chill blew through the campsite and the porters went under their tent. All eleven of them share just one shelter – a thick mat on the floor with just one A-shaped tarp covering them. They all huddle close together with hardly any blankets, snoring alongside one another and tolerating each other’s gas passing. Every once in a while, their tent would erupt in a fit of giggles. Our yellow tents were lined along the lake. It was too chilly to sit outside, so five of us crawled into one tiny tent to talk nonsense and nosh on Oreos before tucking in for the night. Sleep rarely comes easy for me, even in the best conditions. I have a knack for hearing sounds that aren’t there and obsess over the ones that are. A few months ago, I slept in a squeaky tent and became fixated on making the squeaking stop. I rubbed oil on the poles, partially took down the tent, stuffed toilet paper into my ears, and counted to 500. Nothing could stop the sleep-sabotage.

Empty sleep came easy for me this time, despite the sounds and rustling.

In the morning, we packed up and set off to the top of the crater. The entire hike so far had been a series of steep inclines followed by equally steep declines. Up, down, up, down. My body craved clean clothes and a flat path. After a few hours, we made it to the crater rim and saw the turquoise lake from a new perspective. My aches and pains dissolved. Thick clouds of fog rolled through the terrain, like a magician pulling a blanket over the earth.

Now you see it! We passed through grasslands, steep bridges, and eventually made it to a lush rainforest. When it rained, we took shelter under a tarp and slurped down bowls of warm noodles and boiled eggs.

Despite carrying nearly four or five times the amount of weight we were, the porters sped down the trails with thin flip-flops for shoes.

“Sometimes, it’s easier if you run,” One porter said.

A single file line of porters ran down the trail, banking around the turns at full speed.

One by one, my trekking group followed them. We clung to our backpacks and jogged down, dodging rocks, roots, and other obstacles in our path. The porter was right – it was easier this way! One of my friends in the group, affectionally dubbed “Tumblin’ Terry” after he’d taken a few spills on the trail, loved this method and pretty much ran the rest of the way down back to the base.

Occasionally, we’d hear a large crash up ahead from one of the porters who’d lost his footing. Of course, teasing, laughing, and pointing followed.

We set up camp for our last night in a monkey-overrun rainforest and felt a pang of sadness. After three days of hiking nonstop together, it’d feel strange to go back to flat paths, warm showers, and privacy.

And toilets that are more just a shallow hole.

The next day, Gus and I walked together and relived our trek to the summit. I think he felt that time was running out for him to squeeze in the last few insults, because he turned his insult-game on full blast once we caught up to the rest of the group.

My group cracked up in laughter, and I felt my face flush red.

I put my hand up to stop him.

I raised one finger, “Trip.”

I raised the second finger, “Advisor.”

A few minutes later, away from the pack, Gus shuffled up to me and gave me a quick slug. “You know I’m kidding with you, right?”

(I gave him five stars in the end.)

We crossed the finish line of the trail where local market stalls selling fresh food and cold drinks had been set up. It was surreal to be back in a place where just a dollar could buy you comfort and convenience. To be fair, the entire experience was not a hardcore one when it comes to trekking – skilled porters and a motivating crew make all the difference, but it was still a challenge. I recommend that you trek Mt. Rinjani if you ever make your way to Indonesia. However, be very careful on who you trek with, and realize that you get what you pay for when it comes to guides and porters.

Despite the sweat, the aching legs, and the lighthearted assaults on my appearance, it’s still one of the best things I’ve ever done. You canread a more practical guide on hiking Mt. Rinjani on Skyscanner Australia that tells you what to pack, when to go, and all the otheradvice I’ve saved for the audience over there. If you have any questions, don’t hesitate to shoot over a question or five! Disclosure: I was offered a media rate from Green Rinjani. Had they not accepted my media proposal, I would have gladly paid full price as this is truly the only company I felt comfortable trekking with after researching nearly all others. As always, all opinions are my own.