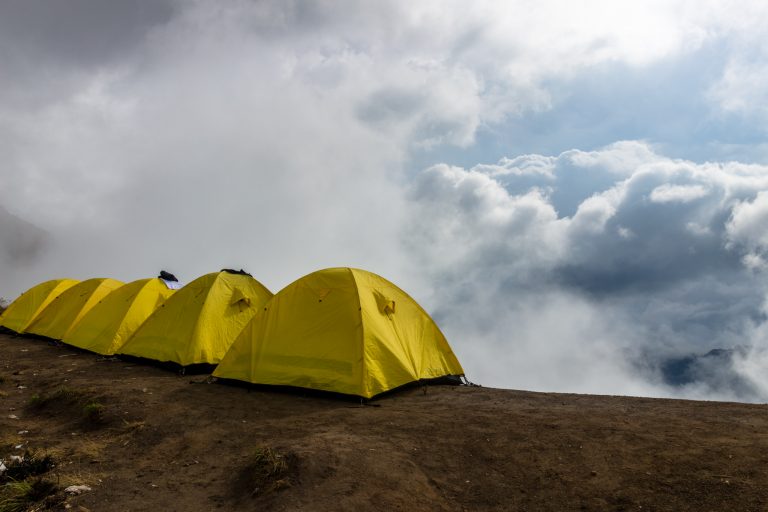 Hiking Mt. Rinjani: The Start of an Incredible Adventure

Sweat pooled around my lower back. I took my backpack off and chucked it onto the ground. Dirt clung to the wet fabric, sticking to it like a magnet.

I craned my neck towards the tip of the mountain. Porters and their hikers weaved through a line of trees, forming a single file line. Where the line ended, I wasn’t sure – the top of the hill hid behind clouds.

“Damn, Indonesians don’t believe in switchbacks, do they?” I said to Reuben, a friend hiking Mt. Rinjani with me. “Whoever made this trail just plowed a line straight to the top.”

I stopped for a moment to catch my breath, inhaling humid air.

Mt. Rinjani is a 3,800-meter-high active volcano on the island of Lombok, adjacent to Bali. Though it’s the third highest peak in all of Indonesia, it’s the hardest to climb. There is one main trail that weaves through the volcano and the crater lake, and it is technically illegal to trek without a local guide.

I shared this masochistic experience with my friend Minneth from Perth, his two friends, and a mother-daughter duo from Switzerland. Together, we’d embark on trekking to the summit of Mt. Rinjani and crossing its crater rim twice.

Earlier that day, we’d met our tour guide, Gus, who would be guiding the tour with another employee named Dana. We also had eight porters, who would be the angels in charge of transporting our goods, feeding us, and sheltering us for the next four days and three nights.
I chose to trek with Green Rinjani because of their strong environmental and safety policies. Unfortunately, tourism to this beautiful volcano has brought a slew of pollution and human waste problems. Many trekking companies simply leave their trash on the mountain – with no waste management system, this really damages the environment.

We started the first day early, fueled up on banana pancakes and cavity-inducing sweet tea. A driver brought us from the headquarters of Green Rinjani to the base of the mountain, where we’d register ourselves for the hike. I heard through the grapevine that the summit was freezing, so I ran to a local stall selling snacks and asked if they sold gloves. They tossed me a grey and tattered pair for 20,000 Rp, the equivalent of $2.

“Terima kasih!” I nodded, and ran back to the group.

The hike began in grasslands, where we passed fly-covered yaks and stepped over their fresh patties. The sun beat down on my scalp and skin, causing beads of sweat to form even though I didn’t feel exerted. Though most of us tried to make small talk in the first hour of the hike, it dwindled as we walked on – learning that most of our energy would have to be conserved for trekking, not socializing.

Many of the porters and guides do this trek up to two times per week, usually wearing only flip flops. Those wearing hiking boots usually acquired them from a trekker as a gift. Many porters have a large callus formed on their shoulders from carrying up to 50 kilograms on their back day in and day out. The staff who trek Rinjani for a living are as tough as hell.

There were tens of other trekkers with various companies making the same journey that we would be. A few hours into the hike, we stopped for a generous lunch of fresh fruit and vegetable fried rice prepared by the porters. I felt a bit uncomfortable with the luxury – doesn’t trekking usually mean slamming down trail mix and boiling instant oats over a flame cooker? At least, that’s what it always has for me.
Three hours ticked by as our group plod up the long dirt trail. Long strides turned into baby steps as the path inclined, and my backpack started to feel like it was filled with lead.

To pass the time, I asked Gus a series of questions.

“Do people ever turn around or get hurt?”

“Yeah. All the time. Maybe one out of three make it to the summit. I had one group walk to the base of the mountain, look up, take a picture, and turn around. Other times, people have broken their ankles – we have to get someone to drive a motorbike up this road to get them. It’s very crazy.”

Despite knowing better, I’ve never been one to hike with proper boots. I throw on my trusty pair of jogging shoes for just about any land-based challenge and it usually works out fine. However, raised tree roots, loose rocks, and bumpy terrain threatened to twist my ankle with every step – made heavier by the weight of my backpack.

I’ve always had a knack for endurance sports, but after five hours of trekking, self-doubt invaded my skull. How much further to the crater? Could I really do this for four days?

Our group stratified, bookended by both tour guides who stayed dutifully ahead and behind the fastest and slowest trekkers, respectively. As we neared the crater rim, fog rolled through and people started taking breaks at a more frequent rate. I was eager to finish the hike, trudging along repeating, a body in motion, stays in motion.

A few hundred meters from the crater rim, a woman nearby started sobbing. I’d spoken to her earlier – her boyfriend proposed a few days before, and they were doing the trek to celebrate their engagement.

I felt awkward and left the consoling to her guide and fiancé.

We broke through the cloud barrier hovering just below the edge of the rim and could see the top.

Finally, my heart pounding through my ears, I made it to the crater rim and immediately was rewarded with a panoramic view of a turquoise lake. The back of my backpack was soaked in sweat. A bodysuit of dust cloaked my skin. My legs shook. I didn’t care. I started laughing and high-fived Reuben, who’d gotten there just moments before.

The porters made it there long before we did and had already set up camp.

Neon colored tents punctuated the skyline. We feasted on a meal of vegetable curry and hot ginger tea. I asked my porters to pour an extra serving of the tea in my metal water bottle, so that I could throw it into my sleeping bag for warmth.

I saw the woman from earlier on the crater rim. This time, she was smiling with pride.

Trekkers from other companies trickled in as the sun teetered above the crater’s edge – rewarding us with color combinations we’d never seen before.

“There will be a really steep, steep on both sides area,” he continued. “If you fall there, the lights go out.”

A few in the group voiced concerns about making it to the summit – pesky health issues crept up early on the first day for some. They contemplated not even attempting.

I pulled Gus aside.

“I have to make it. You need to make sure I get there before sunrise.”

I chugged water and mentally prepared myself to wake up and hike early. My stomach churned with nervousness – aside from personal reasons for wanting to summit before sunrise, I had a lot riding on it workwise. I dreaded penning some sentence like, “I couldn’t do it, but you can!” for a few companies who were interested in buying guides and stories about Mt. Rinjani.

I crawled into my tent that night and wondered what the next few hours would bring. Minneth, my tent mate, slept restlessly, zipping in and out the entire night to take pictures of the stars when he couldn’t sleep. I closed my eyes, hugged my hot water bottle close, and willed my mind to sleep.

Could I make it?

Disclosure: I was offered a media rate from Green Rinjani. Had they not accepted my media proposal, I would have gladly paid full price as this is truly the only company I felt comfortable trekking with after researching nearly all others. As always, all opinions are my own.