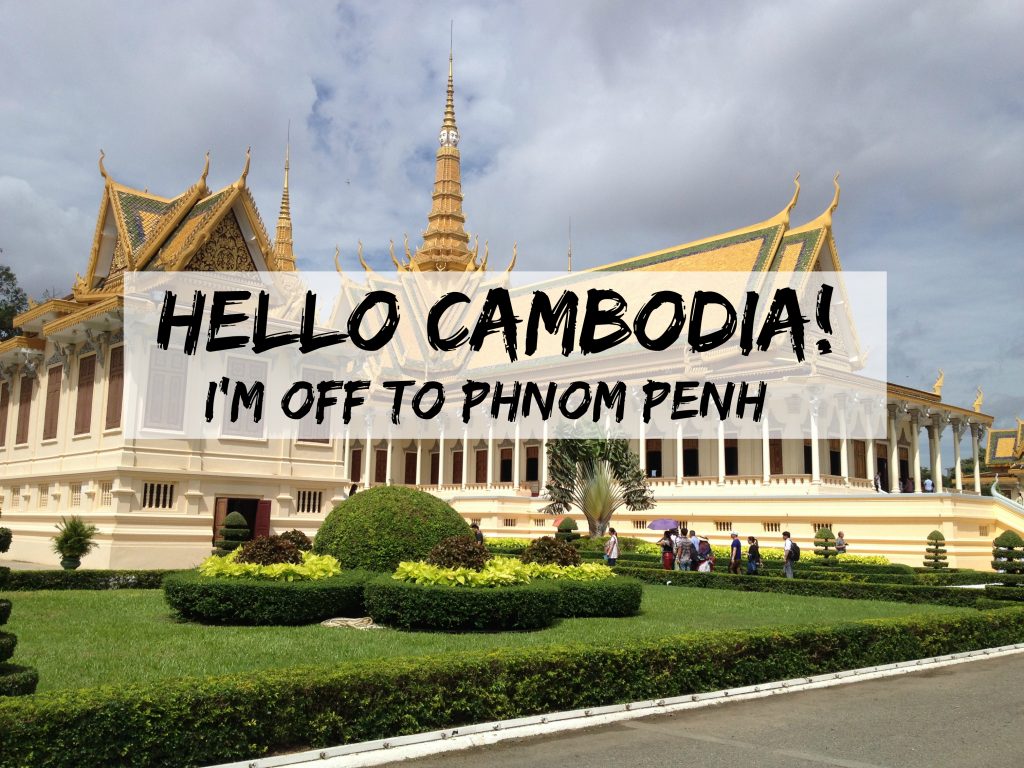 I travel solo often, though it rarely ever feels that way. Usually, I brace myself for noisy hostel lounge rooms, short term friendships formed at bus stops, rogue locals looking to mingle with foreigners, and the inevitable weirdo that always – always –seems to target me as the person to listen to their life story.

Traveling to Phnom Penh, however, I felt alone. Looking out of the plane window, I wondered what I was in for. Consistent with pretty much every trip I go on, I felt massively unprepared. When I went to the airport ATM, the US dollars spit out of the machine were the only thing familiar to me in a country like Cambodia – who does not use their own currency, but crisp green US money instead.  I checked and double checked my luggage locks before leaving the run-down building, uncharacteristically paranoid of my purse getting stolen. There are many horror stories floating around about Cambodia – how it’s changed for the worse, how robberies have increased, and how tourists are no longer seen as friends. As much as I try to bury these whispers in my mind and see things for myself, I worried.

I overpaid for a tuk tuk ride into the city and clutched my bag close, looping the straps underneath my ankles and making fierce eye contact with whoever zoomed by. I remembered stories of drive-by robberies read on the internet. My driver attempted the first scam, telling me that if I wanted a bus ticket to the next town, I’d need to buy it through him because the bus stations were closed. I knew better than to believe him, and told him “No, thanks!” through the mesh enclosing me to prevent thieves from reaching in. The air was humid with a thick layer of smog cloaking the dusty streets and I caught whiffs of garbage every few minutes. People piled entire families, pigs, and goods onto their motorbikes that zipped around without any discernible pattern. It’s funny that to in America, every pair of lovebirds bolt for the nearest SUV dealership as soon as baby #2 is conceived.

“You know, we just needed more space for all of their soccer gear… And with the iPad screens getting bigger and bigger these days, our little darlings need lotttts of room to stretch out their arms!”

I like to imagine these families coming to Southeast Asia and seeing how Cambodians handle babies #2-5.

“Hop on the back, and hold on tight! Don’t let the chicken fall off, or we won’t have anything to eat for dinner!” Spoiler alert: As afraid as I was in those first few moments of being in Phnom Penh, Cambodia would soften my guard over the next following weeks as I got to know the Khmer people.

Overwhelmed by the constant “tuk tuk lady?” and persistent men looking to sell me tours (“We go to the genocide museum, then I take you gun shooting! Sound fun!?” My response, “No. That sounds like a horrific idea.”), I found solitude at the Royal Palace in Phnom Penh, conveniently located just in front of my hostel. Stumbling onto empty and immaculate grounds was an oasis in the midst of sweltering heat and noise. The thick gates and my own thoughts muffled the beeps, shouts, and big-city noise of the outside world. I’ve been hinting at my career change of tossing social work aside and throwing the dice into self-employment. As I clicked my camera shutter, I wondered, am I good enough? Am I smart enough? It’d be so much easier to fold and find a stable job. I had to continually refocus on the ornate architecture and golden Buddha statues of my surroundings. As much as I willed myself to be mindful and take in the scene, it just wasn’t happening. I was too distracted by the question of now what will you do? playing on repeat in my mind. High risk, high reward. Wasn’t that what all of the greats believed? I’m not really the gambling type. I walked past street-side barbers, where tumbleweeds of black hair blew beneath my feet and looked up at children climbing high into the trees – at first thinking they were monkeys! Ladies smiled at me and gestured towards their counterfeit book stalls, and upon flipping through a duplicate guidebook, I realized that some of the pages had been copied upside down. When the women who sell them are toothless and friendly, selling imitation books hardly seemed like a criminal offense. When I saw groups of people playing games on a grass field near the Royal Palace, I thought of my neighborhood in Australia and how I’ve still yet to meet the people who live next door. In Phnom Penh, everyone is constantly socializing, having picnics, or playing games. Tuk tuk drivers cluster together in cliques and chat the day away, giving an enthusiastic wave to tourists without missing a beat in their conversation. Every evening, just before sunset, hundreds (if not thousands) of Phnom Penh Khmers stop what they’re doing and flock to the nearest open arena to workout. Of course, a new friend from the hostel and I had to join in on the fun at the stadium center. Large stereos placed around the stadium boomed to different beats as hundreds of women followed along to their Zumba instructors. Stand in between the groups, and experience a cacophony of sound louder than roaring fans at a sports arena. We joined in, dancing along to the beat and were victims of side-eye glances and stifled giggles from nearby fitness fiends. If I recommend doing only one thing in Phnom Penh, it’s experiencing this. We walked along the edge of the arena and saw that every open area was taken over by athletes. Soccer players to the right, volleyball to the left, and taekwondo happening front and center. Everyone was out for the evening to get a healthy dose of endorphins before settling in for the night.  A group of kids stopped for a second to yell, “What’s your name?” before collapsing into a fit of laughter. The second we told them our names, they nudged one another to step forward and tell us theirs. The air itself vibrated with the combination of shouts, hollers, music, and laughter, creating unity between people in the heart of Cambodia’s largest metropolis. After our half-hearted attempt to workout with the locals, we made our way back to the hostel. The city is dead silent during the morning, but absolutely alive at night. We stopped at a crowded restaurant where the waiters served you fresh food that you grilled on a personal barbecue yourself. I had trouble stuffing heaping piles of fresh vegetables into my own personal soup pot. Already, I started to get a feeling that Cambodians truly appreciate any business you give them. The waiters were overly attentive, often asking us if we liked our bread “really toasted, or just a little bit?” They constantly hovered around, clearing plates instantly in a way that makes even Southern Hospitality look DMV customer service. Phnom Penh, Cambodia. There’s so much more I want to tell you, but I can’t get ahead of myself. Just know that even after the first day, I loved the people and the country’s complexities. Cambodia uses American dollars as their currency. Cambodian riel is only used for small change. Keep this in mind when taking out money.

Aura Thematic Hostel: Clean, new, cheap, safe, and has super friendly staff who are always available for a chat. I highly recommend staying in this hostel. It’s located behind the Royal Palace, walking distance to all of the main attractions in Phnom Penh. Breakfast is included in the price and there’s a rooftop bar perfect for relaxing or socializing when the mood strikes. I had a 4 bedroom dorm room for US 8$/night.

Transportation: You’ll soon learn that tuk tuk drivers are everywhere and easy to find. Personally, I love them. They will offer rides around town for US $2/ride, or you can rent them for the entire day to see the main attractions for US $15/per day.

I took the Giant Ibis night bus that leaves to Siem Reap. It’s very clean, has wifi in some areas, and I recommend that you book a bed that is in the single row to avoid awkwardly sleeping next to a stranger. The bus was clean and felt very safe to sleep in – loop personal belongings around your body and be sure to take a lock for an extra precaution.

If you want to read more about Phnom Penh, check out Travel Lush – she lives there full time and knows all of the best spots.