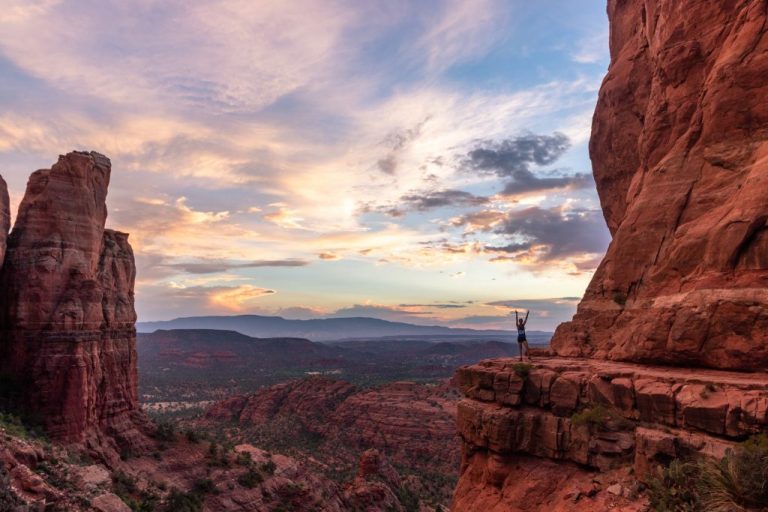 Cathedral Rock is a captivating rock with views in all directions once you make it to the top. The Cathedral Rock hike climb offers enough of a challenge to keep it interesting, and you’ll want plenty of time to admire the Mars-like landscape from above. This hike in Sedona is one of the most beloved trails for a reason.

Difficulty: The Cathedral Rock hike starts off nice and easy but quickly becomes quite steep with a short hand-over-foot scramble towards the end. Don’t let the distance fool you, you’ll want to wear sturdy shoes and opt for a backpack to keep your hands free for climbing. There is no shade on the trail.

Time: Budget 40 minutes to an hour for the hike itself, more if you plan to stop for a snack and photos up top.

Before you go: Like most major hikes around Sedona, Cathedral Rock can get quite crowded. Go at sunrise or sunset to avoid the midday crowds. As a bonus, expect to be mesmerized as the sun throws ember-like hues across the landscape. A camera is a must. Parking can be a challenge at Cathedral Rock, so plan for some extra time to find a spot. There is a basic bathroom in the parking area.

If you opt for sunrise, you might be able to see hot air balloons rising in the distance.

Read: The Best Things to do in Sedona, Arizona

What is the Cathedral Rock Vortex?: One reason Cathedral Rock in Sedona is so popular is because of its supposed energy vortex, a spot where the earth’s energy spirals above its surface. This vortex is at the intersection of Oak Creek and Cathedral Rock, called Red Rock Crossing. Those who believe in vortexes claim it has a feminine energy and that visitors should expect to leave feeling creative and rested.

Red Rock Crossing is a sacred site for Native Americans, as legends state that this area was once the birthplace for gods and mankind. Some legends also state that the gods reside in Cathedral Rock.

How to Get to the Cathedral Rock Trailhead

From Highway 179, turn west onto Back O Beyond Road, directly across from Indian Cliffs Road. Drive for .7 miles until you reach the Cathedral Rock parking lot. A small “Cathedral Rock Trailhead” sign can be seen from the road.

You can also hike to the top of Cathedral Rock from the Baldwin Trailhead. This adds an extra two miles total to your trip.

“Yeah, it can’t be that hard…” my friend and I mused. With the sun quickly falling below the horizon, we raced to Cathedral Rock in hope of seeing the sunset from Cathedral Rock’s viewpoint, a platform tucked between the rock’s steeples.

The pathway started off narrow, marked by rock cairns. It led us between plots of cacti until we came to the base of Cathedral Rock, a red rock with tiers of rust sandstone. We wiggled our way up cracks in the rock and climbed on all fours to make it over a handful of the more challenging sections.

The rush of the sun urging us to make it to the top before it bid adieu for the night plus the fun scrambling sections of the trail added to our adrenaline.

In the distance, other red rocks changed from brick to scarlet to fiery orange as the minutes ticked by, with shadows stretching further beyond their bases. The scene changed each time I looked behind my shoulder.

We reached the top plateau just seconds after the sun went down. The cloud-speckled sky danced between the frame of the Cathedral Rock’s peaks. We wandered around the plateau, admiring the view from a new perspective with each step.

Some parts of the trail are intimidating, but are possible if you take your time. I’ve heard reports of people getting help from others on the trail–so don’t be shy about asking for a helping hand or a boost up one of the steeper crags.

Because it was so late in the day, there were few other climbers on the trail aside from us. After a few minutes, we nearly had Cathedral Rock to ourselves.

It’s interesting that this region has so many nods to mysticism and religion. The rock itself is named after a structure for worship, and the area itself is thought to be the birthplace of deities and man alike among ancient Native American tribes. New-age mystics claim that the area is the site of an energy vortex. No matter your beliefs in outer-worldly spirits, Cathedral Rock is certainly a place that will make you feel magic in some sense while sitting on its plateau. I awed at the fact that I could admire the sun from a stack of sediment placed in Sedona millions of years ago, whittled away by a receding sea.

The steep descent back to the parking lot pulled us away from the top. We scooted and clamored on all fours, taking our time.

Cathedral Rock in Sedona is easily one of my favorite hikes in the world. Even better, it’s a short hike with a major reward awaiting at each section. You’re sure to leave feeling accomplished and in awe of what nature can create with a bit of water, a bit of land, and millions of years of erosion. If you like this hike, you’ll also love the Devil’s Bridge hike in Sedona.