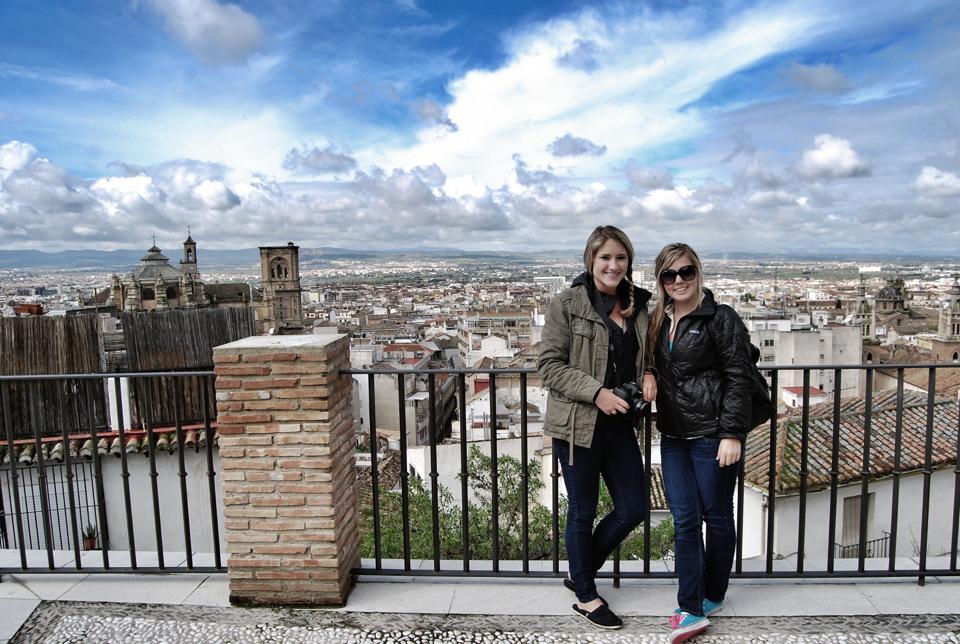 For the record, the title of this post was inspired by this video – Granada’s parody of Gangnam Style. I suggest watching it if you have a lot of time on your hands and have a high tolerance for irritable youtube videos.

Lauren and I arrived in Granada and checked into Hostel Oasis since we had a good experience at the one in Seville. It was nestled in between the Arabic shops near the city’s main road.

Overall, the hostel was not nearly as good as the one in Seville but still a decent place to sleep for the night. We shared the room with three German boys and a Canadian girl who had an excessive amount of eggs and kept trying to boil them in a thermos. Every once in a while, sometimes mid sentence, she’d open the canister and sniff to see if the eggs were boiled.

She cracked one open on the bed. I saw orange spill out of the corner of my eye.

She slurped up the remnants.

In the morning, we did one of the free walking tours offered by the hostel. Expecting a dazzling performance, like I had with our tour guide in Seville, Lauren and I eagerly joined the tour.

This tour guide was unfortunately mediocre at best. He would take us to an amazing spot, light a cigarette, point off in the distance and essentially say, “Here’s some cool shit.”

Later in the day, we went on yet another tour guide who had lived in the gypsy caves behind the city and offered to show us the caves along with some of the street art. This sounded ideal for me — and while he wasn’t the best guide either, we walked through what would become my most favorite and most revisited part of Granada.

Yearning to get out of hostel-life, we met up with our next couchsurfing host and ate some tapas. He is really interested in Asian culture and introduced us to some anime films. It felt like I was experience a taste of a new culture in a new culture… You get the idea. Did I mention he was Bulgarian?

The next day, Lauren and I sat inside one of the cathedrals for a bit. My family is split into various forms of Christianity (Catholic, Mormon, and nondenominational) so I always feel at peace within temples and cathedrals. This experience was so much more fulfilling than the one I had at the basilica in Paris – no tourists, no sounds of coins dropping, no flash photography. The only sound echoing through the great space were voices praying the rosary.

Our host had gone to a Japanese convention and the convention goers were meeting at a tapas bar afterward. Lauren and I met him there to see if we could meet some new people.

We noticed our host staring at a beautiful girl with silky long black hair at another table. He told me he liked Asian girls, and I told him to go talk to her. Shyly, he refused and gave me no other choice than to force him into talking to her.

I wrote on a paper, “For a good time call *host*” with his number scrawled on the bottom.

“I’m going to give this to her and point to you if you don’t go over there.”

He beelined to the table and immediately began chatting with her. Sometimes forceful humiliation is necessary I suppose.

Later that night he hugged us – he had obtained her number and exclaimed, “I love the American way of dating!”

The next day, Lauren and I decided to run the cave trails. You would have thought we were running in a marathon. Everywhere we went, people hollered and cheered for us. If this happened in California, I’d be in phenomenal shape. Nothing like a city full of personal motivators to keep you moving!

In the evening, we reunited with one of our newly acquired Australian friends that we met in Seville. We decided that in the morning, we would take a bus to a small beach town called Salobrena.

Lauren and I don’t do well with resisting cravings, and his description of this magical candy sparked a twinkle in our eye and a a desire to do whatever it took ITALICS to get our hands on a Kinder Bar. I envisioned myself taking a bite and floating in clouds, exceptionally delighted.

We scoured the streets for an open candy shop, but the town remained sleepy. We eventually found a small junk food stand.

Lauren and I began chewing.

We ate the whole bar quite fast. We didn’t want to disappoint our Kinder-Obsessed-Aussie, but the experience was anticlimactic. The chocolate tasted like any other waxy cheap chocolate, except it had a mysteriously tasteless white substance inside.

Back in Granada, we met our next host. Our host and one of his friends took us to a few tapas bars and introduced us to futbolin, which is essentially a more intense version of foosball. Our first game was guiries (tourists) vs locals. The guiries lost miserably. Lauren and I decided to split up and paired up with the pros.  Apparently, we broke a copious amount of rules but the pros let it slide. With each point, everyone became more competitive. Lauren and I were jumping up and down at the end… Sometimes forgetting to tend to our futbolin men. From this point on, we were obsessed. Lauren and her partner won this round… But I would be back for a rematch later.

We met his family, who had moved to Spain from Argentina and the house was packed full. The family immediately welcomed us with huge smiles on their faces, and Lauren and I immediately felt at home. They had a dog named Pipo, who I mistakenly thought was named “People.”

Every time the dog would come up to me, I would sing, “People all over the world! Join in… Start a love train, a love train!”

After learning his real name, the song morphed into “Pipo all over the world…!”

I woke up, put on a dress and sunglasses and asked our host, “Do I look like a guiry?”

I took off my sunglasses. “Now?”

“Yes! No matter what you do, you will always look like a guiry. You will live and die a guiry!”

My quest for Spanish authenticity became futile. I slipped my sunglasses back on before we all went to do the most guiry thing in all of Granada – visit the palace, the Alhambra.

We walked up the streets to the palace and I snickered at the dweeby looking guiry tourists. I felt superior knowing that walking with a local somehow gave us legitimacy. Was my money belt showing through my dress? Oh well, at least I knew not to take the plants that the gypsy women offered us (and at one point, shoved down Lauren’s top).

After Alhambra, we took our host to a hole we had found in a wall and crawled through earlier. It overlooked the entire city and reminded me of a place like this at home.

Lauren and I went to see a 6 Euro flamenco show in a cave.  I couldn’t remember the name of the place, and only remembered the logo. Apparently my logo memory isn’t the best because I told everyone we were watching a show at, “El Sucio Ratton.” Which translates into, “The Dirty Rat.” Confused and disgusted, those that we told would wince and say, “El Sucio Ratton? I’ve never heard of that.”

Turns out the show was at Le Chien Andalou – The Andalusian Dog.

I have mixed feelings about our experience – while it was only 6 Euro, and you generally get what you pay for, there was about fifteen minutes of dancing and thirty minutes of singing in the ninety minute long show. Regardless, it was an experience worth having and I suppose if you’re on a tight budget, like me, it’s better to see a cheap flamenco show than none at all.

The crowd was interesting. A French middle-aged couple sat next to us. Every time the singer screamed in his flamenco song, she would recoil in shock and horror. I understand that if you’ve never heard flamenco music, the screams may be alarming at first. But after his twelfth scream, my only thought was, get it together lady!!!

The rest of our trip was completed with more futbolin (which I decided to rename my team to Los Sucios Rattons), more tapas, more friend-making, and more guiry moments.

We were sad to leave Granada – it was a place that grew on me due to its people (and yes, Pipo too).

Stuck reading in California? Check out my post on curing San Diego boredom here. Or… about how little kids took over my life here.