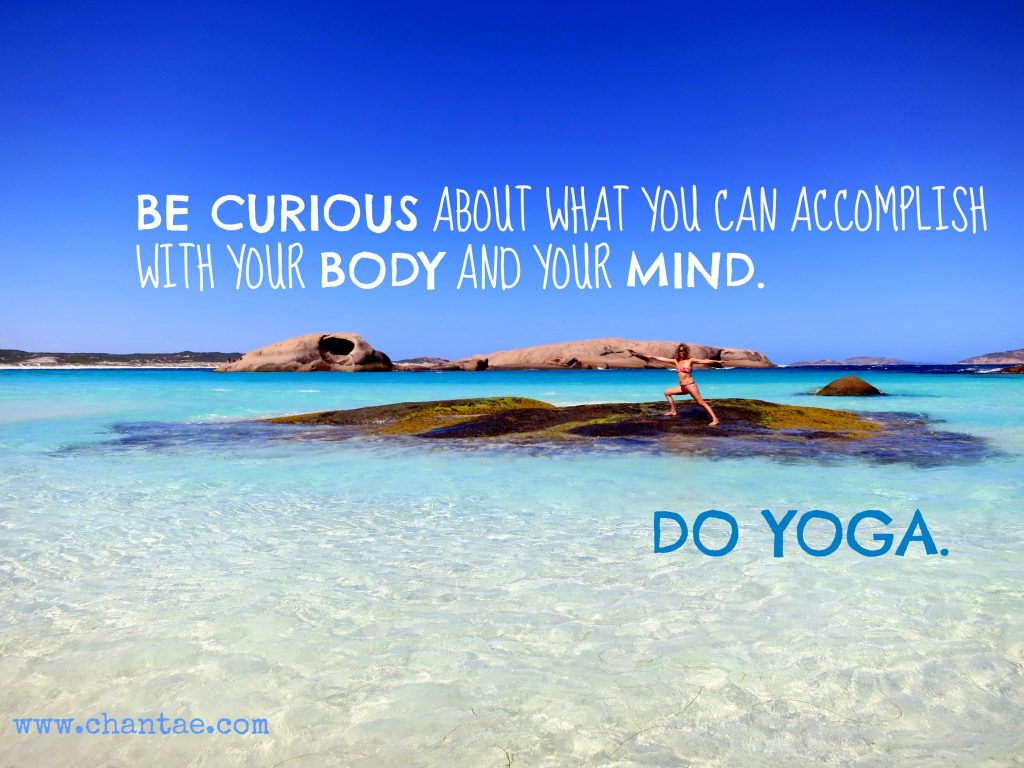 My relationship with yoga has been a tumultuous one, mostly because I’ve always been horrifically inflexible. I know that flexibility is not the goal of yoga, but when you can barely touch your shins, let alone ever getting near your toes, you start to think well maybe I should just invest my time in something where I can see progress…

Even as a child, I was strangely stiff. Kicking a ball was considered a triumph – who knew I could lift my leg a whole foot off the ground!

Fast forward to adulthood, where I dabbled in a few university yoga classes and went occasionally with my mom. I’d leave feeling frustrated and stressed, certain that my wrists would never recover from baring the weight of the rest of my body during downward dog.

Finally, my more relaxed-natured boyfriend dragged me to free community yoga classes, where I began to enjoy yoga and my practice blossomed. Now, yoga is a part of my daily life whether or not I’m on the road. Like most people with a bank account and access to internet, I went through a Groupon/LivingSocial phase. A great deal on a month of Bikram Yoga sprung up, and I jumped at the opportunity to have an unlimited flow of classes.

Bikram is a type of yoga practiced in 104(F)/40(C) degree heat and goes through a series of 26 consistent postures with two breathing techniques. Bikram Chourdhury, the creator, has franchised this practice and demands that all Bikram Yoga facilities follow the same series of postures so that a student can go from one studio to the next and expect the same class.

I arrived at my first class unprepared. Knowing that it would be hot, but not much else. I was stunned when the teacher stood on a podium and began barking commands, even chastising someone for taking a sip of water before the first allotted water break. It felt more like a Richard Simmons led calisthenics class than a calming yoga session. At one point, I mentally prepared myself to do jumping jacks.

I reflected after each class and ran through my personal list of pros-and-cons. The repetitive nature of the class became boring to me, but I enjoyed the clear verbal direction that the teachers gave. Still, I figured that after a few classes, I would surely get the hang of it and experience the “Bikram Glow” that my fellow Bikram yogis had been talking about. It’s changed the lives and health of many people who practice this form of yoga – what made me any different?

After a few sessions, I left feeling indeed energized and more limber. But, I’ve felt this way after a body pump or other similar fitness class at the gym. The main ingredient – feeling the unification of my body and mind – just wasn’t there. The point of yoga to me had been missed completely.

Then I learned more about the background of Bikram Yoga.

The first fact I’d read about the founder was that he was a former competitive yoga champion. What? Competitive yoga – that has to be an oxymoron, right? And after reading that the founder has sexual harassment (including four instances of rape) cases pending against him, and watching him show off his luxury car collection, I felt unsettled putting my money in the pocket of a person who seems to go against the basic principles of yoga. The more articles and videos I uncovered, the more instances of exploitation of women turned up.

Watching an interview with him from ABC, I was shocked.

“Women likes me, I have to run city after city. Country after country. All my life to stay away from the women.”

When asked about the ‘rumors’ about inappropriate contact with students, he said, “It’s [expletive]. Every woman loves me. President’s daughter… Prime Minister’s daughter… you know, billionaires daughter, superstar, actress, actors, singers… But, yogi supposed to be yogi. They cannot involve with women.”

In his classes, he says during eagle pose, “You can have marathon sex. 72 hours nonstop. This is called natural Viagra… One woman, I make her [expletive] 42 times in one night.”

Hmm, what happened to your ‘yogi supposed to be yogi’ mantra?

When interviewed by a Details journalist, Clancy Martin, who asks if Bikram sleeps with his students, Bikram responds, “Only when they give me no choice! If they say to me, ‘Boss, you must [expletive] me or I will kill myself,’ then I do it! Think if I don’t! The karma!”

When Martin asks him about spiritual growth, Bikram replies, “You Westerners are like spiritual babies… you were born in the wrong country, with the wrong skin color, in the wrong culture. You can never be spiritual! It is not your fault. I’m sorry about that. If you can even get the body right, that much is good enough for you!”

He also has created his yoga practice into a franchise – and attempted to copyright the sequence of postures! That’s as if Arnold Schwarzenegger did 5 lunges, 10 bench presses, and 20 sit ups and said “OK, that’s the Schwarzenegger workout – nobody copy it without paying me!”

Nobody take that workout by the way, I’m in the process of owning it.

Bikram is trying to own a Hindu practice that is thousands of years old!

A lot of this information is old news, but like I said earlier, I’ve recently come across yoga as a stronghold in my life.

So, I left Bikram Yoga and found another studio. A tiny one that practices multiple types of yoga – there is a class that fits the needs of every student. Sometimes we meditate, sometimes we simply focus on the postures, but every class is different and filled with peace and enjoyment. They even have heated yoga! Gone are the days were I have to run through a list of pros and cons after leaving a class, because at this studio it simply feels right. I can relax knowing that my money isn’t funding a misogynist’s Rolls Royce collection.

I encourage other’s to try Bikram Yoga and see for themselves how it makes them feel. The money you spend on a class goes more towards innocent and passionate yoga teachers than it does towards Bikram himself, but I simply couldn’t separate the studio and the founder in my heart – especially when they are other alternatives for those who love the heat.