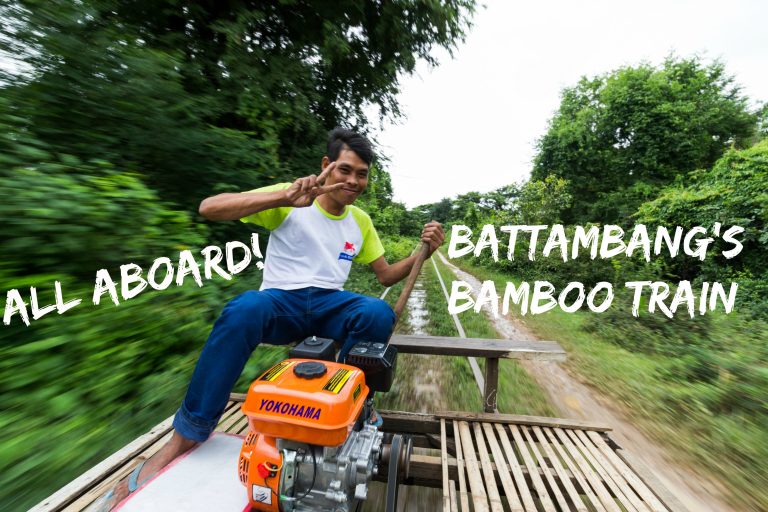 Going for a Ride on the Battambang Bamboo Train

When I was a kid, my mom tried to deter my sister and I from begging for carnival rides by telling us that they were built by drunk, lazy men who don’t like to read instructions. I imagined bearded, potbellied men rummaging around a pile of beer bottles, sweat stained instruction manuals, and spare bolts in search for Dumbo’s metallic tail. This argument usually came before our demands of cotton candy and just after we’d shaken her for all of her spare change. Little did she know that – to us – imagining ourselves on a ride that spurt out screws and bolts with every turn only stoked our desire for life-threatening adventure.

Eventually, the nonstop begging would wear my mom down and she’d hand over her credit card like a white flag of surrender. We’d sprint to the ATM and take out enough money for at least five death-defying rides. While most kids wet themselves over the rollercoaster, my sister and I experienced a maniacal thrill at riding the slow, steady Ferris Wheel, knowing sinisterly that it could crumble under us at any second.

So, over fifteen years later when I found myself sitting in the lobby of my Battambang hotel, I was stunned by an advertisement that stirred up the same feelings I had at the carnival as a kid.

“Bamboo Train (Nory) Ride: a unique fun ride that breaks all transport regulations in Europe and America! Be forewarned: do not try it back home!” One mother’s deterrent strategy is another man’s marketing campaign.

I hopped on the back of a motorbike, and commanded my tour guide to take me to this supposedly-dangerous bamboo nory.

The train tracks once connected the major cities of Cambodia, but were destroyed during the Khmer Rouge regime. In Battambang, crafty locals assembled carriages by laying a bamboo platform on two metal wheel axles. The contraption is powered by a lawn-mower motor and propelled forward at a single speed.

Often, when two bamboo carriages are headed towards each other, it results in a game of chicken. One bamboo train must completely stop, disassemble, let the other carriage pass, and reassemble to keep going.

At 30mph (50kmh), the Bamboo Train is not exactly a ride for the skittish. Rickety quick, we zoomed and thumped along the Battambang countryside – passing stray cows and groups of playing children along the way. We crossed unstable bridges and I was wacked every-so-often by a too-long tree branch. At the end of the track, we stopped at a village where I was persuaded into buying a sticky-sweet Sprite. Three women surrounded me and asked if I wanted a shirt? Bracelet? Scarf? Shaking my head “no,” I insisted on talking to them about their personal lives. How many kids do you have? When is your baby due? How many tourists have been here today? With no other customers to harass, the women softened their sales pitch and answered my questions. Then, seemingly out of nowhere, a large group of people started clamoring onto my bamboo train. The driver waved me over and gestured for me to sit in front. Of course, I had to take a few selfies with my train mates – to which one of them yelled, “One picture! One dollar!” “Oh, you want to pay me a dollar for this picture? That is SO nice!” I yelled back. A few people giggled and we made our way back to the track’s beginning.

All bad jokes aside, the majority of stories I’ve read about riding the Battambang Bamboo Train have been either very naïve or negative (or both). First, the ride is extremely pricey considering that this is Cambodia. To put it in perspective, this 30-minute ride cost $5 whereas a full 8-hour tour with snacks and a guide runs around $15-20. At the end of the ride, locals approach you and insist that you spend $1 on a drink or buy a scarf. Finally, on your way back, you are hustled to give your driver a tip. All up, it isn’t a lot of money for the visiting foreigner but the prices are sky-high for Cambodia.

And this is where things get tricky.

Many people dislike the Bamboo Train because of the hustling involved. Some travelers have opted to stop the ride early and avoid the village. Others have refused to buy a product and/or ignored the tip demands. Most, like myself, gave in to purchasing a drink and tipping the driver at the end.

I think every traveler has left the Bamboo Train experience with a churning in their gut. You feel selfish, greedy, and acutely aware of your privilege as a camera-toting foreigner. Yet you still walk away with an inkling that you’ve been scammed. The problem lies in that you believe you’re onboard for a mindless, fun, cultural ride, and aren’t expecting to be bombarded with all of this inner and outer conflict. It’s like enjoying a funny cartoon and having the cartoon character look you in the eyes and start talking about politics. It’s just not what you signed up for.

Chewing on the topic, I have a hard time pinpointing what is wrong with Cambodians shaking a tourist for a few spare bucks. Isn’t that what happens every time we go somewhere for mindless entertainment? At football games, movies, and concerts we’re expected to overpay for popcorn and to tip the waitress who doesn’t even make eye contact. Why should Cambodian entertainment be any different? Perhaps we hate it because Cambodians are more insistent, outright demanding the same money that’s implied in American entertainment and dedicated tip sections of receipts.

Above all, the Cambodians who work with the bamboo trains have capitalized on thrill-seeking foreigners looking for a ride that doesn’t “fit any transport regulations” back home. With rampant poverty, illiteracy, and water-borne illness plaguing the country, I say there are better things to worry about than handing over $2 more than you expected to the people who need it more than you do.

What do you think about this? Would you hop aboard the Bamboo Train?