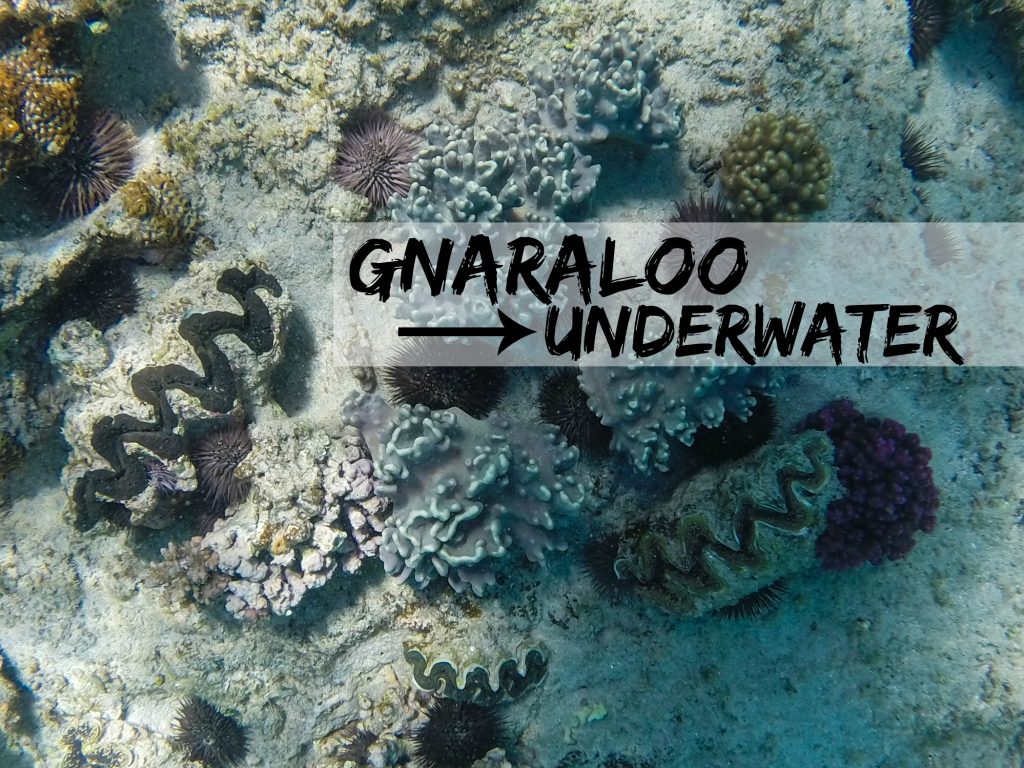 Gnaraloo, Western Australia from the Water

I like when the sun burns white dots into the inside of my eyelids, like the marks left by extinguished cigarettes. It’s as if the sun has seared itself into my memory along with all the moments that happened underneath it. Last week, I showed you Red Bluff from the two-legged landloper’s perspective. Today, it’s time to jump into the water and see what happens when you grab a board or a pair of fins and leave the shore behind. The Great Barrier Reef often steals the spotlight of being Australia’s premier snorkeling and diving destination, but the Ningaloo Reef on Australia’s west coast is actually more accessible and just as stunning. UNESCO even named it a World Heritage site in 2011. This fringe reef is responsible for long waves, electric colored corals, and epic amounts of sea life. It’s what makes the region an ideal place to surf and dive. Remember how I told you about how much I hate surfing over shallow reef?

This fear hung over me as we drove to Gnaraloo. Our friend looked over and said, “You guys are going to love surfing at Tombstones!” I stared at the window and wondered how the place got such a happy-go-lucky name. The best waves in the area break over shallow reef, where oftentimes you have to paddle through currents and crevices to avoid getting splattered against the urchins lurking in every nook.

When I was in high school, a boy on my dive team did a back flip and landed back onto the diving board. The skin from his feet hung off of the board in two strips like paper party streamers.

That’s how I envisioned myself after going for a surf up here, with my body in tassels of flesh across the reef.

Once we got to the Red Bluff and the sheer remoteness of the place sunk in, something switched inside of me. I felt completely out of control. With no cell phone service, no doctors, and access to a 4-wheel-drive needed to get to me in case of emergency, I realized that if something was going to happen, I’d just have to let it. I reminded myself of a Balinese taxi driver, who once told me “when it’s time to go, the gods will decide” after revealing that his neighbor died from a falling coconut. Morbid thought, yet comforting at the same time.

So, while I’d usually cower in a corner at the thought of surfing over shallow and sharp places, relinquishing control convinced me to give it a go.

Red Bluff is a quick left hand wave that acts as a barrel machine under the right conditions. Fortunately for myself – unfortunately for many others – our first day at Red Bluff provided some small waves ideal for those who are skittish surfers. To access the break, you have to launch yourself off of a keyhole in the reef and paddle to the waves. In actuality it’s easy, but timing your jump perfectly in between waves is daunting. Luckily, the waves were small and sweet and served as a perfect introduction to the rest of the week — when the swell picked up. From the sea, you can see surfers making the long trek with their board under-arm to the edge of the cliff, where they climb down gracefully to avoid board dings. When I closed my eyes after spending just a day at Red Bluff, I saw whales breaching and coming up for air. Turtles is certainly not the most accessible break in Western Australia. An unmarked road followed by a steep and sandy hill means you have to gun your 4×4 up a sandy hill to get to the waves. It takes dedication and horsepower combined with a bit of insider knowledge to find. If shallow reef is my kryptonite, reef-booties are my antidote. The second I pull the rubber slippers over my heels, I instantly feel impenetrable – as if my entire body is covered in bulletproof armor and not thin neoprene over an even thinner layer of skin like I actually am. With booties on, the urchins infestation is more of a minor inconvenience, like chewing gum sitting on a hot sidewalk.  I paddled out through the current and sat on the shoulder of the break for a few minutes, watching and learning from those less fearful. When I caught my first wave, it looked like I was looking down into an aquarium. Under the aqua water, hues of oranges, purples, and greens flashed beneath my board. My fears of falling or getting hurt retreated behind a new feeling of bliss and awe of how incredible the entire place is. After my second wave, I was hooked and knew I’d be surfing whenever I could on this trip. Every half an hour, a huge set would come through, forcing me to paddle wide to avoid getting smashed. I was caught on the inside of the waves after one of these sets and scraped my finger against the reef — adding another scar to my quickly growing repertoire. Every time I dry off from a shower, I scan through my most obvious scars and remember how I’ve gotten them. The scars on my toes are from the reefs of Kalbarri. The top of my foot is from Yanchep. My knee is from Newport Beach. My finger is from Turtles. (Since this trip, I’ve even added another – the scar on my wrist is from last weekend at Lancelin.)

“Scars are the tattoos of fun people!” Moira, the friend who invited us on this trip, consoled me.

That wave was worth the blemish. Thanks to the fun feeling of gliding over clear water, it upped my confidence level to tackle waves for the rest of the week.

When I closed my eyes that night, I saw red star-fish lounging in shallow water. Friendly? Inviting? Safe? None of these words come to mind when I heard the name of the break, Tombstones. Don’t get me wrong – I can handle a bit of pain but I’m not a damn masochist. Theoretically, the name is taken from a jutting rock that resembles the look of a tombstone. This eased my mind a little bit, until an older lady came up to me and said, “There was a great white shark out there yesterday! It was hunting one of the whales… came reeeeal close to the surfers. Everyone left the water! Well, except Steve. Steve had a great time being the only one out.” Sharks, sketchy names, long paddle out… I couldn’t be more enthusiastic about jumping in and getting one of these long lefts for myself.  On one of the wave guides, dangers listed are “urchins, sharks, rips, and rocks.” It also advises, “Be careful surfing there because the reef is real sharp and many injuries have happened there… like my dads mate who punctured a lung and broke his ribs.” It ends with, “The reef is shallow so don’t get caught on the inside.”

With such a long paddle-out, anyone who’d caught a wave would be gone for the next ten minutes until they could paddle back again. I caught my first wave and it felt like I was on for minutes – not seconds – I only jumped off when I realized that the longer I rode, the further I would have to paddle. We saw the same faces as the previous few days, with everyone cheering and whooping for those who’d managed to nab one of the big ones. When the wind kicked in and my burning arms felt like they couldn’t possibly move one more inch, I caught one final wave on the inside. In the span of a few seconds, the endless left took me over a massive stretch of reef all the way to shore, where it deposited me exactly at the exit. Since the current is so strong, you paddle out a few meters south of where you end. Under the tombstone, you climb up a rope to take you back to the safety of shore.

Walking a few hundred meters south, Moira and I let the current carry us north with our snorkels as if we were in a lazy river. At many points, the reef gets extremely shallow – forcing us to simply float at the surface. When I closed my eyes that night, I saw electric blue fish swimming through my thoughts.

Never have I met a fish so loyal. After snorkeling for a half an hour, the little white cleaner fish never left my side. We swam through bombies of blue coral together, met a lazy turtle together, and even joined another school of fish together. He followed me all the way to shore until his gills prevented him from joining me on the beach, sending him back to find another companion. Flat and calm, Gnaraloo Bay hosts still waters ideal for kitesurfing and snorkeling. Except for a German tourist with a silver swimming cap and a kite, we were the only ones in the water. Sometimes, when I find something special, I want to share that moment with everyone in the world. I want to point to all of the life taking place underwater and demand that they recognize the magic. Uniquely untouched, Gnaraloo is an adventure both from the shore and from the sea. Getting there isn’t easy, but it’s worth it when you do.