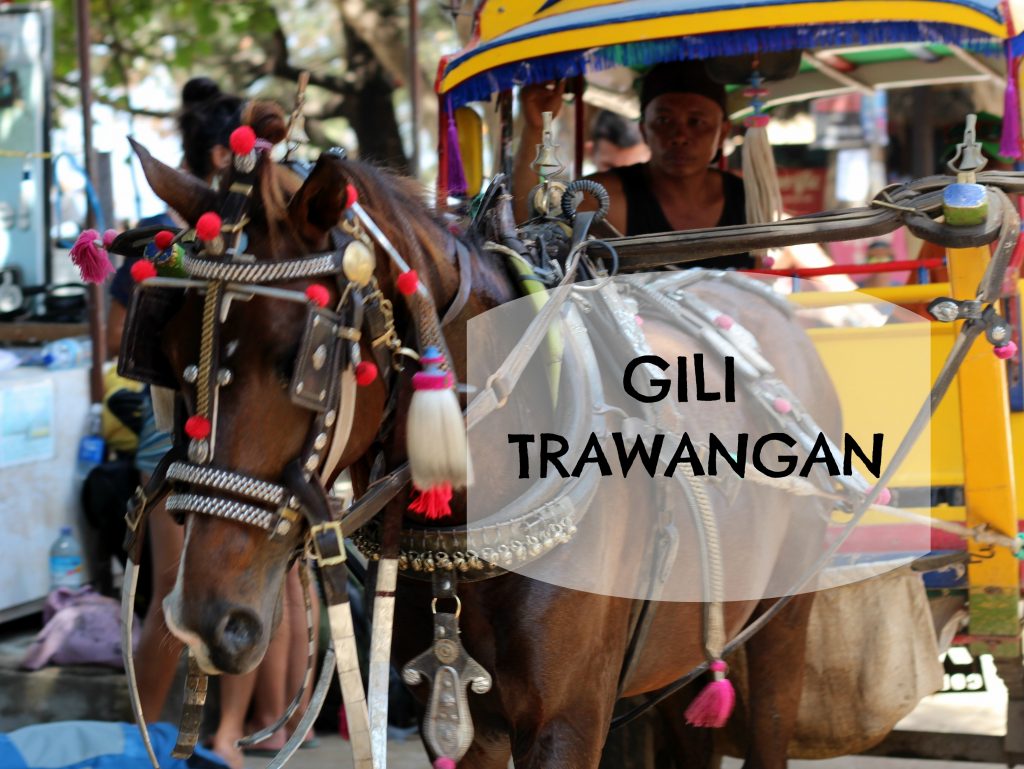 Gili Trawangan isn’t on the radar of great Indonesian surf spots, so when the stars aligned to bring the biggest swell of our entire trip, Moritz and I knew that this was a good omen of the days to come. “Maybe in another life, we can be marry together,” a 15 year old Indonesian cooed, as he slid me a cold Bintang across the bar.

“Girls from your countries don’t like a man like me.” He rambled, “tall, dark, and handsome is a lie!”

I attempted to console my whimpering underage bartender (hey, at least you have 2 out of 3!) while keeping an eye on my boyfriend, who’d just experienced one of the biggest wipe-outs of his life. Eventually, I felt too uncomfortable around my next-life husband and rode my bike around the island… Only returning to check that Moritz was still alive.

Sure, he was bleeding. But he was still alive. Our journey from Kuta, Lombok to Gili Trawangan was anything but smooth. When we took the crowded, public wooden boat to the small island off of the coast of Lombok, our own captain jumped ship when the boat began rocking to completely vertical angles. Fellow passengers scrambled after belongings that were dumped into the water. Of course, onlookers found this hilarious and recorded the fiasco on shore with their iPhones. Sorry, I can’t help you with your suitcase – gotta wait until this snapchat sends! Prior to that? We got in yet another fight with a corrupt driver that led to nearby locals becoming involved and us forking over extra money to deescalate the forming lynch mob. We arrived on the night of a full moon party. Moritz and I forced ourselves to interact with the other islanders despite how exhausted we were. When one of the fire dancers accidentally released his flaming nunchuck into the crowd of drunken onlookers, we took it as our cue to go to back to our hotel. This decision was solidified when Moritz became overzealous in a game of limbo and scraped his fresh wounds along the limbo pole.

Gili Trawangan truly lights up as a party island once the sun sets, with different dive shops hosting parties each night of the week. People tend to drink like fish at night, and dive with them during the day. Locals and tourists roam the washed-out roads, grabbing a bite to eat at Gili Trawangan’s incredible night market before releasing themselves into the night. It’s so interesting to hear, “Attention tourists, possessing drugs in Indonesia is a crime punishable by death,” from the seat of our airplane, and then be surrounded by a massive hedonistic party culture just a few short island hops later. Policemen are sparse – if even available – on Gili Trawangan, so as they say, when the cops are away, the Gili cats will play! Fishermen lazily fanned fish so fresh they practically swam onto the charcoal grill. Women dished up fresh plates of nasi goreng. Fruits that I’d never seen before with names I couldn’t pronounce were whirled into amazing juice concoctions. And as for me, I helped myself to everything… well, everything vegetarian. Since motorbikes and dogs are forbidden on the island, the only disruptive noises we heard were occasional catfights and 5 am calls of the mosque. Usually, I’d dub hearing the muezzin call an *~*interestingly cultural experience…*~* but our room was literally next to the mosque.

“Where are you staying?” Our friends would ask.

“In the mosque… basically.” We’d answer, with tired and blood-shot eyes. It’s probably why all of the seedy drug dealers targeted us – we surely looked like heavy users. “You want, boss? I have!”

On the third night, Moritz and I waved a white flag on trying to sleep. We’d join in on the chants from our bed while sitting up in our pajamas, drowsily groaning to the nonexistent tempo of the prayer. Luckily, we didn’t have it as bad as our friend, who moved hostels after the mosque microphone was given to a rambunctious group of children at four in the morning.

The locals use miniature horses and carriages, called Cidomos, as the preferred method of transportation. Moritz and I simply didn’t feel right about riding these beauties, and puttered about the island by renting bicycles instead. As I explained in my scuba diving post, most of our daylight hours were spent at the dive school we attended. On Gili Trawangan, we had no problems befriending people who were staying there long term. You’d think that the locals, or semi-locals (like those getting their divemasters), would tire of waving hello and goodbye to tourists, avoiding them altogether. Fortunately for us, we were able to immerse ourselves in a social scene and even joined a small clique! In this way, it seems like everyone lives in the moment. People realized we wouldn’t stick around the island forever, but they treated us as if we would. As a final hurrah, Moritz booked a ritzy hotel in Kuta, Bali for our last night in Indonesia. We planned on saying a bittersweet goodbye to Gili Trawangan and the dive scene we loved so much, and spending our last hours lounging on the beaches of Kuta while sipping cocktails. But no. Like I’ve said in countless posts, the transportation part of traveling never goes smoothly for me. Instead of another day in paradise, we spent 12 hours on the public ferry with rats, crying babies, and six Dutchies. All thanks to our horrible fast boat operator overbooking our trip and making no effort to remedy the situation.

When the fourth local performer sang for us on the ferry, and immediately held out their hats to Moritz and I – and not to any fellow Indonesians – I became frustrated. After giving a sub-mediocre singer change, he counted it and insisted for me to hand over more.

As retaliation, I managed to convince the Dutchies we were with to belt out a boisterous song. The locals simply looked passively off into the distance when the Indonesian performers sang. But when the Dutchies began bellowing, every head whipped back to see what was causing such a ruckus. Their eyes then turned to me, as I conducted the chorus of Europeans with my arms pumping up and down with the vivacity of a symphony conductor. Moritz hit all of the low baritone notes, providing a bass underline akin to a German fog horn. Our grand performance faltered when one of the soprano singers became insecure, and drifted into a shy silence. The others followed suit, ending the song awkwardly mid-lyric and without any warning.

All of the rats onboard that we initially spotted at the beginning of the journey were never to be seen again.

When I walked around and assertively placed a cup in people’s faces, we received nothing.

Unfortunately, our ferry ride that was supposed to be only six hours stretched out to twelve. We arrived in Bali at three in the morning and were only greeted by shady taxi drivers. One of them stumbled into me, reeking of alcohol and body odor. When he asked why we didn’t want to drive with him, I answered… “hmmmm, because you’re drunk and on drugs?” He shrugged and said with a toothless smile, “So… you don’t want a ride?” Eventually, we got a ride straight to the airport with the most sober of the pack.

So, we put my yoga mat to good use and slept on the airport floor. Despite all of the bad luck that seems to happen to me while traveling, I wouldn’t trade these experiences for anything in the world. Every scammer with a vendetta against us was outnumbered by ten cheerful and genuine locals. I saw a new part of the world, both on land and under the sea, and was able to put my traveling shoes on again. And luckily, they still fit fine… even if my mom says that I need new ones.