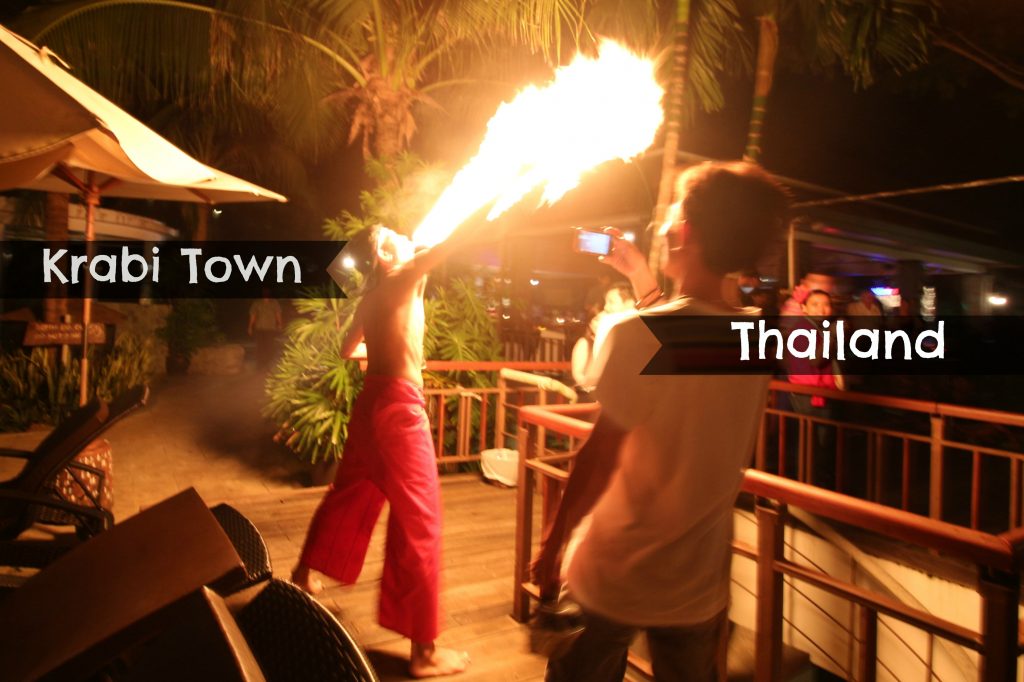 Gettin’ Down in Krabi Town, Thailand

What the hell is going on!? I thought, as the man who served me lunch just hours before poured kerosene into his mouth. He aspirated it in one long exhale and ignited his breath into a flame. He beamed at me and pointed to the hotel staff of housekeepers, chefs, and waiters stripped down into racy fire-dancing attire.

“I taught them all of this only two weeks ago!”

I’ve worked for employers who pushed me to Get in the Holiday Spirit! Spread Christmas Cheer! while thumping me on the back and passing around party costumes from the dollar store. Myself, and fellow coworkers would reluctantly adorn them, thinking, Why, oh why, can’t I drink at work on a holiday?

The employees at The Elements resort were nothing like you’d expect any employee to be when they have to work on a holiday.

They were vivacious, loud, and seemed genuinely excited to be working on New Years Eve. In an effort to provide some context to this occasion, Moritz, his parents, and I spent a few days relaxing at The Elements resort in Krabi, Thailand. When New Years Eve rolled around, the group unanimously voted to stay at the hotel when one of the workers enthusiastically told us that there’d be traditional dancing, games, fireworks, gluttonous amounts of vegetarian food, bar-tending shows, and *drum roll* fire dancers. What we didn’t know was that while there would be hired talent, the workers themselves were preparing to perform themselves. Ensemble after ensemble of dances and performances happened, until finally the resort took to involving the audience. Eric, the host, explained that the audience was going to play a very exciting game. One that involved luck and skill.

You have to realize that out of the audience, there were maybe only four or five native English speakers in a group of sixty people. The game was a bit chaotic and required the host to write out the number on a board, pronounce it about five times, and God forbid he said something along the lines of, “Does anyone wish I would call out a number? Like 17 or 4?” about ten people in the crowd would scream BYNGO! It takes some serious hosting skills to get an internationally diverse group of travelers so excited for a game that’s marketed to five-year-olds at birthday parties and win-a-sewing-machine nights at the community center. Helmi almost won — but was the victim of a few miscommunicated numbers and didn’t win after all.

Birgit managed to win a free dinner by smuggling a lime down her pair of tight white pants, and the real winning streak for our group only continued from there.

The host called up a few couples to participate in a dance-off. Moritz and I went on stage with seven other couples and all of us received some sort of prize. Before you start thinking that I’m hot on my feet, I’ll concede that the dance competition was based on participation, not skill. We were gifted with oil massages but ended up trading that with someone else for a boat tour.

For the grand finale (which Australians pronounce it as final – the grand final! That is SO disturbing!) I was horrified to see the housekeepers, chefs, receptionists, waitstaff, etc all went by the pool area and began lighting fire sticks and chains. Some were obviously more confident than others, who often dropped the flaming batons onto the wooden deck. I swear I felt some of my eyebrow hairs singe at some point when our waiter blew flames out of his mouth into our direction. This would never happen in America or Australia — where people working in hospitality aren’t even allowed to wear open toed shoes! Can you imagine having the housekeeping staff at the Hilton in Beverly Hills strip down to their knickers and SHOOT FLAMES OUT OF THEIR MOUTHS?! A skill they learned just two weeks ago?! No wonder we Americans have never been such working-on-a-holiday enthusiasts.

Outside of the resort, Krabi is a heavily trekked through tourist destination. Souvenir shops, white beaches, and restaurants are scattered along the coastline. We spent a few evenings indulging in Thai food and searching pharmacy shops for Tiger Balm. Unfortunately for me, I was duped by a small charismatic man into buying the “world’s strongest Tiger Balm” for $7 that ended up providing less tingle than an expired jar of Vick’s Vapor Rub. On our last day, Moritz, Birgit, and I went on the “Four Island” boat tour we’d won back on New Year’s Eve. While the resort was luxury class, the boat tour was… a bit on the “adventurous” side. We weren’t sure if the four island tour literally meant we’d be seeing four islands, or if there was an island named “Four Island.”

Birgit, Moritz, and I were greeted with a 1980s Toyota pickup truck that had a few rusty benches welded into the bed. This is pretty common in Thailand but certainly set the tone for the rest of the boat tour. We hung our heads as far out of the back as we could to avoid breathing in the dark exhaust cloud that formed next to us. After picking up a few more travelers, we set off to board the longtail boat.

A skinny Thai man whistled for us and about thirty Malaysian tourists to follow him down to a small wooden boat. We waded in waist-deep water to climb up the ladder and I immediately appreciated my decision to leave my non-GoPro camera at the hotel after seeing one of our fellow tour-goers completely fall off the boat with his backpack still on him while trying to climb up the ladder. The boat took us from small island to small island, each naturally beautiful but not without a few fellow tourists ashore. We rotated in and out of the water and walked along the small shorelines. It was pretty entertaining from a people-watching perspective to see thousands of people from all across the globe gathered on tiny islands in the middle of the ocean. Sun worshippers, rock climbers, families, honeymooners — everyone was here. After loading and unloading ourselves on each of the four islands, our boat got stranded on Krabi’s beach. A crowd gathered as the boat rocked side to side on sand, dumping people and belongings onshore (reminiscent of when this happened to me in Gili Trawangan!). Random taxi drivers and Moritz helped the other men try to push the boat back out to sea, but waves from nowhere only kept bringing it closer to shore. Eventually, everyone gave up — including the boat employees — and left the boat on its own — rocking side to side in the shallow water. We boarded the 1980s pickup truck, hopped into the familiar cloud of exhaust, and waved goodbye to the Malaysian tourists, the tour leaders, the taxi drivers, and everyone else vacationing. All of whom were soaking wet despite whether they wanted to be or not.

We went to Krabi expecting five days of relaxation. We got that — but not without amateur firebreathers, an unexpected boat tour, and approximately 15.7 watermelons worth of watermelon juice in our bellies.