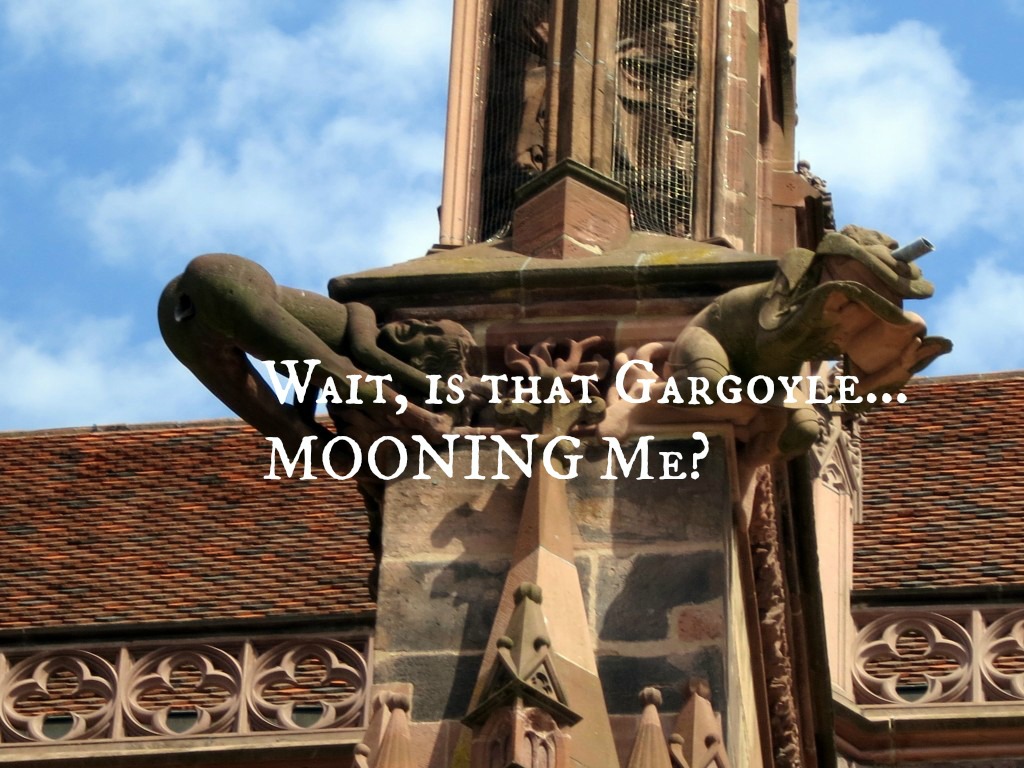 Is That Gargoyle Mooning Me? In Freiburg, Germany

We’ve all heard that “nothing is certain but death and taxes”… but perhaps we should add drama with our employer onto the list.  People from all walks of life groan and moan about their bosses, and after visiting Freiburg’s Cathedral (Freiburg Münster), I’m sure that even the stonemasons who built it sure had a lot to say about their boss as well.

Because what other reason would there be to build this horrific sight? As we all know how it goes, the city council did not increase the stonemason’s wages along with these heightened commands. It’s the basis behind so many of our woes. You can always count on a hearty cheer after yelling, “stick it to the man!” in a bar. People nod and glasses clink — it’s a story that goes across all cultures and dates back to the stone age.

The German stonemasons of the Middle Ages were no different. But instead of making passive aggressive Facebook posts (viewable to friends only) like the world today, they lashed out against their bosses the old fashioned way.

…Meaning they built an inappropriate gargoyle defecating in the direction of city council and stuck it to city’s most sacred building, the Freiburg Cathedral. Aside from rude statues, Freiburg is amazing. The colors are more vivid here and the people simply seem livelier than most of the modern world. Clear water runs through the cobblestone gutters in the streets of Freiburg. Children stand at the water’s edge, letting their imaginations run wild as they hang onto their wooden boats tethered to their tiny hands by a string. A mother tries to warn her child – Don’t get your new shoes wet – but her child is fixated on his majestic vessel, which has already sailed off into Neverland. Moritz and I put our feet into the gutters, stacking them like bricks. We hold onto each other for balance as the water floods around our pitiful dam. There’s something so much more charming about these gutters than the ones clogged with questionable banana peels and old newspapers in the streets of LA. Because I’m pretty sure that my feet would rot into gangrene stumps if I did this there. At noon one day, Moritz and I rushed to the cathedral, hoping to climb up the stairs in time to hear the church bells ring. We squeezed through the tall spiral staircase that took us all the way to the bell tower. Finally, we made it to the top and felt the ground begin to shake. Massive iron bells mechanically swung back and forth, creating a sound loud enough to make my entire body shake. Unfortunately, a family with three kids were up there with us, and the loud noise (understandably) terrified them. Even though the crying of the children rivaled the church bells both in decibel level and pitch, I enjoyed looking over the city rooftops and took a breath of fresh air. Most of Moritz’s family lives in the Black Forest, where Freiburg is the capitol. When Moritz’s cousin invited us to a barn party (which literally was a party thrown in a barn) or as the locals call it, a “village disco,” his mother warned me, “Be careful! The beer is stronger here!”

Pshhh, how can anything possibly be stronger than Coors Light or Budweiser?

The DJ played American 90s music and the crowd loved it. And yeah, to be genuinely interested in dancing to “Dirty Pop,” the beer most definitely has to be stronger. Suddenly, decorative inflatables caught my eye and Moritz and I spent the next hour trying to get them down from the walls and onto the dance floor. This was a massive success because we obtained two guitars and Moritz managed to get himself stuck in a floatie made for a two year old. Perhaps it was the “stronger-here-beer” (or the lack of oxygen in our brains due to constantly inflating hole-filled blow up toys) but the whole barn went a little cray-cray. At any given point in the night, someone was either laughing or crying while a Vitamin C song played in the background.

The rest of our days were filled with exploring the forest that spanned across Moritz’s grandfather’s house. We explored Roman ruins, waded through streams, and stopped for a bite to eat at nearby biergartens. Cheeky Freiburg is definitely a city I’ll visit again… and again… and again.