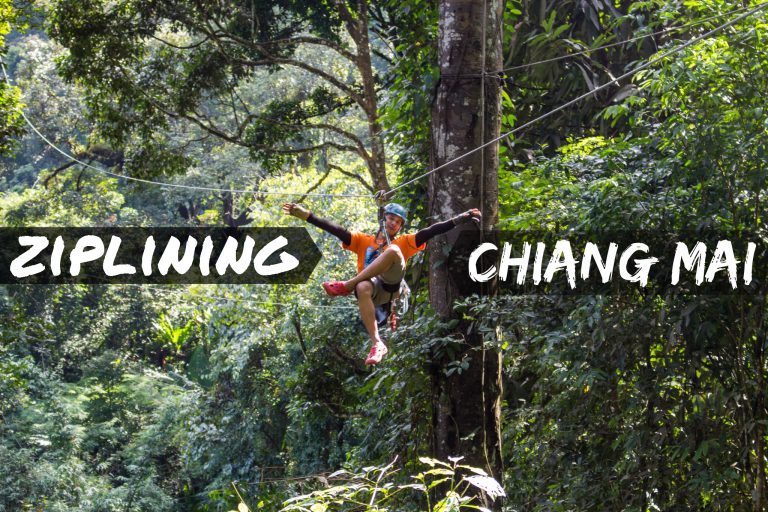 Flight of the Gibbon Ziplining: Flying Through Chiang Mai

Does hurling yourself off of high platforms count as a hobby, sport, or just an interest? Whatever category it falls under, I’m an active enthusiast. Skydiving, bungy jumping, sketchy tree-climbing, you can always count on me to join in on experiences that start in the sky and end with a scream. 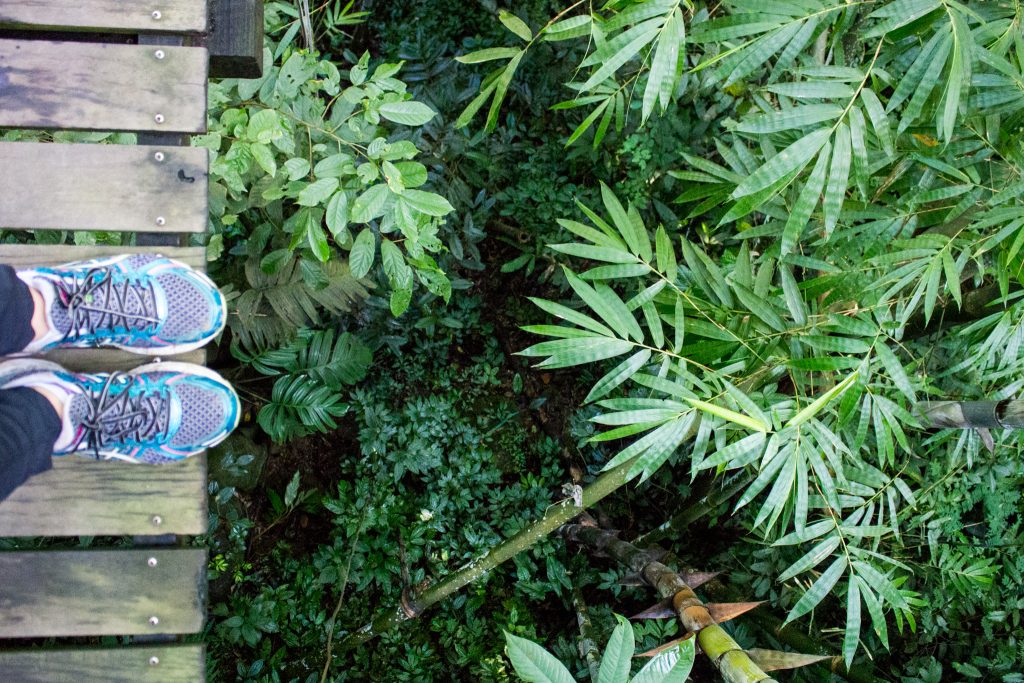 So while in Chiang Mai during the tail-end of my trip, I knew that ziplining through treetops with Flight of the Gibbon was an activity guaranteed to be loved by me.

Ziplining with Flight of the Gibbon

At 6am a large van picked me up from my hostel. A handful of other sleepy-eyed passengers rested against the seats.

Normally, I’d be tired from waking up this early but this morning I was exhausted. The night before, a strange hostel-guest stayed up the entire night hallucinating on his anti-malarial pills. He played guitar, chugged whiskey, wept, and banged his fists on the floor outside of the girl’s dorm room. Then – as if that wasn’t disturbing enough – one of my dorm-mates woke up in the middle of the night shrieking, “There’s a snake! Snake! There’s a snake in the room!” She rolled herself off of the top bunk and crashed onto the floor with a thud. I turned on the lights and searched the room for the alleged snake but didn’t find it. Totally convinced that a serpent was slithering around the room, she slept on the couch with Malaria Man. This was no doubt more hazardous to her health. He’d been slipping cryptic love letters under the door addressed to her earlier in the night. Like anyone with an inkling of self-preservation, I laid in bed the entire night with eyes wide open on the lookout for snakes and crazy people.

We drove through lush rainforest surrounding Chiang Mai to the Flight of the Gibbon headquarters, where I scribbled my personal details and was fit into a safety harness. Neon helmet strapped to my head, I was ready to fly. 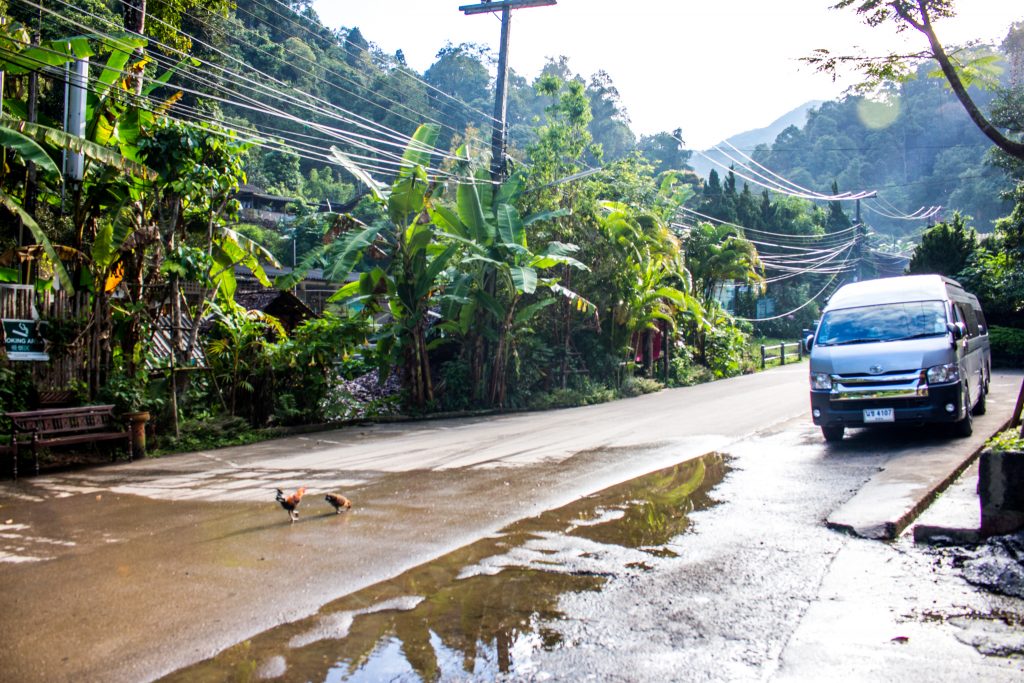 If I were to play a word association game, most people wouldn’t think of the word “safety” at the prompt of “Southeast Asia.” In fact, there are times when Southeast Asia takes pride in meeting no safety regulations – something that rarely sits well with visitors looking to catch their return flight home.

However, Flight of the Gibbon meets international safety standards on their zipline course. Triple bolted lines, sturdy clips, a briefing, and two “Sky Rangers” meant that I felt safe from the beginning. I’ll admit that this drained a little of the adrenaline building up in my body but I guess that’s a good thing in the long run.

My guide, who sported tiny marijuana leaf earrings, led the group on a hike through the dense jungle up to our first zipline. 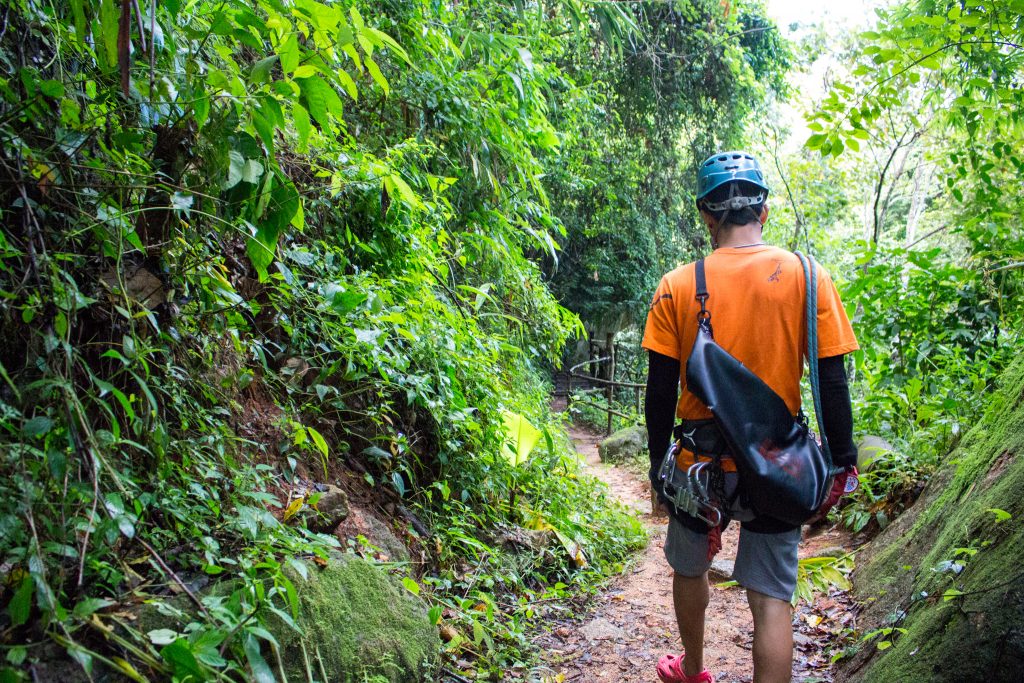 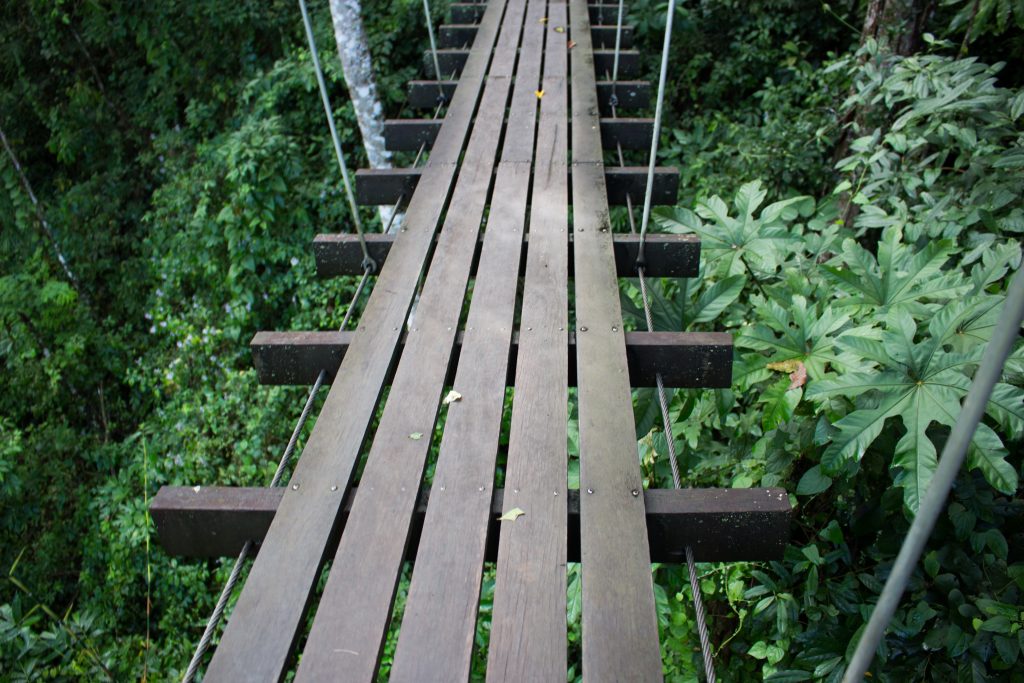 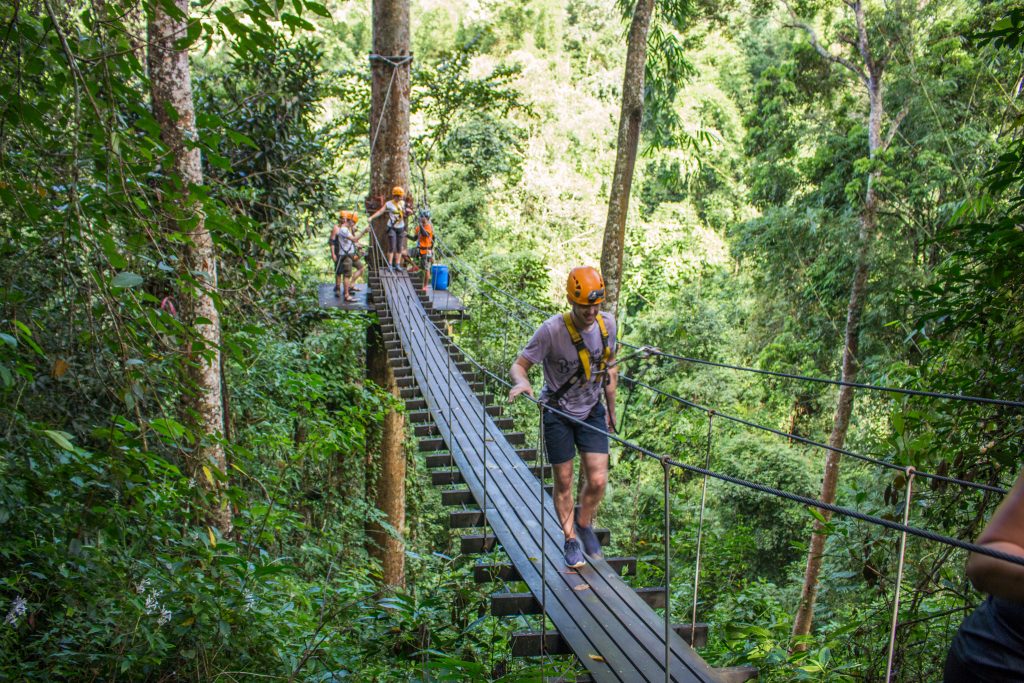 We flew through the sky on our harnesses – the wires buzzed overhead. Aside from over 7km of ziplines, the course featured swinging wood-plank bridges, and abseiling. 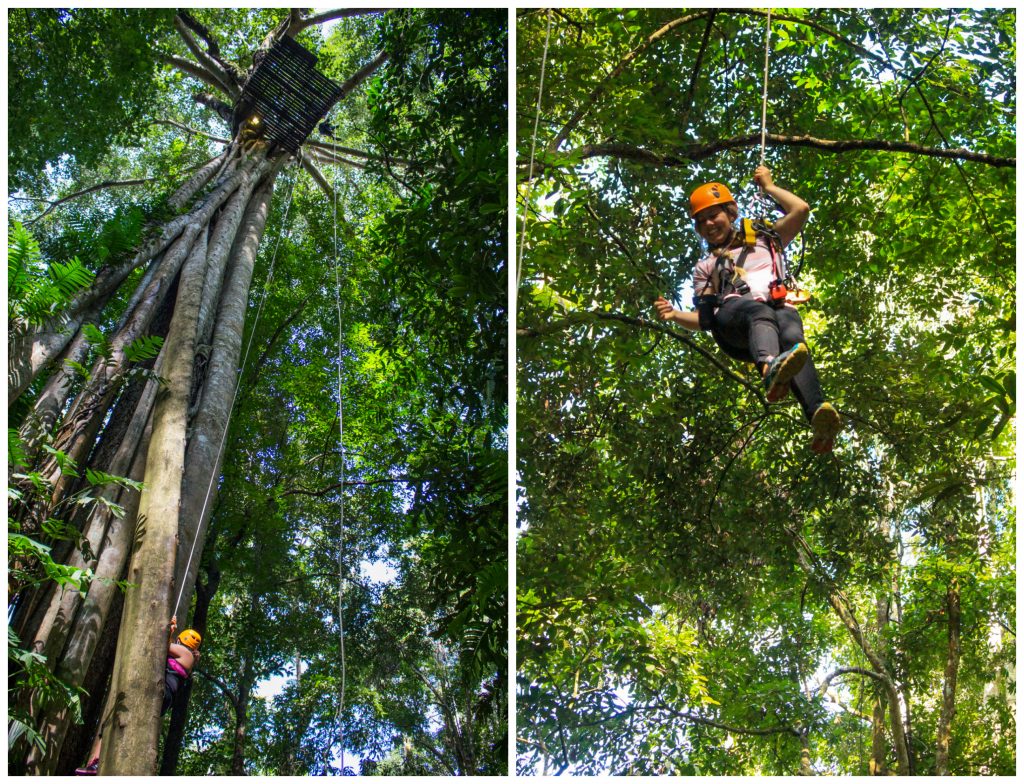 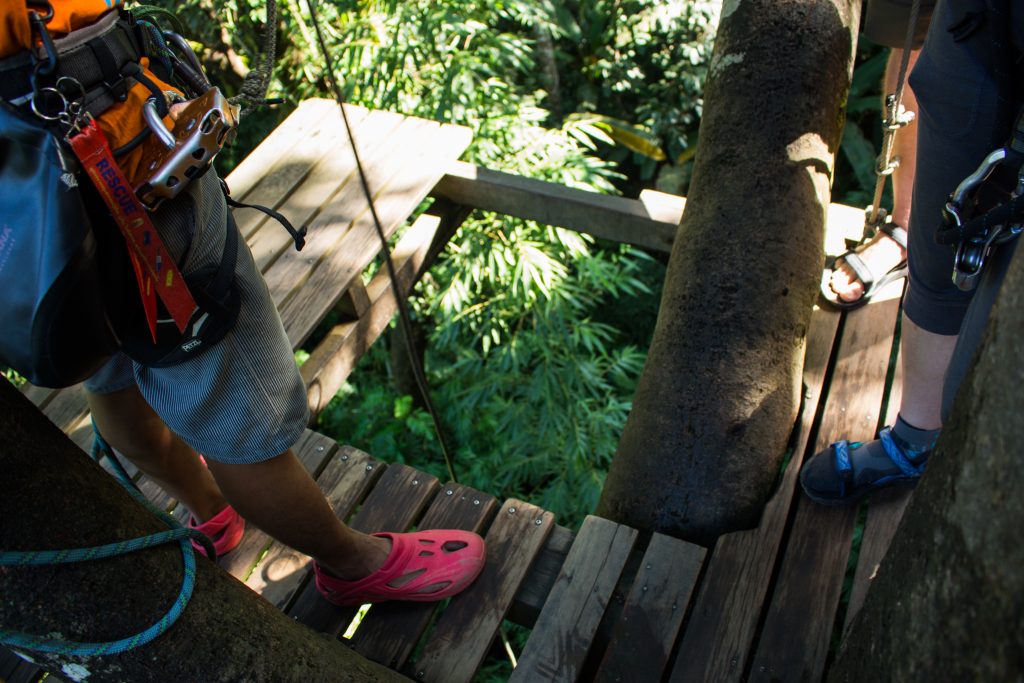 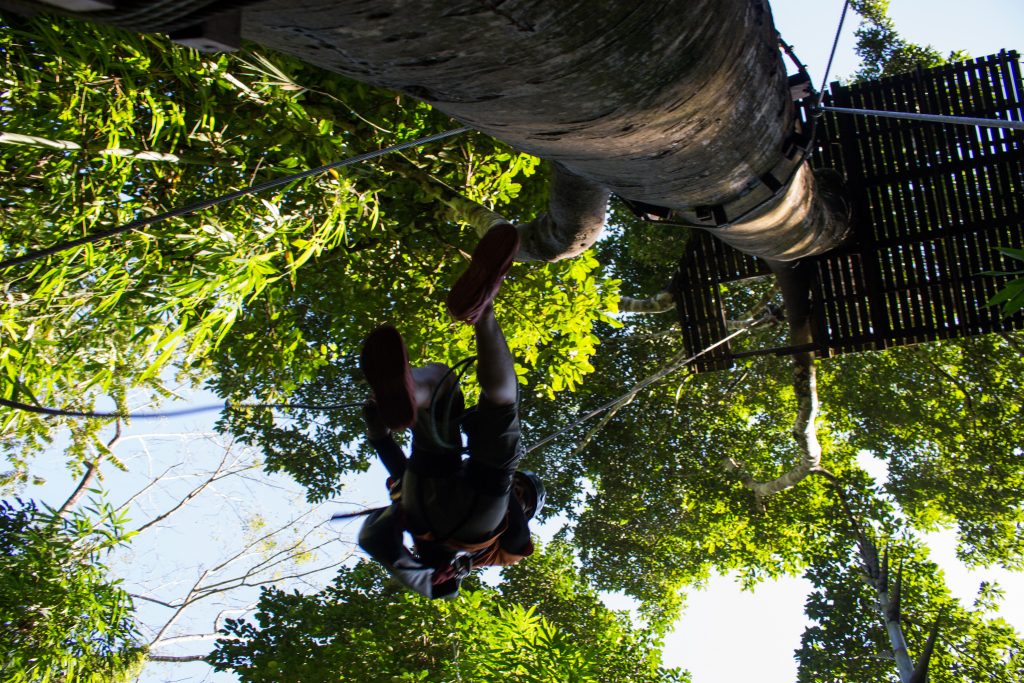 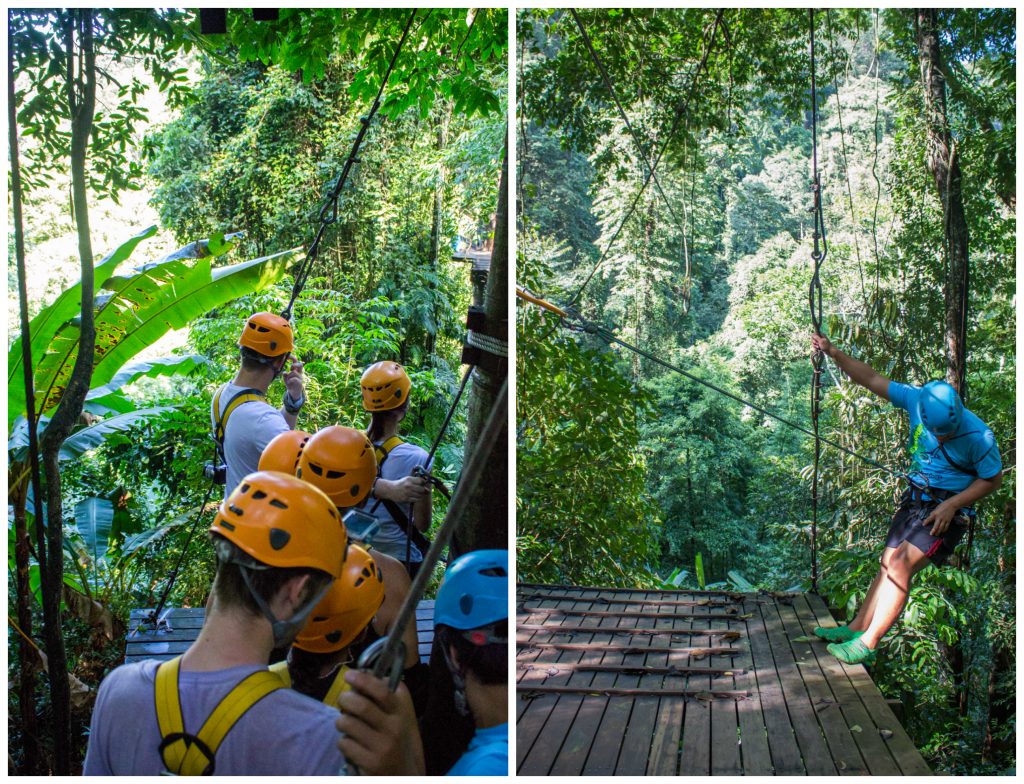 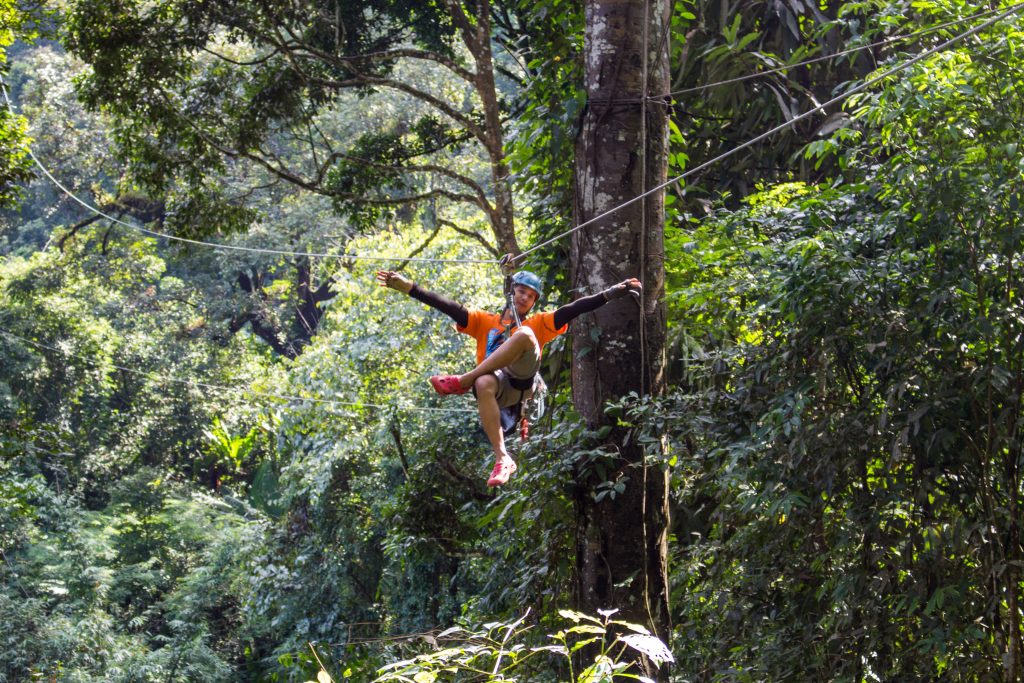 Exhilarated, I loved being surrounded by dense trees, birds, and seeing it from a treetop perspective.  We jumped forward and flew like superman and sped across the sky over treetops. My group was primarily couples, so one of the Sky Rangers volunteered to be my partner on the tandem zipline. The best panoramic views were only seen from the lines. 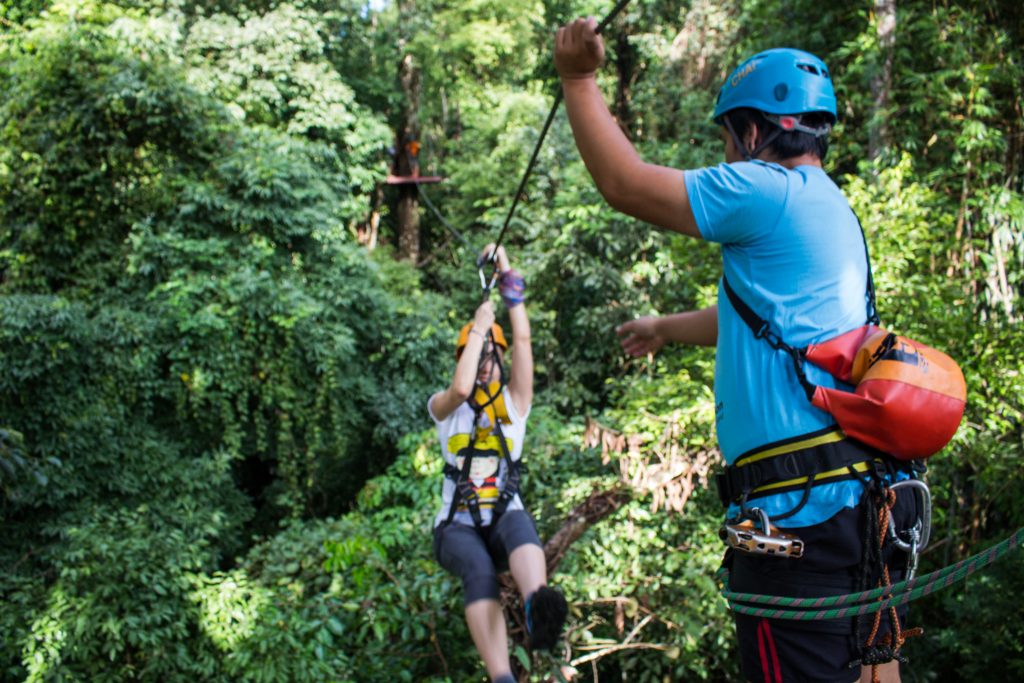 I always appreciate a good prank, and laughed when the instructor yelled, “Oh no! OH NO!” after one husband’s wife jumped off of the ledge. Some of the more fearful zipliners, however, remained stone-faced.

At one of the main ziplines, the group spotted a pair of gibbons in a tree. 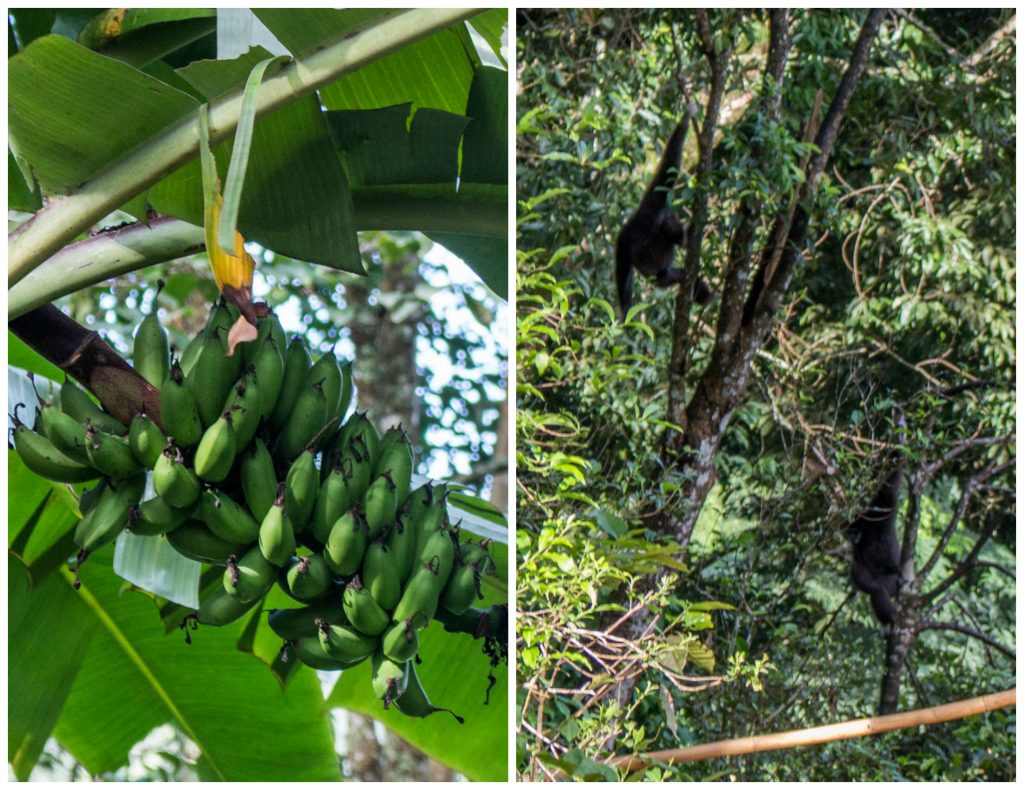 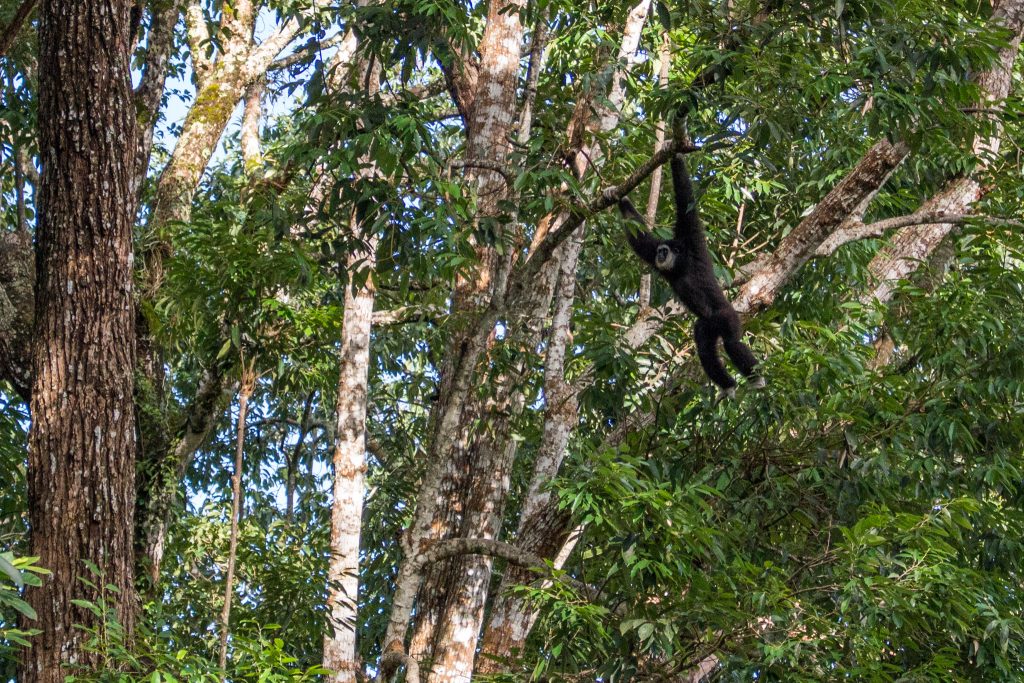 “Those gibbons don’t look wild,” I stated. One gibbon swung down from the tree holding a large carrot. 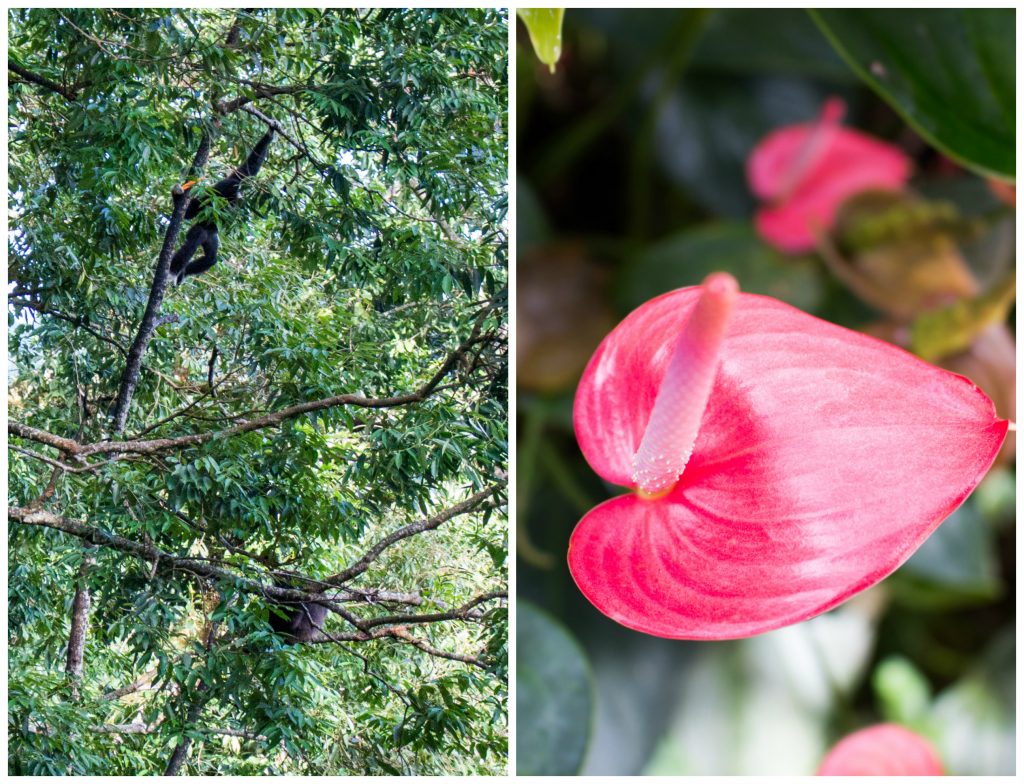 “They are wild.” Our guide said.

I learned that the gibbons were introduced to the rainforest by the zipline company as part of a conservation effort. The two older gibbons were found locked inside of a cage on the side of the road. The company’s founders rehabilitated the gibbons and reintroduced them into the jungle, where they gave birth to two sprightly offspring. They are the first gibbons to live wild in Chiang Mai for decades. The company employs someone to watch for poachers and look after the gibbons, which explains how they got that carrot. 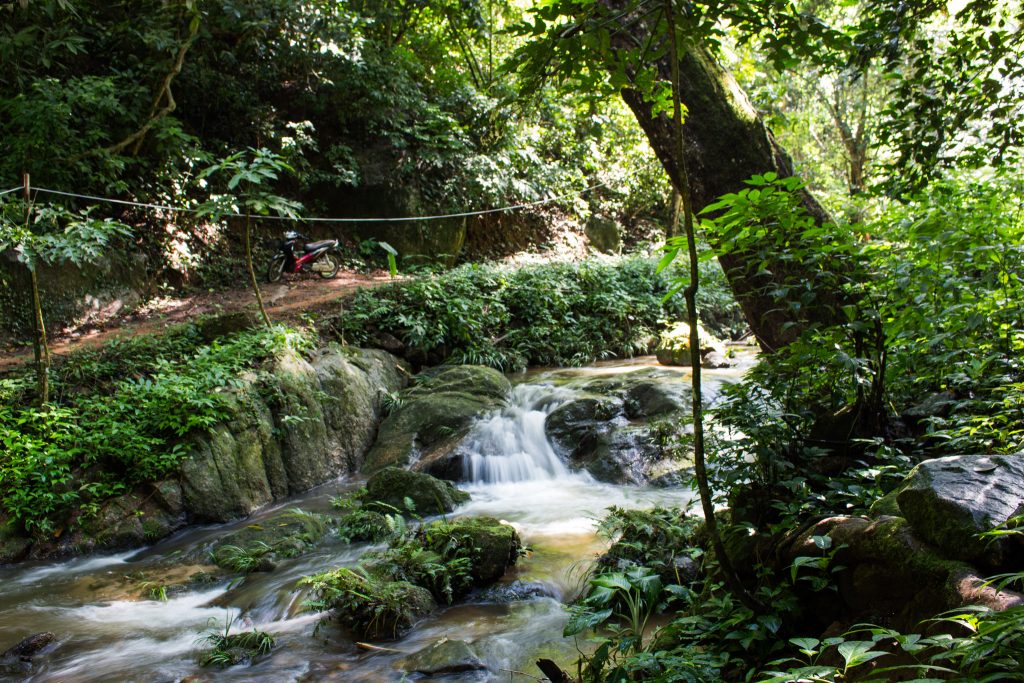 After our 800 meter zipline and exciting abseil descent, the company took our group to a nearby village for lunch and a waterfall hike. One the workers led me to a large meditation gong. He circled his hand around the edge of the gong until it emitted a vibrating hum. He stopped the gong and pointed to my hands. I concentrated and slowly touched the gong, but couldn’t get it to sound. 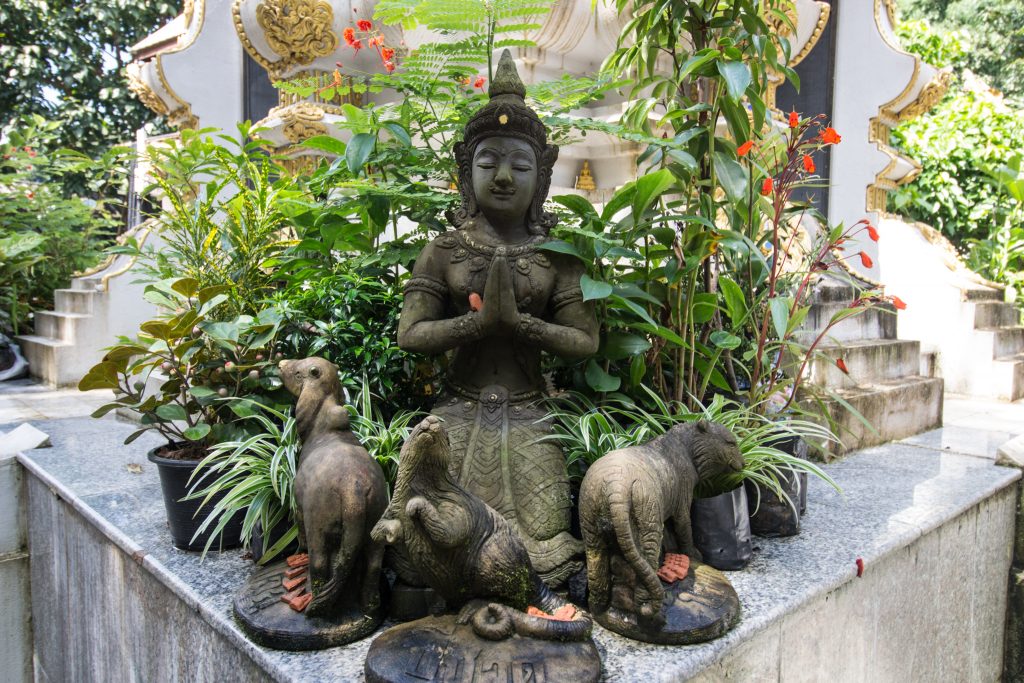 Yeah, story of my life mate.

After a few more failed attempts, I walked to the Maekampang waterfall. 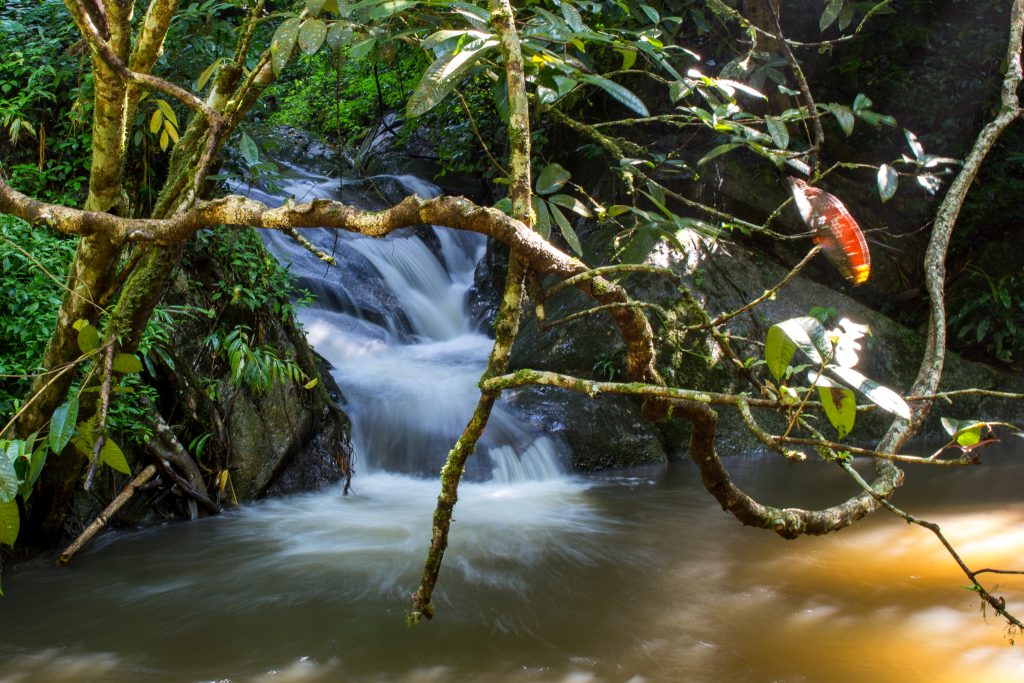 I walked through moss carpeted steps and watched monks meditate through holes of the temple’s concrete walls. Their lives of tranquility in the tree laced hills were a stark contrast to my beachside fast-paced lifestyle at home. 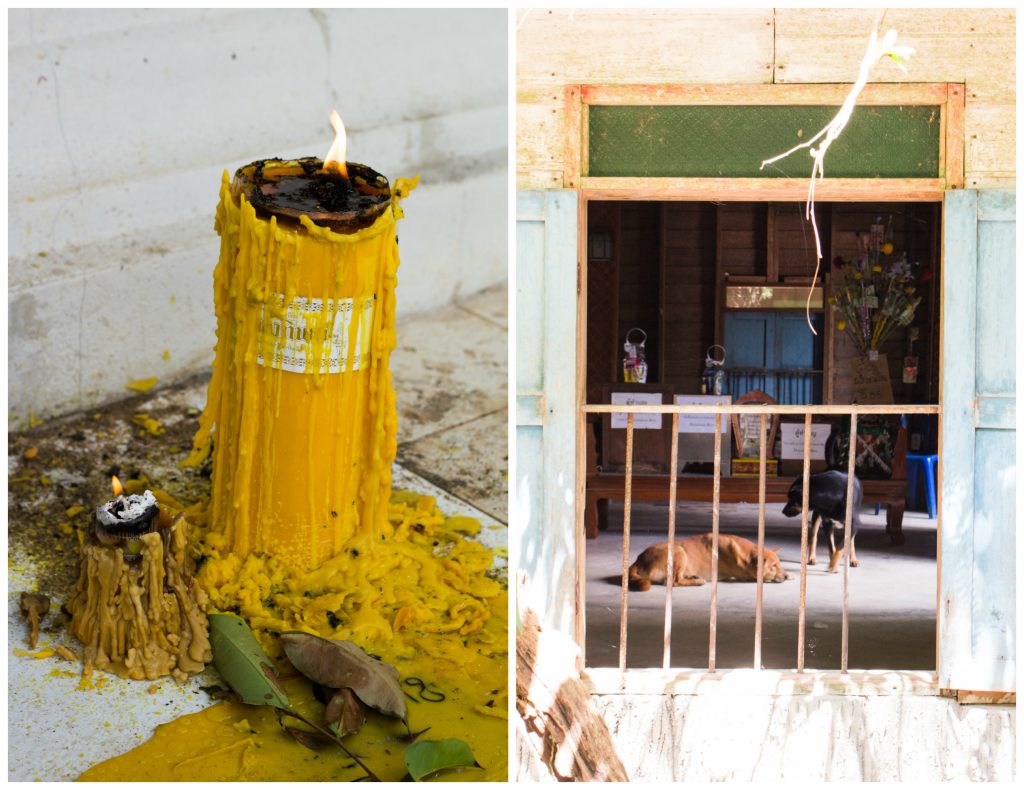 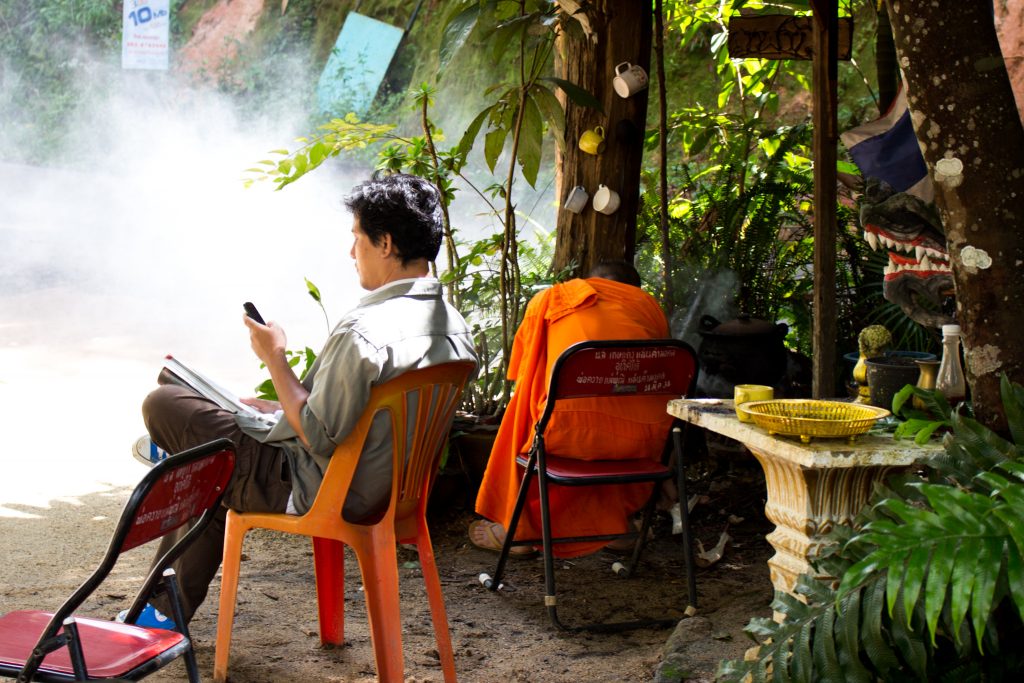 Back in Chiang Mai, nothing could top the adventure of ziplining through the jungle.  I spent my evening touring a golden hilltop temple, indulging in delicious food from the local vegetarian food festival, and retracing my footsteps  in the night market. I wasn’t ready to return to Perth, but my clock in Southeast Asia quickly ran out. 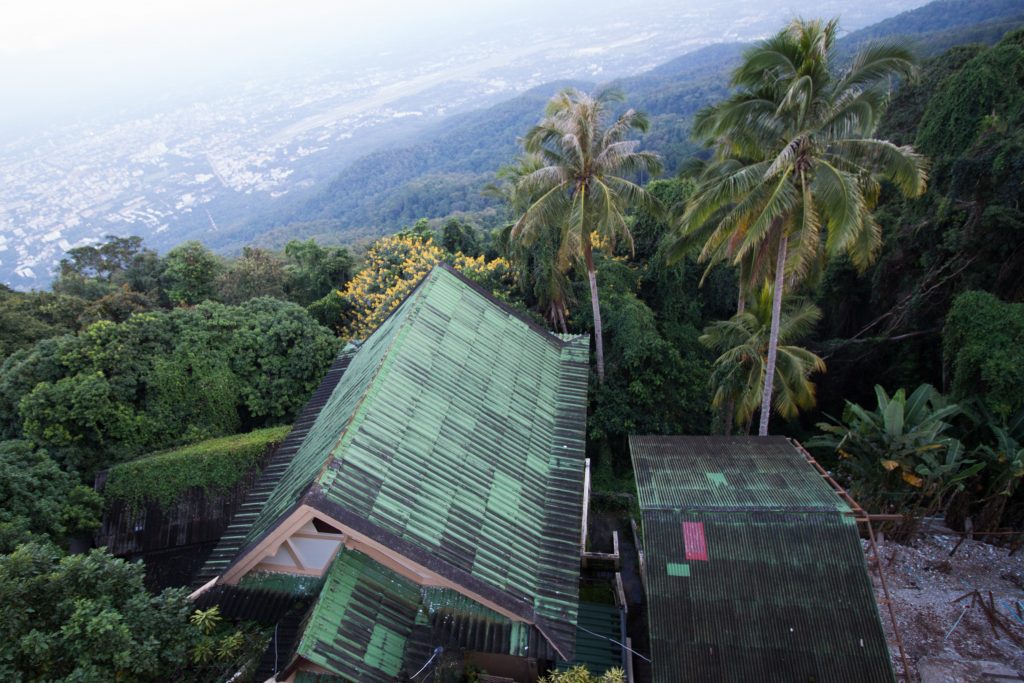 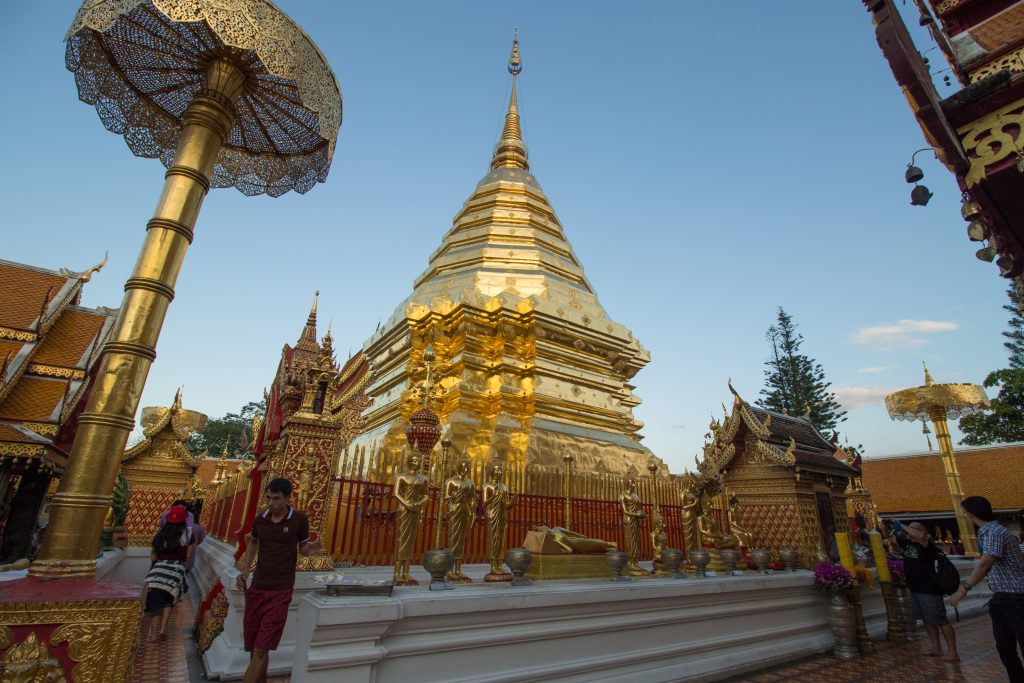 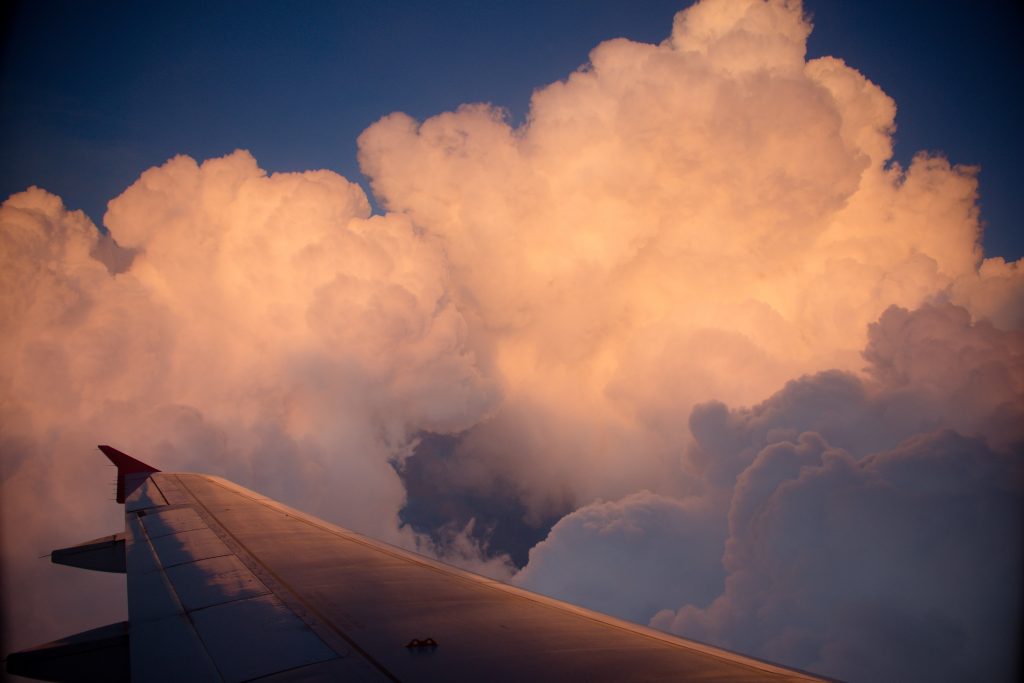 Flight of the Gibbon ziplining is one of the more expensive activities in Asia. A single day visit costs 3,999 baht. However, most people who visit agree that the price is worth it for the safety standards and value that you get. It is definitely one of the best things to do in Chiang Mai.
Transportation: The company provides pick-up and drop-off to your hotel.
Food: The restaurant included in your ticket price happily catered for vegetarians and people with allergies. The portion sizes are large, even by American standards, and will definitely keep you full until dinnertime.
What to wear and bring: Long pants to avoid uncomfortable pinching and bunching – diaper butt is unfortunately inevitable. Don’t forget sunscreen,  tight shoes, and a camera with strap.
Other essential info: According to the FOTG website, the company contributes 10% of their profits in “primate rehabilitation, reforestation, and ecological education programs.” With their success, Flight of the Gibbon has planted 30,000 trees in deforested areas and involved local communities in their projects. I always have a soft spot for companies who give back!

Many thanks to the adrenaline and primate lovers at Flight of the Gibbon for hosting me on this experience. As always, all opinions and words are my own. 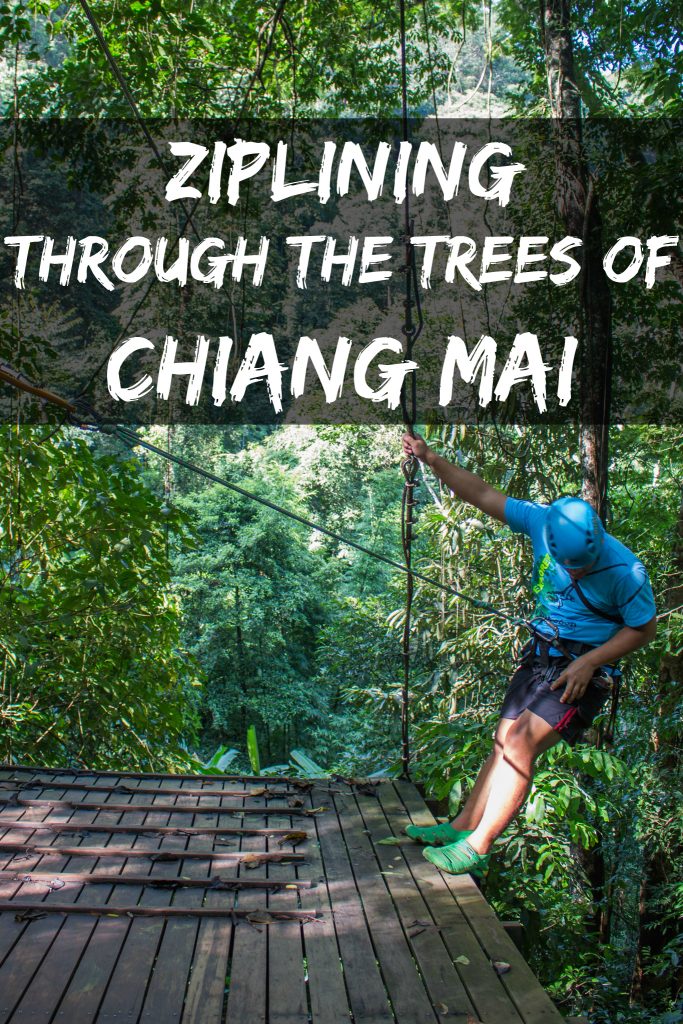