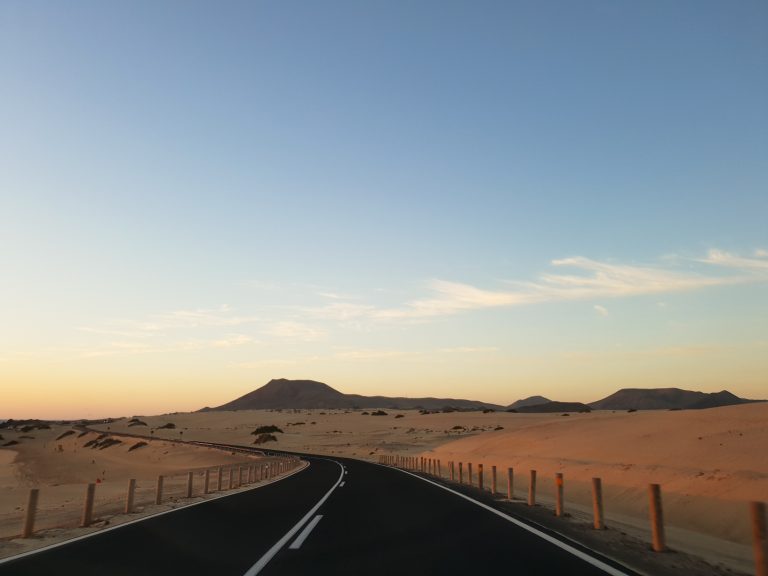 Fuerteventura is part of the Canary Islands, politically part of Spain and geographically part of Northern Africa, just off of Morocco’s coastline. The Canary Islands themselves are unique in that each of them has a differing climate from their neighbor. I like to think of Fuerteventura as an extraterrestrial utopia, or basically, what Mars could be hundreds of years post-colonization.

Fuerteventura, as the name suggests, is a magnet for strong winds. Surfers flock to Fuerteventura’s wind-protected beaches while kitesurfers and windsurfers play on the island’s other side.

In search of waves, Mo and I drove in our rental car from the town of Corallejo along the island’s coastline to a surf spot that we hoped would be perfect for me. I rented a 5’10” egg with enough volume to easily paddle into waves, but still small enough to duck dive without driven back into the rocky shoreline. With this bad boy in the back of our car, I was ready.

Highly underestimating how cold the water gets in Fuerteventura, I rented a wetsuit with my board as well.

We packed the boards onto the roof of our rental car and drove from town onto a dirt road that weaved along the coastline. Along the way, we saw a surfer dude with matted hair walking with a surfboard tucked under his arm. He heard the rumble of our car and stuck out his thumb, nodding his head in hopes of a ride. We rolled to a stop and motioned for him to get in.

He hopped in the car and a strong stench of body odor came in along with him. The smell was so strong, it masked that of my rental wetsuit. Instinctively, I hit the button to open the window. A thin layer of red dirt blew in from the road and settled onto our seats and belongings.

He told us his name and about his life as a surf instructor in Fuerteventura. We came to a turn off laden with sharp rocks, we he hopped out and told us he’d walk the rest of the way. We bid him farewell and continued to search for waves that would be not too big, not too small.

After being in a slew of conservative countries for the past year, I took a double-take each time we drove past someone wearing nothing but their birthday suits. Surfers shimmied in and out of their wetsuits without bothering to makeshift a privacy curtain from their towels. Sunbathers sprawled out on their towels with nothing but the wind beneath their cheeks.

Them sausages were sizzlin’ in the heat.

I have to say, I felt jealous. I’d love to live somewhere where it’s socially acceptable to drink coffee in a beach parking lot while standing starkers.

As a reference, wearing short-shorts and a tank top is considered offensive in many parts of Indonesia and conservative parts of the Pacific Islands. Even in Fiji, I make an effort to cover either my legs or my arms whenever I go into town. Bikinis and skimpy dresses are saved for major resort areas.

One of the best things about Fuerteventura is that there is a wave for everyone. Experienced surfers get barreled at the island’s bigger breaks just a few miles away from waves where the surf camps post up. We found a wave in between the two. Seeing the dodgy entrance and exit though, I wondered if I’d be better watching the fun from the beach.

Something I’ve struggled with for a few years now is anxiety when it comes to surfing. I panic easily in the water whenever there’s a board underneath me — and I find tens of excuses to chicken out.

This wave had everything that I fear: murky water, a rocky entrance, shallow reef, and it had a strange aura. Nonetheless, I paddled out (while swearing internally the entire time). I copped a few waves on the head and started to tell myself, “I like this! This is fun!” whenever I tumbled underwater.

I sat on the shoulder where I felt safe as waves came through and the wind picked up. Notoriously guilty of pulling out of waves as soon as it might looks like I’ll get them, I repeated my mantra: “This is fun! I love this!”

Eventually, I caught a few waves and my confidence began to build. We stayed out for hours catching wave after wave.

Then, we ventured to the same spot the next day.

In another planet, I am nearly fearless.

On the last day of our trip, a new swell rolled through. Waves barreled along the limestone reef and some of the best waves in Fuerteventura showed us their sheer power.

I toyed with the idea of paddling out. Then decided, that while I may be fearless in Fuerteventure…