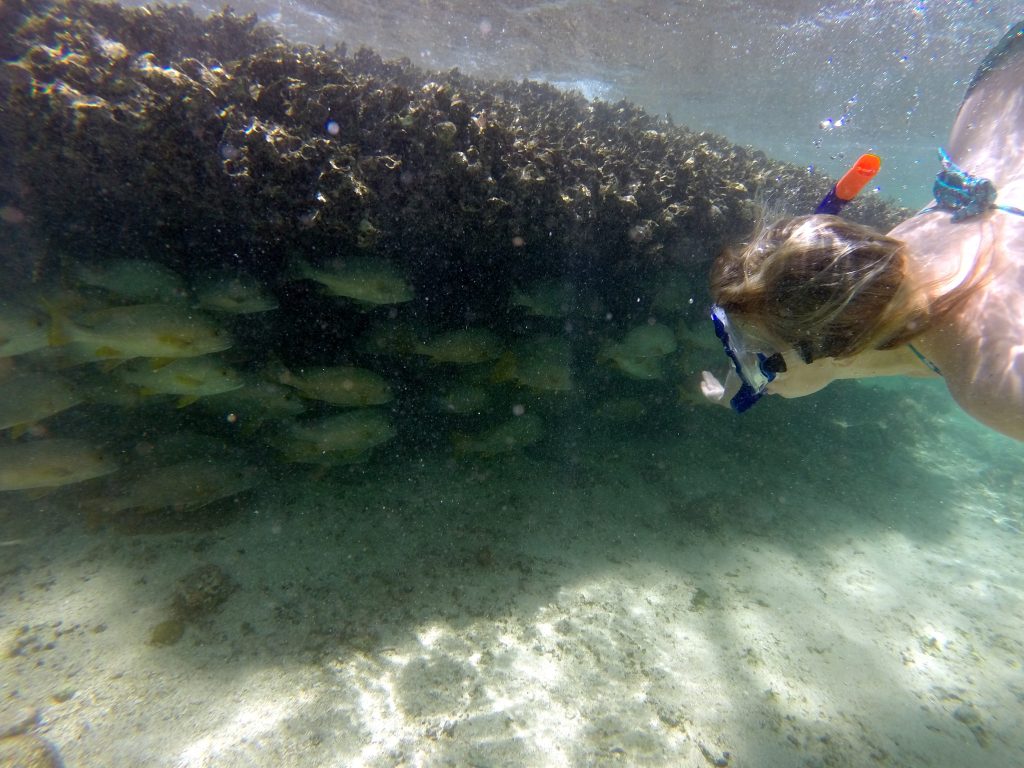 Psst, here’s one of those up-to-date posts I’ve promised about my up-to-date life in Australia.

Moritz’s parents are visiting for the next two weeks, and we were able to jet off and see the amazing Ningaloo Reef in Western Australia for the weekend.

I imagined Exmouth, one of the towns that border the massive reef, to be a placed swamped with reef destroying tourists armed with snorkels.

A place where a thick film of sunscreen oil slicks the oceans surface.

A place where every child tries to catch his or her own little Nemo.

A place where turtles have graffiti marks on them from too much human interaction.

Alas, Exmouth was none of these things.

Our small plane from Perth to Exmouth wafted through the sky, barely filled to half capacity. The notorious Western Australia wind made the flight so turbulent that the pilot had to re-do our landing. Moritz closed his eyes as a peaceful and serene look spread throughout his face.

Wow, what a seasoned traveler he is… to drift to sleep during such a bumpy ride.

Then, I saw his hand dart for the barf bag tucked away in the seat pocket. After a little over two hours, we arrived at the three room airport plopped on a military base located in the middle of nowhere. Fortunately for everyone on flight QF 2429, Moritz composed himself enough to land with his soggy flight meal still inside of him.

On our drive to the hotel, the only other living beings we passed were emus. …And apparently they are more of the city-dwelling type. After dinner at the only restaurant open that night, we settled into our massive hotel rooms and looked over the open water. Yes, Australia is a land for adventurers and dreamers.

Some of us, like Moritz’s father – Helmi, are more of the dreamer type. He lounged around the hotel rotating between the beach, the pool, and the bed, while the rest of us explored the coastline for the day.

At least one of us got to experience all of the amenities.

In Exmouth, most of the neighborhoods belong to a creature known for not only building amazing homes, but destroying them as well.

And they don’t answer the door when you knock.

Termite mounds over two meters high dotted the otherwise desolate terrain. We stopped to pay some a visit, hoping to catch a glimpse at these little creature’s lives. About an hour and a half from the town center is Yardie Creek, where we hiked through the main gorge area. The sign says the entire hike takes around two hours, but it’s very possible to complete the trail start-to-finish in just one hour. Hundreds of animals call the gorge home, enjoying ocean-front property without dealing with large sea predators. Reef sharks take shelter in the gorge for their first few years of life, growing strong until a high-tide or surf swell wipes away the small band sand protecting the gorge from the sea, connecting the creek to the ocean once again. Even rock wallabies nestle in the nooks and crannies of the gorge rocks that provide shade, a treasured thing in a terrain so tree-less. From inland to beachside, we made our way to the edge of Australia’s largest fringing reef — equipped with snorkels and fins. Beneath the sea’s surface, iridescent fish over a foot long casually swam under our bellies.

A school of large grey and white striped fish took shelter in the crevices of a large rock.

Parrot fish darted in and out of the tangerine colored coral.

With every blink, a new creature appeared just before my eyes. There were no tours going around with people stomping along the coral. At one of the most popular snorkeling destinations, in the middle of summer, it was just us!

…though the 110F heat probably explains why February is Exmouth’s slowest month of the year.

Making our way up, we stopped at Turquoise Bay for a chance to see more marine life. And marine life we saw!

Within twenty seconds of our arrival, I saw the outline of a reef shark swimming along the surface of the water just behind Moritz and Birgit posing for a picture.

Throughout the next few hours, more reef sharks, turtles, and even a neon orange manta ray with electric blue polka dots were spotted!

We spent the rest of our time beach hopping, catching glimpses of reef sharks, kangaroos, and turtles scoping out the shoreline for a prime spot to nest. At one of the beaches, you can see SS Mildura, a sunken cattle ship that demised on the reef in 1907.

The good news: the cattle survived.

The bad news: they were soon turned into beef patties. Survive a cyclone shipwreck only to be turned into someone’s dinner a short while later. C’est la vie.

Moritz and I ventured to the shore out in the moonlight in hopes of spotting a sea turtle creating her nest.

Exmouth shoreline hosts the breeding grounds for three different species of sea turtles. At night, the female turtle drags her pregnant body up the shoreline and digs a hole in the sand for a soft nest to lay her eggs.

When the hatchlings are ready, they dig their way out of the sand and make their way to sea, guided by the starlight over the water. Sadly, due to natural predators and human-related factors, only one hatchling out of every 1000 eggs will survive to adulthood.

We began walking along the water’s edge until we stumbled upon turtle tracks in the sand. Our hearts pounded as we crawled on hands and knees, holding our breath as to not disturb the pregnant turtle.

Her tracks lead up the shoreline, made a huge loop, and continued another twenty meters parallel to the ocean’s edge. Eventually, a dark blob in the sand caught our eye.

Is that a turtle? I whispered.

We watched the blob for five minutes without noticing any movements.

Suddenly, a spray of sand shot into the air – causing me to stifle a startled gasp.

Definitely a turtle! A huge one with her shell spanning about a meter long.

We watched the turtle cover her nest by flinging sand behind her in a methodical manner for over two hours, until the moon set and we couldn’t see her any longer. It’s incredible how hard the mothers work to dig and protect eggs that may never even survive.

On our drive back to the hotel at around two in the morning, kangaroos speckled the sides of the road. Which way would they bounce? Nobody knew. At times, it seemed like they didn’t know where to go either. They would look left, and bounce right. I speculate that this bounce spontaneity is the cause of their roadkill demise. Our car slowed to a crawl to ensure no kangaroos or snorkelers would be injured.

In the morning, we flew back to Perth out of the same small three-room airport. The blast of 90 degree air feeling like a refreshing change from the sauna known as Exmouth.