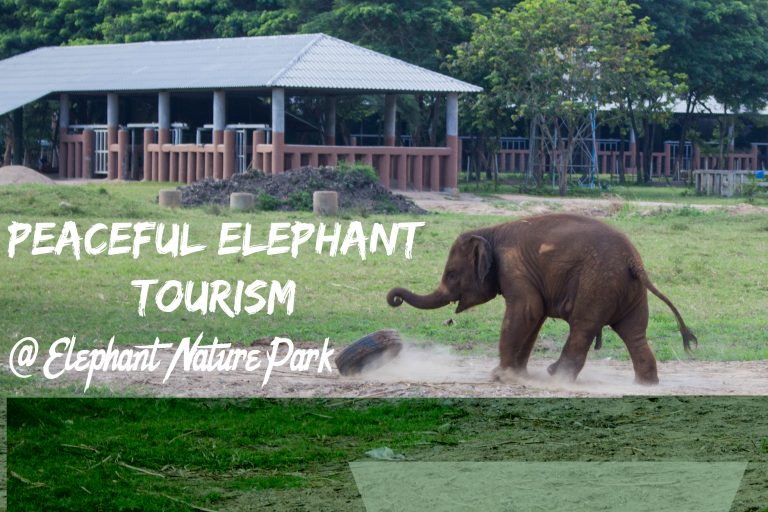 A Day at Elephant Nature Park in Chiang Mai

“Really? REALLY? People are doing yoga on elephants now?!” I muffled a few expletives as the TV showed a couple in Thailand preparing to do yoga on top of elephants.

Wow, what’s next? Base jumping off of the neck of a giraffe? Kumbacha chugging while surfing on the backs of humpback whales? Tap dancing on the face of Mona Lisa? Pass over the kale chips, there’s a train-wreck in progress.

No offense to elephants, but the leathered husband looked like he could be mistaken for one himself. I cringed as he hurled his sweaty body onto the peaceful creature.

I’d been drafting this post when the show came on. In my internet browsing, I discovered a few words said by Lek Chailert, the founder of Elephant Nature Park, in an interview with Green Global Travel.

“In so many places around the world, journalists cause more harm to the animals than anyone else because they write the wrong information.”

Welcome to the mainstream media! Where yoga on elephants is now officially — a thing. Despite being so important, elephants haven’t always had the best treatment. Today’s Asian elephants – when not exploited for their ivory – have largely spent their lives as entertainment for tourists through elephant treks, paintings, circus performances, and now, elephant yoga. I’ve mentioned in my post on visiting ElephantsWorld that elephants must partake in a cruel “breaking of the spirit” ceremony called Phajaan to be tamed for these activities. Elephants by nature are wild and rambunctious, after all.

I’m unsure whether most travelers know about phajaan and still participate in this type of tourism anyways, or whether travelers are ignorant to the behind-the-scenes of elephant tourism. Anyways, I’ll leave that one up to you to decide because it’s time to turn this post into a happy one.

The Story of Elephant Nature Park

Lek Chailert, a tiny-but-mighty elephant rescuer, was born in the hills of Baan Lao, Thailand. Her grandfather, a traditional healer, was gifted a baby elephant after saving one man’s life. As a child, Lek raised this elephant like a sibling and developed a strong love for the species.

A few years later, Lek witnessed the cruelty in a nearby trekking camp. This inspired her to devote her entire life to animal welfare by founding the Elephant Nature Park and the Save Elephant Foundation.

Today, Elephant Nature Park near Chiang Mai, Thailand is home to rescued elephants, cats, dogs (over 400), buffalo, yaks, a monkey, and a handful of resident human staff and volunteers. They’ve successfully rescued over 35 elephants and have inspired scores of trekking camps to retire the rides in exchange for a more interactive, less harmful tourism experience. Elephant Nature Park allows elephants to roam without chains, does not allow riding of any sort, and encourages the elephants to form herds. I’ve previously visited a separate elephant sanctuary, ElephantsWorld, an incredible experience of bathing, feeding, cooking, and chopping down banana trees for elephants. However, there where a few aspects of it that left a sour taste in my mouth. For example, ElephantsWorld had mahouts that rode the elephants, used bull hooks (the workers claimed that it doesn’t hurt), and kept the elephants chained. When I passed through Chiang Mai a few months ago, I had to visit Elephant Nature Park. Elephant Nature Park, hopefully, would be what ElephantsWorld and similar camps could progress to in the future.

A large van picked me up from my hostel early in the morning, and we were shown an informational movie during the drive to the reserve. Upon arrival, the day started with feeding a resident elephant fruit from a bucket. Truckloads filled with bananas and watermelons were dumped into buckets and taken over to the visitors and volunteers. I was appointed to an overzealous young elephant, “Fatty” Faa Mai, who eagerly tried to climb, grab, and steal any rogue fruits from the platform. Meanwhile, her older nanny waited patiently for people to place a fruit directly in her trunk. After the feeding, I watched the elephants roam from the sky-platform. Even in a sanctuary filled with lone elephants rescued from trekking camps, the streets of Bangkok, zoos, circuses, and logging camps, the elephants formed herds. Their mahouts lounged nearby, and kept an ever-steady eye on them. My group walked down to visit Navann’s herd. Navann, a baby boy, was born at the park three years ago. Despite being so young, he’s stirred up a lot of trouble. Surrounded by six elders, Navann began playing fetch with himself. He picked up a large tire, tossed it ahead of him, and chased after it. He did this for a few minutes, before deciding that charging into the crowd was actually a better use of his time. Our group screamed and dispersed, with most of us seeking shelter behind a small pillar. Navann’s mahout chased after him – urging him to settle down. Navann didn’t care. Instead, he simply donkey-kicked his stumpy back leg in defiance. Navann does what Navann wants. It was at this point that the resident guard dog, got involved. The dog barked at Navann and chased him around a small tree. Navann turned around and charged at the dog, in a clumsy rage of energy. The dog barked. Navann trumpeted. Bored of the game, Navann eventually retreated back to the peaceful stability of his herd. The elephants spend a few minutes every day bathing in the river. We dumped buckets of water onto the tamest elephants, while the more rambunctious ones enjoyed bathtime alone. Once the shower was over, elephants promptly rolled around in red mud. The mud acts as a bug repellent and natural sunscreen for surprisingly sensitive elephant skin. They sprayed and slid in the dirt until it covered their gargantuan bodies completely.

It was incredible to watch elephants act how elephants should. In these simple moments, I wondered why anyone would want to experience the presence of these creatures any differently. Seeing them play, bathe, trumpet, eat, and watch them interact in their loving herds can’t happen in a hop-on-hop-off trekking camp.

At Elephant Nature Park, there is an overarching feeling that the customers come second to the animals. Your experience with an elephant is not as important as the elephant herself. If the elephant doesn’t want to eat, you don’t get to feed her. If the elephant doesn’t want to bathe, you don’t get to bathe her. In a humans-first world of customer service, this was surprisingly refreshing. It was a relief to know that my hard earned dollars were contributing to peace instead of pain.

When asked to recommend the best things to do in Thailand, I can join in with the hundreds of other people who wholeheartedly name Elephant Nature Park at the top of the list. Cost: The single day visit costs 2,500 THB (~$70 USD) and is great for people who don’t have much time in Chiang Mai. However, there are many options that could be better for you!
Transportation: Your ticket includes pick-up and drop-off from Chiang Mai. The days are long and the arrival/departure times are approximate.
Other Essential Information: If you have the time, it’s worth it to stay longer. The park offers week-long volunteer programs as well as overnight visits. Wear shoes that can get dirty, a hat, and lather up on sunscreen. The park is equally for cat, dog, and random animal lovers. Check out The Angloitalian’s experience volunteering with the pooches at the park! Follow Elephant Nature Park on Facebook for some seriously cute videos and updates on how the animals are doing. Honestly, they are my favorite Facebook page to check out when I’m procrastinating on social media. Blog housekeeping update: If you didn’t see it on my Facebook page, I just quit my job! I’ll be freelance writing full-time from now on!  Also, I made a group just for adventure, action sports, and travel lovers. Feel free to join and invite any like-minded friends. Also, you’ve probably noticed that I’m behind in blogging by just a little while. I have one more story to share about Thailand before I really catch up to schedule.