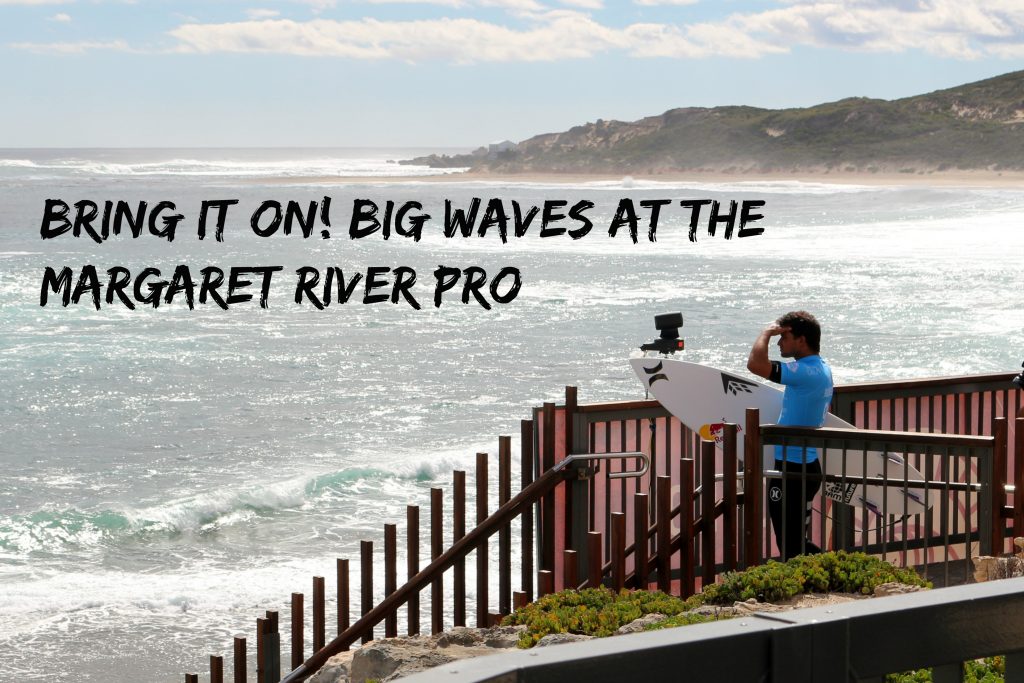 Bring it on! Big Waves at the Drug Aware Margaret River Pro

There are three unwritten laws in surfing: never drop in; never hassle; and never come between a surfer and a good night’s sleep the day before a big swell.

With no home base in Margaret River, Moritz and I often roll into campsites or friend’s living rooms in the late hours of the night, usually when most people are between their 2nd and 3rd stages of REM cycle. We’ve even resorted to pitching our tent in someone’s yard to avoid waking them up.

However, Friday night was different. We knew better than to arrive late and risk banishment from our surfing friend circle the night before the Margaret River Pro. Our car squeaked in promptly at 8 pm to our host’s home as invisible “Do Not Disturb” signs were thrown on every door in town. By 9 pm, all curtains were pulled tightly shut and not a single light was turned on in the house.

Just before sunrise, the house began to stir. The big gun surfboards displayed hung on the walls usually saved for special occasions came down and taken to the ocean where they belong.  Moritz shoveled a few scoops of stale coconut rice into his mouth to fill his belly.  There was no time to have a proper breakfast. Daylight broke and we caught the first glimpse of massive lines of the Indian Ocean rolling in. The tips of the waves gleaned brightly as if they were match tips lit by the sun. Kookaburras started laughing as if to say, “Haaaaa suckas! You’re going to get smashed!” After some nudging from a seasoned big wave surfer, Moritz was coaxed into braving the still-growing waves of Boat Ramps. I took a photo of him and teased, “Let me get a picture. It may be your last!” Legendary surfer, Tom Carroll, also happened to be out there as well. When he caught a wave, followed it with a manic laugh and yelled, “Come on in boys! There’s enough room for everyone!” A few other surfers followed his instigation of a party wave, and dropped in alongside him. Behavior unheard of in other big wave spots of the world is practically common courtesy in Margaret River — there truly are enough waves to go around.

As for myself that morning? Well, I am highly aware of my limits of the ocean. Confronting 20 ft waves at a break like Boat Ramps far exceeds them, so I filled up my coffee cup and walked down the dirt trail to catch the first heats of the Drug Aware Margaret River Pro contest. A tiny furball of a dog ran past me down the dirt trail, kicking up a cloud of dust in it’s wake.

The contest goers at Margret River couldn’t be more different to those I’ve seen at California contests. The only people chasing down pros for an autograph were star-struck children looking to score half of a broken board, not the bikini clad women looking to get a body part signed as I’d seen at the US Open. The Margaret River Pro is the town’s biggest event of the year, made more exciting by the fact that a few locals would be participating in the contest. Mr. Popular, Taj Burrow, hails from Yallingup, a few minutes north of Margaret River.  During one heat of the contest, one announcer asked him why one of his fins was missing.

“I forgot to screw it in,” he explained.

Since the contest announcers were older local surfing legends, they reminisced on the good ol’ days of watching Taj Burrow grow up.

“One day, he was so excited for a contest… he left the house early and got there only to realize he’d left his surfboard at home!” Loud cheers from the crowd were reserved for the local boys  and King Kelly Slater. Otherwise, competitors were met with genuine nods and claps after landing a string of tricks on a big wave. Margaret River is genuine — you’ll get cheers if you deserve it, not just for being famous. At the end of the day, Kelly Slater was matched against his surfing kryptonite, Adriano De Souza. Despite spending a long day under the sun, the crowd perked up to see if the King would get dethroned.

A crowd of Brazilians raised their flags and greeted Adriano as he paddled to shore in victory, with Kelly hanging his head behind him. There are so many discussions happening out there on whether Kelly Slater should or shouldn’t just retire already! But one thing’s for sure — when he’s around — all eyes are on him. Watching hours of surfing inspired me to give it a go myself. We pulled into Gracetown, one of the most popular surfing bays, and it seemed that everyone else had the same idea. Cars spilled out of the small parking lot and onto the sidewalk. One car would unload passengers and seek parking luck in the nearby neighborhood. The smell of sea water and neoprene hung in the air as everyone changed into their wetsuits and shared favorite snippets of the contest. Once in the water, every wave was a party wave whether you liked it or not — and a few human obstacles thrown down the line for good measure! There were enough children to fill up a few school buses at my preferred spot, Huzzah’s, giving me flashbacks to all of those summers spent teaching surf camp in California. Frustrated with dodging boards and flying children at Huzzah’s, we paddled over to South Point, a break that will have you splat onto the reef if you don’t get up right away. I positioned myself just outside of the break, where I could still see inside of the lefthand wave. Bianca Buitendag, one of the South African chicks on tour, caught just about every third wave and showed us some seriously powerful surfing.

I wanted to stay close to the pack of surfers to avoid being seen as an outlier by any toothy creatures underwater… but I also knew my duck diving skills wouldn’t be sufficient enough for the overhead waves rolling in.

An unexpectedly tall wall of water rolled in, washing away the rest of the surfing pack and leaving me alone to wait for them to paddle back to the lineup. On second thought, maybe I didn’t mind being the outlier as much as I’d thought.

The sun dropped below the horizon, casting an orange film over the bay. Moritz, myself, and the other surfers paddled to shore reluctantly like children being called in to class from recess.

The waves, the weather, the vibe from the crowd — surely everyone in Margaret River that day would’ve described it as perfect.