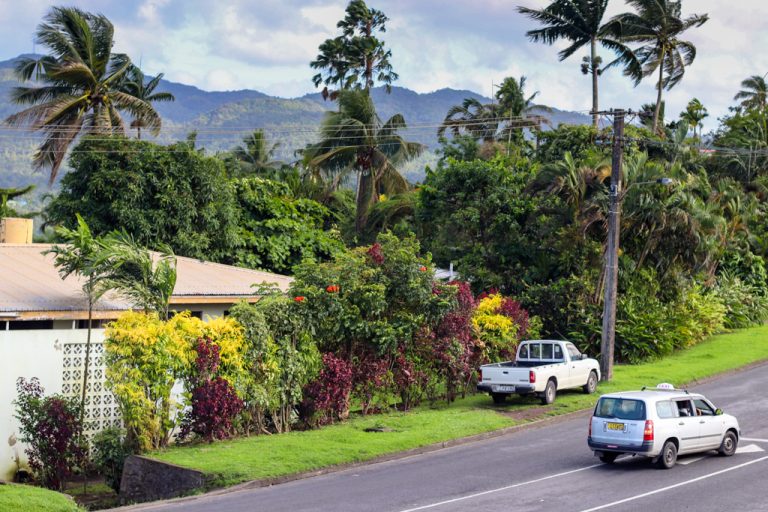 Driving in Fiji 101: Everything You Need to Know

As I catch up on my travels from the past few months, I thought I’d give a glimpse of what it’s like to live in Fiji as an expat — from the practical to the silly to the strange.

There’s a saying that, “Fiji time stops at the wheel.” After a taxi ride to the city center, you’ll understand that the phrase is spot-on in describing Fijian drivers. Hurry up and relax is the modus operandi. Fiji also refers to speeding as “over-speeding” which almost implies that a little speeding is okay, but let’s not get carried away, guys.

We’ve decided not to buy a car in Fiji. Taxis and buses are cheap, and we’d rather spend the money on a boat to surf the local reef break or on transportation to the other islands. Some of our friends, especially those who have lived in Fiji for a few years, do have cars. I’m happy to chip in for gas whenever I catch a ride.

Visitors can rent a car and drive in Fiji if they have a valid drivers’ license from another country (some excluded).

The Fijian government is making a strong effort to promote safe driving through quirky billboards and signs. Outside Pacific Harbor, there’s a billboard that says, “Drive like an egg – die like an egg.” And, “An arm and a leg – Drink driving has a price.” on the other.

Nothing like a little mortality check as you’re driving through paradise. 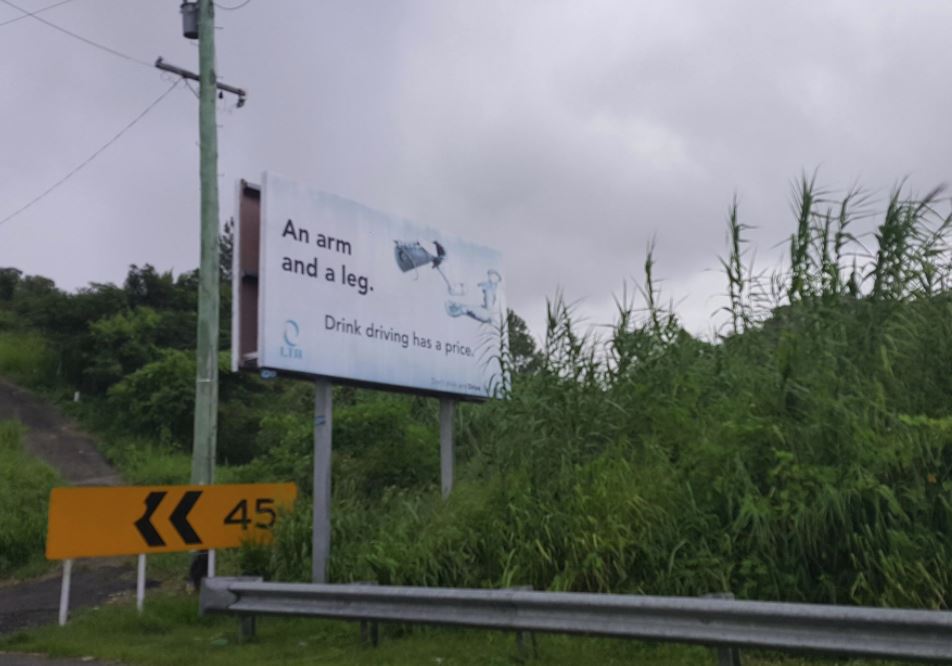 In the newspaper, you’ll often see quotes from the police with quips like, “If you drink and drive, we’ll provide the chaser.”

On a sadder note, one of the signs coming into Suva says, “The only belt your child needs is a seat belt,” nodding to two issues that plague every nation – child abuse and dangerous driving.

There is a spot in Fiji, near Sigatoka, where the speed limit says 60 km on one side, and 80 km on the other. What’s the correct speed limit? Nobody knows!

Here’s a letter from a local posted in the Fiji Times in 2015,

“I have been seeing misleading road signs lately. On one side of the sign it reads 60 km, meaning we can drive at that speed, but on the other side of the sign it reads 80 km and mind you it’s on a gravel road up at Tavakubu and another at Natabua near the Golden Age Home. I know that you can’t do 80 km on a bridge and only a fool would drive 80 km on the gravel road up Tavakubu Rd… Wake up Fiji Roads Authority, we know you can’t fix the streetlights but please fix those road signs.”

Taxis are my favorite way to get around in Fiji. Generally, Fijian taxi drivers are super friendly and know every part of Suva by heart. It costs around $10 FJD to cross town, and they’re very easy to flag down. I’ve never had trouble with the meter, either. 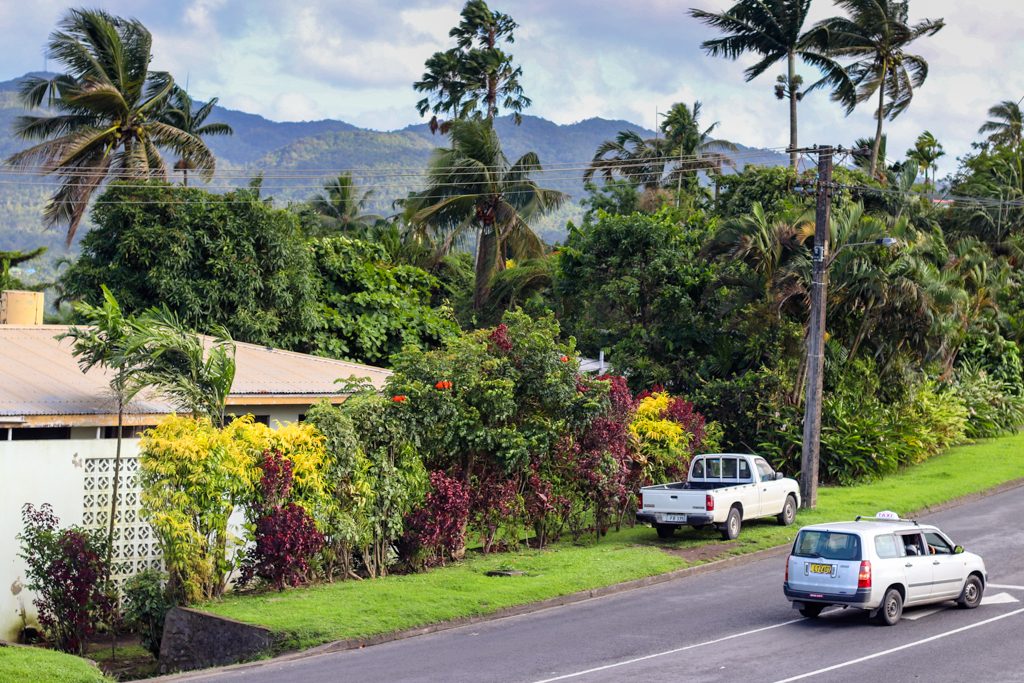 Some taxi drivers have pimped their rides and you might climb into one with colorful LED lighting, tens of mirrors, and stickers plastered all along the outside. All that’s missing is a pair of velvet dice hanging off the back mirror to complete the look.

Other taxis are rust buckets with suspiciously stained seats that make you wonder if you’ll make it to your destination without catching tetanus.  Any clank you hear is likely a few screws wriggling loose and dropping onto the road, like a breadcrumb trail. If you ever get lost, just follow the bolts back home.

Many taxis, however, are nice, used Toyota Priuses imported from Japan. The tariff on Toyota Prius is low, and they’re surprisingly robust enough to manage Fiji’s tough climate. Most of the Prius language settings have not been switched over from Japanese – so you’ll catch a few kanji whenever you hop in.

Many taxis put a thick layer of plastic over the seats, and they cut off or cover the rear seat belts since only the driver and front passenger are legally required to wear one.

Some taxi drivers are chatty (“Where do you live? Do you work here? Are you married? Do you have kids? What do you do? What does your husband do? You like Fiji?“) while others are dead silent. If I’m feeling upbeat, I’ll hop in the front seat and talk to my driver about topics I’m always interested in – like dating in Fiji and what they think of outsiders.

As we learned the hard way, many taxi drivers won’t pick you up if it’s raining. They don’t want to get the inside of their car wet.

If the bus hasn’t come, you can always try hitchhiking. Hitchhiking is common in Fiji, and I’ve done it in a group. If you’re standing at a bus stop, you can stick your thumb out and someone might offer you a ride. Usually, you pay the same as a bus far or a little less to get wherever you want to go. Give a ride, take a ride — it’s all about community.

As a woman, I wouldn’t hitchhike alone but it is a good option if you’re in a small group. I also wouldn’t do this if I wasn’t in the mood to make small talk with the driver.

There are a few types of buses that service Fiji. The most common one is an open-air school bus style bus that scoots around town. These are cheap, quick, and best for short distances.

The bus I typically take is the large, long-distance bus. These are air-conditioned, super comfortable, show movies, and sometimes even have WiFi. They drive like they’re a top contender in the Daytona 500, but again, that’s just the norm.

Sometimes, the driver won’t remember your stop – even though you’ve handed the driver your ticket. It’s wise to follow along with Google maps and hit the button to stop whenever I near the destination. The good news is that everything in Fiji is laid-back. You want to be dropped off on the side of the road instead of an official stop? Sure, why not.

The downtown bus station in Suva is notorious for theft. Whenever I walk around the bus stop, women tell me to cover my purse. These aren’t the words you want to hear when you are traveling with cameras, a laptop, surfboards, and clothes for the weekend, so I’m always relieved when we pull away from the station unscathed.

Taking the mini-bus in Fiji

These were my friends’ reactions when I told them I’d taken a mini-bus on a four-hour journey from Nadi to Suva. From their expressions, I couldn’t believe I survived! On my way down, a car swerved into our lane and hit the side of our mini-bus. Instead of pulling over to the side of the road for safety, the driver stopped in the middle of the road and refused to move until the situation settled. The cars behind us swerved into the incoming traffic lane to pass. Fortunately, it was only a minor accident, and nobody was injured. The mini-bus driver was not at fault, but these situations don’t exactly boost the reputation for mini-buses, right?

After the incident, our driver drove slow and steady on our way to Suva. Since this was my only experience with the mini-bus, I think I prefer the big boy.

Traffic and hazards while driving in Fiji

Aside from impatient drivers, you’ll have to contend with rain (it rains nearly every day), stray animals (especially dogs), and locals hanging out near the roadside. Many sections of the road are windy, so you must be constantly alert.

There is one mostly two-lane highway that weaves around the main island, Viti Levu, and links to every major village. The road quality is decent, though there are sections with potholes. Traffic can be terrible in Suva – especially around 8 am and 5 pm. Fortunately, since I work from home and Mo works near our house, we rarely need to deal with it. When the traffic gets really congested, you’ll see people complain about it in the Fiji Facebook groups.

Oh, and in Fiji, we drive on the left.

What else would you love to know about driving 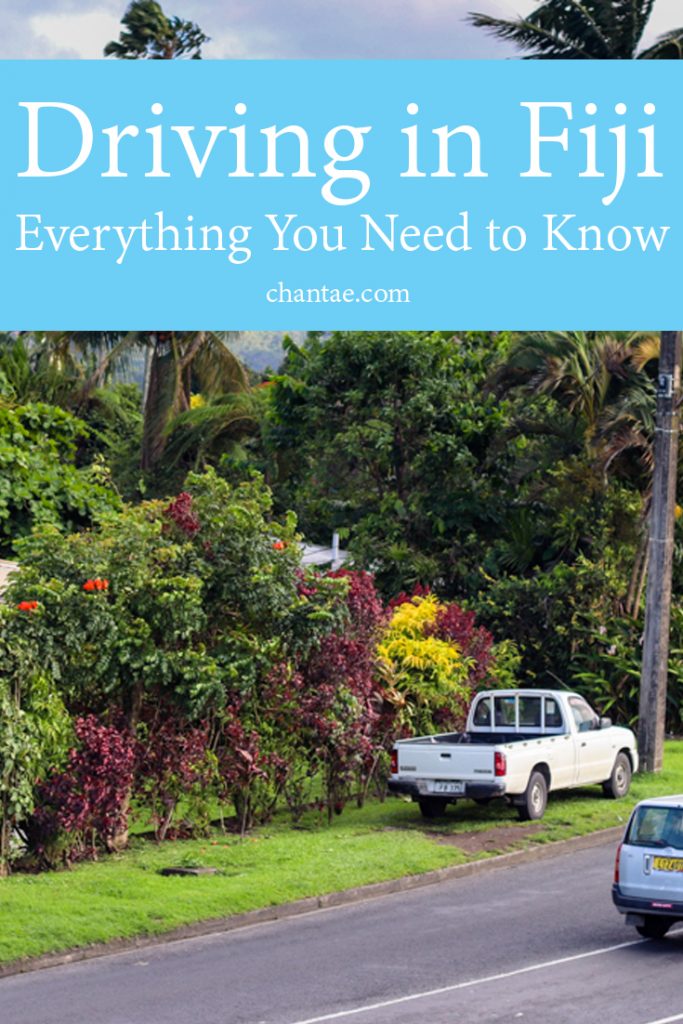 and getting around Fiji? 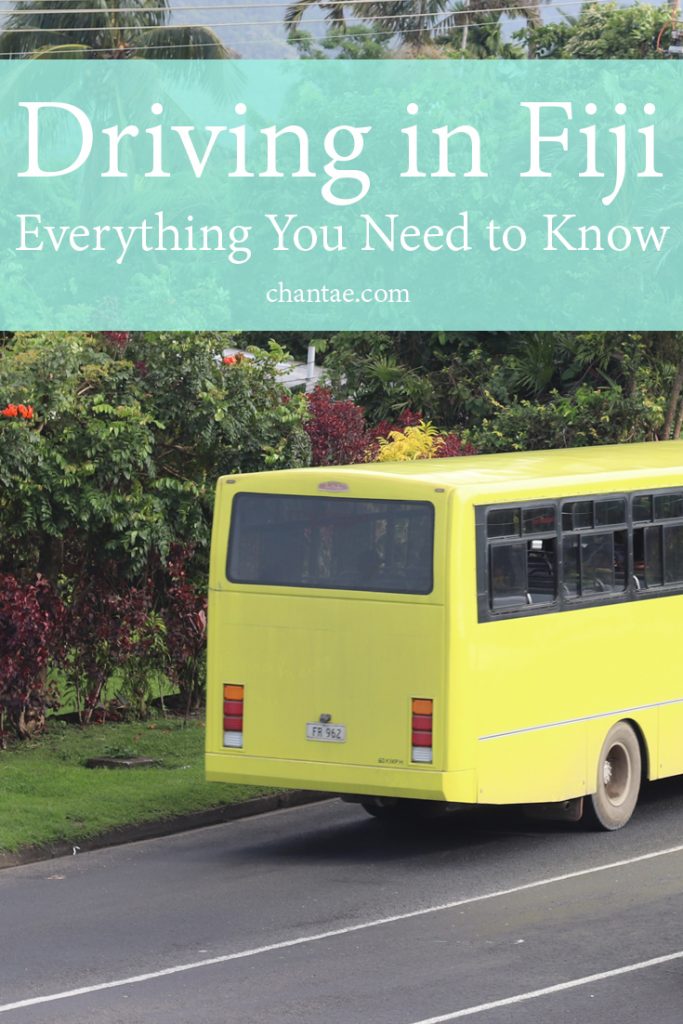