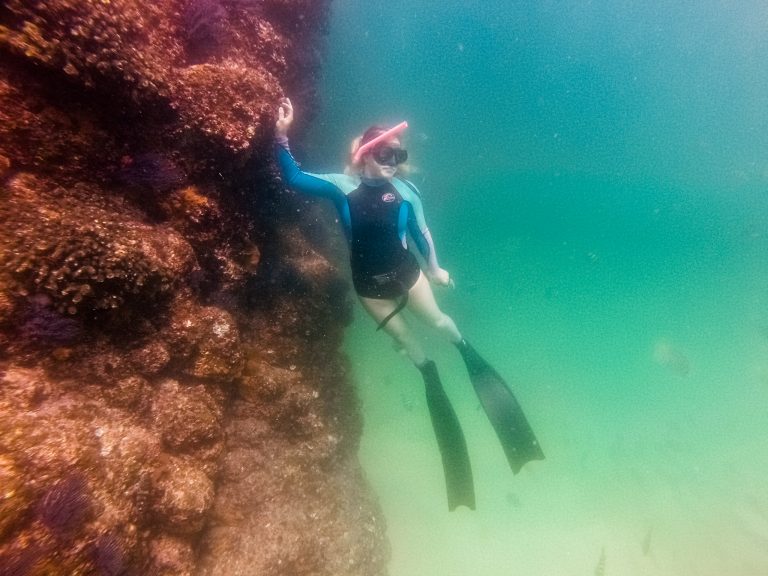 Diving with the Devil Rays in Cabo San Lucas, Mexico

Every year, thousands of devil rays migrate to the sea extending out from Cabo San Lucas. They glide in like fighter jets and often launch themselves out of the water, almost as if trying to fly.

Nobody knows why rays jump. Some theories speculate that the smack against the water aids in digestion or gets rid of parasites or that the leaps are used as a mating call (the louder the sound, the larger the male) or that it’s used as a form of communication.

I like to think that the devil rays jump to feel the wind beneath their wings.

My greatest chance of seeing these stunning creatures would be in Cabo San Lucas, our final stop on our Baja Peninsula road trip. 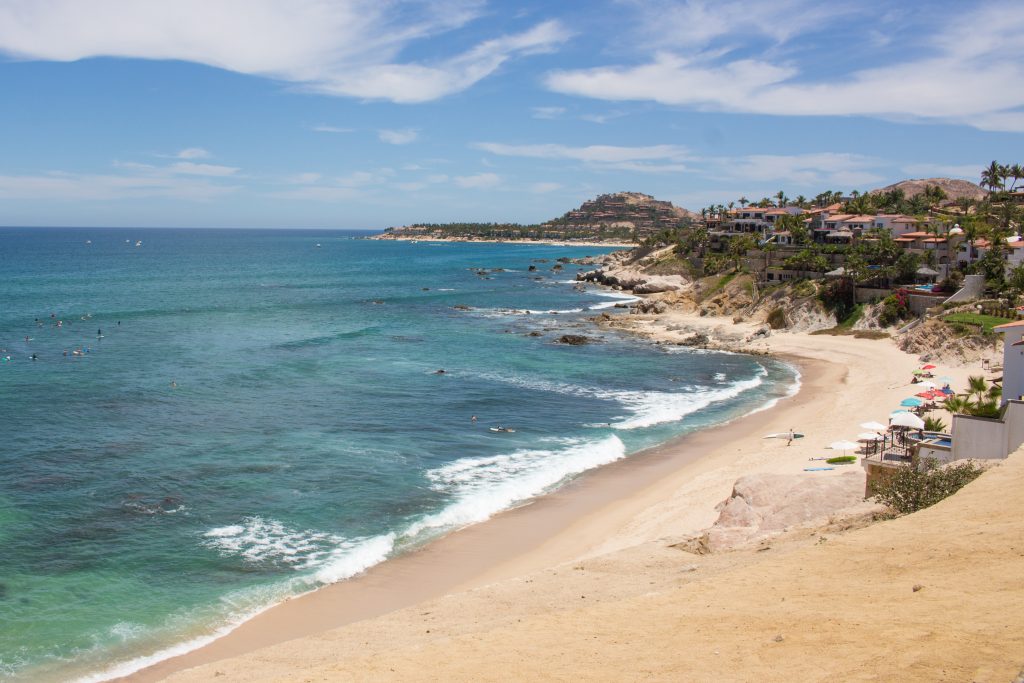 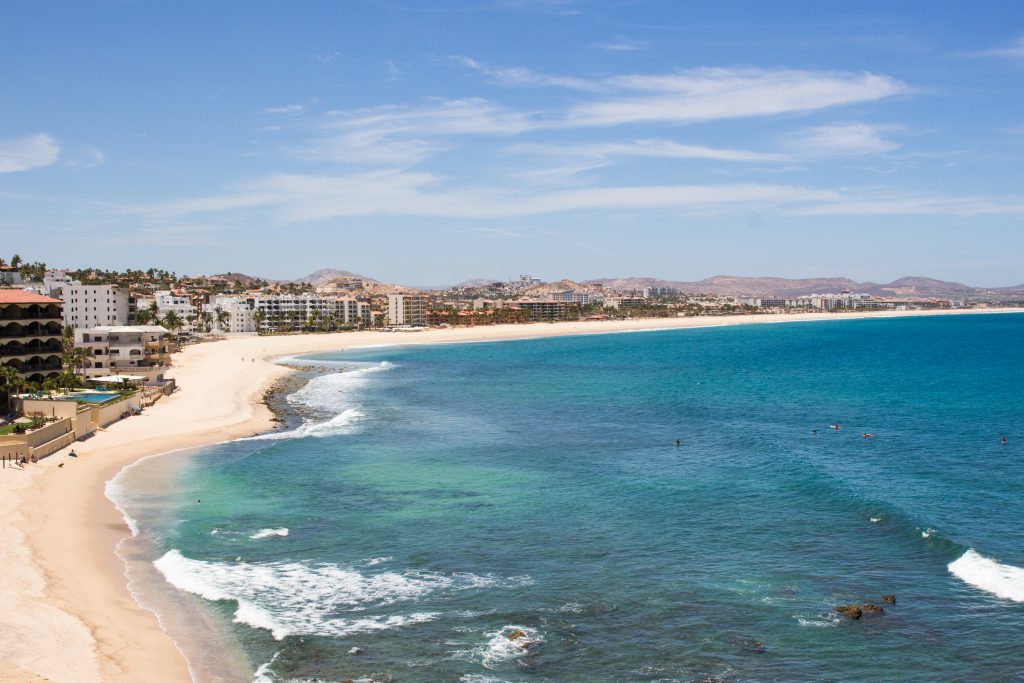 The Los Cabos region, which encapsulates the towns of Cabo San Lucas and San José del Cabo, is a popular vacation destination among divers, surfers, fishermen, and people who love to drink in the sun. We spent our first day in the area exploring the coastline in search of surf and found waves breaking every few miles. 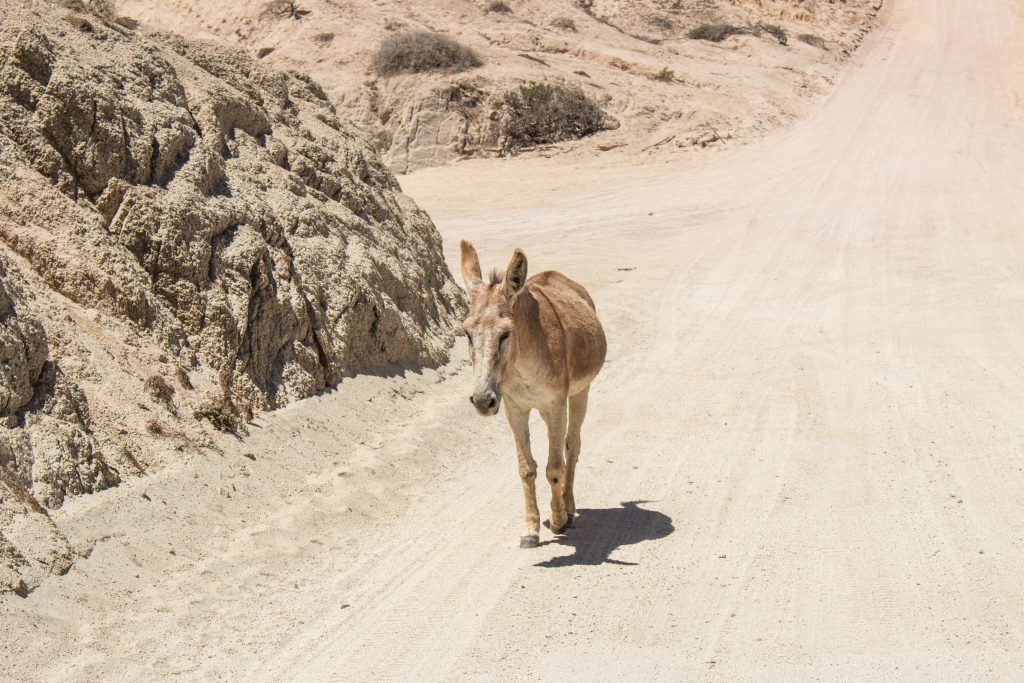 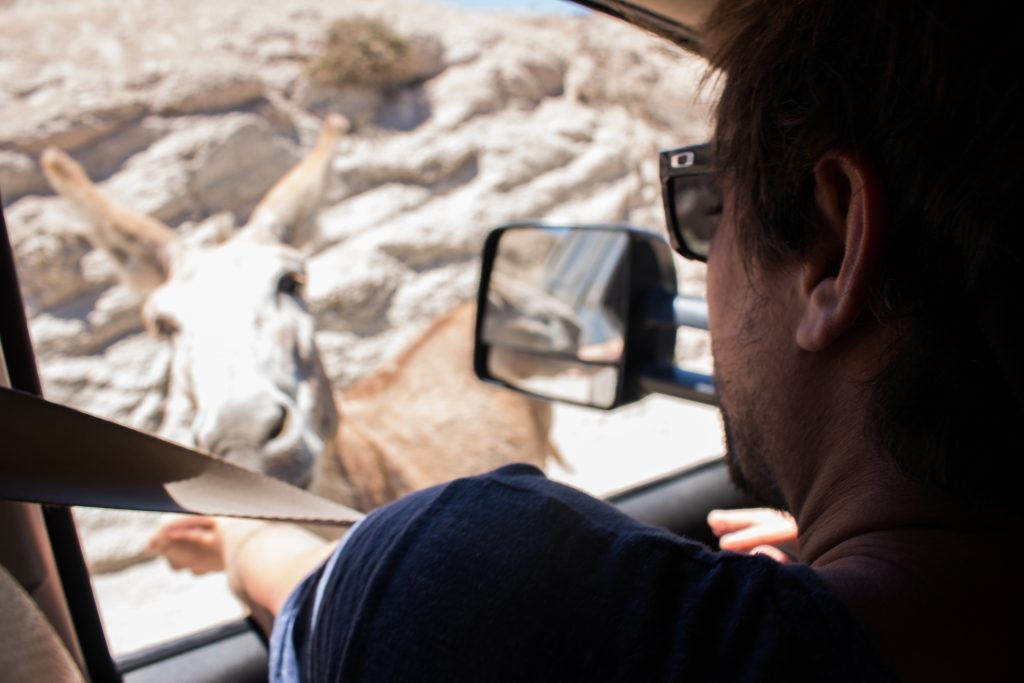 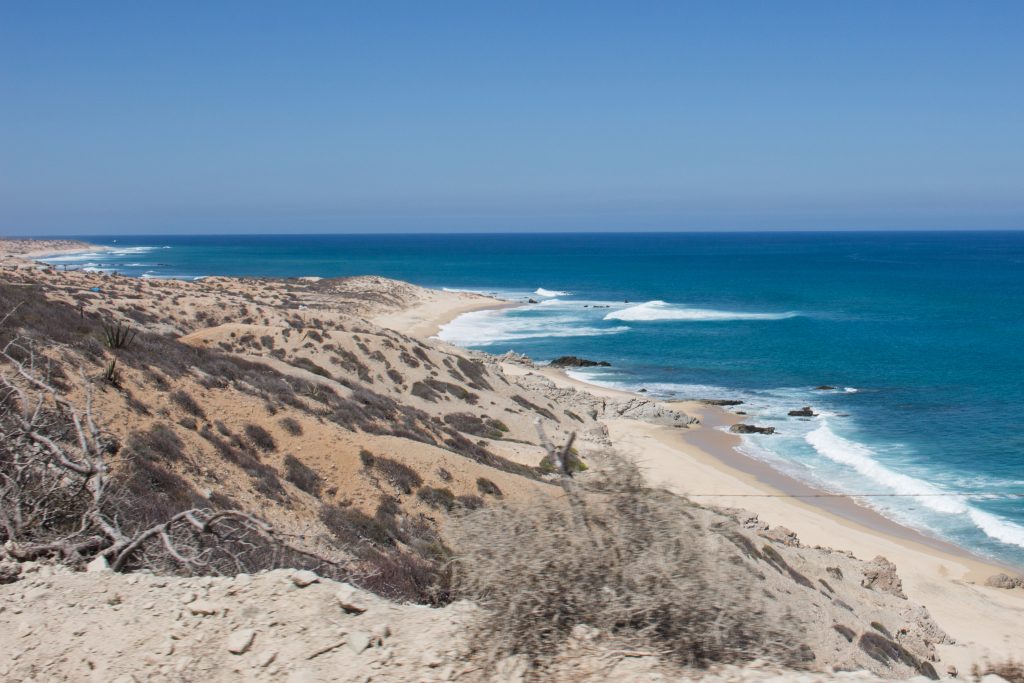 When we checked into Ocean Tigers, the best freediving school in Cabo San Lucas, I crossed my fingers and hoped we’d see devil rays.

Mo completed his AIDA** freediving course with Benoit, the owner of Ocean Tigers and one of the most experienced freediving instructors in the industry. I never freedive without a buddy, and now that Mo was certified, we could explore the Sea of Cortez with lungs of both the human and aluminum kind – whatever the occasion called for.

Ocean Tigers is somewhat of a safe-haven for freedivers and underwater junkies obsessed with sea life. The staff members there were so friendly, I opted to stay in and work all day on one of our days in Cabo San Lucas – aka chat to the cool and laid-back receptionist.

A fellow guest ended up being renowned photographer Christian Vizl, who’s underwater shots are stunning. He told me that he’d spent the previous few days capturing shots of hammerhead sharks off of Cabo San Lucas and I could’ve fainted right then from envy.

On our first day of diving, we strapped on scuba gear and shuttled out to The Arch, a sandstone arch that jets out from the Cabo San Lucas marina. I crossed my fingers and hoped for rays. I would be happy seeing just one or two. 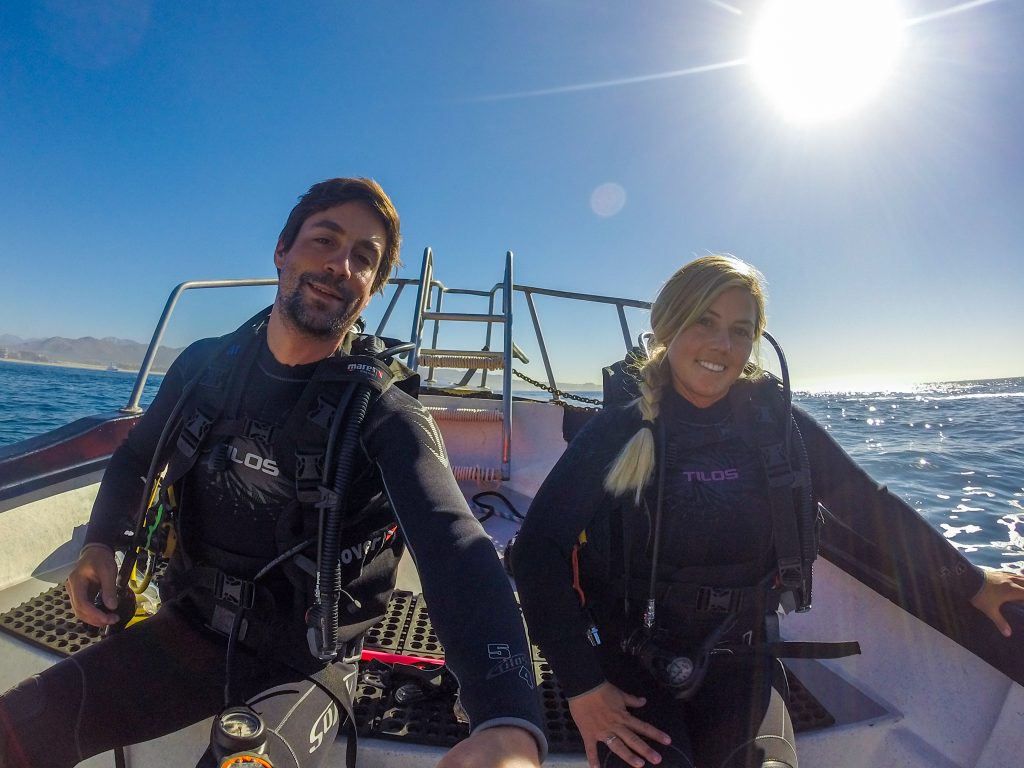 But the number one rule in managing expectations when you dive? Nothing is guaranteed.

We hopped into the dive boat and drove beyond the arch, Cabo San Lucas’s most iconic structure. We could spot sea lions, turtles, and schools of fish from the bow. 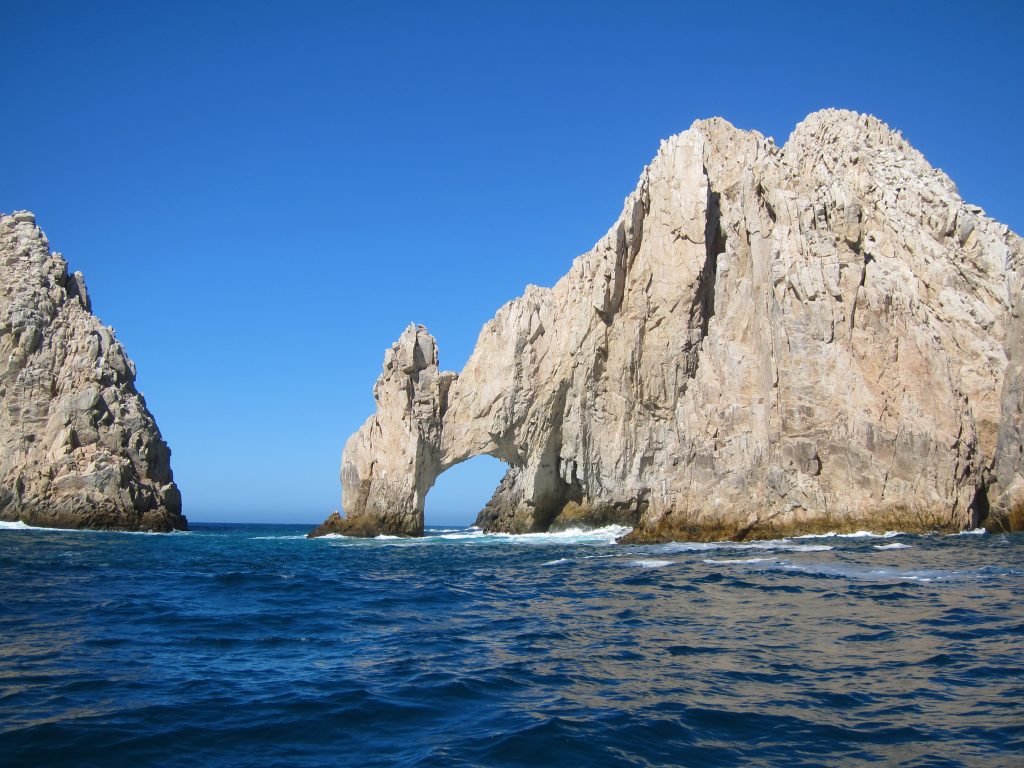 We jumped overboard and sunk below the surface. The sound of the boat engine was replaced with the darth-vaderlike hiss of my breath inhaling and exhaling through the regulator. I felt at ease. I tried to adjust my sight to make out shapes in the blue that surrounded us. 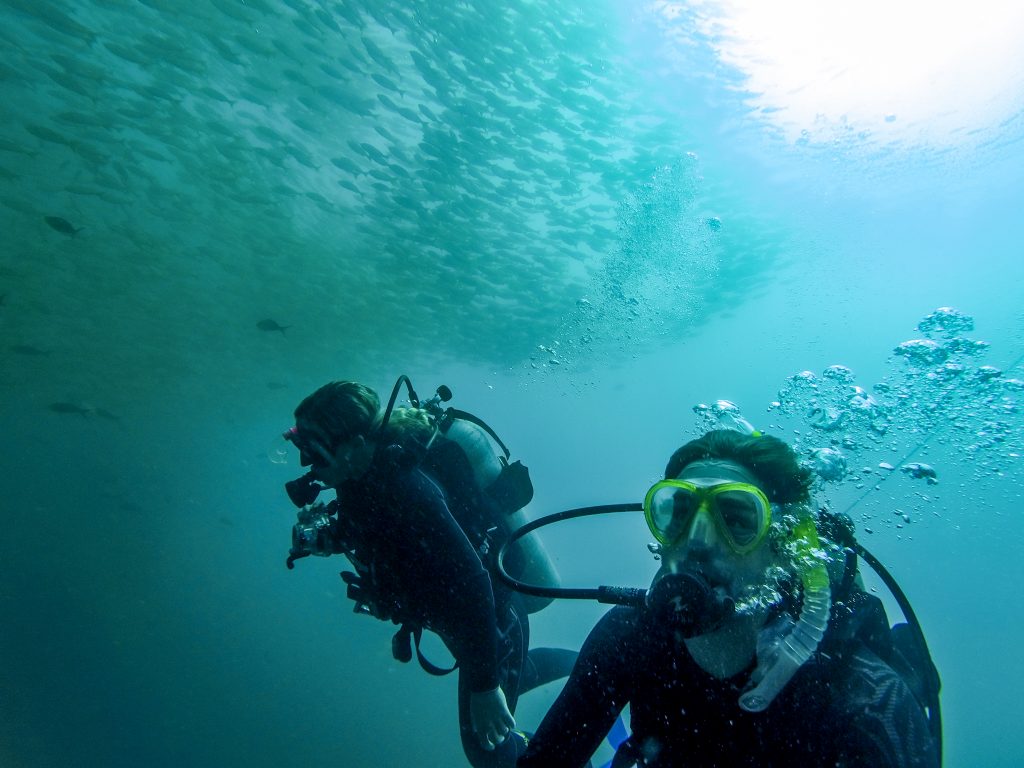 Since there was a strong current off the reef, we had to switch from swimming along the reef to swimming into the blue. Benoit, our guide, would swim out into the ocean and scout for rays to no avail. Eventually, we came across a massive school of hundreds of small fish surrounding us on all sides. They morphed around us, fearful of us being close but not fearful enough to flee. 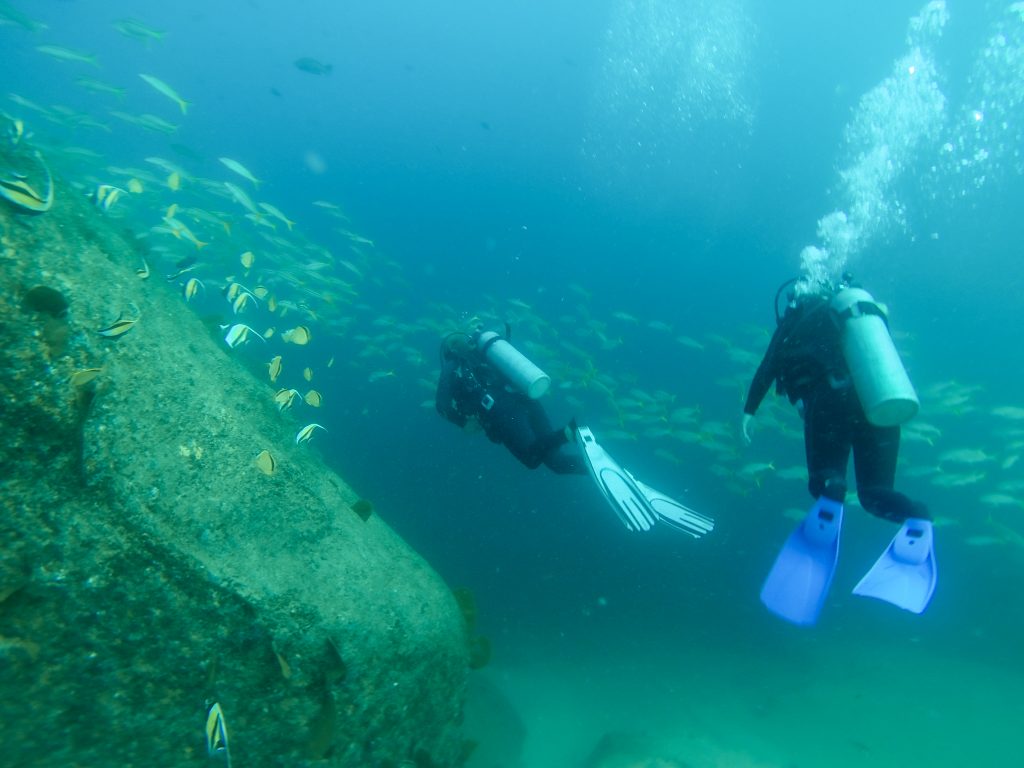 At the halfway point in our dive, we searched for devil rays again.

Benoit tapped on his tank and motioned for us to follow him. We swam out into the blue and saw a dark cloud of small devil rays swooping through the sea. The devil rays were so dense, they blocked the sunlight from reaching us and you could almost feel the temperature drop. We followed them for a short while – but they were too fast and disappeared into the blue. 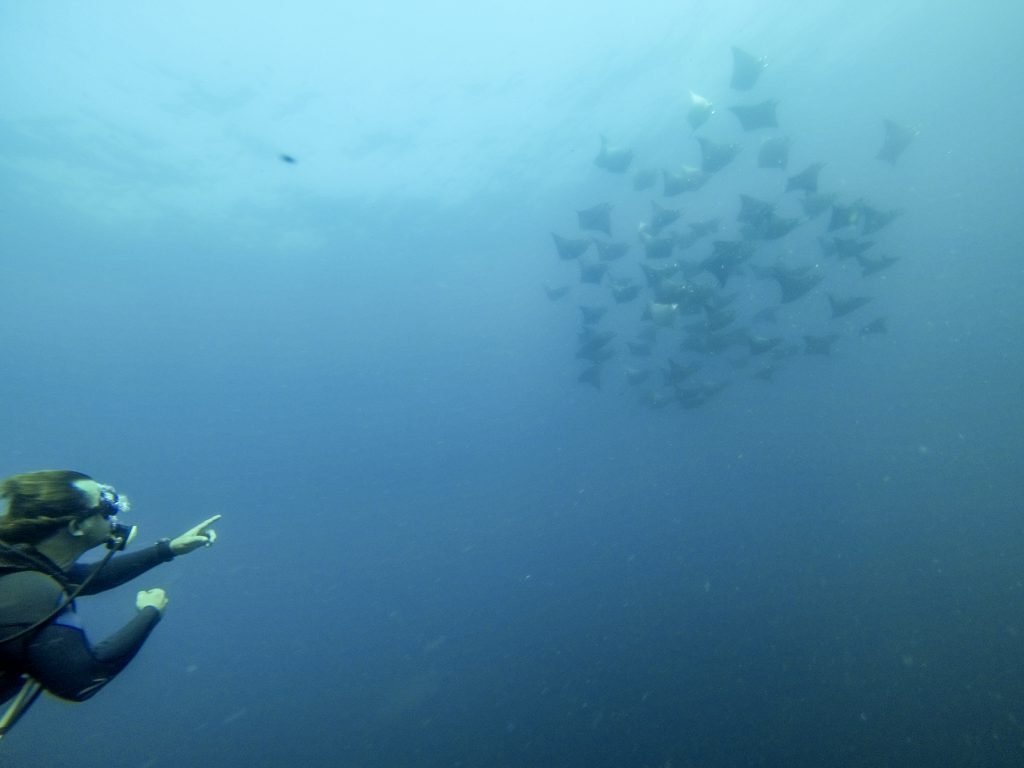 The excitement of seeing devil rays had me guzzle air faster than normal and we had to return to the surface. 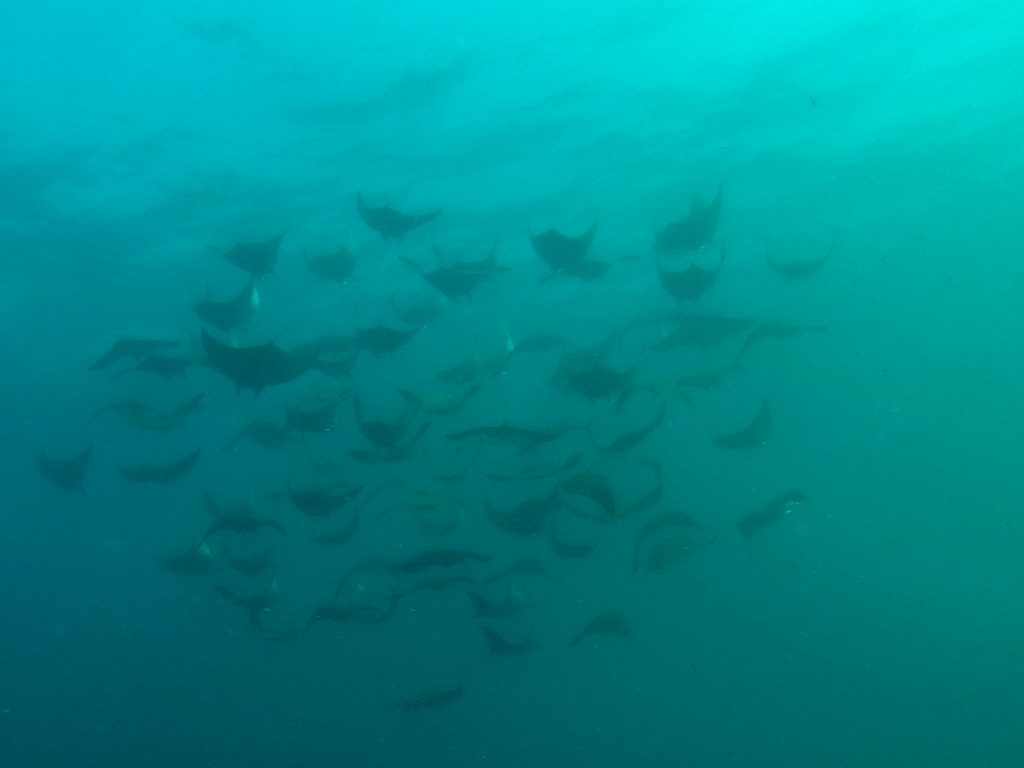 “Are you happy?” Benoit asked.

It didn’t matter how the rest of my trip to Cabo San Lucas went – I knew I’d experienced the highlight already. 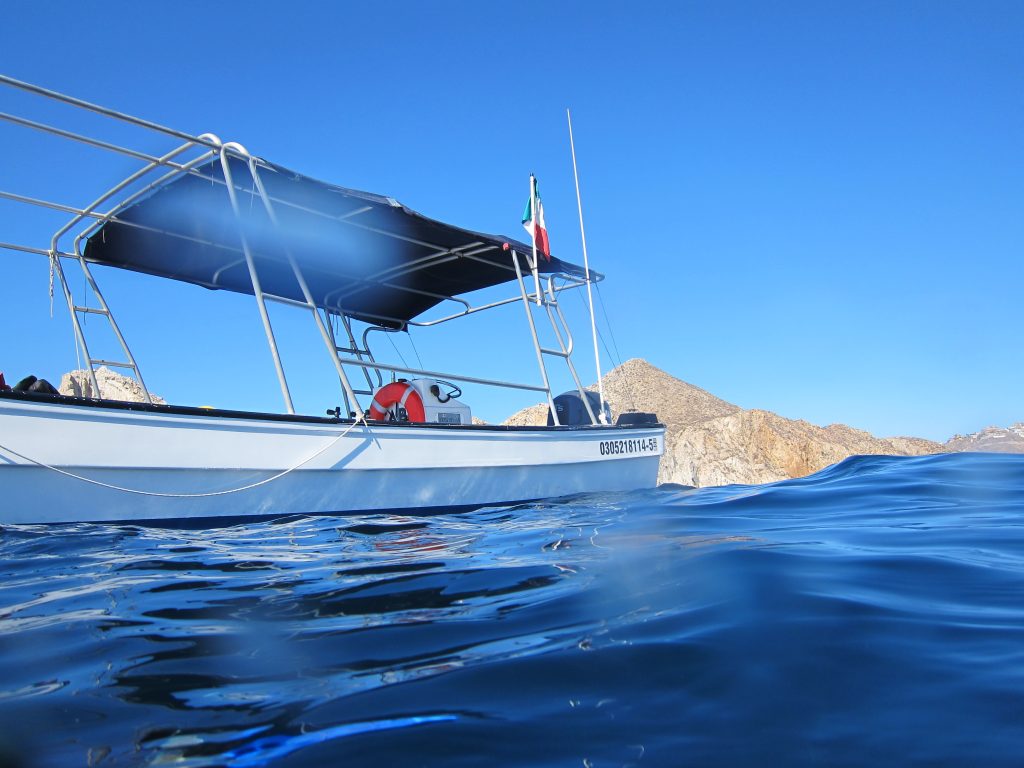 On our second dive, we wanted to go deeper and see an underwater sandfall – a point where sand poured off a ledge as if it were a waterfall. Two stingrays surfed down the sandfall and launched into the blue, riding the sandfall like a slide. We also saw two mating nudibranchs (#nudies!), green moray eels, and small fish that hugged the reef, using it as shelter.

For the next few days, Mo woke up to a sand-dusted pillow because no amount of scrubbing and washing could get the fine particles out completely. Still, he deemed the experience of bathing in an underwater sandfall was worth it. 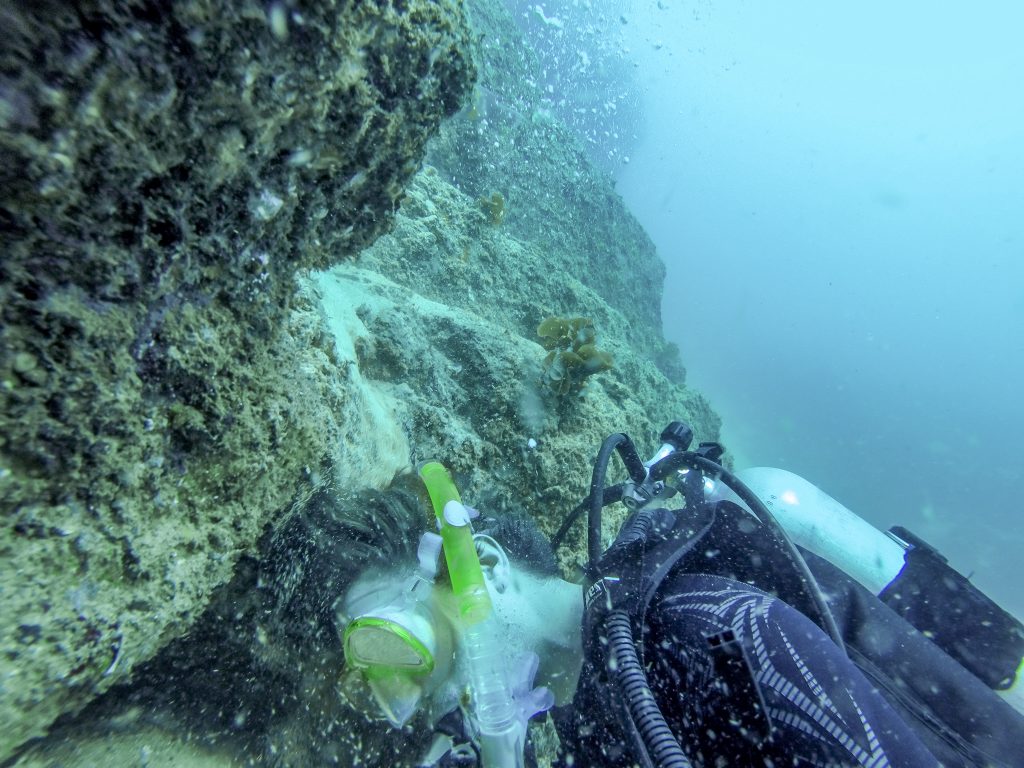 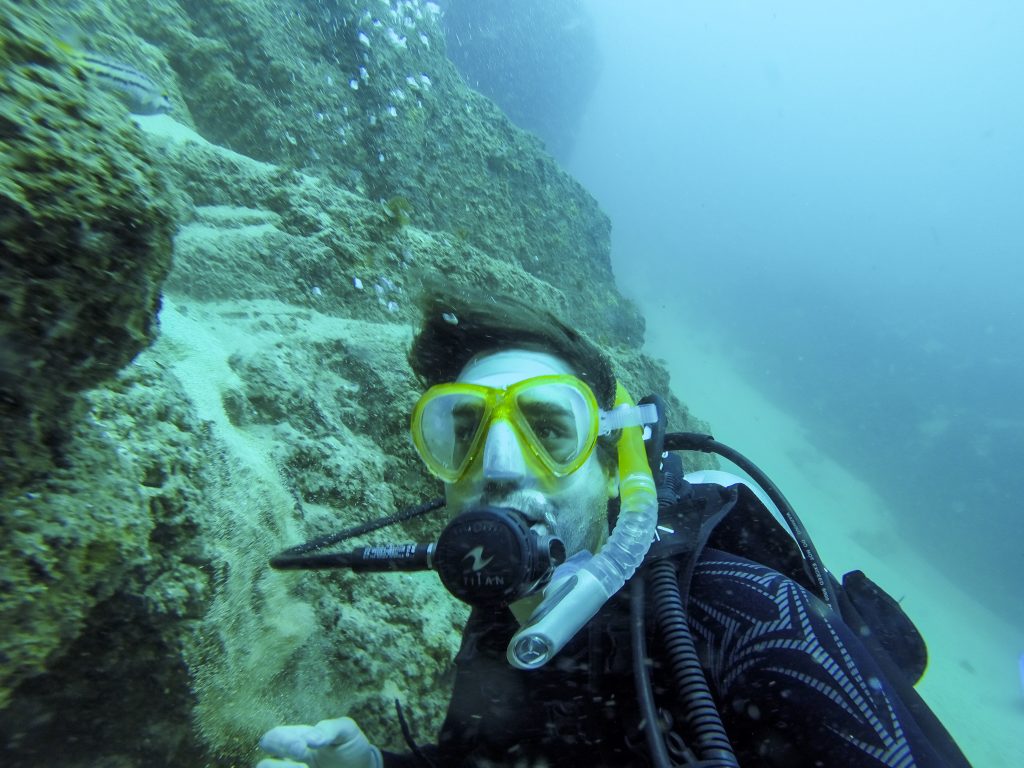 We ventured back to the same dive sites with our freediving gear to see the region on a pair of lungs. It was easy to D.I.Y., simply catch a ride over near the arch and jump in. Cabo San Lucas is notorious for partiers and tourists who aren’t exactly sea savvy. Unfortunately, because we were afraid that we’d be hit by a snorkeling tour boat or drunk jet ski driver, we could only dive within the snorkeling buoys. Every time I dived beyond the buoy, I was afraid to surface. 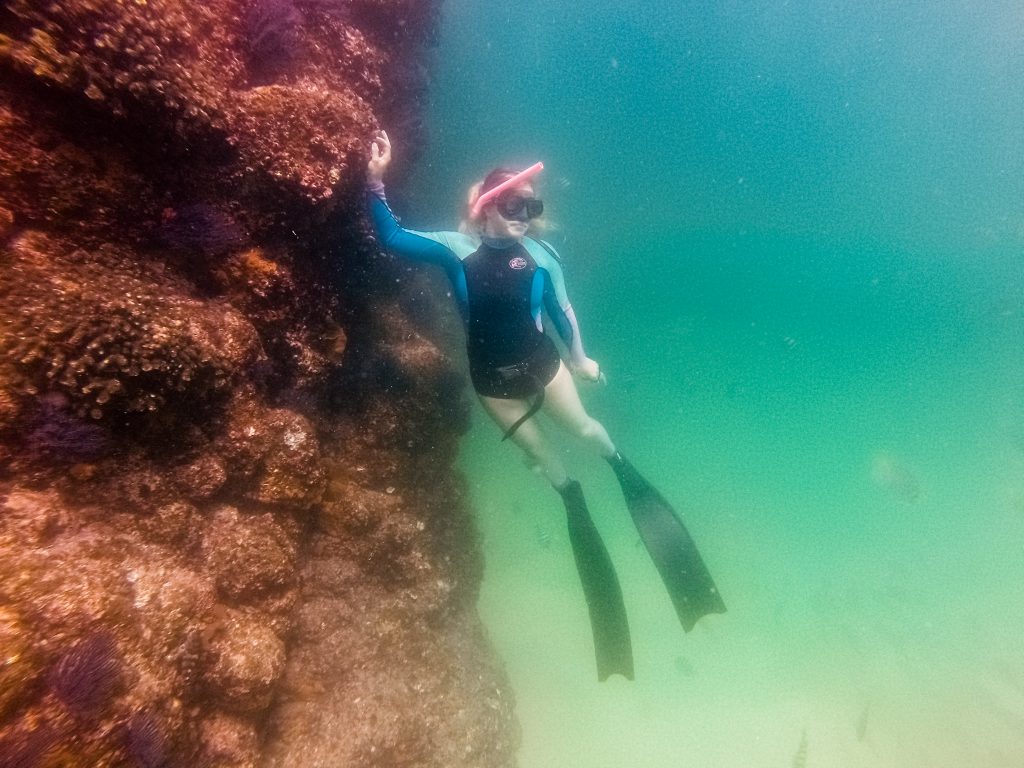 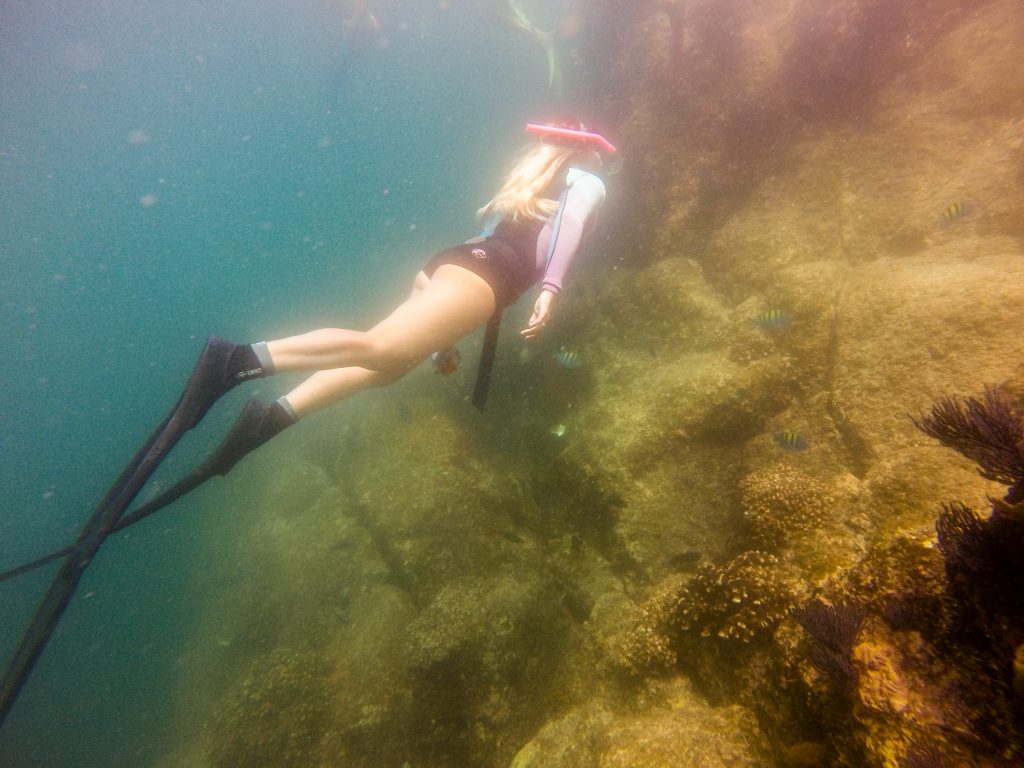 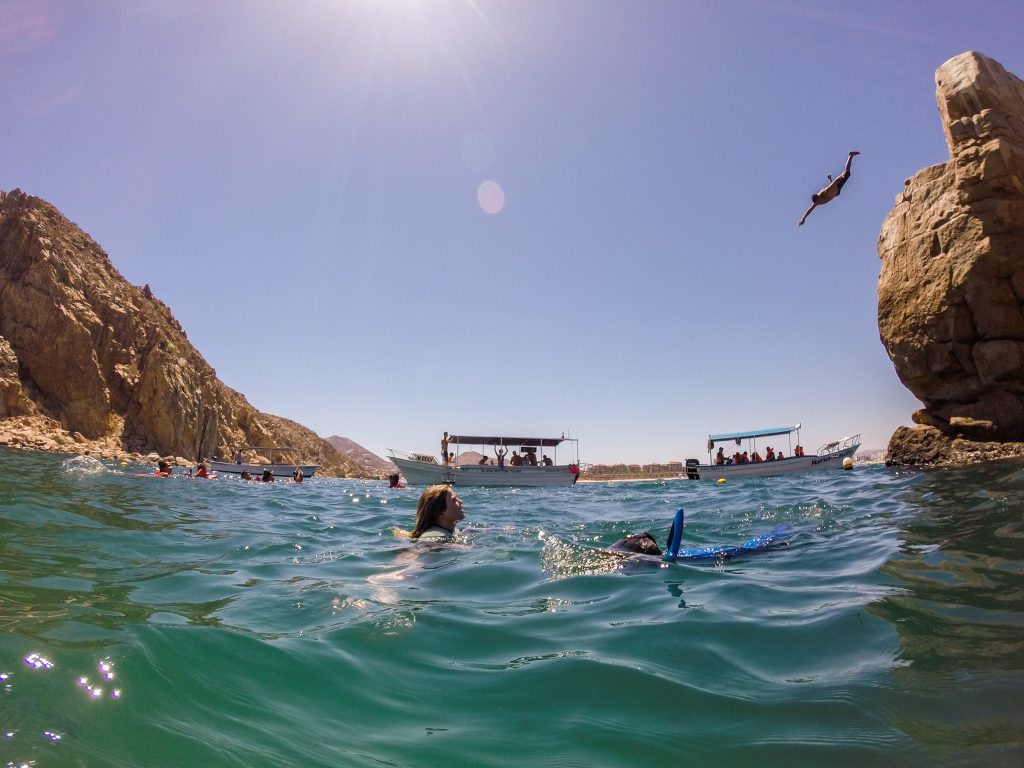 For me, any day in the ocean is better than any on land.

When the sun goes down, people flock to the main streets of Cabo San Lucas to party. You’ll hear men calling out for you to buy, “weed, blow, weed, blow” and women in skimpy clothing will grope just about anyone for a tip. One bartender in torn fishnet stockings and little else tossed me a Jello shot, squeezed my breasts, and then demanded five bucks. Travel tip: If you want the experience for free, just step into a frat house.

I’d drop a fiver on not having to go through that again.

We spent one afternoon at Mango Deck Beach Bar, where drunk tourists went up and chugged beers for prizes. The scene felt like college spring break, though the patron demographic were middle aged Americans with leather skin, oversized implants, and beer bellies (sometimes a combination of all three). The tourists chugged drinks on stage while older Mexican men and women walked around selling headbands with derogatory remarks on them. Apparently, misogynistic and lewd quotes are all the rage in Cabo San Lucas among tourists — who knew!? 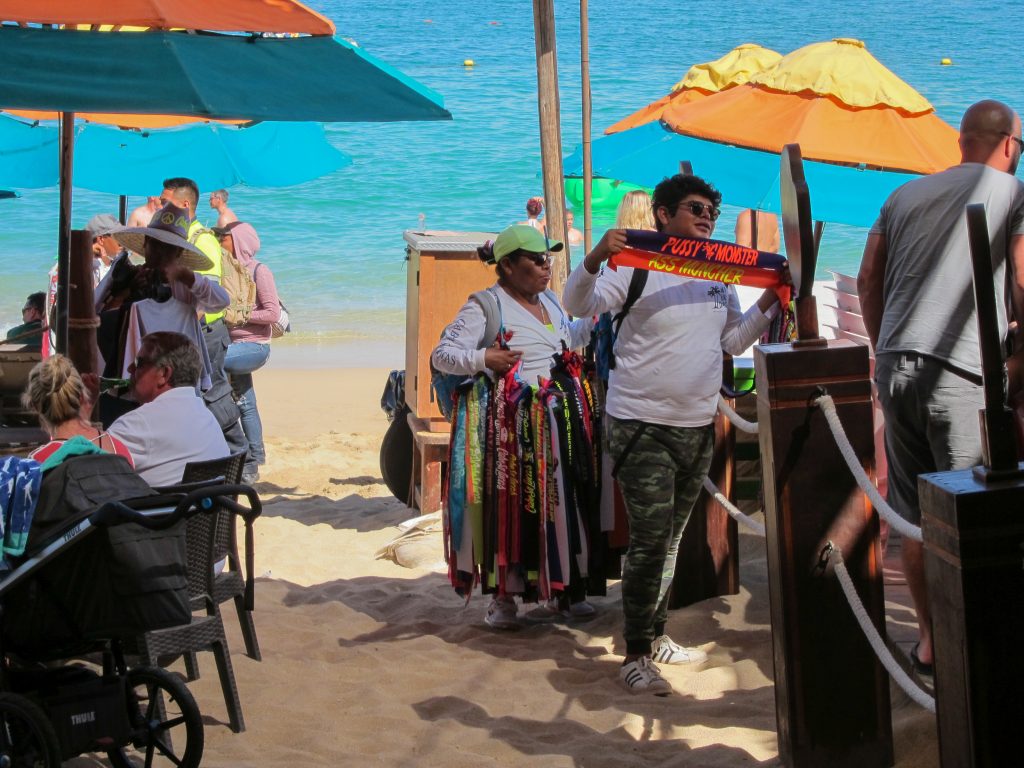 Though the party scene is pretty good if you’re into loud music and snorting crushed lightbulbs, the highlight of being in Cabo San Lucas (aside from the sea life) is unlimited access to delicious food and mango with Tajin, a chili-lime seasoning.

Before flying back to the states, we spent one last day exploring the beaches surrounding Cabo San Lucas and surfing wherever the waves looked good. Because, anxiety, it wasn’t my best surf trip ever but I still had a great time seeing the different breaks — some of which are never published online. 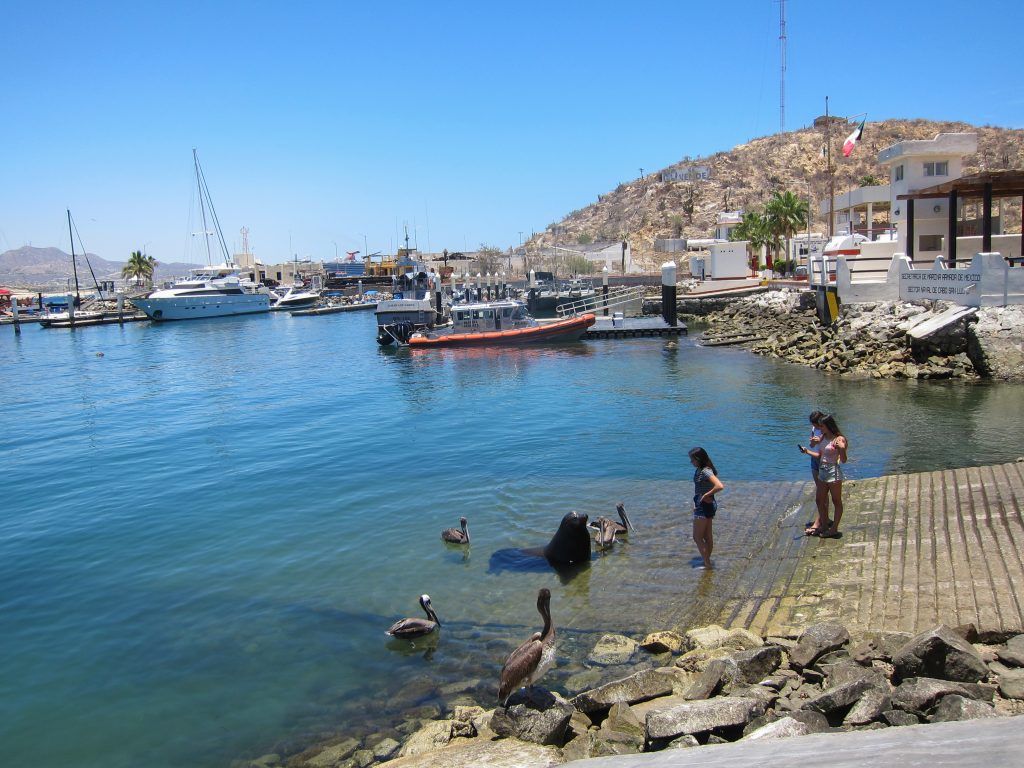 Unfortunately, the towns of Los Cabos aren’t simply a vacation route where you can get wet. Like many parts of Mexico, Los Cabos are negatively affected by violent drug cartels who commit atrocities that the Mexican tourism board would rather tourists not see. I say this not to put a damper on Cabo San Lucas – I love the region and would revisit again tomorrow if given the chance — but I am also a strong advocate for not making every destination look like it belongs in a Disney movie. 2017 was Mexico’s deadliest year in modern history.  As a tourist, you are largely blind to and protected from the crime that plagues Los Cabos.  Stay vigilant and if you have doubts about venturing off the tourist track, its best to stick to the road well-traveled.

Follow the whole journey!
The Ultimate Guide to Driving the Baja Peninsula
From Mexico to The Wall
A Tale of Two Nazis in Mulege, Mexico
The Final Stretch