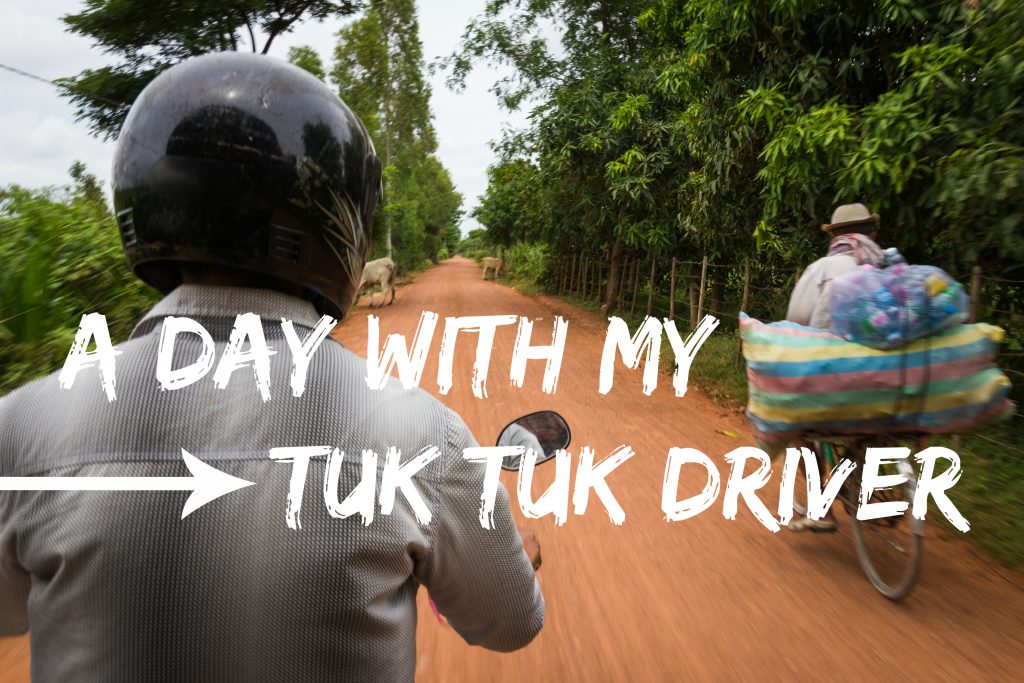 A Day With Our Tuk Tuk Driver in Siem Reap

A crowd of tuk tuk drivers gathered around Collette, two newly befriended travelers, and me. Even though we already declared our loyalty to Lomrond, our tuk tuk driver for the day, others clustered around us partially hoping to make a stray buck but mostly because they had nothing better to do. It was low season in Siem Reap, and tuk tuks with empty carriages saturated the streets. “We don’t want to be taken to where the tourists usually go,” Collette explained, “We want to see what you like to do for fun.”

Rewind to the night before, when Collette and I sat on our hotel beds and scanned TripAdvisor. The nearby floating village was overwhelmingly rated a gleaning 1 star due to opportunistic scammers and the page was flooded with comments like, “It felt like we were watching the locals like they were animals at a zoo.” Most of the activities listed were either expensive, filled with child-run souvenir shops, or had a well-known ring of scam artists running the show.

Half of the tuk tuk drivers in the group couldn’t speak English, but picked up enough phrases to hold their interest. The other half of the group engaged passionately, listing nearby waterfalls, rivers, towns, and activities for us to do. They told us that the day would go by much faster if we each took our own driver – an idea that we shot down immediately. (But hey, can you blame them for trying?) At the end of the conversation, the ringleader of the group requested a dollar, and the non-participants eagerly hung around to see if anything would be thrown their way. Our driver, overwhelmed with a proposed itinerary of every local’s favorite thing to do, scratched his head and asked us, “So… would you like to see my village?”

With every mile away from Siem Reap, the roads became quieter. The honking and buzzing sounds of the city were replaced with birds singing and children laughing. A father and son drove past us on their motorbike. The son held tightly to a freshly butchered pig draped over the back seat. Women tilled bordering rice fields, and little boys jumped off of bridges into ponds. Where simplicity existed, silence followed. “Many people in Cambodia are very poor,” Lomrond said as we drove past an elderly man with a large bag of grain slumped over his crooked back, “I am lucky.”

We pulled into Lomrond’s local temple and admired the ornate detail spanning across every inch of space in endless shades of gold. The local cemetery stood out front – where families shared one large headstone – and a small neighborhood of tiny wooden houses lived behind the temple. The neighborhood was the village’s version of social welfare. Money donated to the temple trickled to the wooden houses to support the town’s poorest families. Lomrond led us down a long dirt path to his home built of concrete slabs. Unchained, the resident cows, chickens, dogs, and pigs roamed through the yards. Lomrond’s three children shyly hid behind their mother while Lomrond offered us a coconut. Little did we know that getting said coconut would involve him climbing the property’s coconut tree with a butcher knife in tow. He quickly changed out of his driver’s uniform and gathered a piece of cloth for his ankles to help him gain traction to scale the coconut tree. We cheered as he made it past the powerlines, hacked the coconuts, and scurried back down in the midday heat. Of course, a group of foreigners in the neighborhood drew a small crowd. Nearby, a group of children hid in the bushes and yelled “hello!” They giggled when we echoed it back. One of Lomrond’s friends came over – also a tuk tuk driver in Siem Reap – and they both told us the woes of the job. They liked the customers but the competition is fierce.  Sometimes, it will be a week or two before they can get a customer for the full day. Prior to being a tuk tuk driver, Lomrond went to Thailand as manual laborer for months at a time to raise enough money to buy a house. Lomrond’s entire family lives in his neighborhood and they all share one water well. Next door, his sister-in-law weaved intricate baskets. Each basket took her 8 hours to make, and she sold them for less than $1 to businessman who exports them to Thailand where they’ll be sold for $3. I couldn’t help but immediately calculate her hourly wage which is much less than what the average ten-year-old gets as pocket money in the Western world. You probably know by now that I’m a vegetarian, and traveling through developing countries is an enlightening experience when it comes to the meat industry. So, when the others agreed to check out a silk factory, I knew I’d be in for a stomach-churning surprise.

At each step, our tour guide for the silk factory loudly and blatantly reminded us of the little silkworm’s fate.

A pile of silkworms ate leaves on canvas, wriggling and crawling on top of each other.

“This is where we feed the worms and make them fat. Then, we will kill them.”

The silkworms then were transferred to a spiral basket where they’d build their golden cacoons.

“This is where the silkworms will sleep before we kill them by putting them in the hot sun to be killed.”

The silkworms and their cocoons, dead and dried, are then put into boiling water, “In case they are still alive, they will die in the hot water.”

Yeah. Okay dude. We get it.

I imagined myself as a fat ugly grub, weaving myself a nice little silk cocoon to just do some casual metamorphosis in. Yeah, I’m a little chubby blob that can barely walk – but that’s okay because I’ll have wings soon and I’ll be free to fly like a freakin’ phoenix soon! Meanwhile, the irony is that my fate will be turning into a piece of shiny cloth that will wipe some rich man’s nose one day.

“Even if one caterpillar broke free and the caterpillar was able to make its own cocoon and survive in the wild, when it turned into a moth, it wouldn’t be able to fly. Due to the inbreeding, the wings of the moth are too small to fly. Then it will certainly be killed by a bird.” Ah, okay. So the little fellas were doomed from the beginning. That makes everything better.

Horror for the silkworms aside, the industry provides well-paying jobs to people who might have none otherwise. Many of the women working in the factory once worked in the sex-trade industry and one man whose legs were amputated by a landmine would have a hard time finding work elsewhere. For sunset, we went to a nearby lake without another foreigner in sight. Here, local Khmers rent hammocks for the afternoon and order snacks from the food stands. It’s the perfect day out with the family, where children can swim and play while the adults lounge in the background. Unfortunately, I felt like a misplaced tourist and had an subconscious urge to hide my camera. The locals didn’t seem to notice us, however. Aside from an occassional double take at us walking along the shoreline, they paid us no attention.

Lounging near bodies of water with a drink in hand is apparently a universally great way to waste time. It is always in these moments that I feel torn between two worlds. I belong to my own culture but I want to intimately know another. While I urge everyone to go off of the heavily trodden tourist track, I know that that type of travel is not sustainable. Souvenir shops, scams, and curated experiences follow the penny trails that travelers leave in their quest for authenticity. Even when asking to be led completely off of the guidebook grid, our tuk tuk driver couldn’t help but take us to a silk factory – an industry that exists solely for outsiders. Thanks to our backgrounds, accents, skin color, and wallets, we could never really immerse ourselves completely into Cambodia. Still, after sharing a coconut with our everyday tuk tuk driver and seeing him stroke the head of his newborn baby, I can’t help but think that hopping in a tuk tuk and asking your driver to take you anywhere is one the best ways to travel. The two friends I made on this trip, Sam and Paul, had been using Lomrond as their driver for a few days prior to this. They highly recommended that we continue with Lomrond as our driver because they’d established a connection with him. Lomrond only charges $10USD for a full day of work ($5 below the average price), and not once pressures you into going back early like many of the other drivers do. We felt his service was so good that we paid him 5x his asking price for this day and really, that was still such a deal for us! I suggest using Lomrond as your driver for temple tours and around Siem Reap for your stay – you won’t regret it. You can reach him at 0889192806.