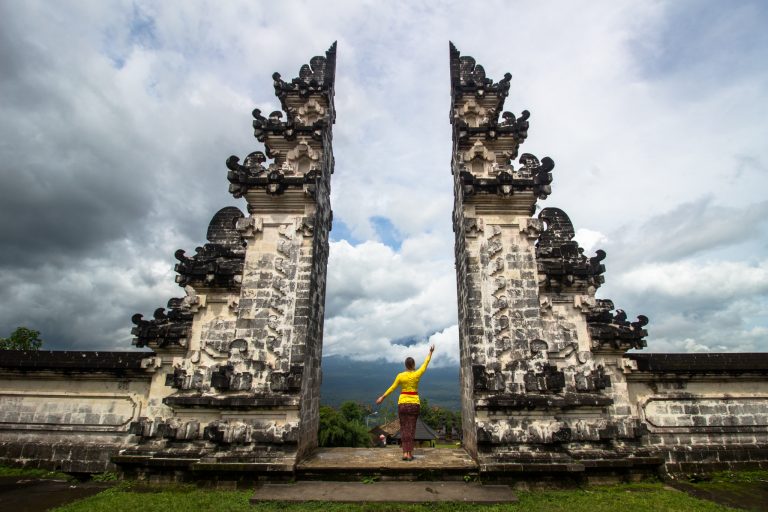 On Daily Offerings and Walking the Stairs of Lempuyang Temple

Ketut’s hands worked quickly in the quietness of the morning. She has already washed and swept the front of the shop where she will be placing one part of her canang sari, or offering, made of weaved palm leaves and filled with intentionally flowers, incense, rice, a piece of candy, and a cigarette. 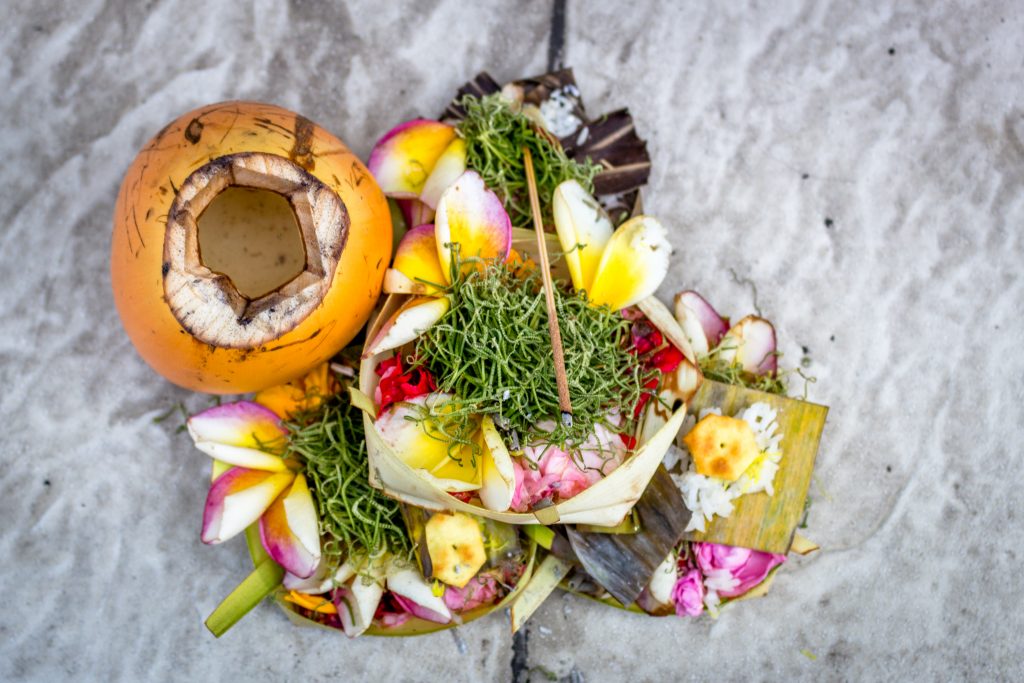 I walked near Ketut and gestured towards the canang sari, she asked me if I wanted one of my own.

“It is a prayer. It is both a thank you and a request to keep the world safe.” 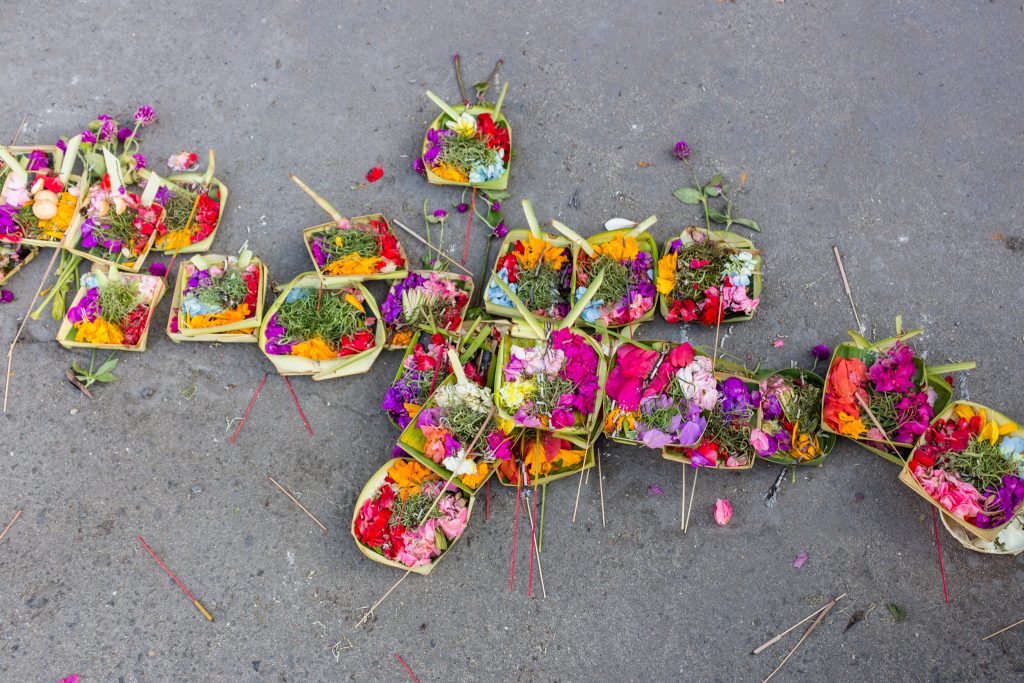 Thousands of these offerings are set in significant spaces of Bali every day. They dot the front of homes, shops, in busy intersections, popular beaches, up high in the family’s spirit home, throughout the temples, and anywhere that the Balinese Hindus deem meaningful.

These offerings appease the demons and please the gods. They acknowledge that evil has just as much influence over the world as good. 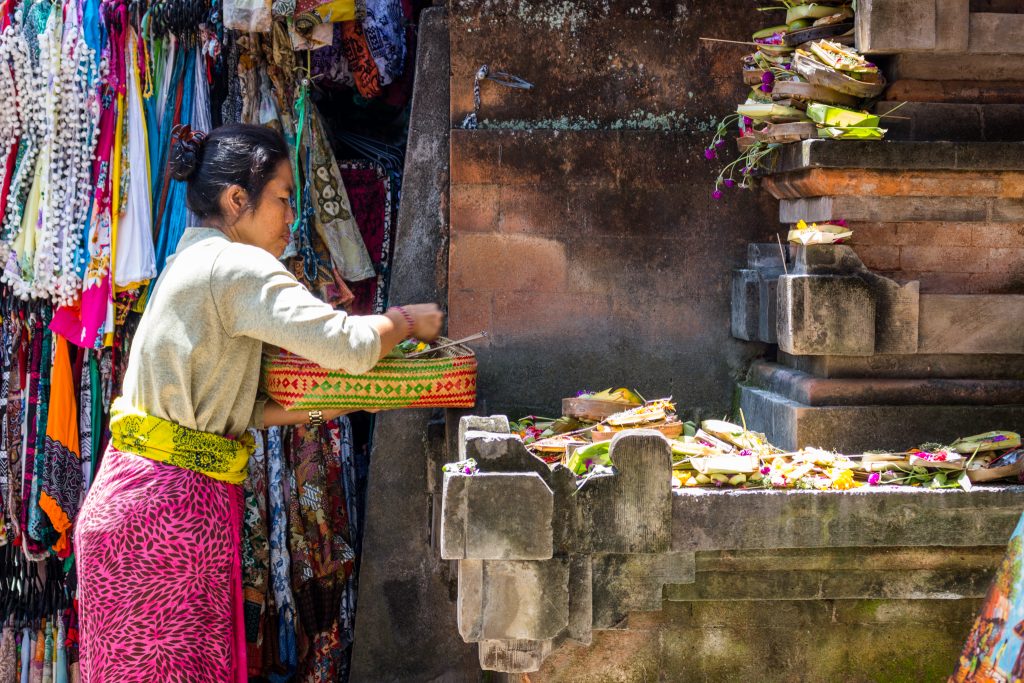 Canang sari placed on the floor are to protect and show gratitude for the animals while those placed at the chest addresssymbolize mankind. Offerings set overhead are devoted solely to the gods. In the spirit homes, where ancestor’s spirits reside, canang sari might include a few of the ancestors’ favorite treats.

By midday, most of the once-pristine canang sari offerings have been destroyed by nature’s elements or scavenged by local animals. No matter, the intention of the offering has already transcended to the gods. In just a few short hours, they will be swept up and replaced with fresh ones.

The heart of the offering lies in the fact that it’s done selflessly and diligently, making it an inherently generous act. If a canang sari cannot be created, they are purchased for around $1 each. Canang sari ranges from elaborate weavings to simple palm leaves folded with a few grains or rice inside.

What’s inside a canang sari? Though there are hundreds of variations, often changing in times of ceremony or celebration, every single item and the way that it is arranged addresses a different Hindu god – primarily Brahma, Vishnu, and Shiva.

Even in towns that have been globalized thanks to the power of the tourist dollar, where signs are in English and men tout “Yes! Transport?” on every corner, the canang sari offerings are still prevalent. Careless tourists often accidentally step on the offerings, at times snuffing out the incense or scooting the box into a nearby gutter.

When I asked Putu, a Balinese taxi driver, if these cultural snafus offended him, he replied, “No.”

“I saw a man – a very drunk Australian – scream, “Why is there rubbish everywhere?!” He kicked the canang sari, and then he fell into a water drain just a few steps later.” Putu laughed. “I don’t worry about what others do. I only worry about my own karma.”

This tolerance of foreign misbehavior is not unique to Putu but belongs to the Balinese population as a whole, which reigns as the most-visited island in all of Indonesia — even trumping Java, the island that hosts Indonesia’s capital of Jakarta. Bali has held tightly to its individuality, maintaining around an eighty percent Hindu population in the midst of the world’s largest Islamic country. This specific Bali individuality is what keeps visitors hailing from all over the globe.

Travelers come not only admire the island’s natural features of jungles, volcanoes, and pristine beaches, but often as part a spiritual pilgrimage as well. Remember Eat Pray Love, the cult classic of lululemons everywhere?

In my home state of California, being busy is often wielded as a status symbol and we are known to rush in the mornings, complain about our long commutes, work through our lunch hour, and disconnect from our environment via television or the internet as soon as we get home. We cross heavily trafficked roads with our necks craned down, eyes glued to a screen. And though California is not completely representative of Western life or the USA as a whole, the EPA cites that Americans spend on average 93% of their time indoors.

Contrast this to the multiple times a day that The Balinese Hindus check in with their environment, with the gods, and with themselves. They invest time and financial resources to mindfully create an arrangement that will be destroyed just a few hours after they create it – solely for spiritual reasons. They feel the softness of petals between their fingertips, smell the burning of incense, and devote their time no matter how many things could excuse them from doing so. They acknowledge the potential for catastrophe in a busy intersection, churning ocean, and behind the wheel of a vehicle.

They are generous to a world that I largely ignore.

On this past trip to Bali, I went on a road trip around the island with my sister, an Australian friend, and a Balinese friend. 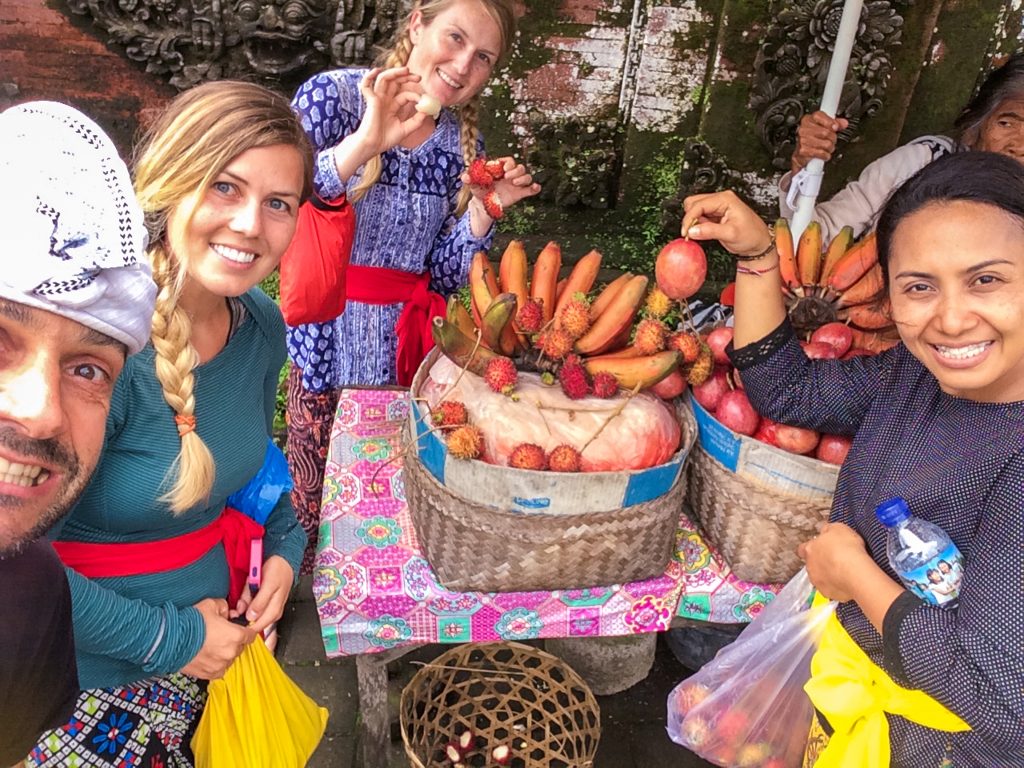 My Balinese friend often sensed the presence of gods. If the spirits were evil at any of our destinations, we’d move on — forfeiting our hotel reservations. Whenever she could, my friend placed a canang sari of her own. Because of her, I was able to get a closer insight into what daily life as a Balinese Hindu was like.

My friend wanted to reach the top of Lempuyang Temple, past the stage where many tourists stop for a photo. We would climb 1720 steps and stop at six smaller temples as prayer points along the way. My friend asked if my sister and I would wear her temple clothes and wondered if we wanted to join her in the Hindu rituals. 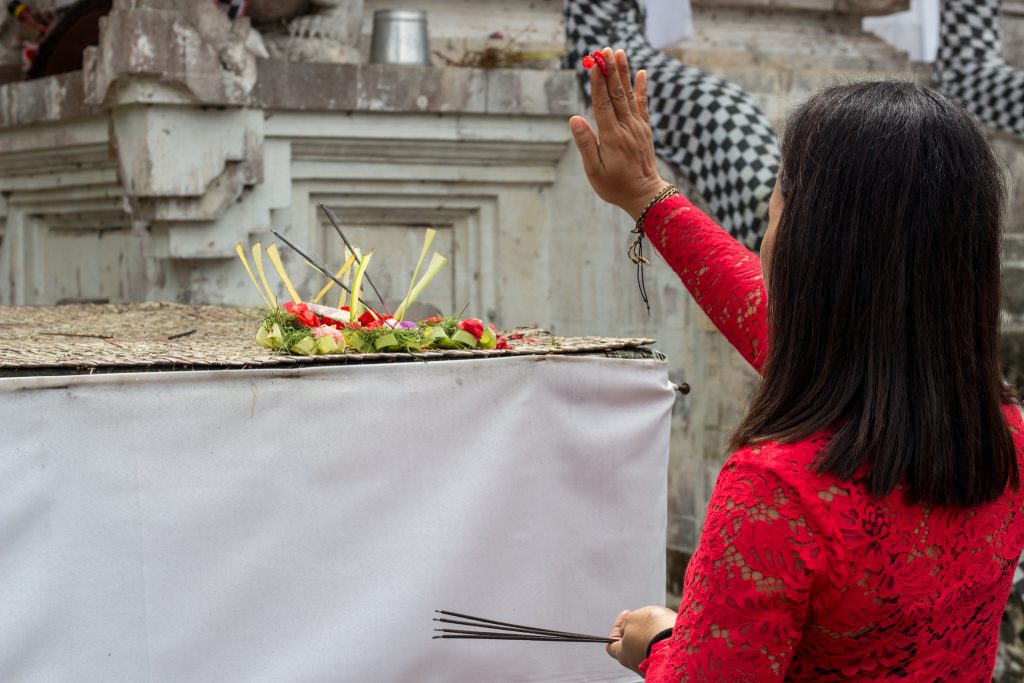 I slipped the lace top over my head and my friend tied a sash around my waist. The material looked like stiff but everything felt comfortable and stretchy.

I am always weary of crossing the line of cultural appreciation to appropriation. I keep most pictures of myself participating in cultural ceremonies tucked away in a folder on my laptop, afraid that an overzealous liberal will turn it into a meme or pull it out of context.

And I fear this despite being a proud feminist and bleeding-heart liberal!

We joined her. It’s more damaging to travel blindly and demand that the culture you visit morph itself to cater to your ideal way of living. I wanted to experience walking through Lempuyang Temple, and the only respectful way to do so was by adapting.

We drove to Lempuyang Temple and made our way up to the temple’s most famous site, commonly called The Gate of Heaven. 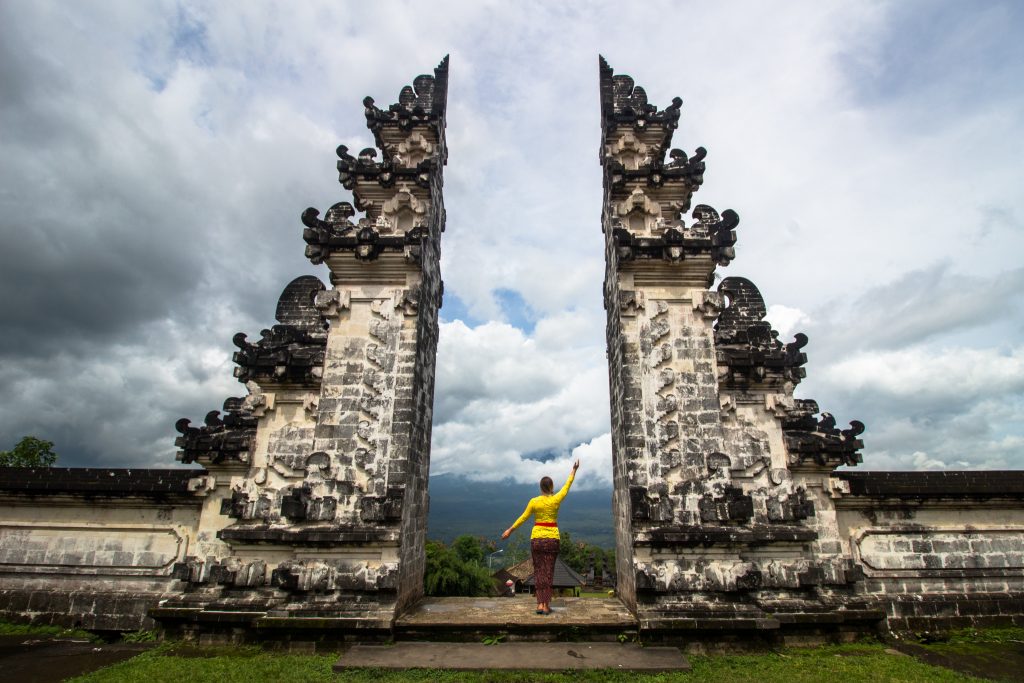 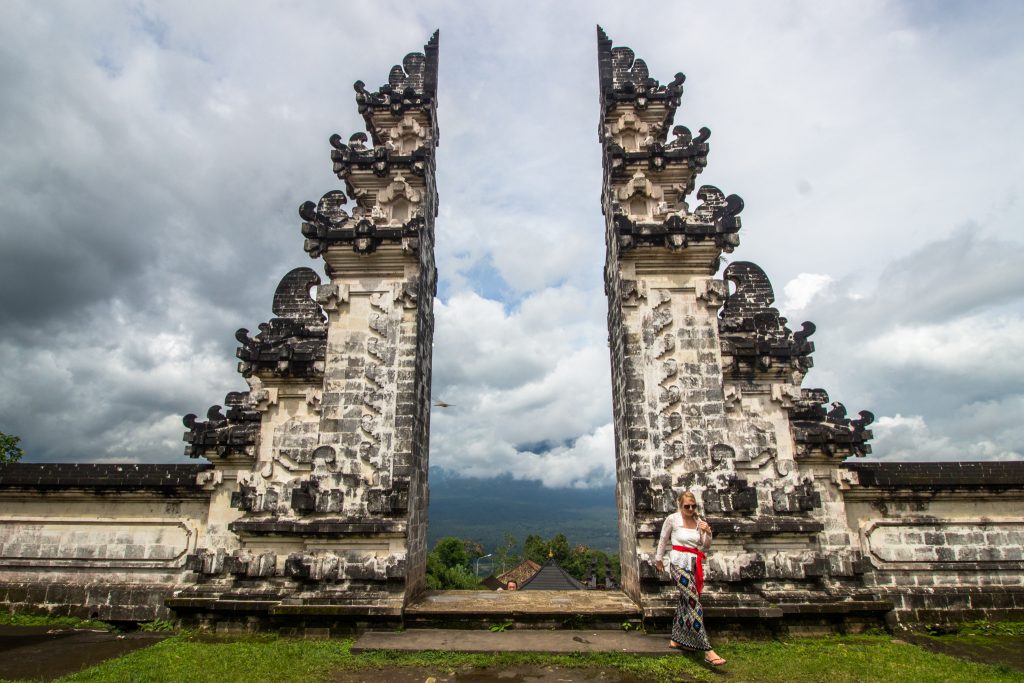 I’d seen the gate in pictures, but nothing could come close to conveying how beautiful it was in reality. I understood why Bali believes that it’s an island that belongs to gods. If beauty and goodness has a counterweight, no wonder there are so many demons. 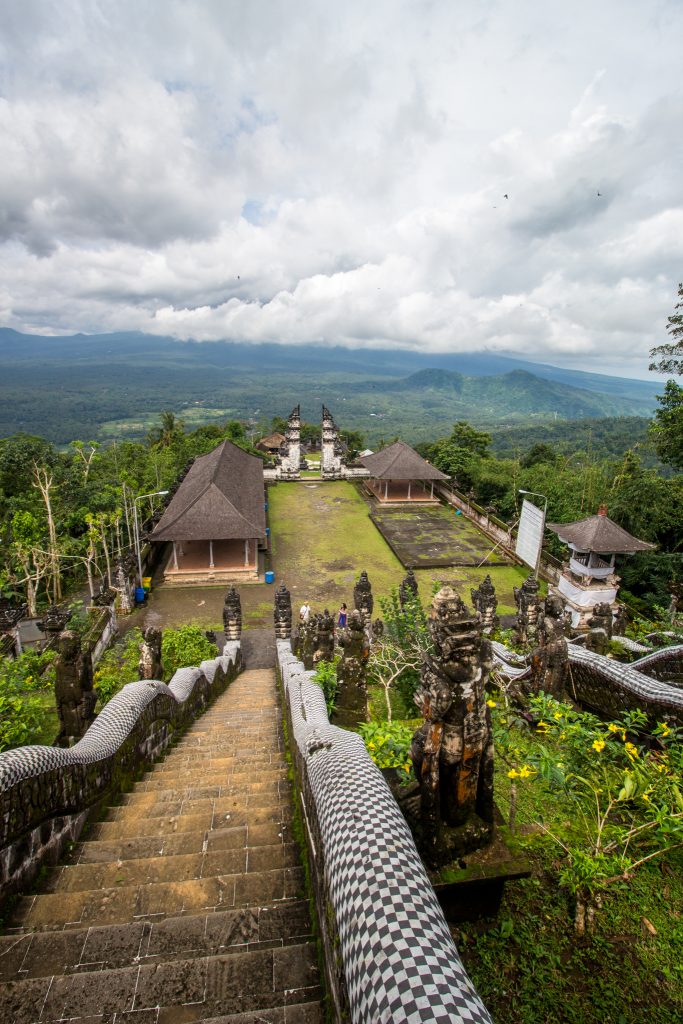 One of the worst traits is my inability to sit quietly in the moment. My mind is always racing and needs to be reined in. Even the mere thought of sitting somewhere without my phone, notepad, or book to entertain me is an agonizing one.

My Balinese friend, on the other hand, moved with a calmness and sensitivity that only present minds can control.

We stopped at the first temple and took off our shoes, placing them as pads for our knees. We kneeled and held out our palms, forming a small cup. The pemangku, temple priest, sprinkled floral-scented water into our hands and onto our heads as he recited his chant. We sipped the water and bowed our heads. 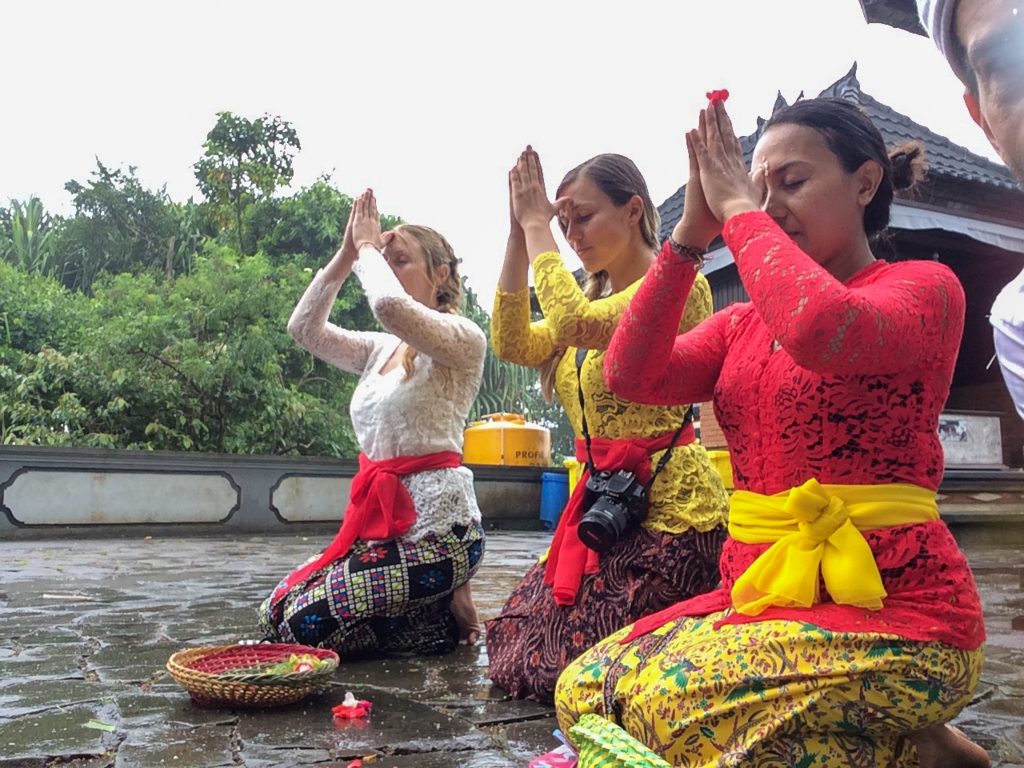 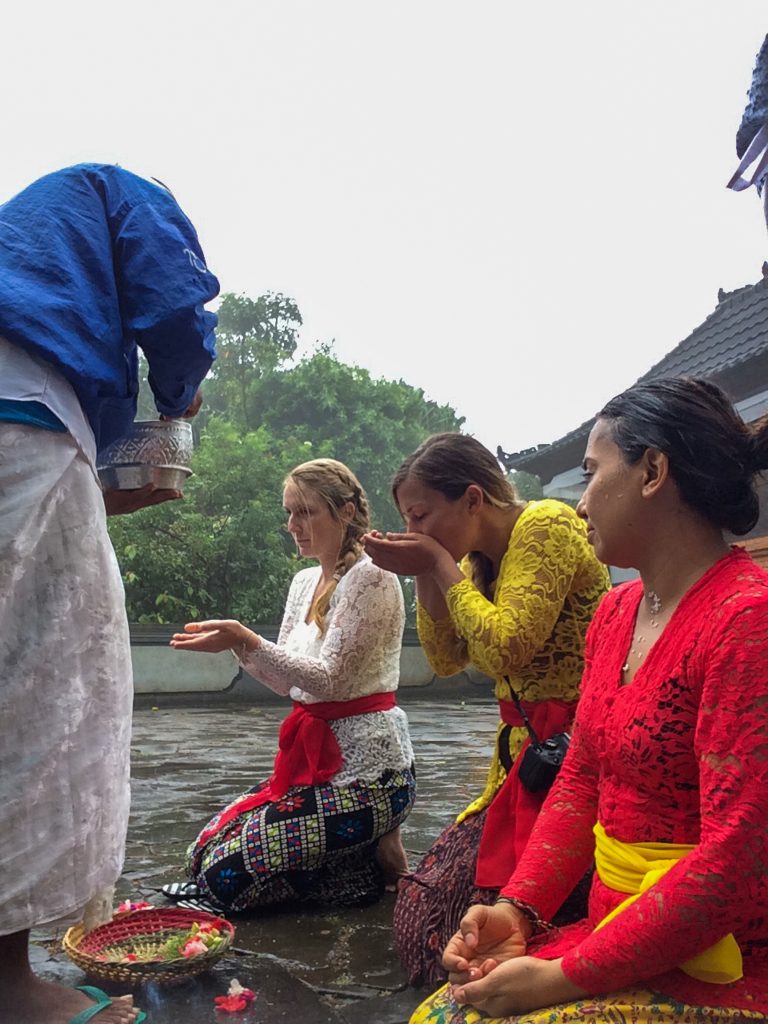 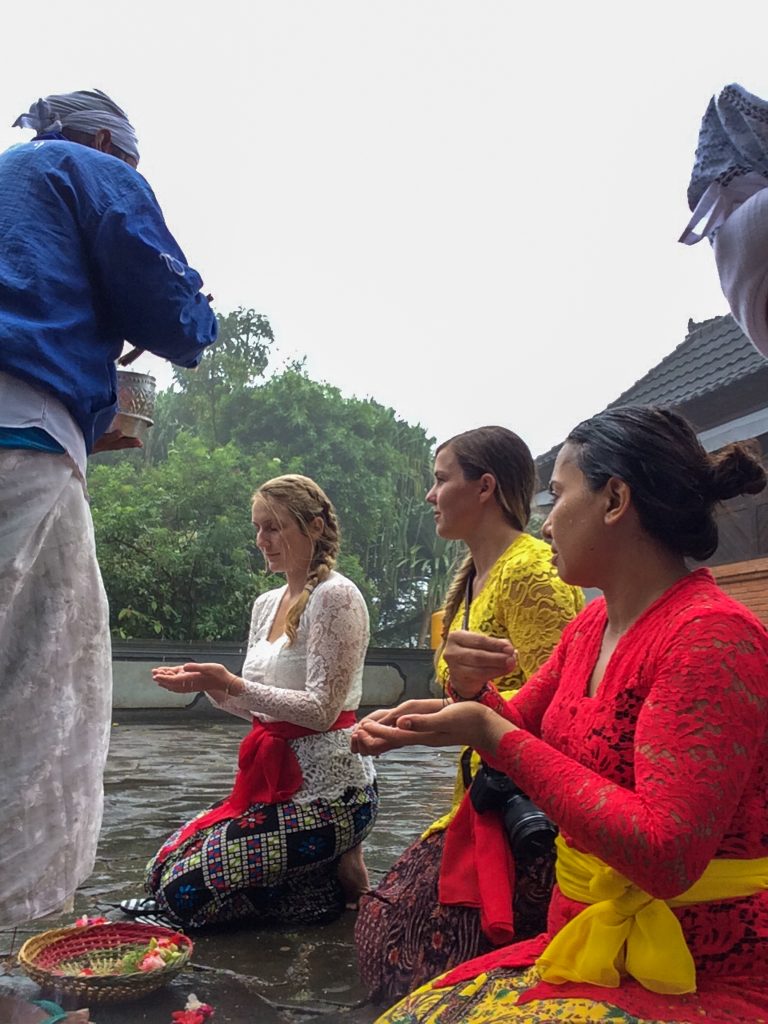 After a few minutes of kneeling, I started to feel anxious and wanted to move towards the next temple. My mind was already at the top. What would we do next? What time would we get there? I wanted to shift my bodyweight. My toes were sore.

My friend kept her eyes closed and her body still.

We walked up the steep steps to the next few temples and kneeled for the rituals again. At one point along the way, we came across an elderly woman with a large bulge protruding from her neck. My sister and friend, both being nurses, speculated that the woman had goiter, a result of an iodine deficiency. My friend got the woman’s contact information before walking on. Later in that day, my friend returned to the woman with medication.

Rain clouds rolled above us and it poured. We found shelter near a temple with hundreds of old canang saris tossed over the side of the hill like discarded prayers. I looked at them and wondered if Balinese Hindus ever felt like they wasted their time creating something so beautiful, only to not have it exist in a few hours. Every piece of art that I create is for myself, and lives online or in a notebook for all eternity.

We warmed ourselves with a cup of coffee and watched the rain fall. It was too dangerous to walk the moss-covered stairs either up or down the mountain, so we sat and waited for the storm to die down.

I felt present. I didn’t have an option of moving on to the next thing — mentally or physically. Sheets of rain barricaded me into a moment of time where I got to sit with two friends and my little sister. 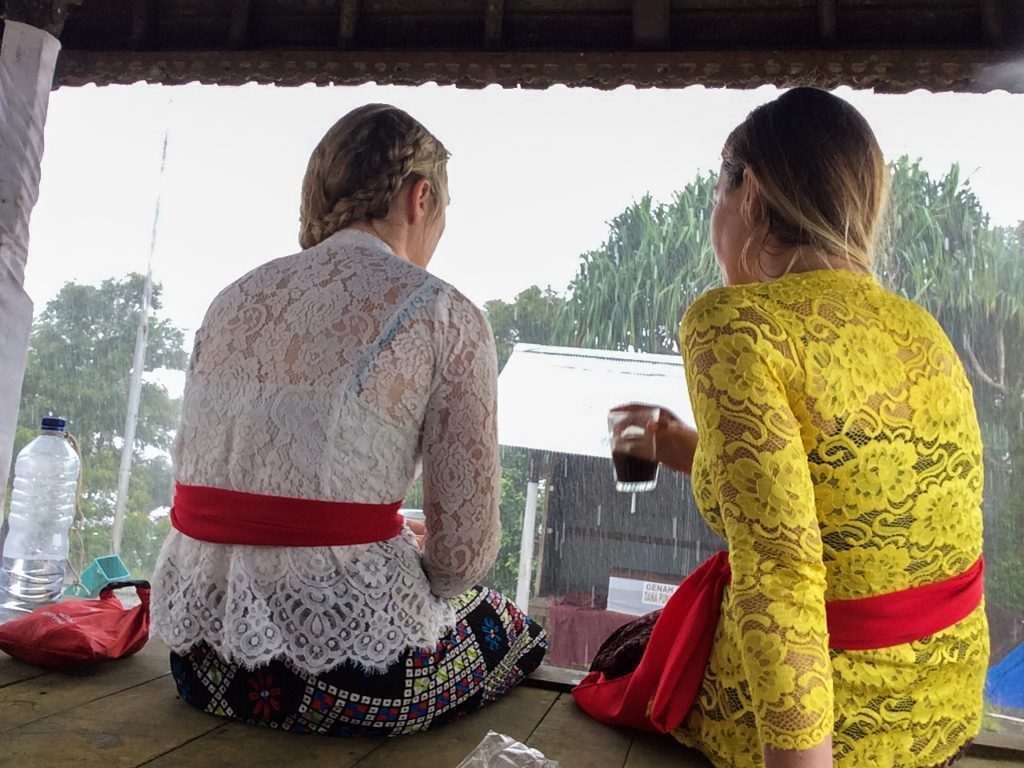 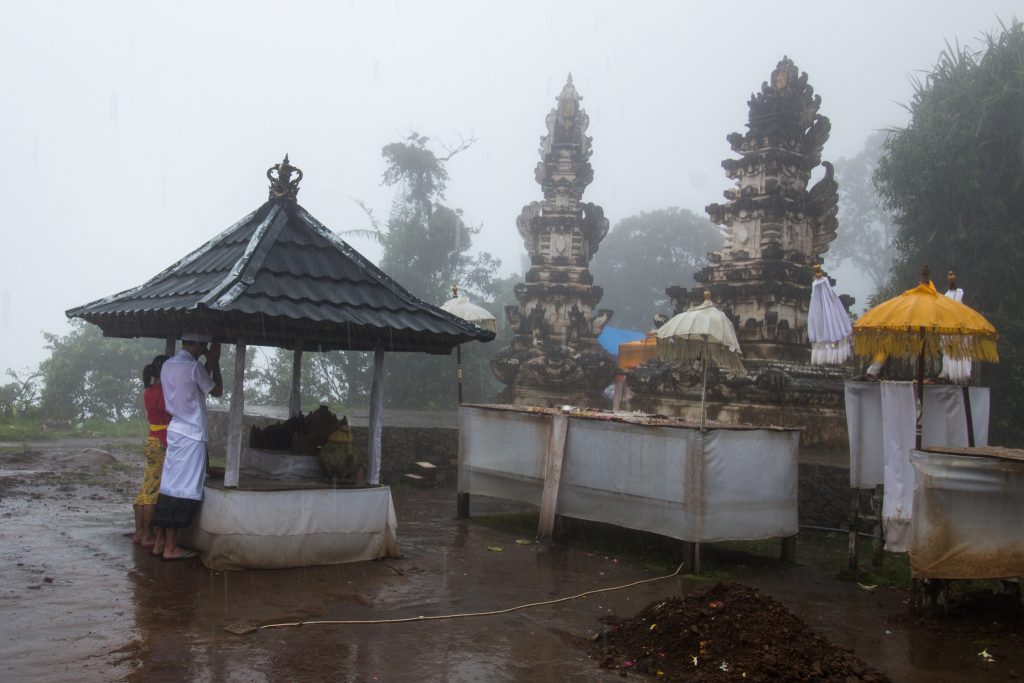 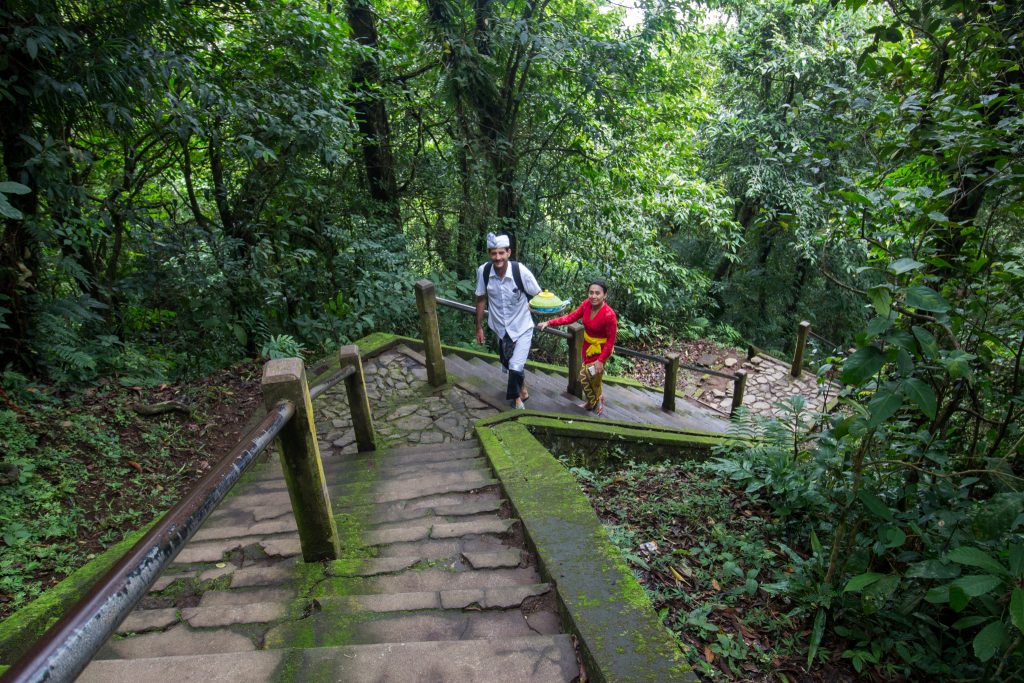 When it cleared, we finished our journey to the top of Lempuyang Temple. Two men sat behind a rifle placed on top of a table.

“It’s for the monkeys,” my Balinese friend explained.

I looked upwards to the treetops for any sign of monkeys. They hid from the rain. Chickens scampered around the perimeter. 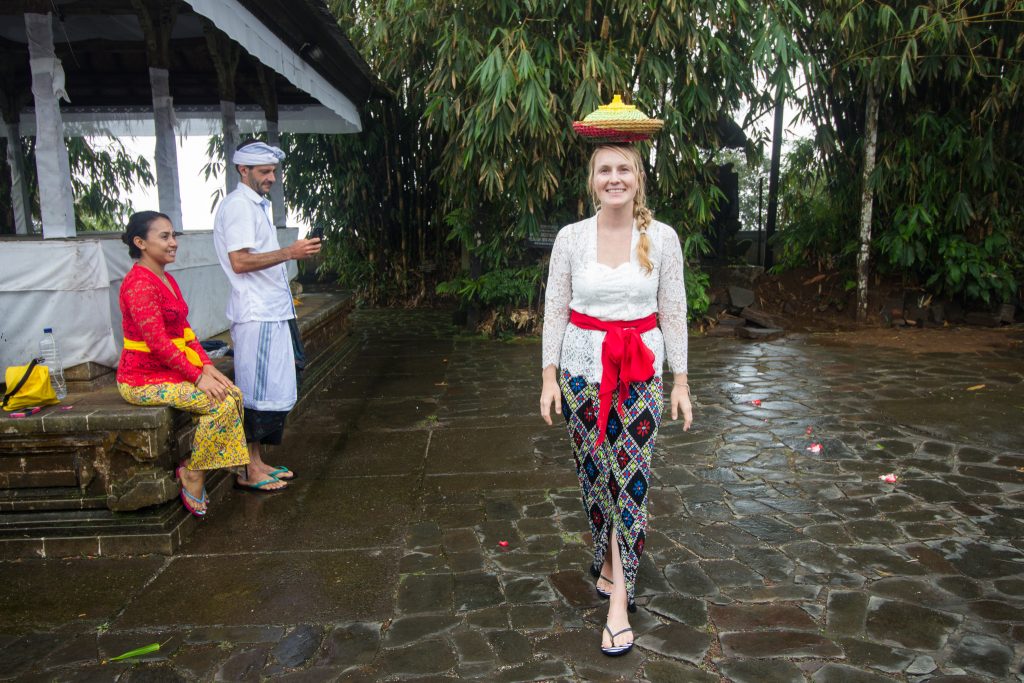 My friends took some time praying at the top of the mountain. Their knees and ankles never seemed to get sore. I joined them for a moment and then walked around. I looked out onto the horizon. After they finished praying, we laughed about the chaotic weather. 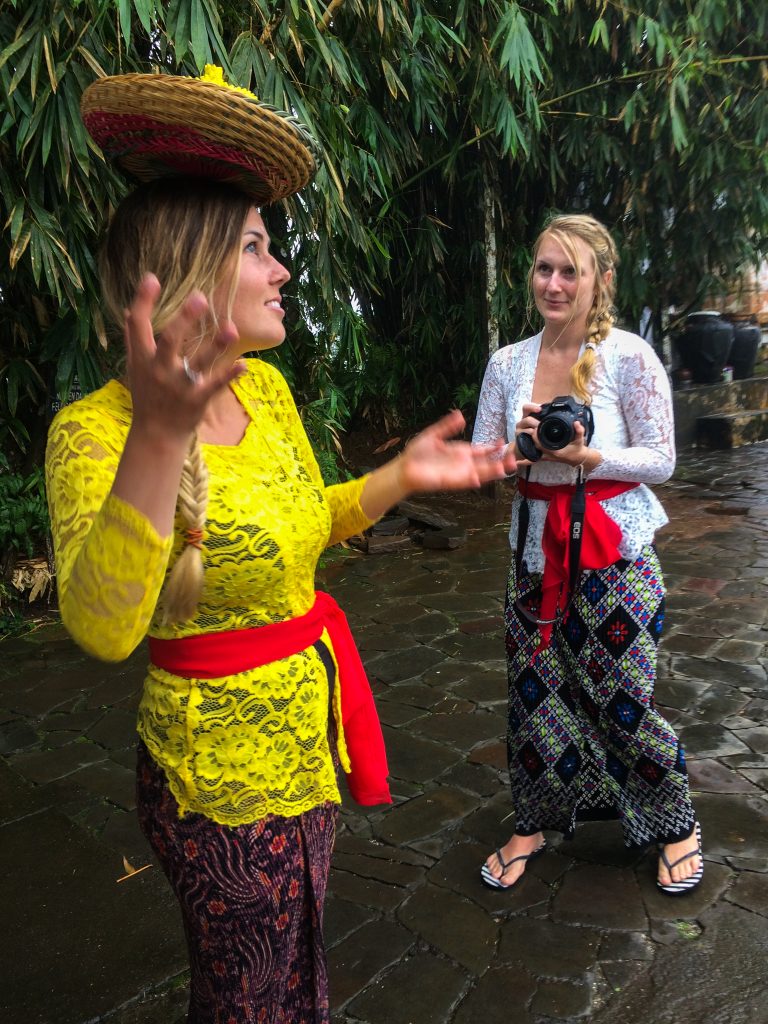 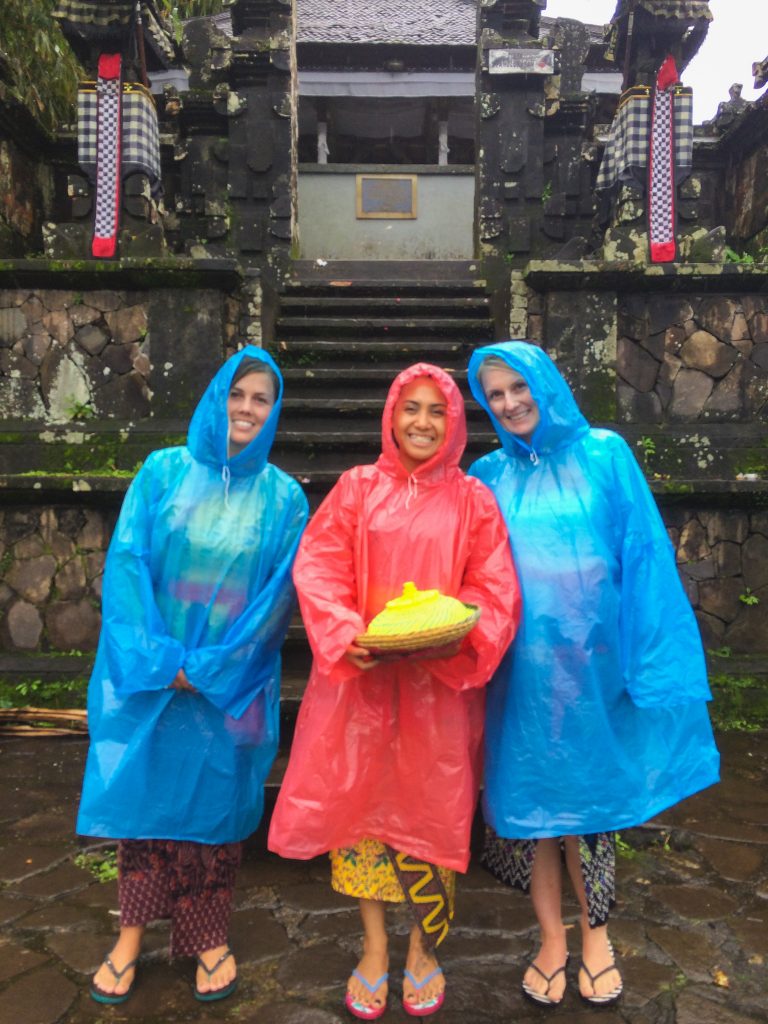 For many, climbing the 1720 stairs to the top of Lempuyang Temple is what makes the experience a difficult and spiritual one.

For me, the challenge comes during the stillness in between steps. 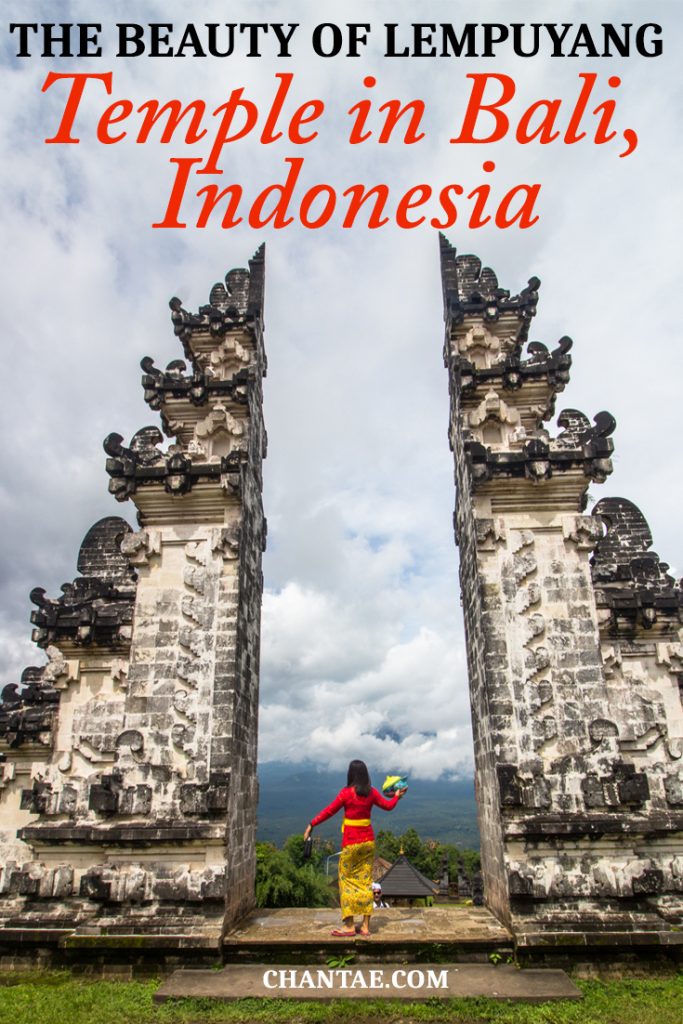 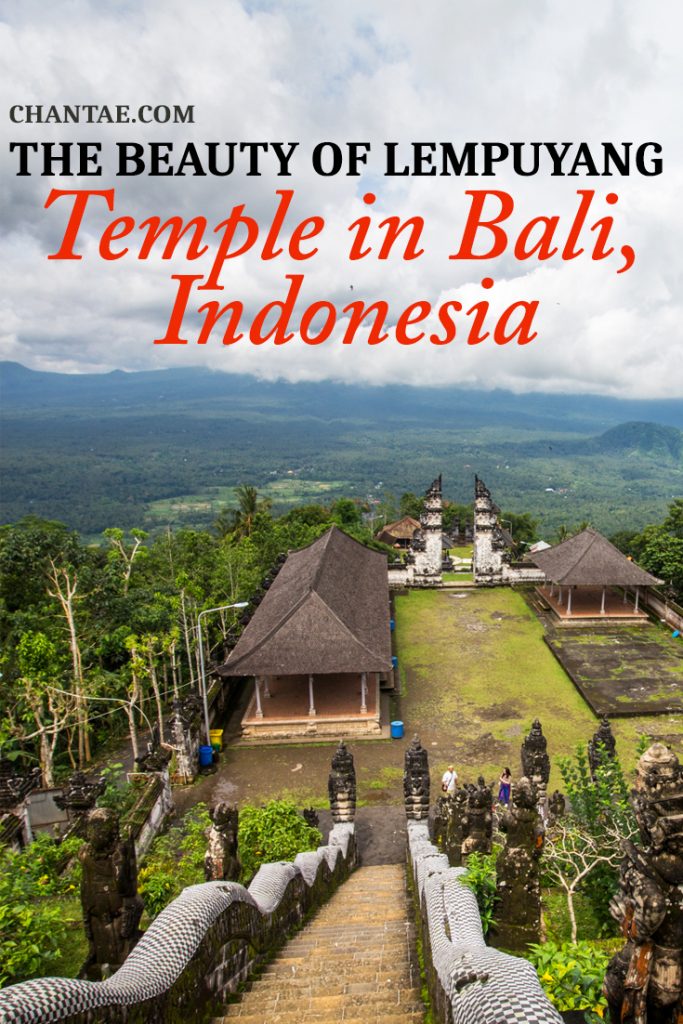