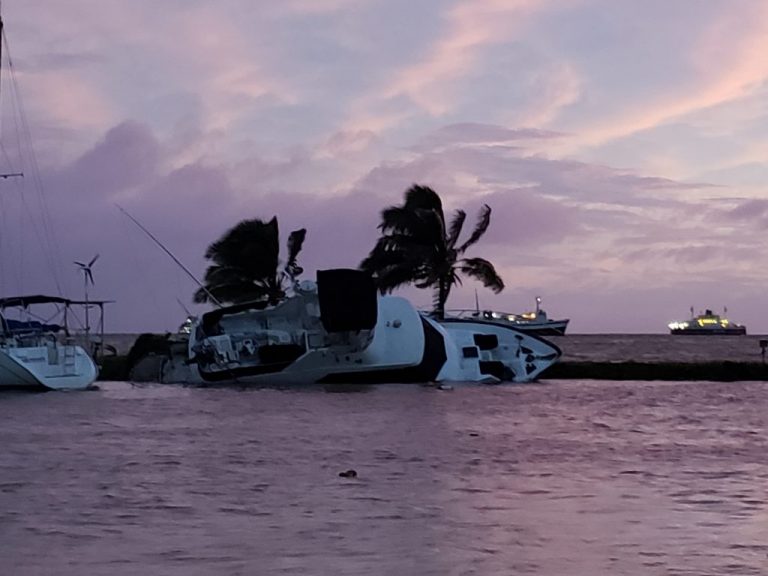 It’s been a wild few weeks as the world navigates this global pandemic. The lockdown in Fiji coincides with cyclone season in the South Pacific. These cyclones have potential to cause mass devastation as they topple homes, uproot trees, cause power and water shortages, and lead to the loss of life. In 2016, Cyclone Winston caused nation-wide damage that killed tens of people and destroyed thousands of homes. Because of a cyclone’s unpredictable nature, waiting for one to make landfall creates an air of anxiousness in the days leading up to its arrival.

One of the reasons I am staying in Fiji during the pandemic rather than repatriating to the United States is largely because of the South Pacific’s milieu of resilience. The South Pacific frequently deals with natural disasters that lead to power and water outages, supply chain disruptions, and health impacts.

During the days leading up to Cyclone Harold’s arrival, mask-wearing citizens went to the shops to stock up on food and supplies. Attempts of varying success were made to stay clear of one another while choosing the ripest avocado. Shops stacked candles, matches, flashlights, in between chocolate eggs and hand sanitizer. Each pile standing as an all-in-one reminder of the pandemic, impending cyclone, and Easter.

I grabbed two extra boxes of candlesticks and some peanut M&Ms for good measure.

The lockdown added new challenges to an already hard-to-navigate lockdown situation. Boat-owning members of the Royal Suva Yacht Club rushed to move their vessels to calmer waters. Some owners opted to dock their boat in Lami, the town next to Suva, and were escorted by police due to the ‘no one in, no one out’ policy in place. We opted to pull our boat out of the harbor until the storm blew over. Boat owners banded together to help each other lift move boats to safe spaces–a challenge that would be impossible without the community found even in the nation’s largest city.

Losing power and water can happen any day in Fiji, not just during cyclone season. The week leading up to Cyclone Harold, we’d lost water for a few days. Any reminder from the government or media to wash our hands was met with comments pointing out that many parts of the city don’t have water. However, come Cyclone Harold, I was proud of the new system we’d put in place to handle the shortage. We kept a bucket with rainwater for dishwashing, glass bottles filled with boiled tap water on standby for drinking, and a few jugs that we refill from the pool to flush the toilet. Need to shower? Hop in the pool. Jars and bottles of tap water placed by the sinks help with hand washing. Backup drinking water is kept to the side should this system fall apart.

For power, an assortment of headlamps, candles, and flashlights make for a romantic ambiance. Power banks, camera batteries, phones, and laptops are on a steady rotation of charging whenever the power is on. As for the fridge, we simply cross our fingers and hope that power comes back before it goes warm.

While medical workers, grocery store staff, farmers, and the police force prove to be the outwardly obvious champions of the pandemic, it’s worth giving a symbolic high five to the workers who have to work around storms and lockdowns to keep our utilities on.

I woke up to the thud of rain around 6 a.m. Rather than their pom-pom puff, the palm trees had their palms blown back, looking like dogs with their head out of the car window.

I went to make tea while we still had power and was shocked to see that it’d already gone out. By mid-morning, the wind had picked to around 50 knots. Broken palm fronds and branches littered the empty streets and dangled from power lines. The wind blew off our screen door and put too much tension on our front gate, causing the lock to snap off. We secured it shut with a spare rope.

In between looking out the window, I worked as normal, waiting for the storm to blow over. In the aftermath, our neighborhood in Suva seemed to be spared of major damage while other regions in its path weren’t as fortunate. Cyclone Harold left a bright sunset in its wake as if to say sorry.

Cyclone Harold was declared a national disaster after it destroyed structures and livestock in multiple regions throughout the country. The tropical cyclone has killed 30 people and damaged thousands of homes across Vanuatu, Solomon Islands, Tonga, and Fiji.

On Kadavu, an island south of Suva, a Emma from Not Lost in Fiji writes after the cyclone, “I can look both directions out of this doorway and see people’s roofs scattered on the floor, a detached and dented water tank floating in the river and piles of splintered wood and rubble where people’s homes, that once stood strong and were full of memories, have been totally destroyed.”

Amidst piles of metal and wood, Emma says, “Not once did I see a tear shed for the fallen houses. Not once did I see people giving up or in despair. The strong, resilient, brave and wonderful people of Nakasaleka were still smiling and laughing. As we walked around the village, children were jumping into the gushing river, being swooped down in the surging water and then grabbing the branch of a fallen tree, clambering out and doing it again. Families sat together chatting, waving at us and inviting us in for tea. I walked past one man, and he said ‘Bula Emma, how’s the weather?’ followed by a hearty chuckle and he wandered off. The sky cleared and became a beautiful collage of darkening blue and pink clouds as the sun began to set.”

Last year, my friends and I went on a boat trip to Matuku, a remote island in Fiji’s Lau Group. After presenting a bundle of kava to the village leader, locals welcomed us with fresh coconuts and told us to ‘enjoy the island as if it was our own.’ Each morning, a small fishing boat would come to our boat and take us surfing and freediving. The drivers veered around the bend as we wondered aloud about what existed just beyond the next corner of the island.

While freediving, we dodged reef sharks and admired sea turtles, rays, reef fish, and corals from behind our masks.

Those living on the island are self-sufficient, growing their own crops and fishing each day along their barrier reef. An island without reliable internet or phone signal, a boat carrying essential goods comes once or twice per month. One local told me nonchalantly, “Sometimes, the boat doesn’t arrive.”

Such an emotional morning for my extended family to learn of our family home destroyed by TC Harold in Makadru, Matuku. So much memories gone. pic.twitter.com/wRVxUMJYMX

Cyclone Harold destroyed the island’s farms, shop, and many of its main structures. Village headman Maikeli Lesikilakeba told the Fiji Sun that their farms were destroyed, adding, “We were not able to save anything except the clothes on our back.”

Part of the roof came off the community hall (image above) post-cyclone in the photo below.

In attempt to slow the spread of the virus, Fiji banned inter-island travel a few weeks ago. While this was a wise move to protect the outer islands from contamination, it has made getting aid supplies to the islands a challenge.

And Fiji is not alone when it comes to struggles in receiving aid. The Guardian reports that relief for Vanuatu has been delayed due to fears of coronavirus contamination. All packages must be disinfected and quarantined for three days before opening. In Tonga, they have started rebuilding roads, wharves, and other parts of the country in dire need of repair.

So what now? We don’t know when the all-encompassing this will end. So while Fiji rebuilds in between storms, there is little to do but self isolate and add discounted chocolate Easter eggs to the resupply shopping list.