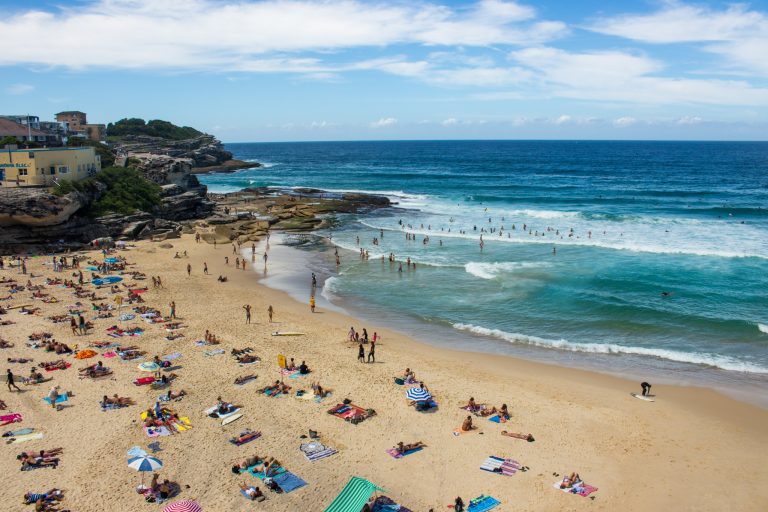 The Coogee to Bondi Coastal Walk: The Things I Couldn’t Put In a Guidebook.

Two boys stood at the edge of the reef as Mo and I watched the swell lines roll in. The only barrier between the boys’ skin and the razor sharp reef was a pair of thin, lycra board shorts.

A small wave crashed on top of them. They braced themselves. I winced.

A bigger one came. Boom. The boys slid on the reef like a block of cheese over a cheese grater. One of them fist pumped as he was dragged over the ledge. His friend scrambled to safety for a brief moment to shake the water out of his ears, then scampered back to the edge again.

This beach is notorious for having one of New South Wales’ highest drown and rescue rates. The Coogee to Bondi Coastal Walk

Here’s the obligatory brochure style spiel: The Coogee to Bondi Coastal Walk weaves you through a handful of beaches, each one maintaining a unique vibe about it. Some are crowded, others are rugged, a few are calm, and almost all offer prime people-watching. It’s definitely one of the best things to do in Sydney. You’ll need to budget at least four hours for the 6kms if you want to stop for a swim, dive, surf, or lounge session.

If you want to read a practical guide on this walk, go to Lonely Planet.

If you want to read about the basics and see pretty pictures, go to the Tourism Board site.

If you want to hear about the weird things you could experience on the Coogee to Bondi walk, continue. Mo and I started our micro-adventure at Coogee Beach, one of trendiest beaches in Sydney. It’s one of those beaches that’s often described with a hair twirl as being touristy, but not too touristy. Crowded, but not too crowded. Boutique, but not like, overdone or anything. Chia seeds. Acai bowls. Conscious uncoupling. The main street is filled with cafes, restaurants, and shops that almost all can qualify as above average. On the sand, you’ll likely hear the accents of foreigners over the mumbling of an Aussie.

Coogee Beach hosts two ocean baths. The last remaining women and children only bath, McIvers Baths can be found on the north side while the free-for-all is at Wylie’s Baths, south of the beach. McIvers Baths, being an exception to Australia’s Anti-Discrimination act, has had a dash of controversy over the past few years, including erecting a fence to keep out the “perverts and peek-a-boos” and council members left scratching their heads on where to draw the line on people arriving to bathe mid sex-change. Nonetheless, both spots are perfect for throwing down a towel and relaxing the day away. Giving off a much more rugged feel, Gordon’s Bay, the next beach south, is home to wooden boats, snorkeling, and the presides as the city’s watering hole when it comes to looking for a mate. Forget Tinder, ye singletons of Sydney, Gordon’s Bay is where you’ll find the one for the day, the night, for life, whatever. Though Mo and I rushed past it on my first Coogee to Bondi walk, I made a point to come back by myself to snorkel the next day. Upon my return, every rock was covered in pairs of people sans tanlines embracing. I looked for a sign and wondered 1) how white people can get so seamlessly orange and 2. if this was one of those beaches I’d thought only existed in Europe. Approximately thirty couples laid between the rock I stood on and the one I wanted to go to. I waddled through the oiled bodies with my snorkel, wetsuit, and fins murmuring “excuse me, pardon me”s. I stomped in a puddle, splashing stagnant water over the legs of one man. The bloke didn’t even notice — too busy gazing at the body of his precious brood human. I winced and walked on until I found my spot.

Apparently the snorkeling here is incredible. However, I only spotted murky patches of seaweed, a few brown fish, and the bottom half of couples splashing and kissing in the water. Afraid of looking like a pervert or peek-a-boo, I fled the scene. One of my favorite – if not the absolute favorite – sights along the way was Waverley Cemetary, rarely mentioned in other write-ups about the Coogee to Bondi walk. Beautiful yet macabre, the cemetery forces you to acknowledge death on a walk featuring views so perfect, death is likely the furthest thing from mind. The bodies of hundreds of people lay in graves of varying sizes and states. Some sites have monuments of angels shining over them while others are dilapidated by salty air and neglect. Bushes of pink flowers marked boundaries.

The location is to die for. “I want my body donated or sprinkled into the ocean when I go.” I mused to Mo as I pictured my bones inside one of the crumbling graves, briefly wondering whether being 5’1″ would save me a few bucks by being buried in a kids plot. At best, I’d be a burden for future generations to take care of. At worst, I’d be forgotten about like so many resting here already.

“Yeah, just like, chuck me off a cliff or something if nobody wants my guts.” I confirmed. With our daily existential thought out of the way, we walked north past Bronte Beach and Tamarama. As we rounded Mackenzie’s Bay, I raised my camera, steadying it to take the postcard-worthy shot. Then, a pair of glowing buttocks entered the left-hand corner of the frame. A young woman, after taking a look around at the hundreds of people surrounding her, decided to pull off her bikini bottoms and spontaneously create a loo with a view.

I put my camera down and waved my hands, “That girl is ruining my shot!” Doesn’t she know that just a few kilometers away, fences were erected to keep unsavory fellows from peek-a-booing at girls like her?! Yet here she is, offering it all on a pupu platter.

“WE CAN SEE YOU!” I yelled into the air.

“WE CAN SEE YOU!” Mo repeated.

Why not wade waist deep into the ocean like all the others at the beach? I don’t know. This girl’s mind — and the whiteness of her hiney — defied logic. On a positive note, this debacle convinced me that there are in fact tan-lined people around — true Sydney anomalies. Australia’s most famous beach thanks to the T.V. series, Bondi Rescue, was our final stop on the Coogee to Bondi walk. Tourists and locals alike carpeted the sand with colorful umbrellas and terry-cloth towels, rotating from shore to sea when the sun got too hot. In the market to buy a new longboard, Mo asked the bus driver if surfboards were allowed on board.

“As long as it fits.” The driver shrugged. We walked into a surf shop where the owner had just sold two identical packages of surfboards, wetsuits, fins, leashes, and tail pads to two girls with sporting foreign accents. He turned his back and smirked at his pre-teen son with a look that said, “we got ’em!” Sold! An Australian lifestyle to the most naive bidder, at $900 a pop! One girl, looking uncertain, thumbed the neoprene of her wetsuit. I wondered if she’d tried it on.

Completely ignoring me, the shop owner targeted Mo with a great deal on two longboards that had to be out of the shop by the evening – else they’d be double the price tomorrow. The owner pulled out the smaller board and held it in the air like a trophy. I knew that creating a false sense of urgency is of the oldest tricks played used-car salesmen and surf shop owners alike, but still, daydreams of us using the riding the longboards on small, peeling waves urged me to buy the board.

The owner looked at his son and asked, “Sonny, how much did I say we needed to make tonight so that we can pay rent?”

The exact price of the boards.

We walked out of there knowing that the sales strategy was nothing but a scam, but couldn’t help feeling like we were missing the deal of a decade. Guidebooks tell you all about what you can expect to see on the Coogee to Bondi Walk and make no mistake, the text is completely accurate. Yes, shimmering seas, panoramic views, white sand coves, insert more brochure descriptions here, will definitely be there when you go on the walk yourself. However, the moments found in travel that are not guaranteed are what make each person’s journey so special. For me, those moments were learning strange facts about fences, seeing the backside of a young woman, thinking briefly about death, and nearly falling for the con of a surfboard salesmen. Every time that I log onto this site, I’m thankful for the fact that it’s not a guidebook.

What are the random moments that make up your travel experiences? (Feel free to share in the comments below.)