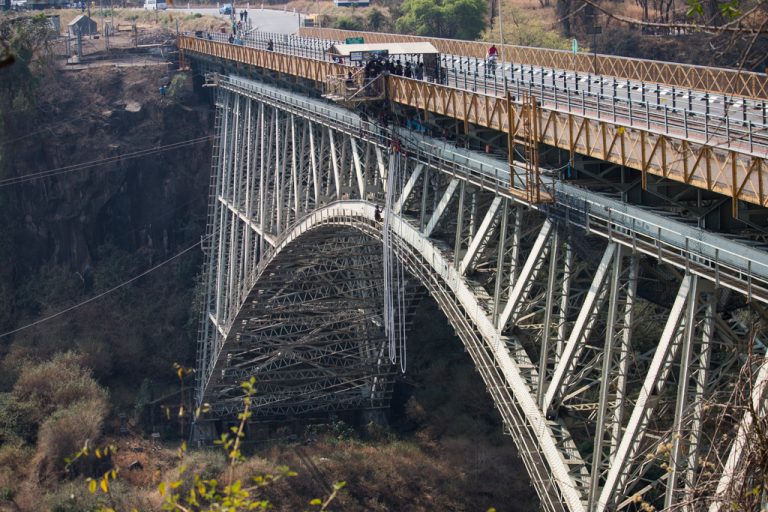 Bungee Jumping at Victoria Falls Bridge over the Zambezi River

I started doing every meditation trick I had up my sleeve. Deep breaths turned to hyperventilation. Thoughts of relaxation made me realize that corpses are the most relaxed people of all. Rationalization was trumped by the fact that it’s illogical to throw your body off bridges.

A group of tourists looked over the edge next to me.

“You know the rope has snapped before, don’t you?” I blurted.

Their eyes widened, “What? Really?” the two girls stammered, “Are you serious?”

The man in the group stood there and blinked.

In 2012, a 22-year-old Australian woman bungee jumped from Victoria Falls Bridge. It was rainy season, so the Zambezi River was flowing heavily along the crocodile-laden gorge. The rope snapped and 30-meters of rope tethered to her legs dragged behind her in the water. She barely missed the rocks and somehow managed to wriggle her way out of the bungee cable and swam to shore. Since she came from the Zambia side and popped up on the Zimbabwe side, there was a miscommunication on what hospital to take her to.

“Yeah,” I said. “It was like a pair of giant invisible scissors came and snipped the rope. She lived, though.”

The tourists stared at me for a solid five seconds before murmuring, “Maybe we won’t jump.”

Damn it. Me and my big mouth. Misery truly does love company, doesn’t it? I could’ve been the hero these travelers needed – the person who inspired them to conquer their fears! Make the big leap! Instead, I was like a bar’s floodlights that come on at 2:00 A.M., just when you’ve found a great dance partner and some rhythm.

Now, it was dry season and I’m not sure that there’d be enough water to cushion a fall from the bridge.

But, I also knew that Shearwater Bungee hosts tens to hundreds of jumps per day, all without incident. The odds are almost nonexistent that something would happen – especially as they have tightened up safety standards.

Though many of them said they would join me in my adventure, they bailed out one by one. Some of them opted for the zipline or the gorge swing – but I stayed committed to the 111-meter bungee jump from the Victoria Falls bridge, one of the top ten highest bungee jumps in the world. 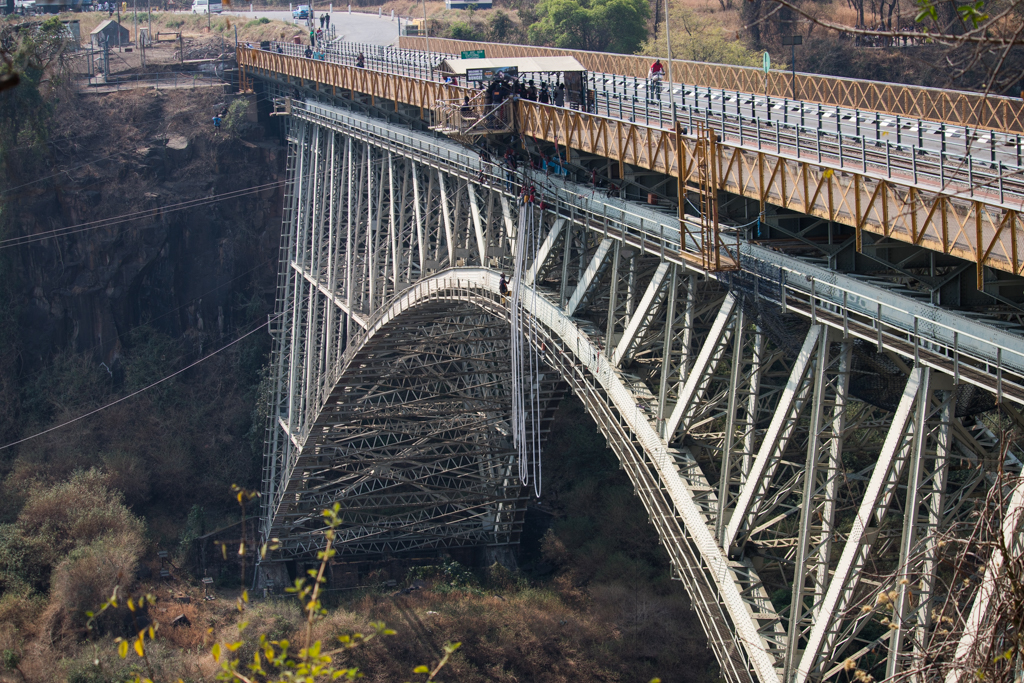 If I was going to die in no-man’s land, the canyon separating Zimbabwe from Zambia, I wanted to make sure I went out as a badass.

To get to the bungee jump site, we passed through immigration and walked for ten minutes along the bridge until we came to the jump site. I signed a waiver at a small station on the Zambia side of the bridge before being marked with a number and my weight. 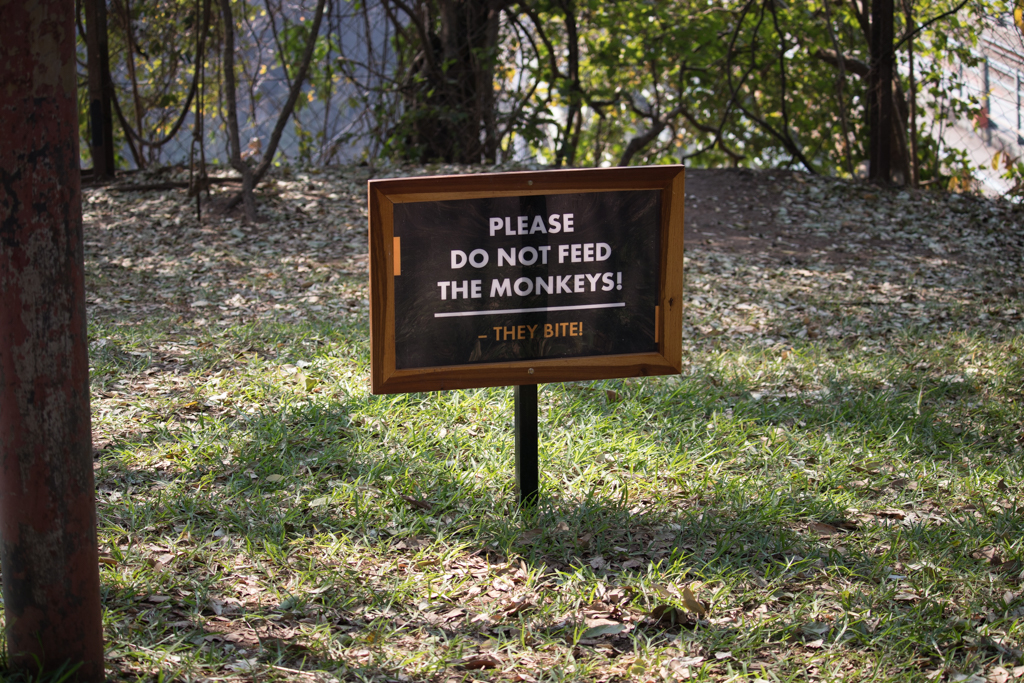 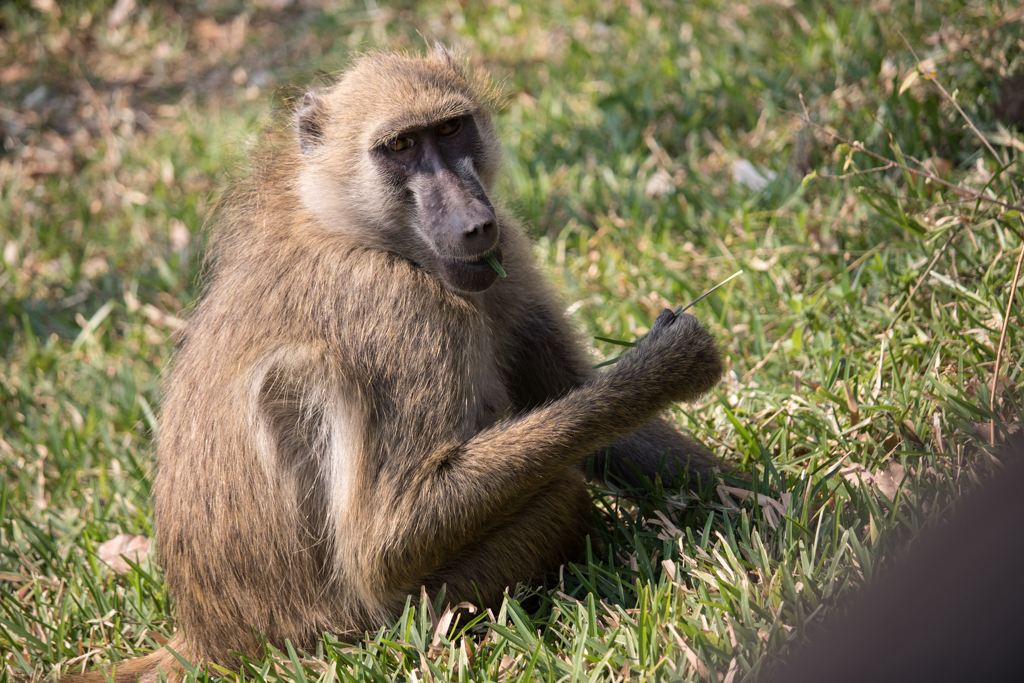 I wondered if I should take a picture of the waiver to send to my father for loopholes. My family is riddled – some might say infested — with attorneys. Would this contract be concrete? These are the same family members who text me before they board a flight with the words, “Love you! Sue ‘em for all they’re worth if the plane goes down! Talk soon.”

Unfortunately, no family members are well-versed in southern Africa law. And I could see that jumping in a literal border probably means there’s no one to enforce the law, anyways.

Then, I walked down to the jump zone. 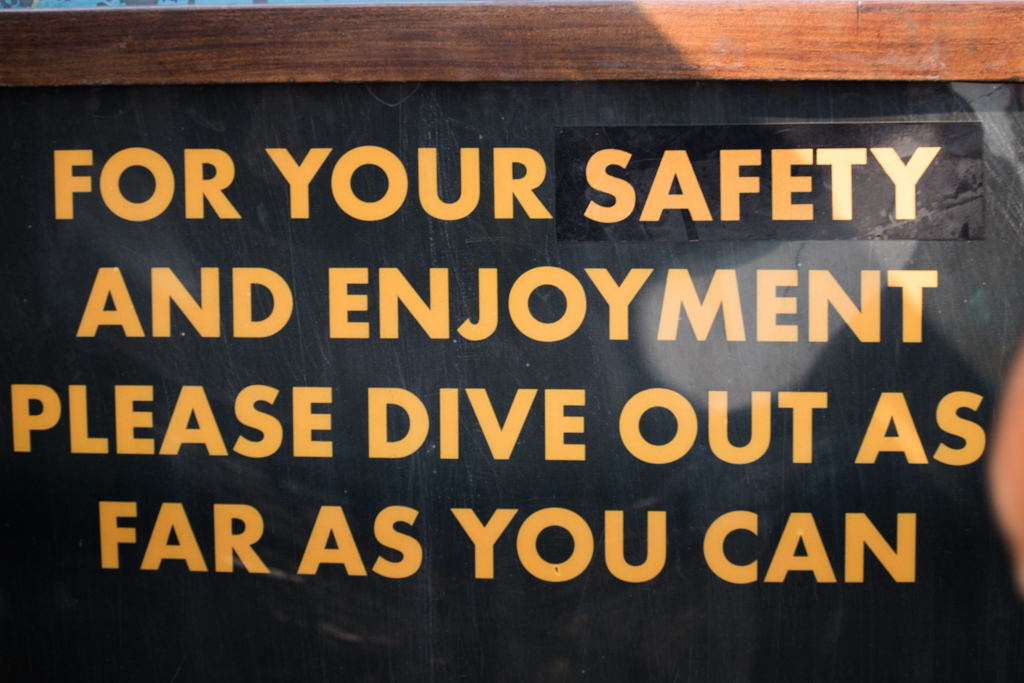 I’m not sure what I was expecting… but it wasn’t a simple, metal platform with a see-through metal grate. A crowd of people gathered and watched the jumpers.

They’re probably rubberneckers. I thought. They’re all waiting for some real action. They’d love it if I fell. They’d get to post on Facebook, ‘today we saw a REAL show!’

Paranoia manifests itself in many forms.

We walked back to the platform and a man helped me slip into my harness. Out of my entire group only one girl decided to jump with me – the tiniest and shyest girl in the bunch. She showed no signs of fear.

When she jumped, she didn’t let out a single peep.

I inched to the edge of the platform. My stomach churned, and I barked at the guy who started filming me. How could he have the audacity to smile at me at a time like this? I might as well have been suiting up for war.

I wondered if this would be the last day of my life. 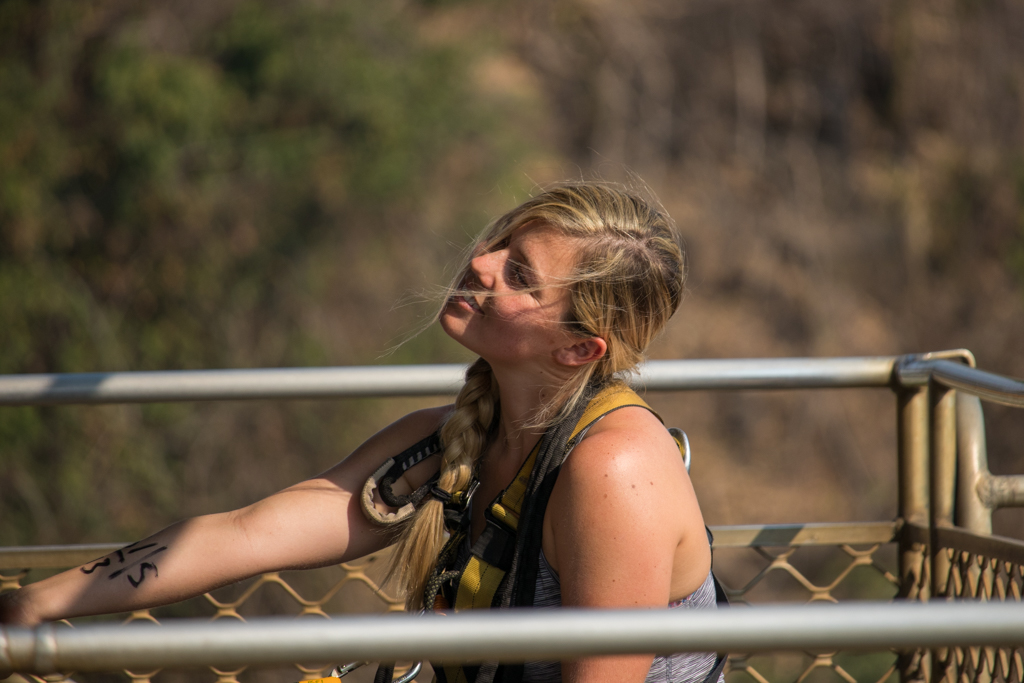 My mind recalled a scene from Fairly Odd Parents, where Timmy Turner is about to die. Cosmo says, “Hey, it’s okay. You had a good life, right?” 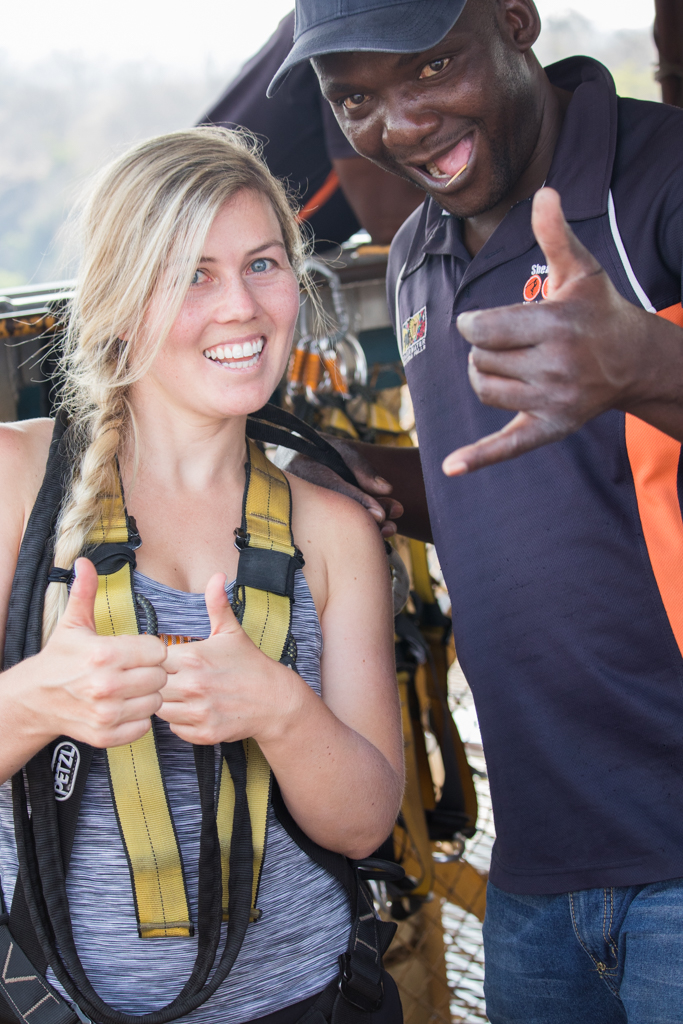 I consoled myself by remembering that in Biblical times, 26-years-old was probably quite old. I might have even been a grandma.

The workers wrapped my legs in two towels. Then, they tied a cord around the towels that attached to the bungee cord.

I mentally pushed past the history of the rope snapping and the fact that my life depended on an apparatus that appeared to be made with bundled up towels.

The sense of self-preservation is strong in this one.

Two men led me to the edge of the platform and told me to hold my arms out. I looked down at the canyon below. The Zambezi River looked like a tiny trickle of water running along a gutter. 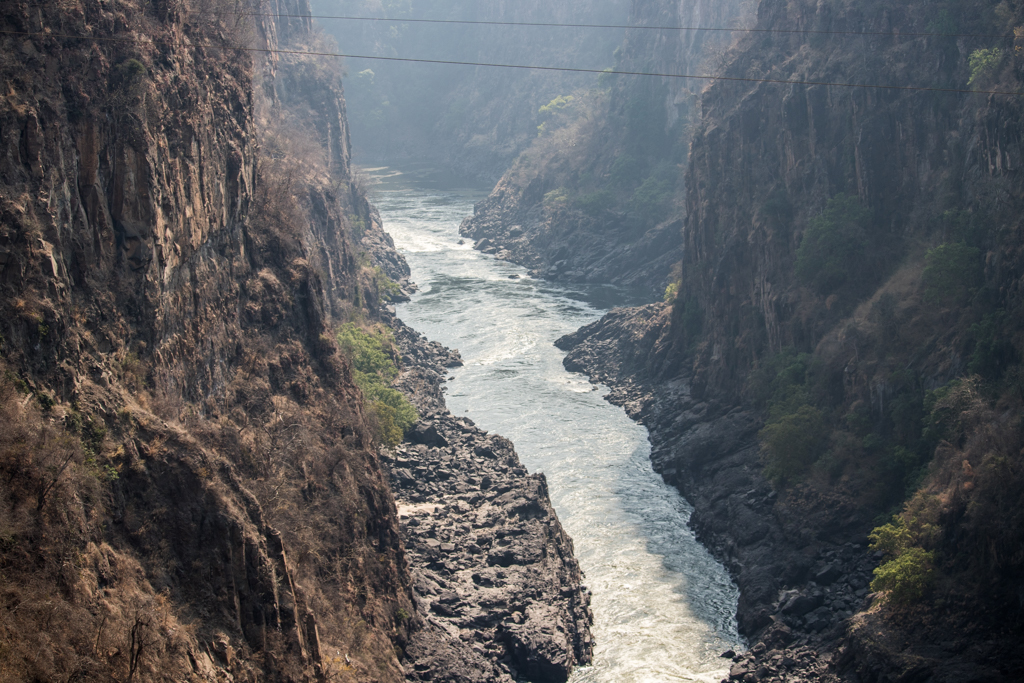 They edged me off and guided me over the edge. 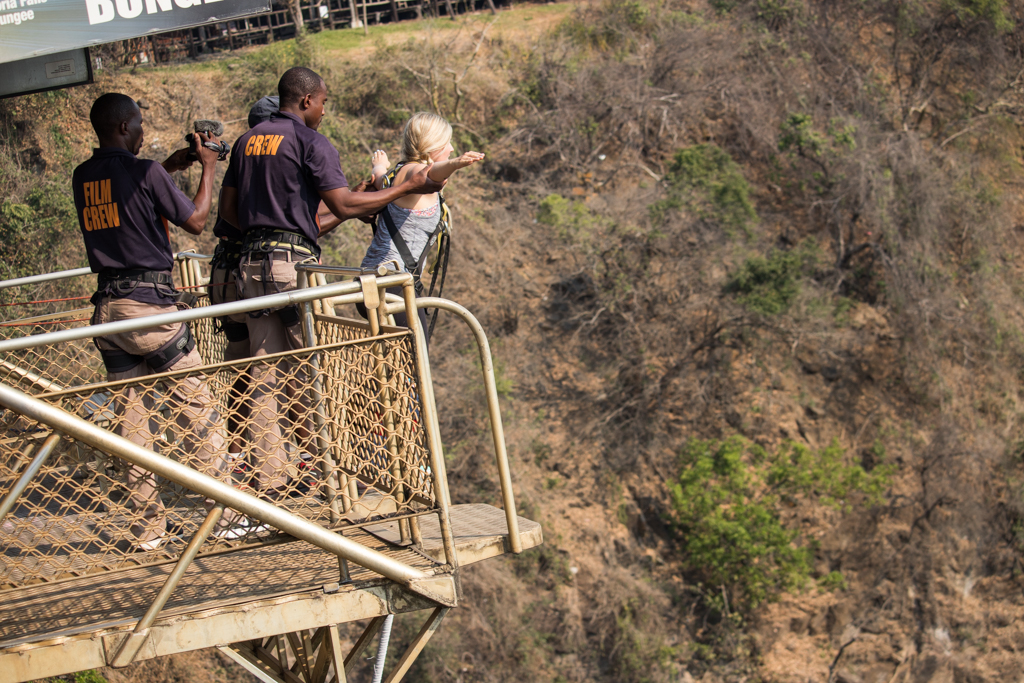 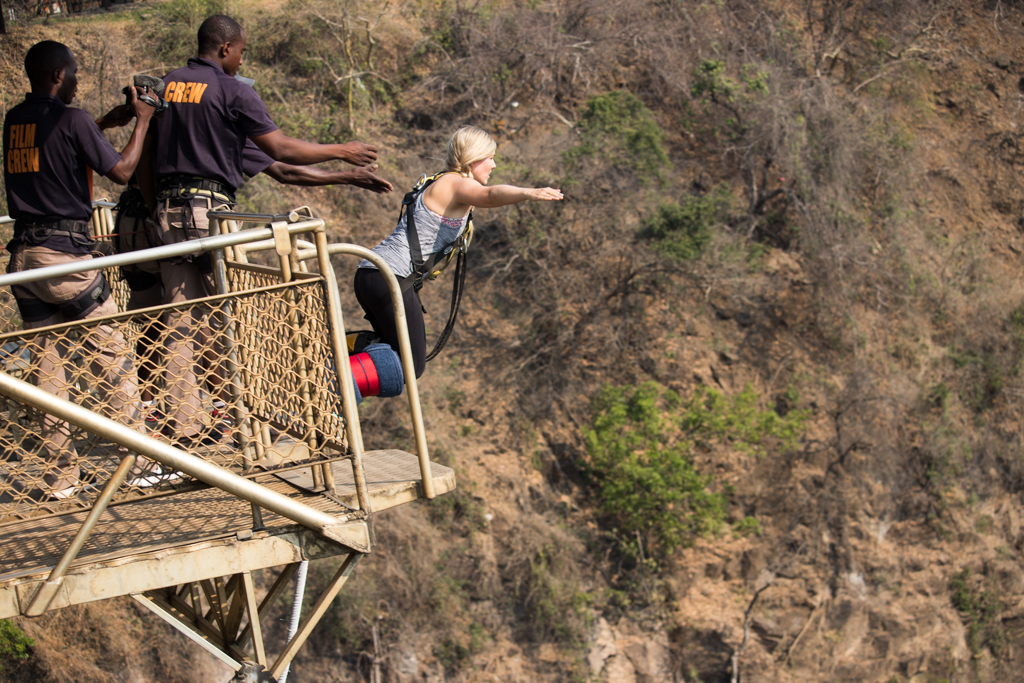 “AAAH!!!” I screamed. It might have been an expletive but the blood rush to my skull has affected my memory. All the birds fled the canyon and the fish darted to the depths from my yell. 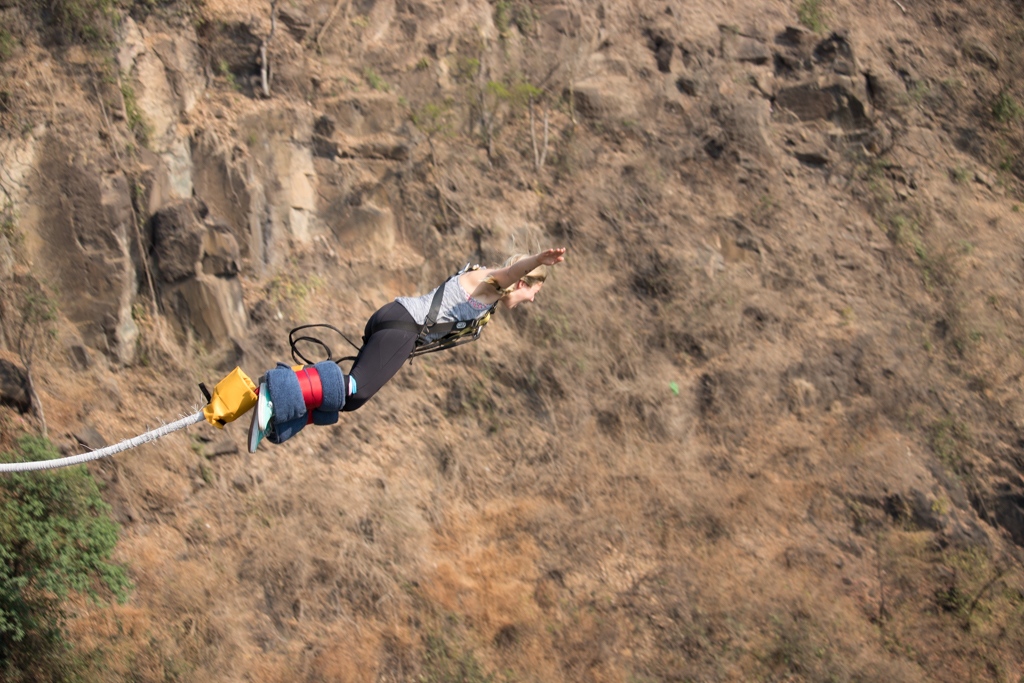 I couldn’t grasp my orientation. The rope spun me around in circles and it felt impossible to tell up from down. After the first bounce I trusted the rope and the following free-falls filled me with excitement and adrenaline. My fear transformed into pure bliss. 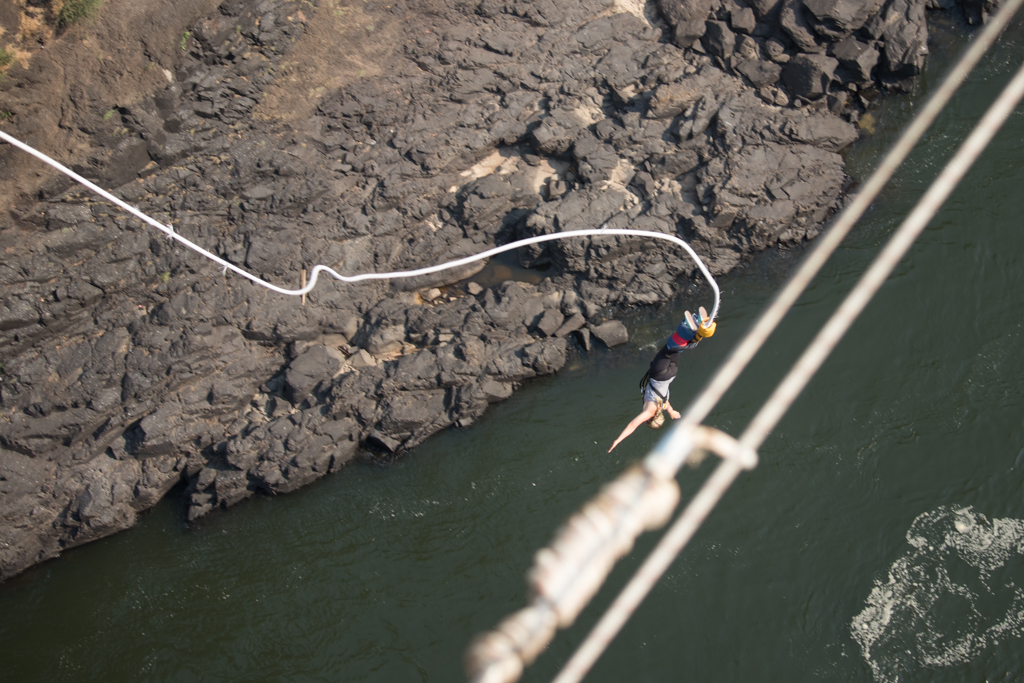 Then, my hands started tingling. I wondered if that meant I would black-out. Paranoia crept back in and I remembered my feet were tucked behind two towels. Did I feel them slipping? 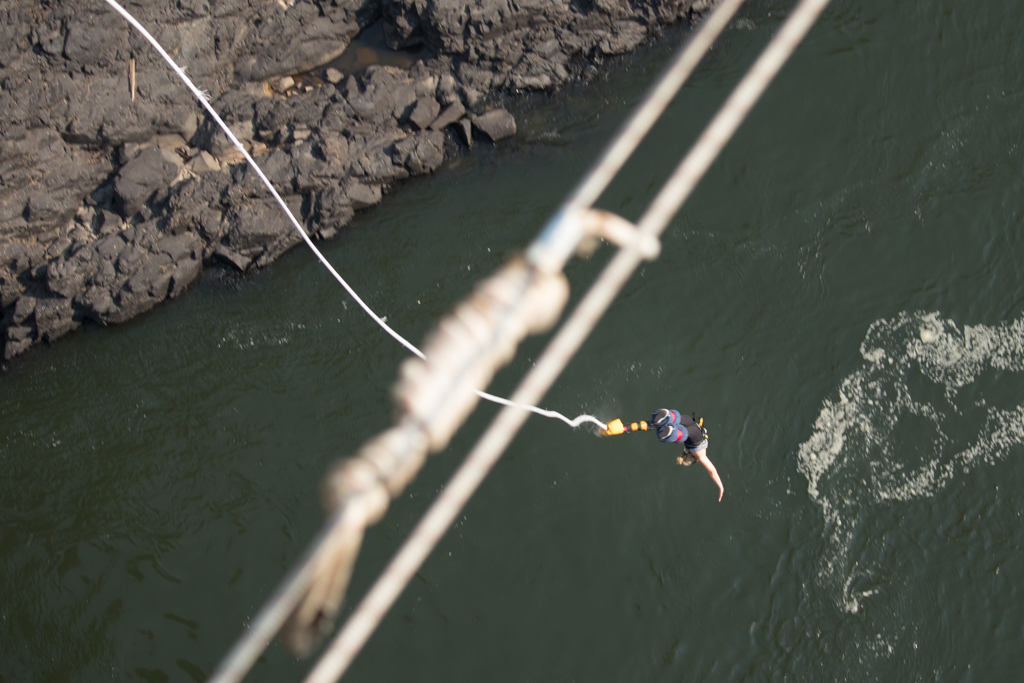 The rope eventually stopped bouncing and swaying. A man hanging from a bungee cord and a harness pulled me over to him. He had a stoic face that looked like it hadn’t cracked a smile in thirty years. Ah well, I wouldn’t let him snuff out my elation from surviving the jump.

The Victoria Falls bungee jump workers guided me to the underside of the bridge. They greeted me with huge smiles and showed me how to clip and unclip my harness along the bridge and back to safety.

I lived another day.

I finally made it to the top and looked over the bridge’s railing. A male tourist prepared to make the leap.

I watched him and thought, if his rope snaps… man. That’ll be a real show!

Don’t wear loose clothing. Athletic wear or jeans are a good option. You’ll want to tuck in your shirt before the jump, or wear one that clings to your body. Wear closed-toes shoes, not flip flops.

Is the Victoria Falls Bridge bungee jump safe? There has been one known instance of an accident on the Victoria Falls bridge. The operation has been open since 1993 and there are 200,000+ jumps without incident to date. There are safety features in place to ensure that your jump goes smoothly.

However, if you have any sort of leg, back, heart, or neck issues, don’t jump. Most injuries from bungee jumping happen when people jump with a pre-existing injury, and you might experience whiplash. The force of the jump is intense and could cause issues. A few seconds of fun aren’t worth an injury – especially if you’re prone.

If you’re not keen on the Victoria Falls Bridge bungee jump or want to do more, consider the gorge swing, bungy jump, and zipline. You can also swing from the bridge instead of diving headfirst into the canyon. The zipline is the best option for those who want a bit of excitement, but nothing too extreme. There is also less risk of injury with the zipline as you’re carried across the gorge on a smooth ride. I had friends do these options and they all loved it.

Quite different to the bungee jump I’ve done before, the employees at the Victoria Falls Bridge bungee gently guide you off the edge of the platform. I prefer the guided method to jumping on your own because you don’t have as much time to psych yourself out of jumping. 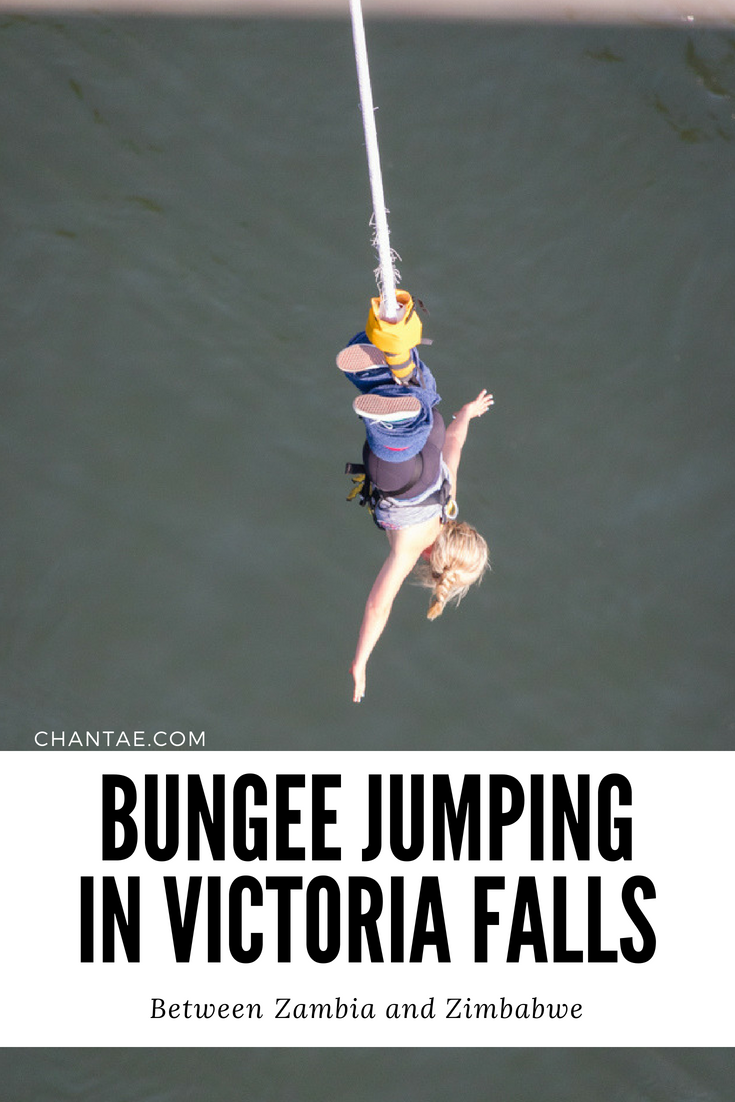 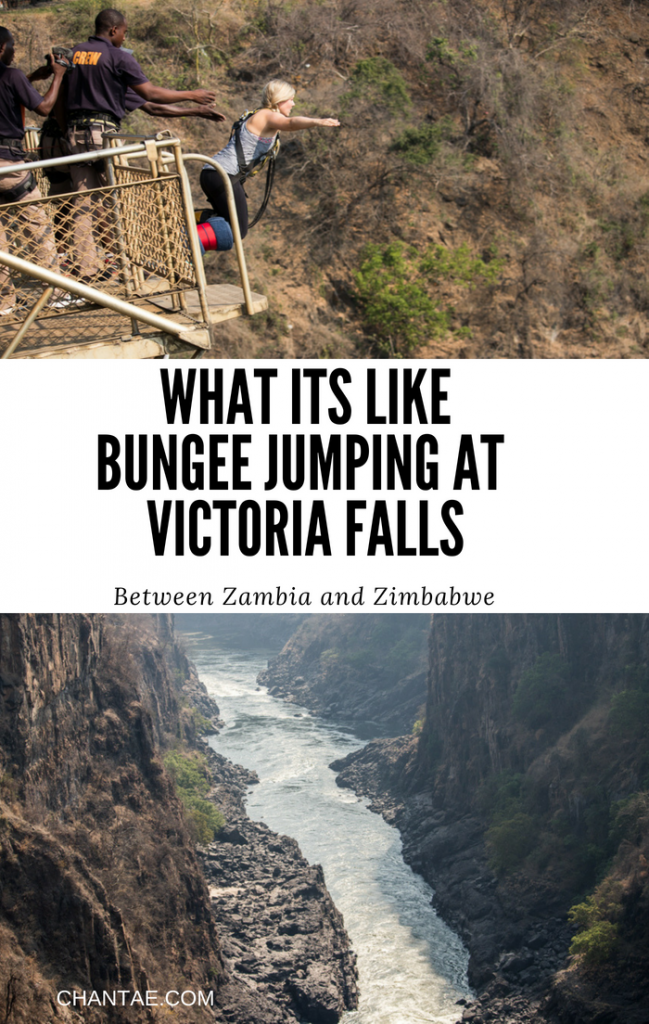 My trip to Zimbabwe was hosted by Zimbabwe Tourism Authority. I received a media rate for this bungee jump. Obviously, all opinions are mine, all mine.