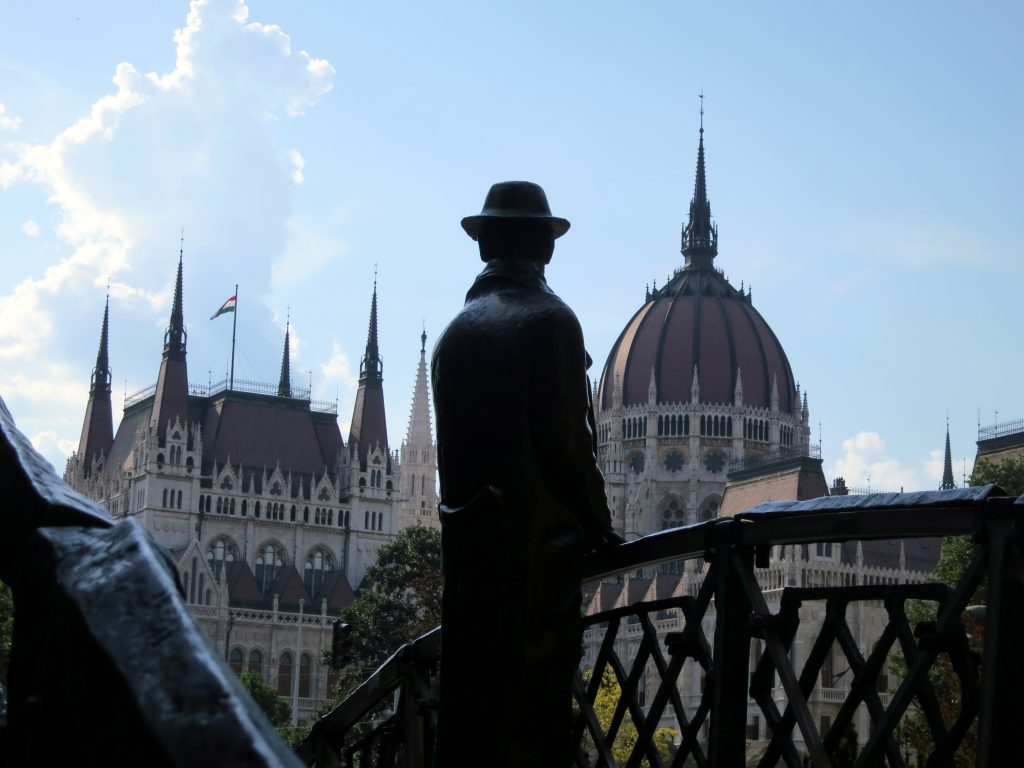 Budapest, Hungary: Ronald Reagan’s Appearance and a Wild Night Out

Although the sky spanning over Buda and Pest was warm and muggy, I viewed it as salvation from the crazy man I had been trapped in the car with for the past day who just so happened to be driving me to my hostel. Once I arrived, I opened the front door and found a snoring English boy passed out face down on the couch (yes, I could tell he was English through the accent of his snore) and acquired a map before hitting the streets. Upon first impression, Budapest seemed to be stuck in the 90s – a stark contrast from the mega modernized Swiss cities I just spent time gallivanting through. Places that accepted credit cards were few and far between and comic sans seemed to be the sign font of choice. My weary body only allowed me to meander through the city center and hunt for lunch — if only I’d had this vegan guide to Budapest back then.

I decided to go to one of the famous Hungarian spas that I had heard from a few of the boys at the hostel.

I was surprised to find that the spa building was a form of yellow architectural magnificence. And inside, the spa area was dotted with many tiny… too tiny… surprises as well. The surprises being extremely small speedos… so many speedos… on extremely plump men. After traveling through Spain, nudity no longer shocks my conservatively American eyes, unless of course it comes in the form of hundreds of congregated men in a few small pools. My brain thankfully adjusted and only lingered on the question of why are people swimming in the Jacuzzi wearing goggles? If anything, they should be wearing blinders. The lounge chairs were available by paid reservation only, and after a few minutes of spa settling, I plopped myself straight onto the cement and fell into a deep slumber. How long? Nobody knows for sure. Definitely long enough for my book to blow away into the water and long enough for somebody to return its soggy blob of pages next to me.

I awakened from my speedo surrounded hibernation and went back to my hostel to meet two Dutchies. One of them recently met his girlfriend in Argentina, and is going back to see her as soon as possible. It’s interesting how many people I’ve met who adventured into intercontinental relationships since getting in one myself.

A misunderstanding of reservations happened, forcing me to sleep on the living room couch like the English predecessor before me. I immediately changed to a different hostel, one much more centrally located with fantastic décor.

Later that day, I went on a tip-based communism tour of the city.

I LOVED IT. Every minute. And my guide, a Hungarian girl, was fabulous.

The tour reflected on the rise and fall of communism. She mentioned that some Hungarians, especially the older generation, harbor nostalgia towards life during the communist era. For example, travel to other communist countries was cheap but Western country travel was generally forbidden. If you could go, it was extremely expensive and tours were set up to closely monitor the travelers to scope out if any were obtaining any pervasive ideas.

Additionally, since communism prevented intercompany competition, advertisements served little purpose on TV. Often, the government would simply run a commercial saying, “Drink Milk” between programs in an effort to boost dairy consumption. I guess I can see why communism is a good idea… My degree in political science has forced me to look at the pros of each party, and commercial-less TV is definitely a benefit of no market economic competition.

Communism in Budapest can best be seen through the architecture it’s built from. After much of the city was destroyed in WWII, the city planners built temporary buildings inspired by the Danes, meant to last only ten to fifteen years, while new permanent structures would arise. However, these “temporary” buildings were never replaced, leaving many people living in extremely small apartments made from old materials. Kitchens were often built too small to host any guests, in an attempt to keep people from mingling in privacy. Can’t have anybody sharing those pesky individualistic ideas over supper! In a town where any semblance of a religious street name is replaced by Marx Dr. or Lenin Ln., tokens of “Big Brother” seem to be everywhere. Take for instance the square where a memorial of USSR soldiers stands (and is heavily gated) complete with the seal of the hammer and sickle… and conveniently located outside of American Embassy windows. It’s no surprise that in 2011, America gave Budapest the gift of Ronald Reagan… who happens to be symbolically leading the Hungarian parliament building, through the USSR memorial, and to the American embassy. Perhaps Putin will bring a new gift this Christmas. I delighted in showing pictures of this to my dad, who – if he had it his way – would have named me Ronalda and my sister Reagano. Budapest’s nightlife is infamous. My hostel was dead, so I simply wandered to a bar that had good reviews online. Within an instant, I camouflaged into another hostel’s pub crawl. It was led by the owner, a fifty year old man named “Tiger Tim” and the crawl group consisted of a few oddly mismatched characters. Tiger Tim took us to Spinza, which I definitely recommend. Some of the group members heard where to find hard drugs, and left early in search of them. Rumors state they were sold a batch of sugar.

So then it was me, Tiger Tim, a heavily tattooed American school teacher, and a Mexican guy. Tiger Tim seemed to take a liking to me, and I prayed that it was a paternal rather than sugarbaby type appeal… so I politely excused myself and met a group of Hungarian girls to hang out with for the rest of my night.

Things only became awkward with the Hungarian girls when one of the girls took a shot of vodka and said, “I love American boys. I may have fallen pregnant with one from Miami.”

I walked back to my hostel along a brightly lit main road. Two Belgium boys stopped to ask me if they could, “make pee pee” in my hostel. I replied that since this particular road smelled like urine anyways, he should “make pee pee” somewhere here. He obliged, and I quickly walked as fast as I could down the street, darting into my building.

Budapest offered everything I would want in a city. A complex culture was seen in the literal bricks of the buildings, friendly people, amazing architecture, a genuine learning experience, and while most backpackers come here for the nightlife, I really felt like I left with much more.