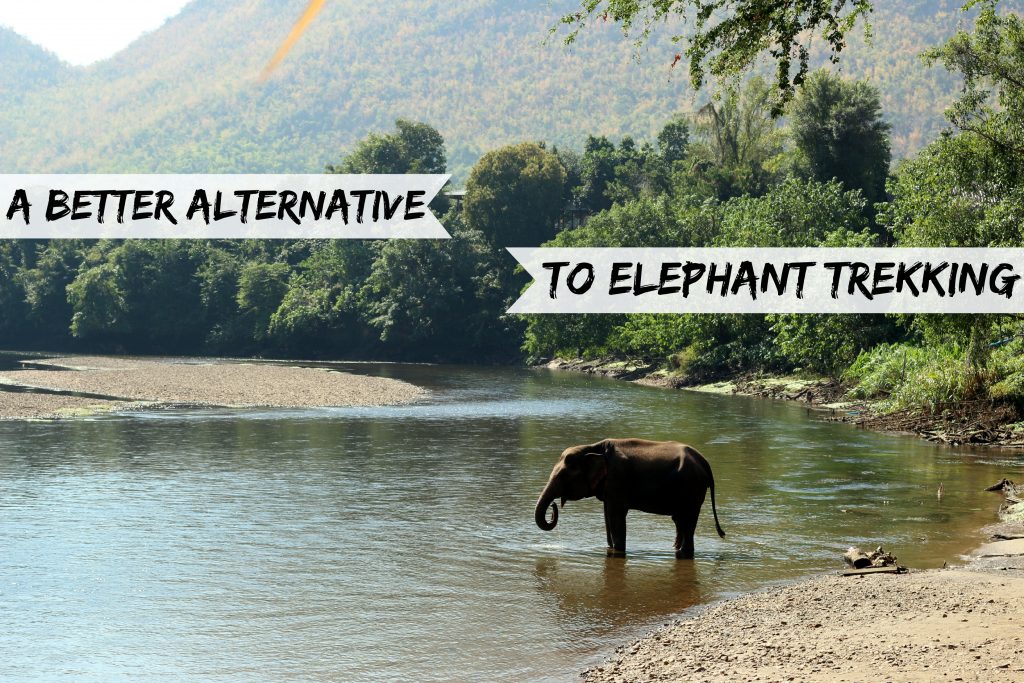 Working for Elephants: A Better Alternative to Trekking in Thailand

There was a time where I enjoyed going to SeaWorld (like any San Diegan has) in blissful ignorance. As a child, I’d declare dolphins to be my favorite animal and routinely doodled pictures of Shamu on the margins of my school papers. In high school, my best friend and I even had yearly passes to SeaWorld and it became a frequent hangout spot.

And like many San Diegans, we’ve found ourselves at a crossroads when Blackfish came out along with a tidal wave of information declaring that as it turns out, massive creatures meant to migrate thousands of miles from ocean to ocean don’t do as well as we’d thought in a captive environment. Do we continue to support an industry that both helps and abuses animals? In some ways, Blackfish is a modern day version of Upton Sinclair’s The Jungle when it comes to animal rights. It highlighted one question in my mind:

Should animals suffer at the expense of human entertainment?

While we were traveling throughout Thailand, I buried my nose in the book Love, Life, and Elephants: An African Love Story where Daphne Sheldrick recounts her life living in Kenya raising orphaned African elephants. Throughout her life, she learns that elephants experience emotions in extremely similar ways to humans. Moritz, his parents, and I walked past an elephant riding station that treated the elephants like living amusement park rides. People would take a ticket, line up, and wait for the elephant to walk up to the raised platform, unload the current passengers, pick up new ones, walk through a fenced off course, and repeat. It was as if the living elephants had replaced the mechanical Dumbo ride at Disneyland. The elephants had wounds from ill fitting metal seats chafing along their spines from so many hours of work. The scene was topped off with two buff men in Bintang tank tops hopping on and hollering. It made my stomach turn. It’s estimated that only 2000 wild elephants are left in Thailand, and much of their illegal hunting and capturing is thanks to the hands of tourism. With the influx of tourists increasing to Thailand every year, elephant trekking has turned into something commercialized and industrial, where the elephants work long hours in poor conditions.  Research in elephant anatomy shows that elephants shouldn’t be carrying more than 100 kg on their backs anyways… and the seat usually weighs 50 kg alone. Not only this but taming elephants is a brutal and inhumane process, and begins in infancy. One article I’ve read that struck me in particular is Expert Vagabond’s take on elephant trekking. There is a debate around whether or not boycotting elephant trekking takes away from poor minorities’ livelihoods — who treat their elephants well — but from what I’ve gathered, there’s no nice way to train the elephants in the first place.

Luckily, Birgit had found ElephantsWorld, an organization that adopted elephants into a sanctuary program. Most of the elephants were retired from the logging, trekking, and circus industries.

Early in the morning, we were picked up by a truck from ElephantsWorld and taken to the sanctuary in Kanchanaburi. Elephant’s World motto is: “Where we work for the elephants” and I had no idea how literal this statement would be. Throughout the course of the day we’d be chopping banana trees, cooking sticky rice balls, and bathing the elephants. Things were going to get messy!

ElephantsWorld has a reputation for being a retirement home for elephants since most of them are encroaching on 60+ years, but there was a rambunctious seven year old bull elephant, Johnny, who loved stirring up trouble among the old folks. He’d raise his trunk, release a huge bellow, and jump back startled at the fact that he’d made such a loud sound. He’d trumpet until the older elephants gave him a look that translated into, “keep it up and your hide will get a whoopin’, boy!”

Upon arrival, we prepped baskets filled with fruits for each of the elephants — tailored to their preferences and needs. Some loved bananas, while others preferred the crunchy rind of a ripe watermelon. One mahout told me to feed the elephant directly into her mouth because she had poor eyesight. Another mahout told me to do the same with his elephant.

“Oh, does this elephant have poor eyesight too?” I constantly had to guard my basket from elephants looking to steal a banana or two out of the others. A stealthy trunk would sloooowly reach over, pluck a banana, and quickly pop it into their mouth all while looking in the opposite direction. Johnny was especially guilty of this.

Occasionally, I’d feel a puff of warm air shoot out of an elephant’s prickly and wrinkly trunk if I didn’t immediately-right-this-second feed the elephant one banana directly after the other. The tip of the trunk had little wire hairs that prodded me as if to tap me and say, “Excuse me, you’re a bit late on the next banana!” Since the elephants can’t roam freely in the park at all times, they are each guided by mahouts. There was a definite separation between “us”– the (mostly) white tourists, and “them”– the Thai mahouts. Even the European mahout seemed to be distant from the Thai mahouts. I’m not exactly sure what this signifies, but the tension was there. Perhaps diving into this topic would be jumping straight down a cultural rabbit hole. We went down and cooked sticky rice balls for elephants that could no longer chew. Massive vats of rice and vegetables were rolled together into gooey, sticky, rice balls. We rolled the balls in flour so that they wouldn’t glue together and then fed them to the senior elephants. Many elephants starve to death in the wild because their teeth grind down, leaving them unable to chew. Some of the elephants at ElephantsWorld were encroaching on 75+ years! So, the seniors were treated to handmade sticky rice balls packed with vitamins to keep them going. I’d plop a ball into their mouths and recoil my hand quickly to avoid getting licked by a wet tongue. At the end of the day, we went down to the river and bathed the elephants. Johnny took this as an opportunity to trumpet and splash the other elephants. Moritz left the park with red eyes thanks to one firehose-like spray that shot out of Johnny’s trunk and landed directly on Moritz’s face. ElephantsWorld is still a growing organization. At the time I visited, they were raising money to buy a elephant-proof fence to allow their elephants roam free and without the use of chains (some elephants had to be tied up to prevent them from wandering into their neighbor’s farm). Another change I’d love to see is the banishment of the mahout’s bull hooks. The tour leader says this is a harmless way to communicate with the elephants, but there are other elephant nature parks that do not use them at all. Hopefully as ElephantsWorld gains the resources it needs to make the entire place more of a haven for the elephants, these changes will follow. They currently run a volunteer program where you can live with the elephants, and the volunteers who were there at the time said they absolutely loved it.

Would I have gotten this experience participating on an elephant ride with little connection to the animal? No.

I’ve been wringing my hands at writing this post. I often see pictures of my friends (some of who tell me they follow this blog) riding elephants, going to tiger temples, feeding monkeys, and participating in other forms of animal tourism — and I used to too. However, hopefully the conventional circus-esque way we used to interact with animals will give way to this new type of tourism where you can spend quality time interacting with animals in need or viewing them in the wild instead of using them as a form of cheap entertainment. Thailand will never be the same as it used to be. Elephants will probably never have the ability to roam freely through the jungles as they once did. But, the same tourism money that used to fund their demise can now fund healthy human-animal interactions in sanctuaries where the experience is 100x better anyways! It’s a win for the elephants, and a win for us. In October 2016, I visited Elephant Nature Park in Chiang Mai, Thailand where the elephants were given more space than the ones at Elephant’s World. Bull hooks also weren’t used, and I had an overall better feeling at ENP. After comparing both nature parks, I recommend that you choose to visit Elephant Nature Park over this one. You can read my full guide and write-up about Elephant Nature Park and compare which experiences suits you more.