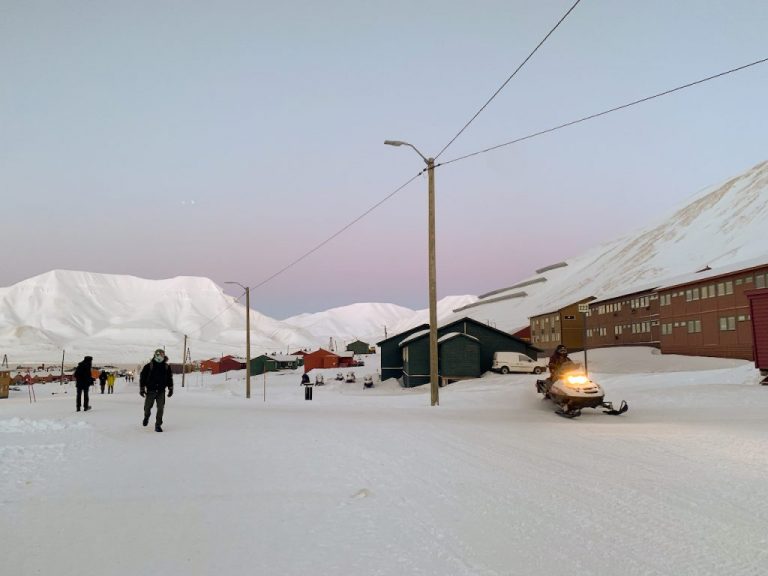 Your Northernmost Trip: Things To Do In Svalbard, Norway

But visiting this Arctic wilderness is about much more than ticking off a bingo list. From incredible winter wildlife to abandoned mining towns, this is adventure tourism at its finest – and chilliest.

Choosing when to visit is your first big decision as it will directly impact what you can do. In the summer months the main settlement will be snow-free, meaning you’ll have to travel much farther for snow-based activities. On the other hand you will enjoy 24-hour sunlight, so there will always be something to see!

For me, prime time is March to May, known locally as the “sunny winter”. It’s when the sun has returned after months of darkness and there is plenty of snow on the ground. The “Sun Festival Week” in early March is an especially happy time, although many of the best activities and tours only get going a few weeks later. Bear in mind that while visiting before March is a fascinating experience, the almost complete lack of anything resembling daylight does limit the activities on offer.

Whether Longyearbyen is the world’s northernmost town or not is a matter of definition. One thing’s for sure though: you’ve never been anywhere like this before! The memories start with the journey there.

First things first, get yourself to Norway’s capital, Oslo. Then, you still need to fly more than three hours due north. As you swoop low over bright white glaciers, as far as the eye can see, you will start to doubt that there could ever be a town out here, and wonder how it could be possible.

The answer is simple: coal. In 1906, the American John Munro Longyear founded the town and sold it to a coal mining company. For decades, Longyearbyen (named after its founder, the literal translation is Longyear Town) was a functional company town to provide homes and services for the miners and their families.

Coal mining still takes place but on a much smaller scale. The town sustains itself now on Arctic research and sustainable tourism. While much of the things to do on Svalbard are about getting out of the town, don’t miss the opportunity to explore this fascinating place, visit the museums, and meet some of the 2,000 people who actively choose to live here, year-round. They have some stories to tell, believe me.

If you’re wondering if such a town could ever be sustainable on its own, a visit to Polar Permaculture is a must. Owner Ben has a true passion for creating a sustainable community and grows microgreens, leafy greens and herbs that many of Longyearbyen’s hotels and restaurants take full advantage of.

You can’t take too many steps around Longyearbyen without bumping into an image of a polar bear. It’s a true icon of the islands and humans are mere guests here on their natural habitat.

Sightings of the real king in the north near inhabited places have increased in recent years as the ice melts and food becomes scarce. One such encounter captured the attention of the world’s media last year when a polar bear broke into and trashed a dry storage room in search of a meal.

Such is the danger posed by polar bears that you are not permitted to leave the town without a weapon, and the knowledge of how to use it. As such, organised wildlife tours are your only real option to spot a bear in the wild. The best choice is a multi-day boat trip along the coastline. Even if you don’t see a bear, you’ll enjoy spectacular scenery that you can’t see any other way. Other late winter and spring highlights include the small wild Svalbard reindeer and the gorgeous Svalbard rock ptarmigan with a coat so white it’s tricky to pick out against the snow.

A safari by snowmobile or snowcat

Snowmobiles aren’t just a tourist attraction here, they are used by locals going about their daily business. If you’re visiting outside the summer season, join an organized tour ranging from a couple hours to multiple days. This list from Visit Svalbard ranks many available tours by their difficulty and/or experience requirements.

If it’s too cold to explore on foot and you don’t like the idea of snowmobile driving, the quirky snowcat is an ideal alternative. The giant vehicle keeps you warm and is a wonderful way to tour Longyearbyen and its surroundings.

While Svalbard is administered by Norway, the Svalbard Treaty gives all 46 signatories equal rights to engage in commercial activities on the islands. Other than Norway, only Russia makes use of that right. From Longyearbyen, you can travel by boat or snowmobile to the Russian settlements Pyramiden and Barentsburg.

Today the former mining town Pyramiden is home to seagulls, polar foxes and the odd polar bear, but no humans aside from a couple of maintenance engineers. A visit here is like stepping back in time to the former USSR. Take a tour of the abandoned buildings including an indoor swimming pool and kindergarten. It’s an eerie place, but utterly fascinating.

Russian culture is still very much alive and well in Barentsburg, which is home to a few hundred Russian residents. Barentsburg is much more of a company town of the type Longyearbyen used to be, yet tourism is slowly catching on. The husky kennels and Russian orthodox church are well worth a visit.

Whether you want to visit the Russian settlements or tour the archipelago looking for wildlife and birdlife, there are many options out there. Almost all are run by fairly small businesses with guides who live on Svalbard, so you’ll almost get history and culture lessons thrown in for free.

Dress for the climate, bring plenty of patience, and this stunning Arctic wilderness will reward you. My favourite part? Writing down my memories at the end of a long chilly day, with a beer from the world’s northernmost brewery in hand.

David Nikel is a British travel journalist living and working in Norway since 2011. He is the author of the Moon Norway and Moon Oslo guidebooks, available now from Amazon, Barnes & Noble, and all good bookstores.