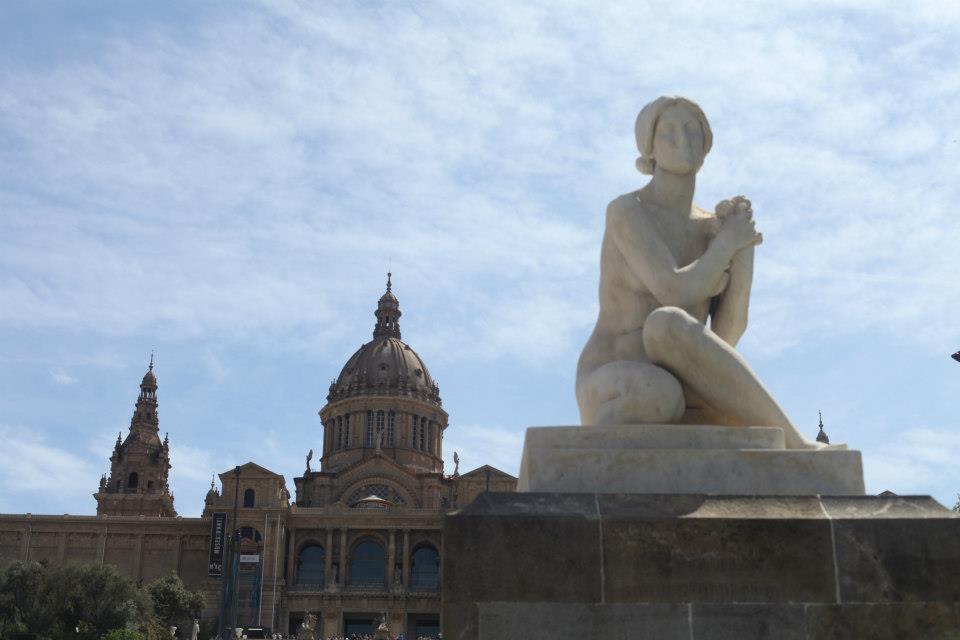 Lauren took this near the magical fountain

Barcelona! More Than a Club!

Confession: In Madrid, I claimed to be a Real Madrid fan because somebody lied to me that’s the team that Gerard Piqué aka Shakira’s husband played on. Now, you can scold me for not doing my own research — I know, I know. So I arrived in Barcelona as a Real Madrid fan for the sole reason of believing that I was rooting for Mr. Shakira.

Turns out, he’s actually on FC Barcelona. Feeling torn over my professed love for Real Madrid, I hesitantly switched over my loyalty to FC Barcelona.

This becomes semi relevant later in this post, but mostly I needed to get that off of my chest.

We arrived at our couchsurfing host’s house — who I affectionately refer to as “Papa T,” because he, “felt like he was babysitting” Lauren and I the entire duration of our stay. The good thing is that Papa T has a serious case of baby fever, so it worked out well for all of us.

Papa T lived in a small and beautiful beach town called Casteldefells. We arrived late at night and went immediately to grab some Spanish cuisine. I had trouble understanding much of the Catalan, the language spoken in the Catalonia region of Spain.

Lauren and I spent our first day walking around the city of Barcelona.

We saw a crowded beach and plopped ourselves dead-center of it. I closed my eyes and listened to the wind… and…

My eyes popped open at “quesadilla!” I scanned the beach in search for it.

Turns out, the man was yelling, “Ice cold beer!” and it somehow sounded like quesadilla to my growling stomach.

I closed my eyes in disappointment.

One man came up with a booklet of cheap tattoo pictures and rested it on Lauren’s stomach. The wind flipped it to a page of Playboy Bunnies and naked babies doing inappropriate things.

“EWWW!” I screamed. Lauren grimaced. The man apologized and flipped the page to a picture of a badly drawn sun and flower?, but the damage had been done. I would never unsee what I saw.

The quesadilla inspired us to check out a Mexican restaurant, La Rosa Negra. Being from San Diego, Lauren and I are very critical of Mexican food. We can smell a fraud a mile away. Luckily, this food was delicious!

We fueled up to meet Papa T at a nearby pub to watch the futbol game between FC Barcelona and Paris. The entire place was packed and I was constantly tiptoeing to see the TV.

We spent the rest of the night out in the city.

In Papa T’s couchsurfing messages, he noted that he knew of a “magical fairy bar.”

Papa T asked me, “What do you think we’ll see at the fairy bar?”

“Nahhhh. It’s just a bar with a painting of a fairy somewhere in it.”

My dreams were crushed, and Papa T followed his statement with, “you’re so naive.”

We got to the fairy bar, and… it was like I imagined! Minus the robot fairies (which maybe would pose a liability).

The next few days, Lauren and I did a lot of stereotypical sightseeing and beach going.

At Parque  Güell, we strolled with smoothies in hand and the sound of Los Micronaguas in the background.

Papa T had two German guests visiting and we spent one of the nights out near some clubs by the beach. Overly pushy men prowled in abundance, but Lauren and I (and Papa T — who is very, very tall) did a good job fending them off. One of the men found me repeatedly, and after a firm NO to his request of “is it ok if I stay around?” He said, “owie! owie! You’re rejecting me!”

Sadly, Papa T had us stay somewhere else for a night or two while he worked. Our next host is probably the reason I will be extremely selective about who I travel with and where I stay from now on, especially when traveling alone this coming June – August.

Lauren, our new host, his roommates, and I all went to La Ovella Negra, a popular pub that features 5 litres of sangria for cheap! Lauren and I introduced them to a few American games, and we all were having a blast.

Back at the apartment, the host asked where I wanted to sleep. I told him that Lauren and I always stay together, so the couch would be fine for us. The couch was too small for two people comfortably and he only had one thin sheet. Why did he state that there was room for two people on his CS profile then? I asked. He said, “One in my bed and one on the couch.”

Yeah, not happening. Lauren overheard the conversation and came in the room to defuse the situation, and we both crammed on the couch for the night.

Thankfully, I’ve overall had a great experience with couchsurfing and had never felt uncomfortable before — but it’s important to always have a backup plan and know where to go if things get creepy or something just isn’t right.

Lauren and I spent the rest of our time on the beaches of the Mediterranean during the day, and out in the city by night. We got into a goofy habit of freaking out overly pesky street vendors.

A group of 10 men trying to sell cheap beer walked toward us and I randomly started screaming as loud as I could. They immediately ran backwards and I could make out one of them screaming back, “oh my god! That woman!!!”

When we were confronted one-on-one by vendors, I’d tell them, “no thank you” to cerveza, but asked if they knew where I could get a spare kidney. After a confused look spread through their face, I’d reiterate and point, “you know? body organs?” The harassment completely stopped.

We spent the last day in Sitges, a quiet town off of Barcelona and waded in the Mediterranean.

I was sad to part with Lauren before flying to Australia — she was my little soul travel mate after all, (but she is now in KENYA visiting one of my best friends, Mackenzie,  in the Peace Corps and you can follow her blog here).

Some things I think went well for my first month:
Traveling with Lauren: we were constantly laughing together, staying calm in any fiasco-type situations, and bonded immensely.
Staying safe: we always made sure to “prevent the preventable,” as Lauren likes to say.
Budgeting: I stayed consistently under 20/Euro a day.
Meeting people: I feel like I have worldwide friends now

Some things I could work on:
Eating better: It’s hard to resist fresh bread!
Sunburns: enough said.
Staying in contact with family and friends: I haven’t forgotten you, promise!
This blog: I need to update more frequently and having a keyboard would probably help with this.

Insomniac? Read about the rest of my Spanish adventures in Madrid, Seville, or Granada!