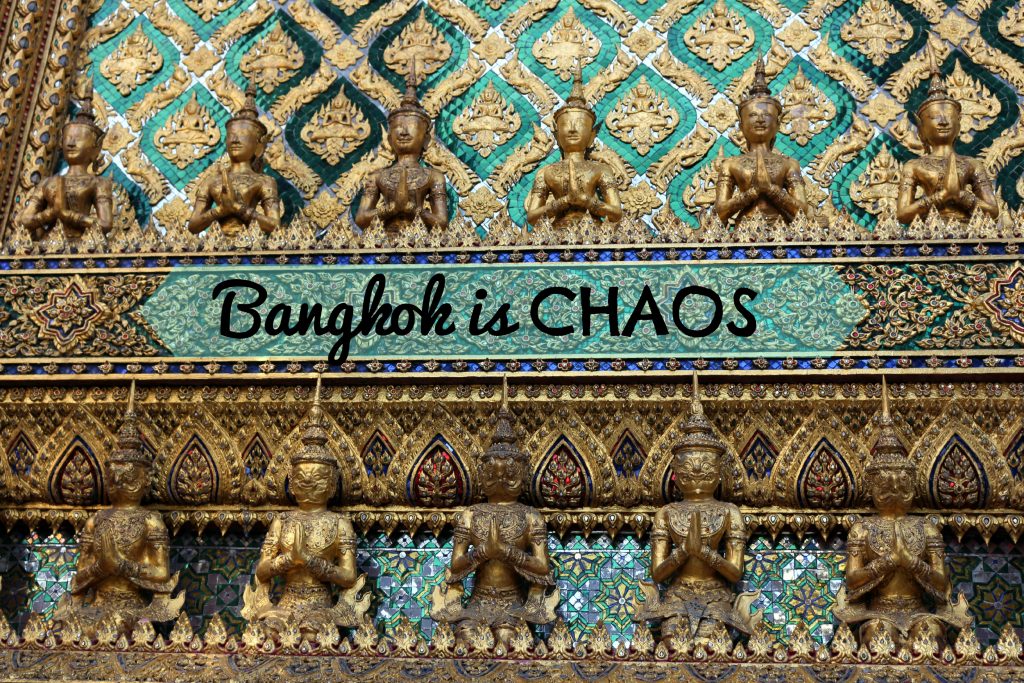 Bangkok is Chaos: The Clash of Consumerism and Religion

On my left I see a billboard that commands, DO NOT GET TATTOO OF BUDDHA! BUDDHA IS SACRED. On my right, a TV screen spanning across an entire skyscraper advertising SAMSUNG’s latest phone. Overhead is a large picture of the king with the words “LONG LIVE THE KING” bridging the 12 lane freeway that Moritz and I are currently stopped in traffic on. Traditional buildings still intact were bore weight of modern and sterile megastructures built upon their antique rooftops. The driver of our bubblegum pink taxi has promptly seen this traffic stop as an impromptu nap time, and I give the back of his seat a nudge each time the parking lot of a freeway lurches forward. Inside the taxi the driver printed a sign with a few rules — no knives, no guns, no food, no durian. Oh, and no sex. (Durian is a stinky delicacy of Southeast Asia, with dedication “durian guys” in places like Penang, Malaysia )

The temples and supermalls compete for attention. In front of the largest shopping center, an elaborate shrine is placed with hundreds of people kneeling before it – before they enter the mall to spend hundreds of baht on the latest items.

Moritz and I met up with his parents for three weeks of family time and relaxation in Thai paradise for the holidays. It only makes sense to meet in the middle with his family and Germany, and us in Australia. I am so thankful for the gift of this trip from them for Christmas.

Even though Thailand has been heavily treaded by travelers, it’s always held a strong allure to me with it’s gold plated temples and copper eyed elephants. Buddhism blankets Bangkok in every way. Busy Thai people make time to stop and wai at manicured shrines of Buddha while rushing from place to place while spectacular temples loom overhead in the background. With the shine of golden Buddhas and a religion that permeates everyday Thai culture, Moritz, his parents, and I visited Bangkok’s religious sites.

The Grand Palace is the official home of the king since 1792 and is an elaborate complex of detailed buildings, one of which houses the Emerald Buddha. Upon arrival, palace workers scan tourists for skin, redirecting arm and leg revealers to a sarong loaning station. Moritz was whisked away to put on pants, and while I was initially let through, a second glance from the worker sent me to the loaner station as well. With gold paneled mosaics, gargantuan monster-like guards at the entrance, and infinite ornamentation, the entire complex demands to be noticed. We walked into Emerald Buddha’s temple, where devout Buddhists kneeled before him with their toes tucked underneath them — it’s rude to point your feet towards Buddha — while tourists clung awkwardly to the back walls. Next, we went to the Reclining Buddha, a massive (and indeed, reclined) 43-meter-long gold plated statue housed in a cramped temple. It took us a few minutes to walk from head to toe, and a clink clink clink of people dropping coins into donation tins pinged in the background. No matter whether I visit a grandiose Cathedral in Paris, or a temple in Bangkok, luxury cloaks the gods. The gods seem to get all of the riches, even if they may not exist. Meanwhile, shacks made of rusty corrugated metal exist outside of the temple walls. I know that many of the donations go to the underprivileged, but it still has always felt odd. Would God rather reside in an elaborate Cathedral or temple with coins clinking in the background rather than the bare bones movie theater turned into a makeshift church I grew up with? Gods in every religion never struck me as the precious type, but people love treat them that way. We crossed the river via a small ferry at a port where vendors sold dried fish and exotic fruits. A sign reading, “feed the fish – 10 baht” caught my eye, but the brown water was too opaque to see any fish. I didn’t want to know what type of mutant would come to the surface if I threw a cracker in the water, so we passed on the experience. We arrived just a few minutes later at Wat Arun, the Temple of Dawn, and the entire area was sparse of people in comparison to the previous sites. Moritz and I trekked to the top and had a birds eye view over the river and rest of Bangkok. As the Thai don’t actually say, there’s no such thing as too many Buddhas. Golden Buddha was the last stop on our temple self-guided tour. He can be found hidden between a few ramshackle restaurants in a well maintained alleyway.

It’s impossible to escape the message every large company wants to send with video advertisements spanning across apartment buildings, buses, and billboards. We stumbled into a labyrinth of shops at the Weekend Market, where thousands of shops set up 9×9 ft boxes filled to the brim with goods. Knick knacks, bathing suits, decor, shoes — they have it all. The market is sectioned off into different departments, but we had a hard time navigating between them. We’d walk through the cramped alley way of T-shirt stalls and pop out into an expansion of stalls selling home goods. There’s nothing you couldn’t buy here — and Moritz, Birgit, and I ended up picking up a few quality made shirts, cheap Thai food with a feisty hostess who told a rambunctious group of Spaniards to shut the hell up, and mochi– all for less than half of what we’d pay at home.

We entered a megamall of electronics at the Pantip Plaza. Six stories of shops offering phones, laptops, cameras, lenses, and endless other electronic goods packed the entire building. LED lights flashed from every corner, distracting and blinding us, deterring us from making any spontaneous purchases. I was set on getting a camera bag but all of the options overwhlemed me and I left with nothing but a feeling of shell-shock and a desire to backup my laptop. When we ventured four stories up to the phone section, three young monks dressed in their orange robes browsed the iPhone section and chatted softly with a very beautiful shopkeeper. Our hotel was adjacent to Siam Square, where luxury shops filed neatly into the most modern and chic mall I’ve ever seen. Bar after bar stood in front of the shops, with each having it’s own live band.

Bangkok’s reputation of being the shopping capitol of the world is rightly deserved.

The king, Rama IX, is everywhere in Bangkok. From faded pictures hung over doorways, to bumper stickers bearing his likeness, to his face plastered even on top of fire extinguishers — the king is ever present and loved widely. He’s Thailand’s longest reigning king, has an affinity for playing the saxophone, photography, and even wrote a novel about his dog. Even on paper, this king sounds like the quintessential likeable guy. Artistic, interesting, lover of dogs. Someone who’d order a chocolate milkshake in the place of a detailed coffee.

Freedom of the press is not a right attributed to the Thai media, for talking badly of the king can earn the journalist and publication a serious jail sentence. The king has been the unlit wick of revolution between the highly gapped rich and poor classes, and with his deteriorating health condition, it’s likely that the classes won’t be kept at bay for much longer. The perfect Thai dish includes savory, sweet, salty, and spicy — and it’s uncanny how much Bangkok is akin to a a delicious serving of Pad Thai. It is not the right city to explore in two days, but any longer than a week would be overwhelming. There is simply so much to see, experience, eat, abhor, and love that my short time there was not enough.

Transportation: Always ask the driver to turn the meter on unless you want to pay double or more. A taxi from the airport to the city is about 200-300 baht.

Sleep: Hua Chang Hotel is a high-end boutique hotel next to Siam Square with all white rooms with a splash of tasteful glitter.