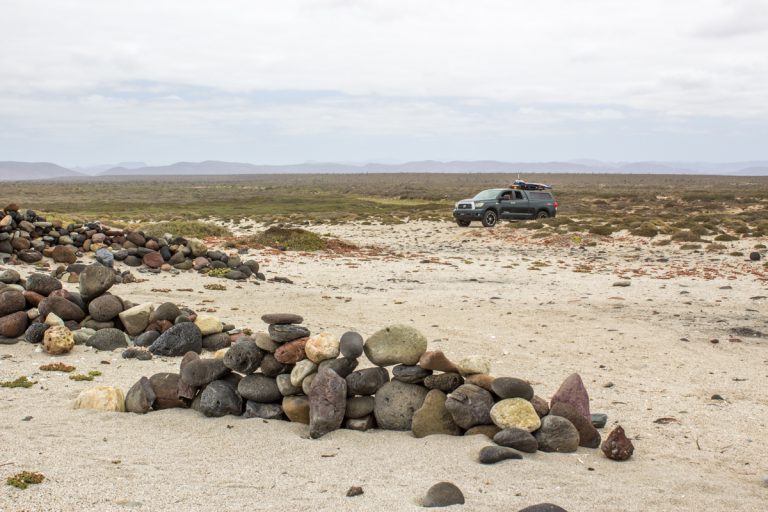 To survive the drive down the Baja Peninsula of Mexico, you need to go prepared. The desert is an unrelenting landscape and one mishap off the main road could leave you stranded without food and water. 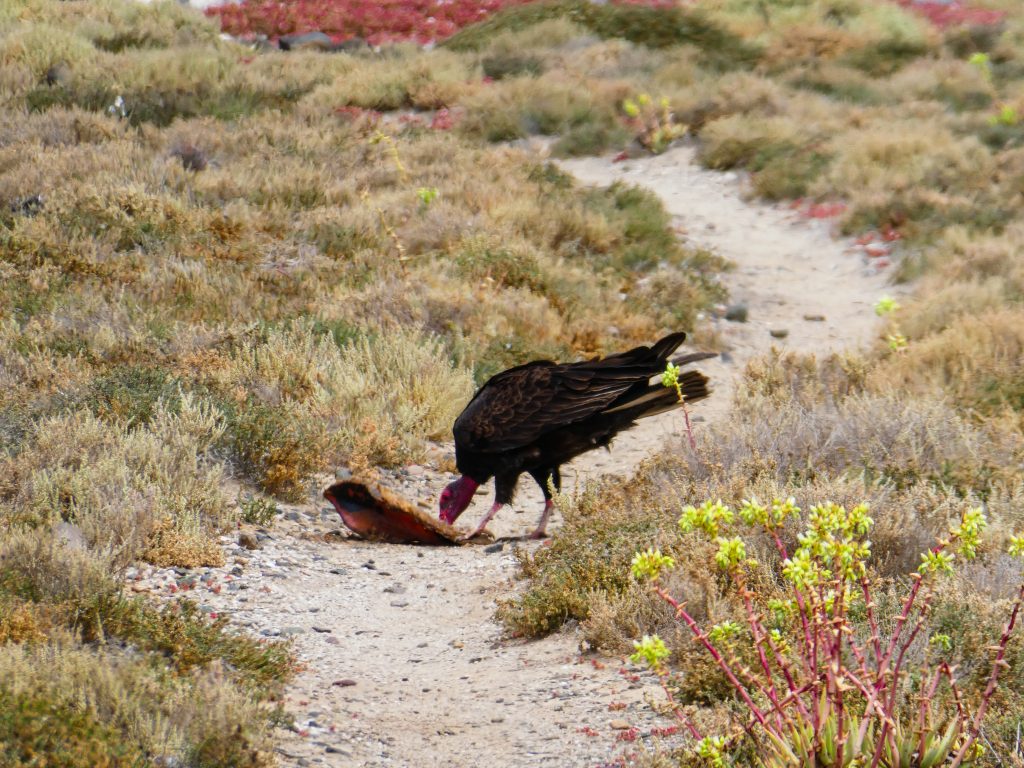 We packed the essentials like water, extra fuel, family sized containers of peanut butter, tents, bedding, our patience, and crammed any extra space around the necessities with toys like a dingy (“Delphinus”), surfboards, and freediving fins.

It was a toss up between crossing into Mexico through the Tecate Border or the Tijuana Border as we drove down San Diego.

Tijuana Border tends to be a melee of cars and border patrol agents, constantly backed up with people walking along the freeway selling Tajin-dusted fruit and cheap plastic trinkets. Meanwhile, the border at Tecate is a low-key entrance of just a handful of agents who don’t ask much except “what’s in here?” as they point to various bags.

My boyfriend, friend, and I planned to drive from San Diego, California to Cabo San Lucas, Mexico over the course of six days. It’d be rushed, but we figured it was worth it for the waves and experiencing untouched Baja, a side of Mexico unseen by the raucous tourists who plant their sun-scorched bodies on a beach in Cabo with a blunt in one hand and a beer in the other.

At one of our first military checkpoints, the soldiers asked us to step out of our vehicle, so they could search inside. I asked one of the soldiers if I could take a picture of him. He shook his head no and the other soldiers made eye contact with one another, uneasy.

The soldier told me that if one of the cartel members saw his picture on social media, it could put him and his entire family at risk.

Like I said in my guide to driving in Baja, Mexico’s drug trafficking situation is not just sensational fodder that Netflix shows are made of. There have been over 160,000 civilian deaths as a result of Mexico’s drug war in the past ten years. This includes journalists, police officers, tourists, and innocent bystanders. Visitors to Mexico are often stuck between two competing messages from the media. TripAdvisor and the tourism board will tell you, “There’s nothing to see here, folks!” while pop culture dispels an image of nonstop violence between diamond-studded drug lords.

Before my trip, I’d asked my friend — a Baja regular — if we’d be safe on the drive. Should I bring my laptop? My camera gear? Will my breasts be turned into cocaine piñatas? My ignorant American was showing, and I felt embarrassed not knowing what the reality in Mexico looked like.

“Who’s out there to bother you? Who’s going to rob you? It’s so remote, you’ll be relieved to even see someone.” He answered.

We drove past towns made of citrus-colored concrete until we hit a mountain pass. Yellow signs warning us of dangerous wind gusts were posted at the entrance of the incline. We weaved up the mountain, peaked, and drove down until we saw a semi-truck tipped over on its side, teetering on the edge. It looked like the driver made it out safely, though he was just feet away from tumbling to his death. 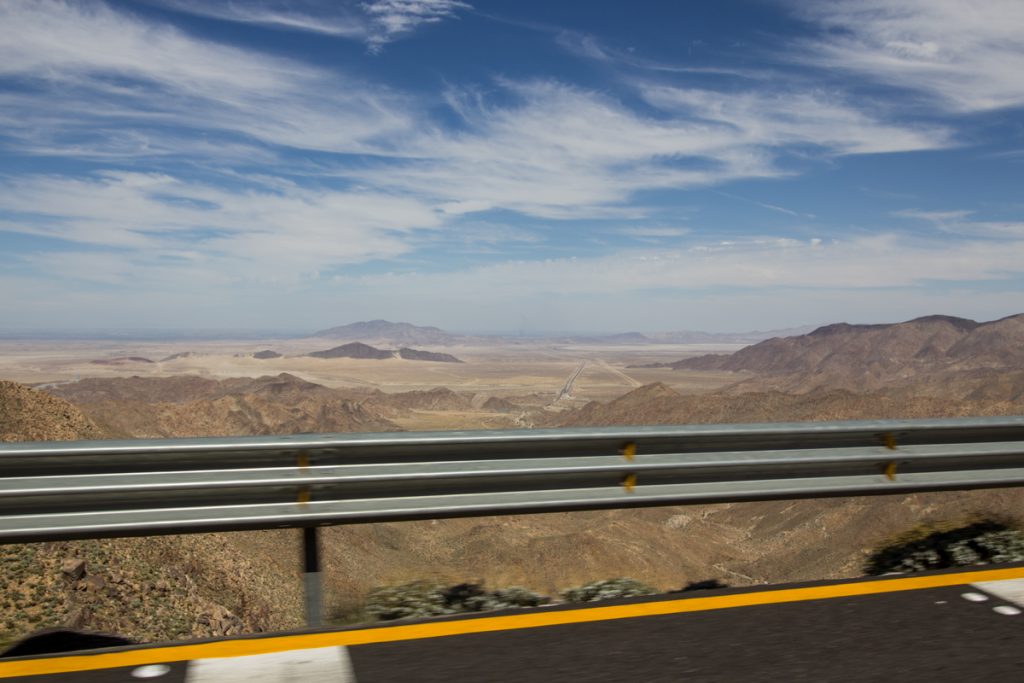 Like my guide told me at Mount Rinjani, if you fall over, “The lights go out.”

I felt uneasy for the rest of the days’ drive, and the tension didn’t relent once night came (don’t drive at night, by the way) and we started our journey into the middle of the peninsula via a dirt road.

“There’s a man named Coco. He has no legs and he sells beer to the truck drivers that come through.” My friend explained. “If we see his shop, we’re going in the right direction.”

I never thought the right direction would be towards a man living on his lonesome out in this rough terrain with the occasional buzzed truck driver as company. To many that venture to Baja, Coco is a wise, father figure. We had the misfortune of only seeing his notorious stop at night, after it closed. Coco was likely fast asleep. Apparently, people describe Coco’s during daylight hours as being like the cantina scene in Star Wars.

Shadows of the saguaro cacti leered over our windows and rabbits jumped across the road. I felt as though the cacti had eyes and were listening to our in-car conversations. It was eerie, and I wondered how much I trusted my friend’s driving abilities and the safety of our SUV. When’s the last time this thing got serviced? 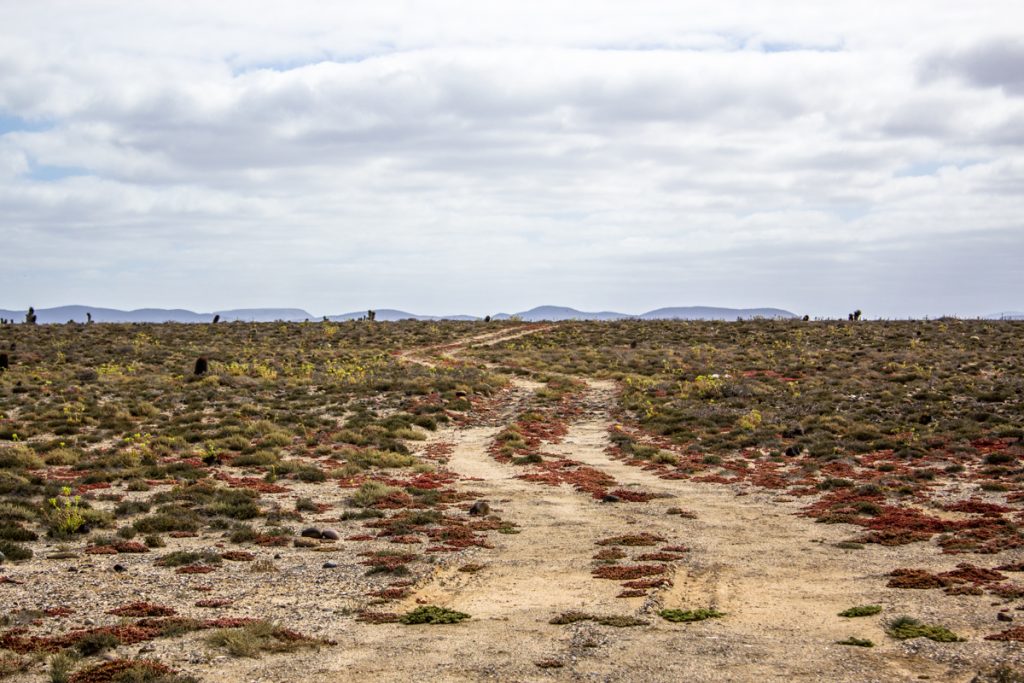 Finally, we came across COCO’S CORNER – a large sign strung together by reflective beer cans. Coco was nowhere to be seen so we continued driving in the dark until we reached paved road again. When our SUV thumped over something, making a loud thud, I looked out the window to check that we hadn’t hit Coco.

Camping and surfing in Baja has a strong cloak of secrecy around it. While the Sea of Cortez campsites are open to whoever, the sites on the Pacific side – where there could be waves – are kept under wraps. Baja, Mexico is hosts the Seven Sisters, seven perfect waves that stretch from Punta Cono to Punta Rosarito. Some sisters are popular while others are protected from the crowds thanks to a culture of secrecy and unmarked roads.

My friend opened a Google earth screenshot of the turn-off to the campsite where we’d be staying for the night and compared it to a live view.

We scanned the road. One of the telephone poles was slightly different than the others.

“This has to be the turn-off,” We mused.

Insecure but committed, we turned the SUV onto the dirt road drove until we hit the ocean’s edge. Without any nearby cities to pollute the sky with light, we could see clearly into the Milky Way.

While I set up a tent behind a pile of rocks as wind shelter, James cooked a hearty meal of macaroni and cheese. The wind whipped through the campsite, chilling me. I considered skipping dinner and crawling straight into bed. 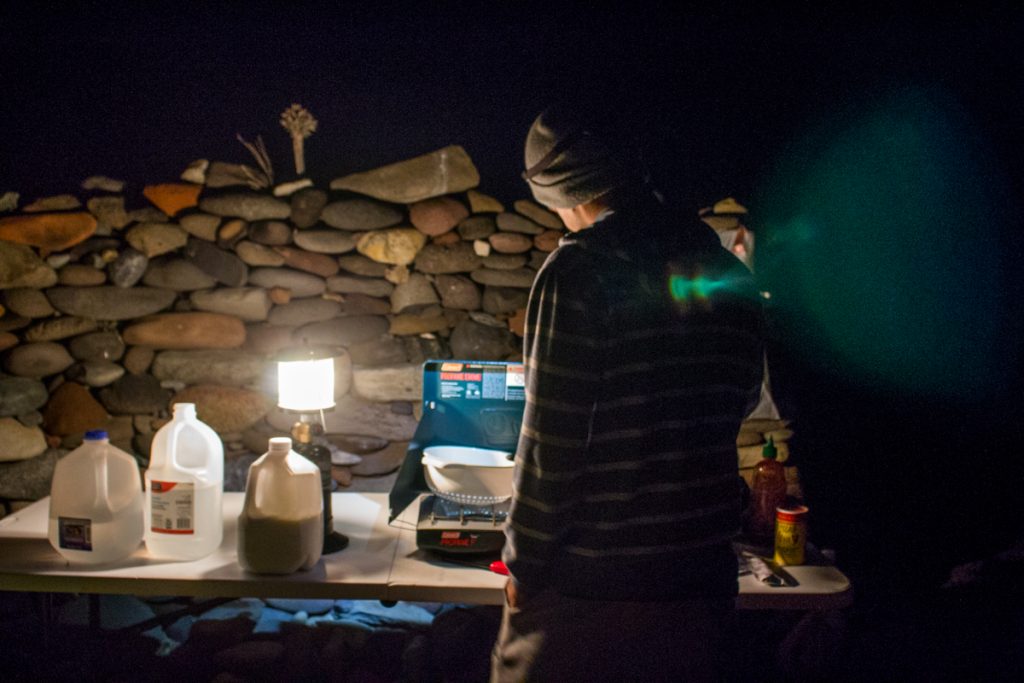 The desert doesn’t care whether you’re prepared for its conditions or not. It will burn you, freeze you, and bleach your bones if you perish. But when you’re in good company, it can feel like you’ll be alright no matter what happens. 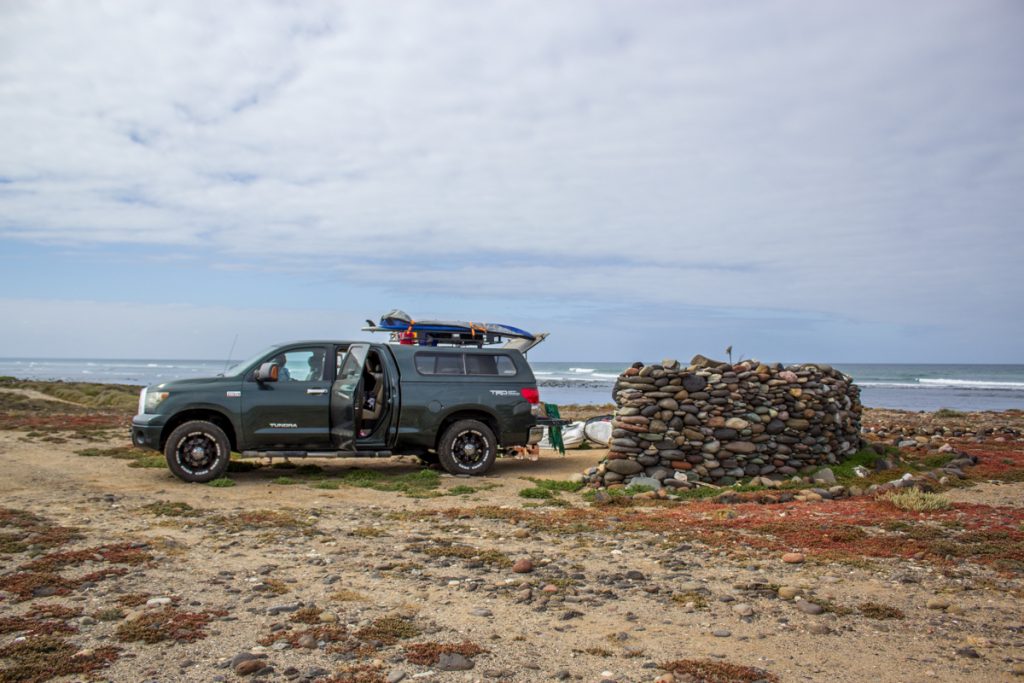 Mosaics made from the dolphin skeletons and painted rocks decorated the campsite. In between these works of art were messages reminding us to, “Burn your toilet paper!” “Pack out your trash!” and “Use a shovel!” 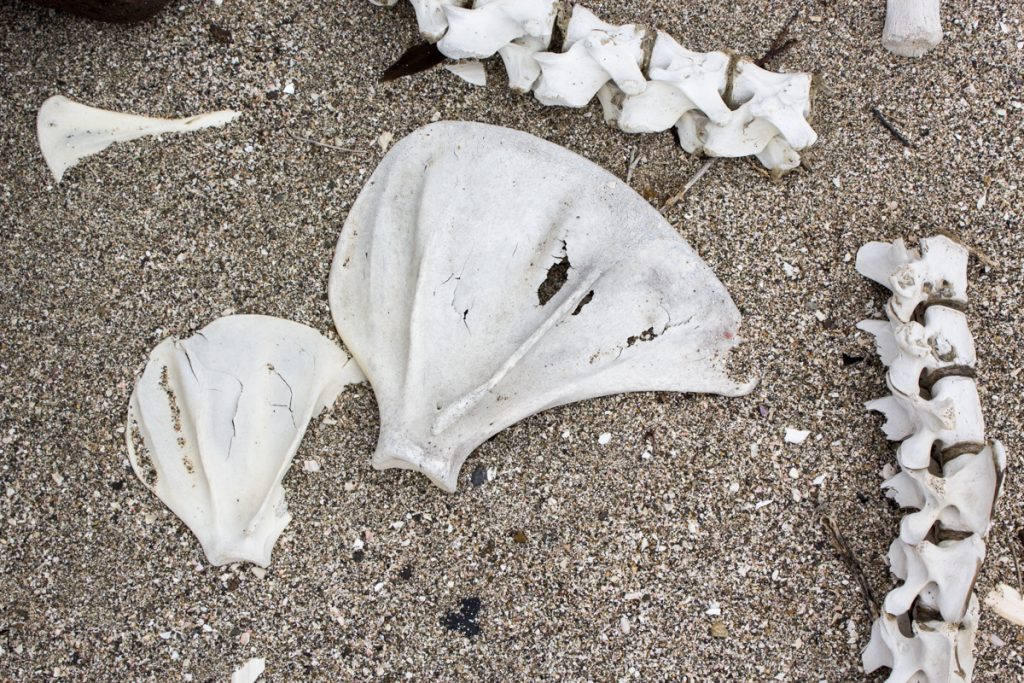 These helpful reminders seemed to work. The only signs of human presence were the rock walls, mosaics, painted rocks, and paths. Compare this to the average campsite that has trash bins clustered every few feet and crushed beer cans in the bushes. Unfortunately, we didn’t score any waves, so our stop here would be a quick one. 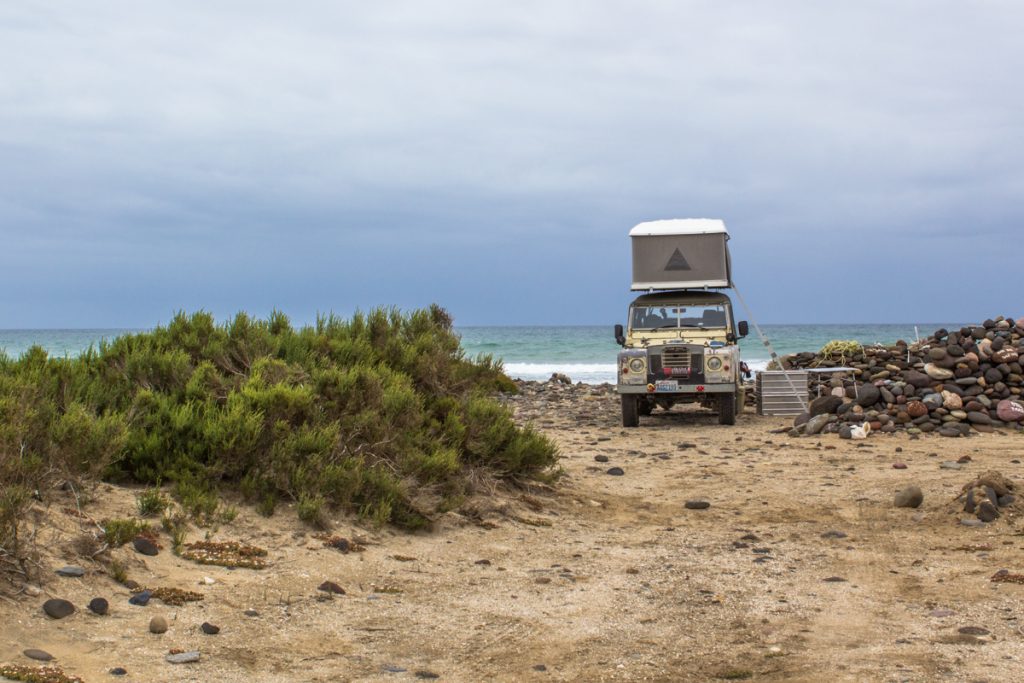 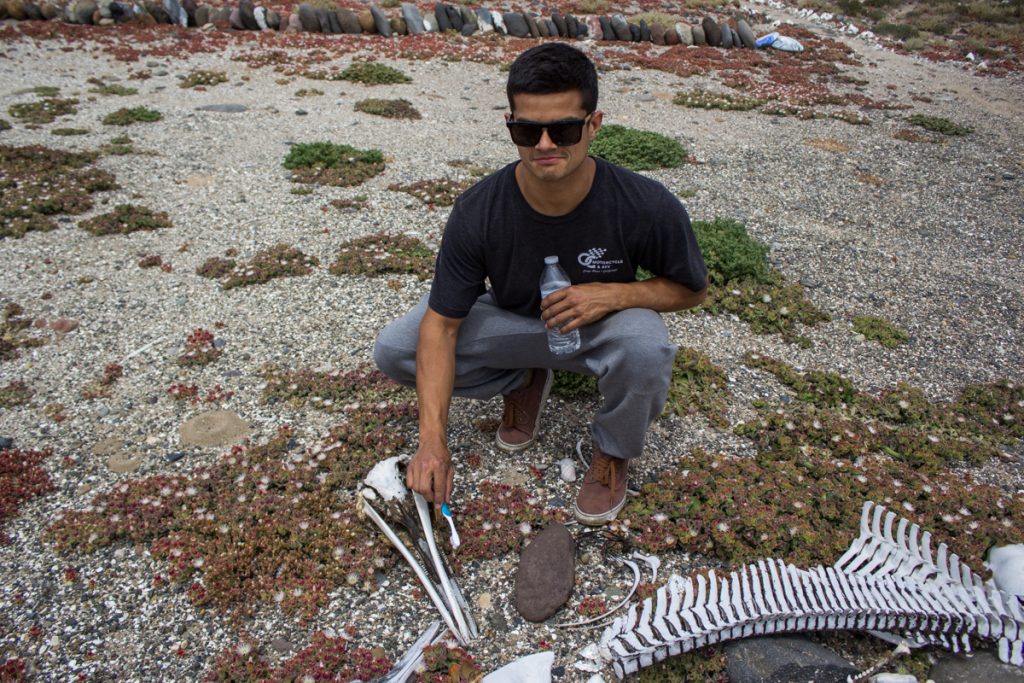 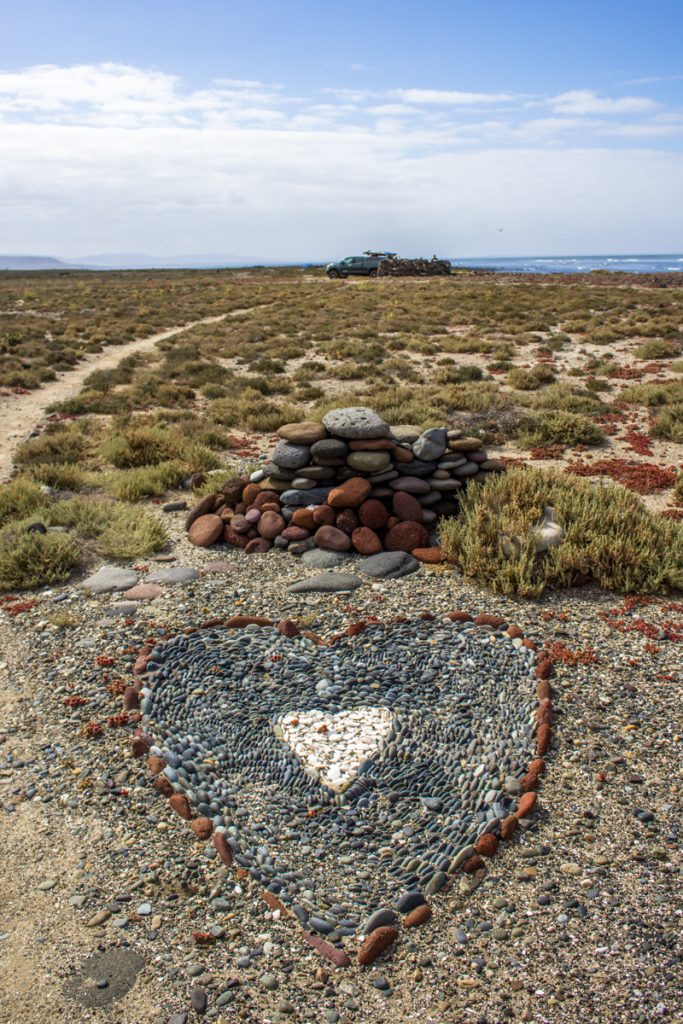 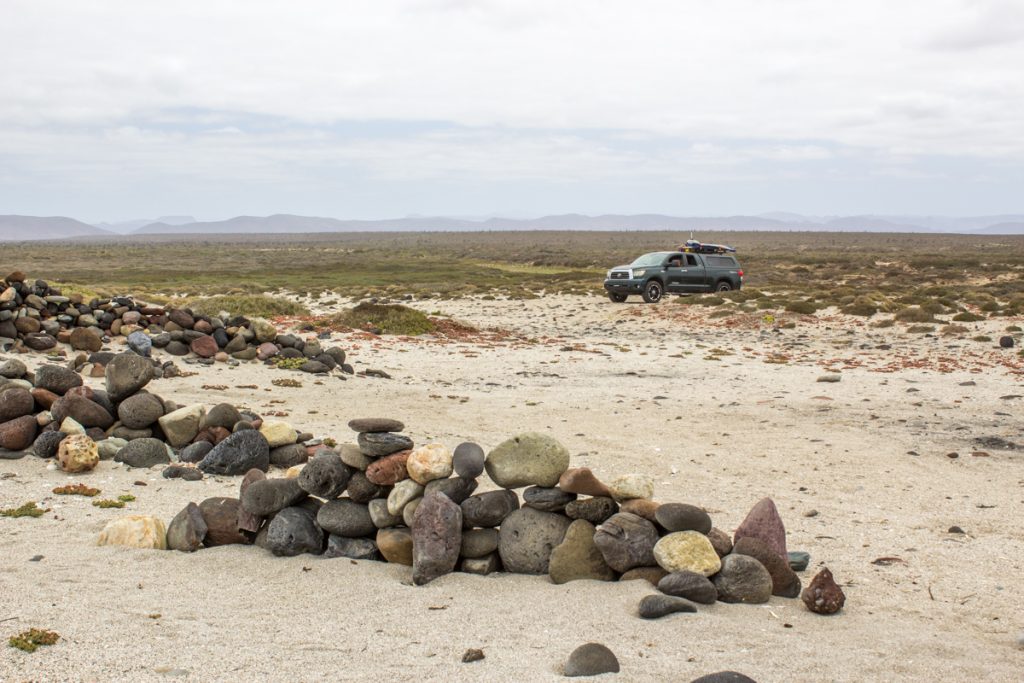 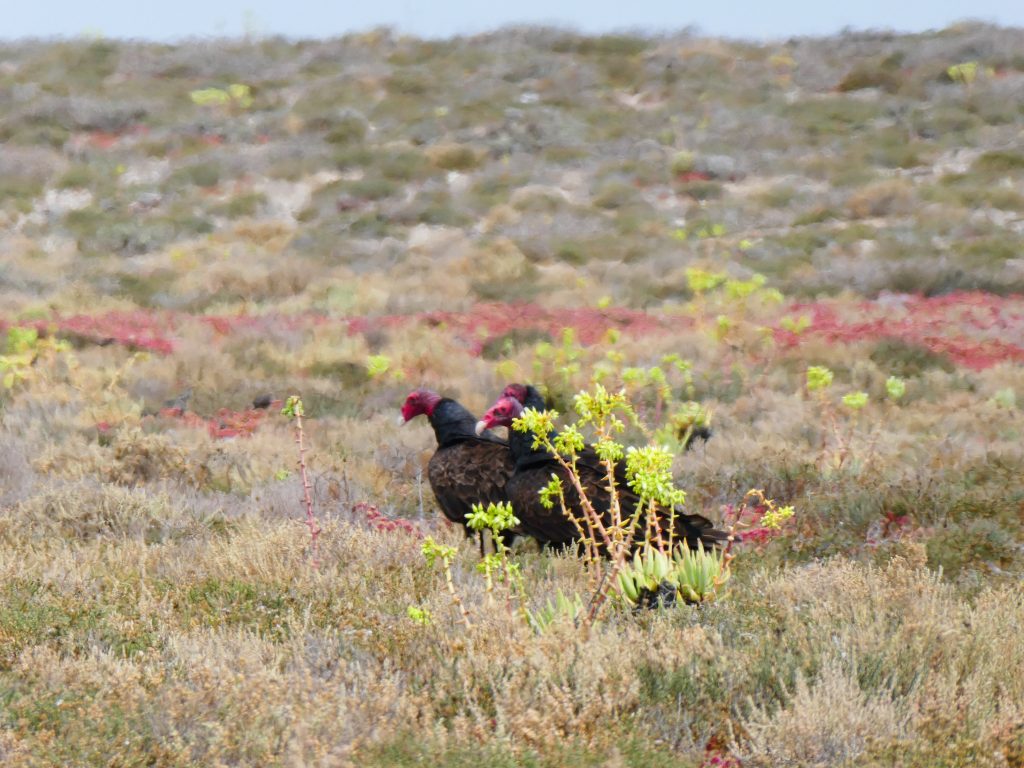 Nearly everyone who comes to Baja starts their journey with a strong sense of curiosity and a healthy dose of self-preservation. The dust, the sun, the endless roads, start to appease your craving for adventure even after one day. 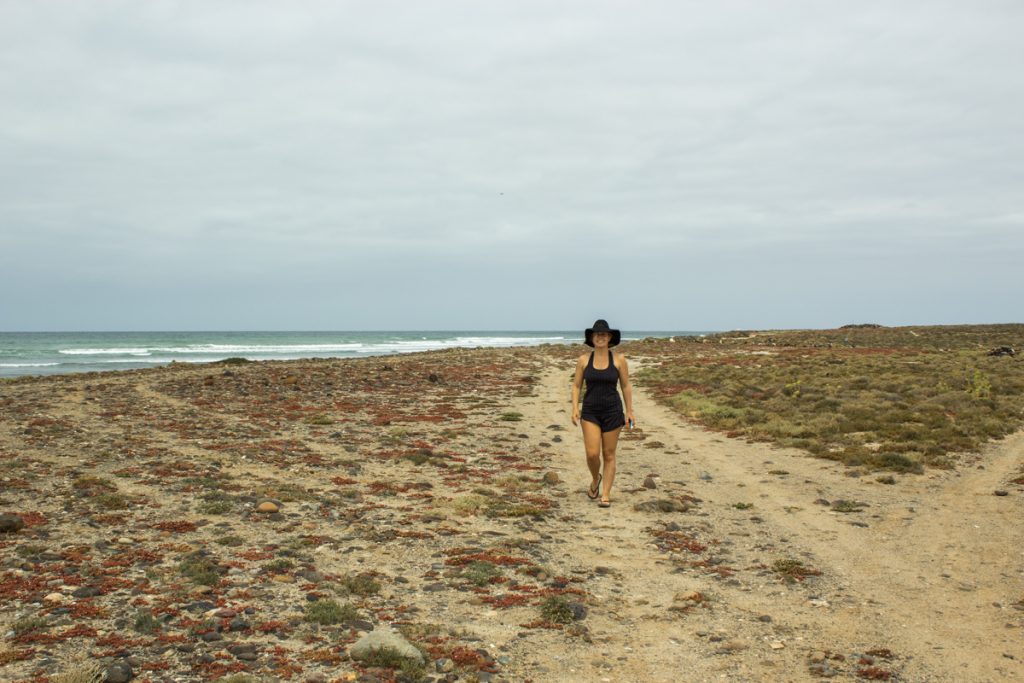