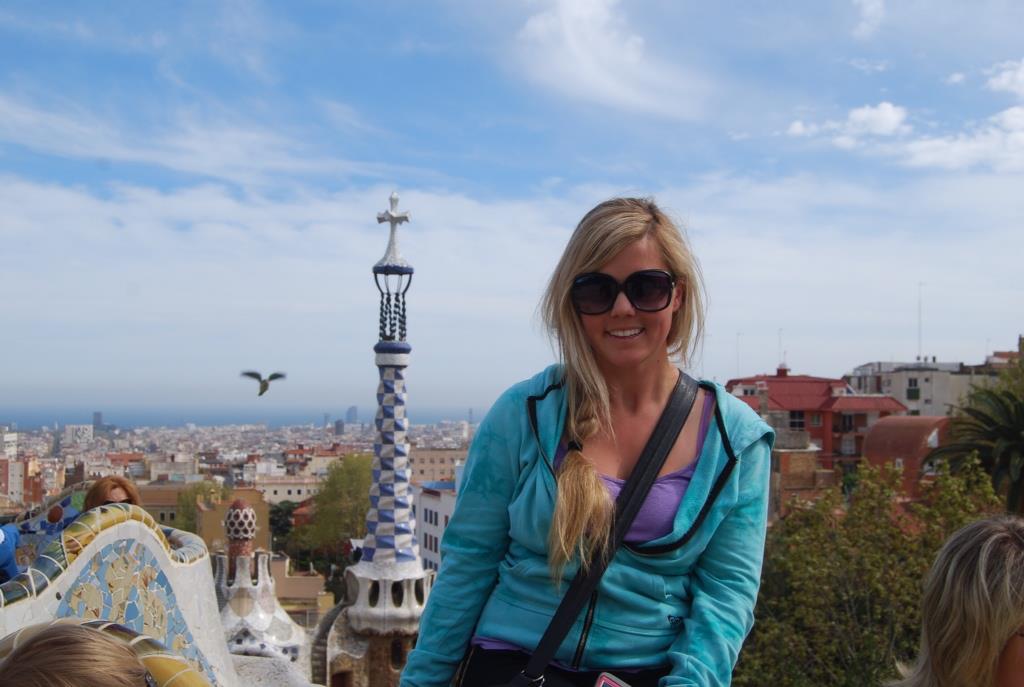 Taken during my happier Barcelona days

By day four of my time in Barcelona, a place I previously declared admiration for, only one thought blared in my mind: Get me the hell out of this city.

As I got off of my plane that took me from Perth, Australia to Doha, Qatar and then finally to Barcelona, Spain. I walked through the sun struck streets filled with excitement and butterflies. It was good to be back.

This isn’t my first time traveling alone. I backpacked through some parts of Central America mostly solo a few years before. I felt well equipped and ready to exercise my travel legs after two relaxing months in Australia.

Moritz and I had a busy week before I left for Europe, we had just gotten back from Melbourne and I spent the next day making heaps of cupcakes for his birthday. We only had a pan that cooked 6 at a time, and he turned 25… which means I had to make an extra batch for number 25! Not to mention all of the laundry… Anyways, I flew into Barcelona completely unprepared in regards to accommodation and even my travel route remained unplanned.

I walked to a quickly google discovered hostel and was confronted with no-vacancy. I looked up another, and my intuition screamed DO NOT STAY HERE, leaving me to walk with backpack in tow to my third attempt at finding shelter, Bon Moustache Hostel. Which I immediately felt at peace with and would recommend it to anyone.

The hostel is relatively new and does not get booked up as fast as the more popular hostels, which meant I would share the twelve bed dorm room with just one other person. Score!

Jetlagged and ready to sleep early, I settled in for summer evening. However, multiple times during the night, my roommate locked himself out — and would bang on the door until I let him in. I didn’t get feverishly annoyed until he brought a lady of the night back into our room which leads me to my next thought – the only criticism I have with this hostel is it’s lack of security. For emergencies, you were told to call a number taped to the reception desk. For most travelers without phone service, this would be an issue.

The next day, I hunted for a SIM card and my luck seemed to follow the same pattern as the day before. No viable SIM card, the place that was supposed to be a phone store was a candy kiosk and even showed this on google maps, and my acquired SIM card was somewhat faulty. It took up half of my day, but I recovered while relaxing at the beach — a strong cure for any stroke of bad luck.

Then, a bird popped on my head. Which is supposed to be good luck! But oh, no…

Then, I was overcharged, ignored, and lied to by my next accommodation, Sun & Moon Hostel (PS please do not stay here!).

Then, I was robbed.

After feeling like one of the sheep in the tourist herd on Las Ramblas street and at Park Guell, I decided to escape the crowd and go to the gardens near the Olympic Village. Only a few people were napping or playing with their children in the park. I point this out because I was robbed in a place where everybody can see everything, and it would be seemingly easy to notice if somebody came up.

I turned on my phone, kept my purse close, and my camera within a fingertip’s reach. A few minutes after hanging up a thirty minute Skype call, my heart sank. My camera was gone.

Somebody came by and stole it without me noticing. Apparently this is how most Barcelona pickpockets work — they are Jedi ninjas of thievery!

I am the type of person who cries very easily. I’ve cried over “Say Yes to the Dress,” commercials with no sad meaning, and sometimes even on my birthday. However, I was in too angry to shed a tear over my beloved camera.

I scouted the park at least five times looking to see anyone with a Nikon strap peeking out of their purse or jacket, but no avail. My memory jogged back to a suspicious looking man in a black and gold jacket looking extremely out-of-place and a group of beggars who had asked me to sign a petition. Both instances had alerted my sketch-radar, but I quickly forgot about them.

I felt completely violated. Over two thousand pictures documenting my past months in Europe and Australia were on the small SD card tucked inside. Thankfully, I backed up my pictures onto my iPad on my plane ride to Europe and hadn’t taken more than a hundred or so new ones. Still, I abhorred the fact that a stranger could find out about my life so easily (I guess all my blog readers fall under this category — this is different, you are not evil strangers like the thief!).

My budget didn’t allow for a camera that could replace the one I brought, and I found the same model selling on segundamano (Spain’s version of Craigslist – minus the desperate personal ads) for upwards of 350 euro.

My other camera was broken and took mediocre quality pictures at best. I felt stumped – spend money I didn’t have on a camera or risk my shoddy one breaking down in even more expensive Switzerland. My camera bag, charger, and accessories stared back at me from my backpack like the ghost of my camera’s past.

Luckily my mood was picked up thanks to the consoling smile and happy personality of one of my best friends (and old roommate), who took a job nearby as an au pair. We laughed my misfortune away and went out for the night as the silver lining to my horrible week.

I realize that my situation could have been a lot worse. It could have been my entire purse, my passport, un-backed up pictures, or I could have been assaulted. While being upset over having a camera stolen may seem petty or spoiled, it is accompanied with feelings of violation and stupidity. I did not want to be just another person who was robbed in Barcelona, because sadly, it seems like most people will get robbed there at some point. Everyone who has been to Barcelona for some time has a story. Somehow I’ve managed to live in South Central Los Angeles for four years without any event, but Barcelona got me within two weeks.