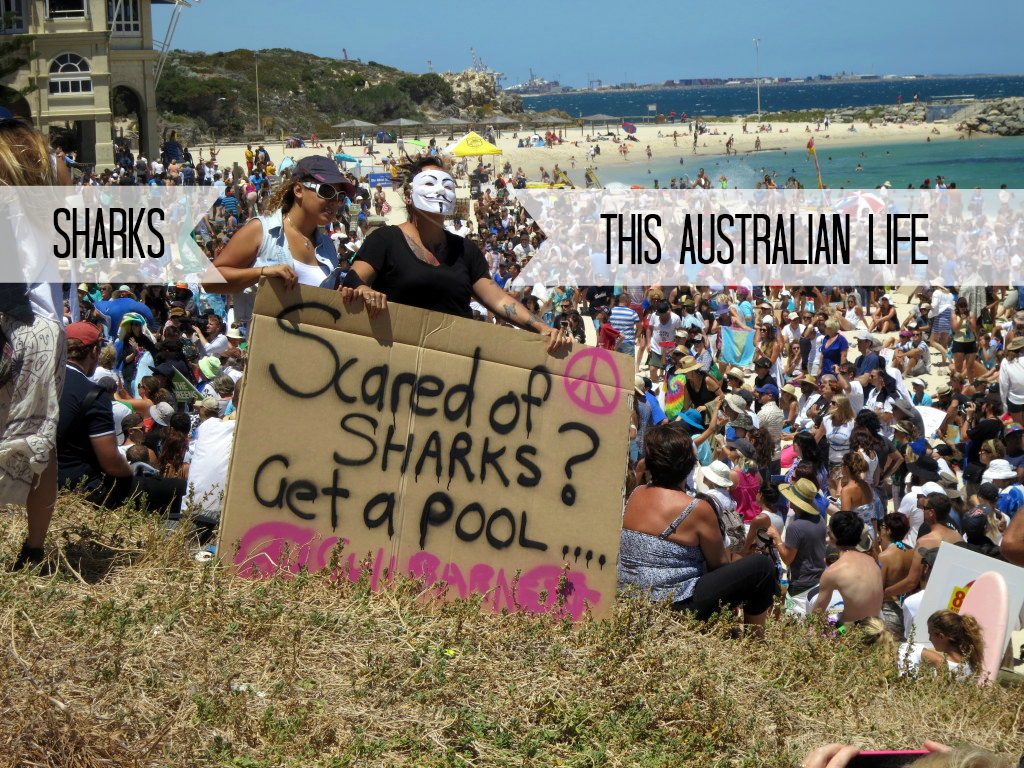 It’s a bright, sunny, idyllic day at the beach. The type of day you imagine that the Coppertone girl is about to have. You’ve just paddled out into the water on your surfboard and you’re waiting for a small but clean wave to roll through.

First you see the shark patrolling helicopter putter over the ocean making it’s calculated and thorough sweep. It does this all hours of a hot day, every day… so you pay no attention to it. That is, until you notice that it’s going slightly slower than usual, and is starting to circle an area just a few hundred meters beside you.

Then you hear it. An alarm so loud that it ricochets between your ears, blaring from a few points on the beach as well as the helicopter itself. That alarm only means one thing: Get out of the water because there’s a shark.

In the video above, you can see the vantage point of the helicopter flying over Yanchep (one of my favorite surf breaks!) as it spots a shark.

If we’re being honest, I was scared the first few times this happened to me. And if we’re being really honest, it still scares me. On one occasion, Moritz stayed in the water just a few minutes longer than the rest of us after the alarm sounded. Thirty seconds after he decided to paddle in, a shark chasing a sickly humpback whale passed by the exact spot where Moritz had been just a few moments earlier. We followed the shark trailing between the whale from the comforts of shore, able watch the hunt take place with our own eyes.

The conversation about what has been deemed “the shark problem” is a dialogue that takes place between Western Australian residents on a constant basis. People tend to fall passionately on one side of the spectrum between those who have adopted the theory ‘kill or be killed,’ and those who believe sharks have a right to exist peacefully where they belong.

Just last week, we were at an off-the-grid beach where Moritz was teaching his friend how to surf. An hour after of being in the water, a park ranger came to the shore and placed her hand vertically on top of her head – Shark.

Later we learned that a shark bit and popped an inflatable kayak just a short distance away from where we were, causing the two men inside of it to hurriedly paddle to shore before it fully deflated.

Moritz and a few of our friends were circled by a four meter great white while scuba diving off of the coastline, and they’ll never forget how the shark’s eyes moved slowly from one person to the next. The shark was curious, forcing each diver in the group to ascend one by one as quickly as possible.

These are just the anecdotes closest to me. What I haven’t mentioned are the crosses commemorating attack victims that dot beaches I love, reports in the local media, tales told by numerous friends who had even more horrifying encounters, and worse – friends who have been personally affected when they lost a loved one from a shark.

The stories that are simply not told because they aren’t as exciting include the countless experiences people have had surfing, diving, and swimming with sharks completely peacefully. On Australia Day last year, thousands of people spent the entire day splashing around in Sydney’s harbor – a place where large, male, bull sharks dominate. They tracked seven testosterone-loaded male bull sharks swimming underneath and in between people throughout the whole day, and not a single incident occurred. Keep in mind, those were just the sharks that were tagged. Again, we have to wonder – just how realistic is this fear?  Do shark attacks just make a better story than someone dying from a car accident or poor diet? Is anyone really interested in how many times I’ve gone in and out of the water unscathed?

238 Australians drowned in 2013 compared to two Australian deaths from shark attacks… and yet there isn’t nearly the same push for better water safety and rescue programs.

E.O. Wilson, a sociobiologist, words our fear of being hunted perfectly,

“We’re not just afraid of predators. We’re transfixed by them, prone to weave stories and fables and chatter endlessly about them, because fascination creates preparedness, and preparedness, survival. In a deeply tribal sense, we love our monsters.”

The government has some great policies on how to deal with the sharks such as monitoring through a tagging system where marked sharks sound an alarm when they pass through popular swimming and surfing zones, and using helicopter patrol.

Sadly, the government has also had some knee-jerk reactions to the shark attacks in WA, where hundreds of sharks were baited and culled inhumanely.

Lest we forget the role that sharks play for the health of our oceans – they are essential for biodiversity and control the populations of smaller species. Since they are migratory, any culling done here sets off a chain reaction.

In the end, we have to make a choice of whether you can coexist in the water with these great animals or not.  As the Balinese believe, when it’s time to go, it’s time to go. The fact is that you are more likely to be killed driving to the beach or by another human than by a shark. I wanted to say that every time you step out of your home, you’re at risk for something to happen to you – until I remembered that people die on their toilets and in bed all the time. So basically, nowhere is completely safe if that makes you feel any better.

If your fear is so great that you feel you want the sharks to be culled, then realize that you can avoid encountering them by staying out of the ocean. That is the end-all fact. Or, as the right-wing Americans like to say, “Like it or leave it.” … And if you think this is fanatical, wait until you meet some of the other Australians here. The people who wear shirts printed with,“Say it Loud! Say it Clear! GREAT WHITE SHARKS ARE WELCOME HERE!” When I see these people, I think, Woah now. Hold up. Let’s not get carried away. They are not welcome, they just shouldn’t get killed for coming and being themselves… like your drunk uncle at Christmas dinner. The day after a fatal attack occurred in Margaret River, Moritz and I packed our car for a surf trip down there that we’d planned before we heard the news. Maybe a “sudden illness” would set in the second we arrived, or maybe I’d cop up to being afraid and spend my time on the shoreline. When we finally arrived, my thoughts bounced around like marbles being shaken inside of a shoebox. At every break we came across, I began exhibiting Goldilocks syndrome: the waves are too big, the waves are too small, it’s too crowded, there’s nobody here… and the increased helicopter patrolling unnerved me. I was marinating in shark paranoia. Eventually, I agreed to surf at a friendly wave located on a small rogue reef. The water was so clear, I could sit in the middle of the dark patch and perpetually scan for anything that swam in or out of it. Eventually, as you’d expect, I grew bored of ruminating and made my final decision. I would try to let go of negative thoughts, and enjoy being in the moment. I’ll never have the control that I want over Fast forward six months, and the spot where the man sadly passed away is one that has provided me with great memories. One day, a pod of dolphins swam under my board so close that I could touch them if I wanted. When I put my head underwater, I could hear them clicking. One of my best waves was caught on a rainy day there. (Moritz will probably want to point out that I also dinged my board not once but twice at this spot) … Those experiences would have never happened had I stayed fearful. It begs the question, what has fear made me miss out on?

Ultimately, when you love something then you have to love it for what it is. So still I choose to head into the water, even if Jaws is there too.