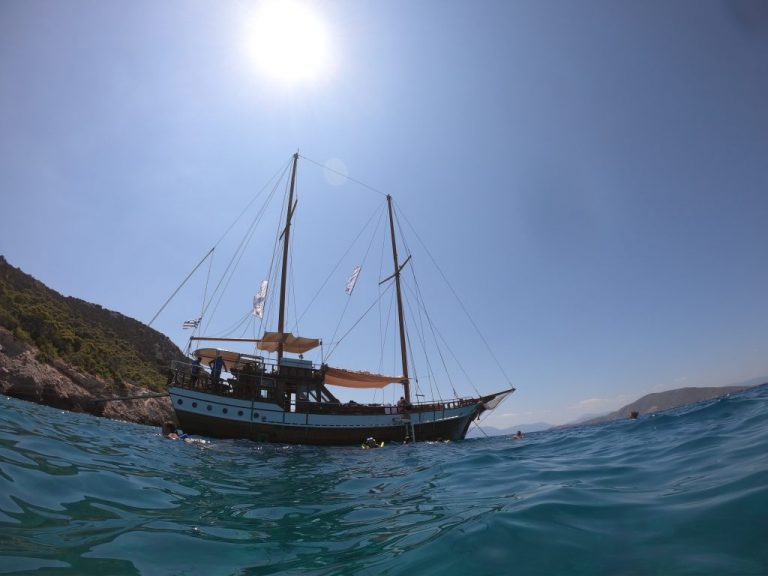 Short on time but hoping to experience part of the Greek Yacht Week I seen graced across travel media, Mo and I booked a one day cruise that departed from Athens. Maybe it wouldn’t be a boisterous or booze-laden experience, but surely it’d be the next best thing?

Online, I found a tip that told us to board the boat early and claim seats under the shade up front. Like elsewhere in Europe, people tend to be a bit territorial when it comes to perching on a plush towel. I whipped to the front of the sailboat and marked our territory with our backpacks before circling back to the snack table.

Prime location secured, I could tell that this would be an epic day sailing around the Saronic Islands.

The first stop on the all day cruise, the island of Agistri. Agristi is a tiny island with white sand and limestone beaches. We climbed off of the ship and made our way to a small bicycle stand, each grabbing a set of two wheels for an excursion to a secluded beach.

The sun kissed our faces and we buzzed past umbrellas that dotted the shoreline–though most beach goers seemed to opt for the sunshine. We sped past the Church of Agioi Anargyroi to Skala, a seaside town where kids cannonballed into the shallow, sand bottom sea.

Up a hill and through a narrow cobblestone neighborhood, we led to a grotto with an opening into the ocean. The tour guide motioned us to lean our bikes against a wall and follow him down the steps. A cool swim was just the respite we needed after a bike trip in the heat.

On the way back, Mo’s bike chain came loose and we fell behind the pack. No matter, it seemed like even Greece runs on island time and after a few minutes, we were speeding to catch up to the group.

Next stop, Moni. This little island has a jagged coastline that’s a stark contrast from its sand beached hospitable neighbors.

The boat anchored on its shoreline and we switched between snorkeling, back flipping off of the deck, and eating heaped portions of Greek salad made with the reddest, plumpest tomatoes I’d ever seen. And if there’s one thing for certain, it’s that the Greeks don’t skimp out when it comes to feta.

Aegina, the most popular Sarconic Island of the lot, was our last stop. This little island is famous for its pistachios. Here, you can sample pistachios as a solid, liquid, and (probably) gas. Pistachio butters, ice cream, brittle, oil. You name it, the pistachio connoisseurs of Aegina have concocted it.

We explored an ancient ruin that overlooked a sweeping bay, the sea twinkling with the setting sun. A little museum with ancient Greek artifacts welcomed us, its modest exhibits dating back hundreds of years.

Finally, it was time to bid adieu to the three islands of Agistri, Moni, and Aegina. Athens awaited us for dinner.