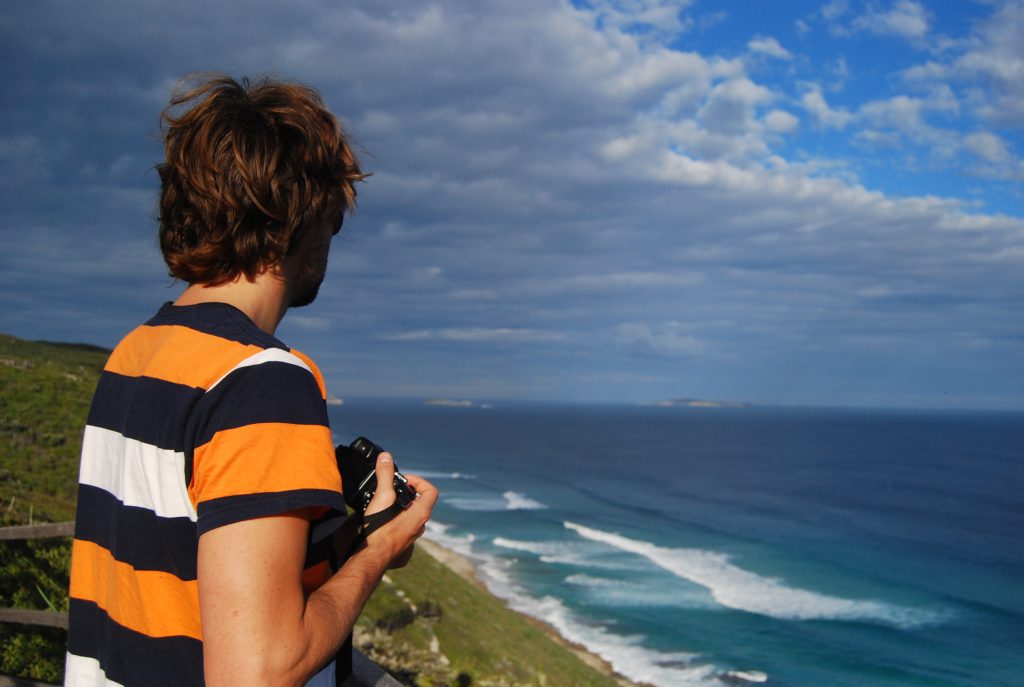 Stalking him with my camera

Albany: Where You Live Happy & Free

I’ve been in Western Australia for the past month, and It’s perfect for antisocial nature-lovers. You can wander for hours along the green coastline without seeing anybody — which is precisely what I did this weekend in Albany with Moritz — my funny/oceanographer/surfer/German boyfriend, with a smile like this, needs no introduction.

We departed late in the afternoon on a few hour drive down to Albany. The problem with driving at night is the abundance of kangaroos playing Frogger on the highway at this time. Moritz was squinting at a sign to his right while I stared at the kangaroo about 50 feet away staring blankly back at me. I screamed bloody murder after realizing that Moritz had no idea we were about to make a kangaroo pancake within the next few seconds. He swerved to the right… the kangaroo bounced right… we braked… the kangaroo braked. We basically had one of those awkward interactions people have whenever you try to pass someone on the sidewalk and they keep going the same way you are. “Errrm, ummm, excuse me, pardon me, yes my dear sir… I’ll be this way. Cheerio.” …Except it was life, death, and interspecies awkwardness for us and the terrified kangaroo.

Somehow, we missed the kangaroo by a few inches and all of us went on our merry way.

Did I mention I was holding boiling hot tea during this entire fiasco?

We pulled into Cosy Corner Campground and were greeted by a very drunk Frenchman shining a mag-light into our eyes.

He bombarded us with questions and statements against France — then proceeded to tell us his life story. Apparently, he has been camping at the free campground for over a week and was planning on doing some work at a chicken farm within the next few days. His girlfriend went to bed early and always hogs the air mattress, forcing him to sleep on the floor. Every morning she wakes up and says that she slept fantastically. Every morning he retorts with, “HMMM I WONDER WHY!”

Anyways, it seems that these type of places attract those type of people. Apparently, last time Moritz camped here he met a Zambian man who wanted to discuss how America started WWII and was the sole cause of Hitler’s rise to power… he knows this because he worked at a museum for a year.

Some of the other campers were not so friendly… or maybe they just weren’t smart. One of the groups pulled in a large van during the wee hours of the night. I awoke to the smell of exhaust billowing into the tent — surprising that I even woke up at all? Maybe they had parked by the Frenchman’s tent the nights before, and maybe that’s why his girlfriend slept so well.

Anyways, we went to barbeque our breakfast on the beach (which would become a daily occurrence for the next three days) and it was mighty fine.

We then made our way to Lights Beach and watched some of the waves crash over the rocks.

One of the rocky areas formed a pool where the water entered through one area and left through a loop.

I tried to film a neon orange crab with my GoPro — who promptly pinschered me, causing me to scream and drop the camera into the current.

It seems as though me + screaming + animal confrontations are a common occurrence in Australia.

We wanted to surf in the water at some point, but there was nobody in sight to save us from any shark attacks — which seems impending when you consider the fact that Western Australia was voted the most dangerous spot to surf in the world. Oh, and in the surf guide books, it noted that yes there are great waves here but oh by the way, sharks feed on the hordes of salmon in this spot.

After our day at the beach, we went to barbeque veggie hot dogs before grabbing a drink at one of the nearby local pubs. We got there a bit early and hoped to hear some live music. The pub was divided into three rooms — as soon as the band started, people dispersed into the two rooms that didn’t have live music. Sad… but we were with the pack of non-listeners.

The people at the pub were dressed to the nines while we scruffily sat at a corner table in rat’s nest hair, hoodies, and jeans. It was also around this time that we noticed we started to smell (probably).

The next day, we went to see one of the most beautiful beaches I’ve ever laid eyes on with crystal blue waters and fine white sand.

We climbed over some rocks and found ourselves in a cove all to ourselves… or so we thought. We happily ate, frolicked, jumped off of the rock into the water, splashed, all in our own little world. It wasn’t until the sun was setting that we noticed a mysterious and lumpy form in the shadows…

Moritz picked up his camera and zoomed…

The creepy thing was, we had seen the same man earlier in the day parked next to us in town. Stalker to the extreme. We tried to hike further away and find another area, but the rocks on our escape side were foreboding — not to mention it was getting dark. We were cornered!

Finally, the creepy man left his rocky lair and we went back to the car (where he awaited us in his car).

We went to the supermarket to grab some s’more supplies because Moritz, the poor fellow, had never even heard of a s’more!!!

Except, there were a few obstacles I encountered
1. The marshmallows were pink and shaped like dollops.
2. They don’t have Hershey’s chocolate (I pretended not to hear, “what’s Hershey’s?”)
3. They don’t have graham crackers (Also pretended not to hear, “what’s a graham cracker?”) — Instead they have “digestive biscuits” that somewhat resembled graham crackers. We bought them, but I feared that they were made as a fiber supplement for the geriatric consumer and prayed that neither of us would have to spend the night in the campsite’s unfortunate outhouse… if you can even call it that (but! on the plus side, someone left magazines in the outhouse for the masochist that likes to combine leisure and bathroom time there!!!)
4. FIRES AREN’T ALLOWED ANYWHERE
5. Moritz doesn’t like chocolate, and from the sounds of it, doesn’t think he would ever like a graham cracker either because he’s “not a cracker person.”

So basically we were left with a few sub par shoddy ingredients to make a s’more.

But it didn’t matter anyways, because Moritz ate all the marshmallows before we could even go about making anything that resembled a fire.

So we settled for tasteless and grainy veggie paddies instead for sustenance.

The next morning, we repeated breakfast on the beach but things seemed a bit off.

Since nobody lives on this half of Australia, (the entire state of Western Australia is ten times the six of New Zealand and has 2 million people in it — 1.75 million of those people live in their main city, Perth) we took the relative desertedness as a sign to teach me how to drive stick-shift on a few of the side roads.

I hadn’t driven manual since high school, and was off to a rough start. After a few stalls and one sketchy start, I embarked on the road.

Things were going smoothly until…

“We drive on the left side.”

It was all fun and peachy… just me and the open road for a while until one white car decided to follow closely behind. A little too close, for my liking.

“Ughhhh I hate driving where it’s crowded!” I looked into the mirror and stared angrily at the car who rudely came behind us. We stopped at an intersection, where I of course stalled. The white car patiently waiting for me to start again.

A few more starts and stops (some successful, some… less successful) led us to a HUGE intersection where I stalled in the middle and made Moritz switch with me after envisioning myself driving onto the wrong entrance and/or getting T-Boned by a big rig.

We stopped at a beautiful wooden trail that overlooked the ocean without a person or boat in sight. It’s places like this that make me really love and appreciate the loneliness of Western Australia.

Next, we visited a lookout area that featured the edge of Antarctica! Crazy wowzers.

I have an unhealthy affinity for heights, and proceeded to climb off the path in search of a better view… and teetered on the edge of the cliff, grabbing some amazing views of the powerful water.

A segment on the map said, “blowholes.” I was sold, and off we went to see some blowholes. Unfortunately, the swell was too small to produce any sort of crazy explosion of water like I had envisioned…

So we threw rocks off of the cliff instead.

Our time in Albany was short-lived, but full of beautiful sights and deserted beaches. We said goodbye to all of the uncaught waves and our new friend, the creeper. Who we will probably see again at some point (against our will).