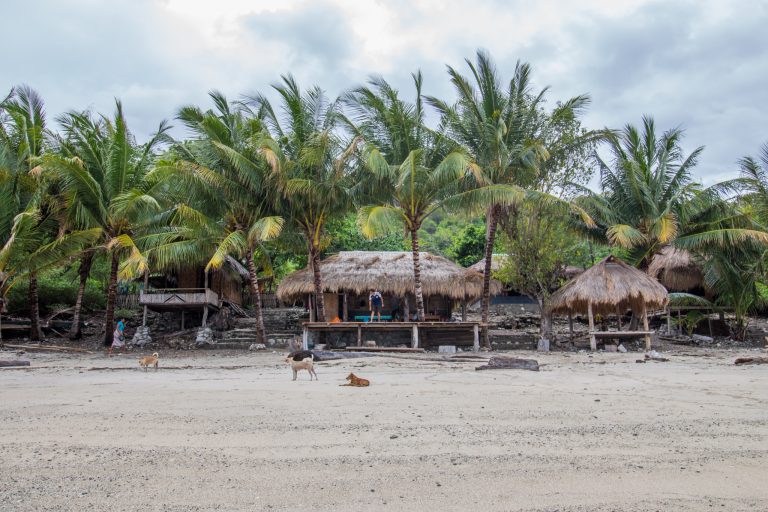 “Are you sure this is a good idea?” My friend asked.

“They’re supposed to be smarter than dogs. She’s domesticated,” I replied.

The pig looked up at my outstretched palm and let out an ear-piercing squeal. She bared her dark yellow teeth and waited for me to drop the popcorn.

Oreo, the pig, charged towards me and tried to nip my ankle. I let out a shrill sound of my own and dropped the popcorn onto the sand.

Mario’s Place is a low-key homestay on Atauro Island, a little island off the coast of East Timor’s mainland. All meals are included in the homestay price, and the local fisherman catch your meal right before it’s served (there’s nowhere else to get your food, anyways). The gang of resident pigs spend their days squealing with enough drama to fuel a Colombian telenovela, bulldozing their noses into the sand in search of crabs, and pillaging our belongings for anything their-version-of-edible (like, say, soap). After a few hours at Mario’s Place, we’d given each pig their own name. You already met the glutton known as Oreo. There was also Lumpy, AJ, Kevin, Lance, and Killer. Oreo was the evil dictator of the pack – only out for herself, which explained why she was at least 50% bigger than the rest of the swine. Atauro is known for having one of the most biologically diverse marine ecosystems in the world. The coral reef is dead at Mario’s Place until it reaches about three to five meters. About twenty meters out, the reef slope drops indefinitely — schools of fish hang around the strong current. Parrotfish, box fish, clown fish, and all other types of coral-loving fish stayed close to the edge. Rain poured, forming surreal textures on the sea’s surface. We didn’t realize it, but we’d swam out during high tide and as we were out, the tide dropped. A stretch of fragile coral and jagged rocks separated us from the land. After the current swept us nearly 500 meters down the shoreline, the group made a collective decision to brave the rocks and swim in. Small waves dumped us onto the rocks – waterboarding us after each breath. Eventually we made it to shore with a few cuts and bruises as souvenirs of our adventure. I don’t usually mind – scars make the best travel tattoos. Nighttime hours were filled with animated charades and hermit crab races. One member of the group manhandled the crustaceans, and I think we were all a little relieved when he’d finally release his latest victim.

One night, I walked into my bedroom and a small snake slithered by. A girl in our group came to my rescue with a stick and chased it out. I thought twice about sleeping with my window open that night and tried to ignore the gecko crap, the snakes, the roaches, and the pig squeals as I closed my eyes for the evening.

Mosquito nets are a godsend.

From Mario’s Place… back to Barry’s

We decided to trek back to Barry’s Place, where the water was a bit calmer for diving. The walk back was much nicer while dry – though there was one only-in-East-Timor incident that went down.

A loud cry boomed from the bottom of a cliff.

“What the hell was that?”

A stray dog grabbed a baby goat and dragged it by its throat. The kid fell off the cliff and started crying out for its mother. One of the legs was obviously broken, and I started to get the feeling that we were extras in a Quentin Tarantino fantasy.

Do we put it out of its misery? WWBGD (What would Bear Grylls do)? I don’t even kill bugs – so sending the kid to heaven was out of the question for me, and the others weren’t up for it either. My stomach churned. We decided to let nature take its course and walked back along the trail until we could catch a ride to Barry’s Place. Once night fell, I heard a rap on my door.

Five of us geared up with our snorkels, fins, and tied glowsticks to our swim suits. It was the perfect night to see what lies underneath the surface of a dark sea. The only problem? We only had three flashlights to illuminate the dive.

Crabs scuttled along the sand, darting out of our way as we walked up the beach. It was eerie to walk into pitch-black, warm water. The busy coral reef was abandoned – only inhabited by sleeping fish and clown fish tucked into their anemones. When I waved my hands through the water, bioluminescent plankton sparkled like the sky above. Night swimming/diving is one of my favorite things to do because you feel like an astronaut – weightless, surrounded by darkness, and floating over foreign terrain.

Those with flashlights tried to light up the path of those without. We saw one another in the dark by keeping an eye out for the tied-up glowsticks.

We spent the rest of our time at Barry’s Place freediving and snorkeling whenever we could. When a fishing boat drove by, we could hear them even at depth. I swam past a puka shell the size of my fist, and saw a conch shell with a furry, red hermit crab tucked inside.

When it came time to boat back to Dili, it took all my self-discipline to get out of the water. I’m a sucker for going back to places I love many times – Atauro Island is sure to be one of them.

My Tiny Adventure Guide to Atauro

Where to stay in Atauro

Barry’s Place: One of my favorite homestays I’ve ever been to, Barry’s Place offers beachside bungalows and delicious homecooked meals for around $35/per person/night.

Mario’s Place (also called Adara Eco-Resort): A little more rugged and remote than Barry’s Place, Mario’s Place is a homestay with beachside thatched-roof shacks. There is more of a camplike vibe here – don’t expect to sleep on a soft (or very clean) mattress. The owner is passionate, chatty, and staying here supports the local community.

Where to get food in Atauro

During my stay, all meals were served and eaten at the homestay. Those who have been here before recommend trying the Italian food at Manukoko Rek in the Vila township.

Where to dive in Atauro

I did not scuba dive in Atauro, though there are a few dive companies and resorts servicing the island. Unfortunately, I don’t have any specific company recommendations.

The most easily-accessible reef is out in front of Barry’s Place, where you can find thousands of fish if you swim beyond the stretch of seagrass. The reef in Adara (the opposite side of Atauro) has stronger currents, and should only be explored during high tide.

How to get to and from Atauro

You can only reach Atauro via boat or plane. All crossings are weather dependent, so don’t book a flight too close to your departure to/from Atauro. Atauro Tourism has a complete list of current transport operators servicing the island.