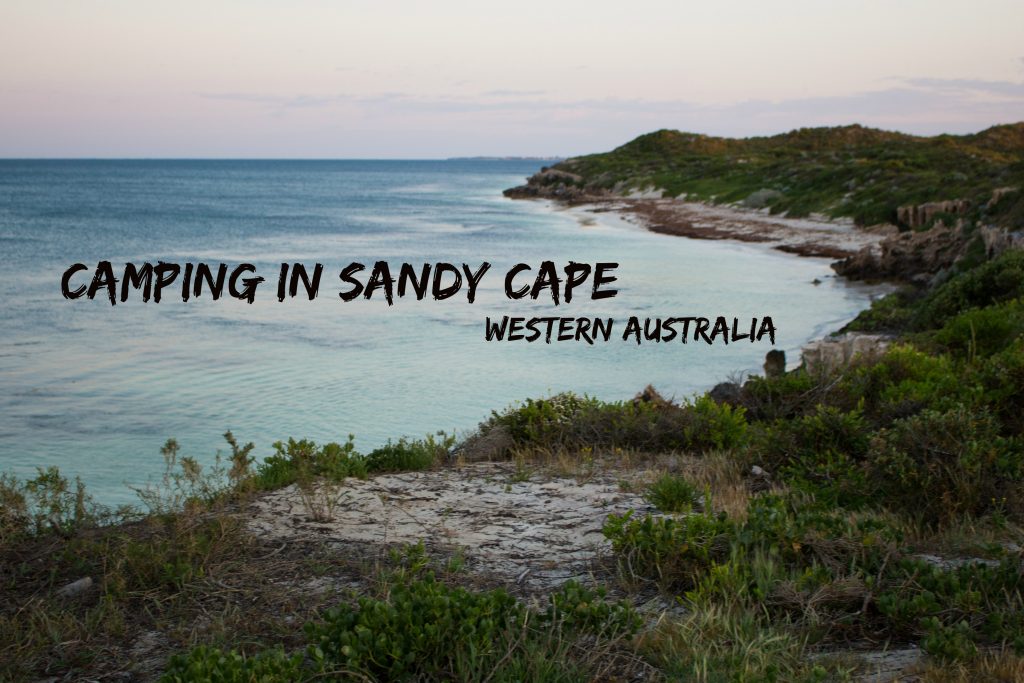 The fact that we can drive two hours north of the state’s only metropolis to go camping in Sandy Cape with an oceanfront view is what makes Western Australia so incredible. It’s one of the biggest holiday weekends of the year, and yet we need no reservations. What Western Australia lacks in culture, nightlife, and city-slickin’ excitement, it makes up for it with bare beaches. Honestly, if Western Australia’s population grew large enough to have the cultural pizzazz that other major Australians town have, it would mean that the beaches would become more crowded, polluted, and less magical. It would also mean more budgy smugglers. Nobody wants that.

Moritz and I are the type of campers who pack only the bare basics and usually forget to bring half of that. It’s not uncommon for us to use a pencil as a knife, sleep with three layers of clothes on because we forgot to pack a blanket, and “well… at least you remembered the toothpaste!” is a valid compliment before scrubbing our teeth with the edge of a towel. Swimming in the ocean counts as a shower, despite the fact I usually come out of the ocean much sandier than when I first went in. We pack everything we need to survive in the back of our well-loved Hyundai, often having to body-slam the trunk to pack it all in.

Our friend Matt, however, is practically the opposite of us. With enough equipment to survive a nuclear explosion in the middle of the outback, he has every camping trinket and tool imaginable. On the back of his seat are pockets filled with sunscreen, mosquito repellent, fillet knives, and probably even a small live kangaroo to kill and eat in case the food supply runs out (I’m scared to touch the pockets in fear of breaking something). He has a freshwater tank that can hook up to a freshwater shower – capable of holding hot water for those who hate to stew in their own filth. A stove, enough kitchen utensils to feed the Brady’s, and a tent larger than our room were just a few of the minor things included in his truck. I’d say he brought everything but the kitchen sink, but turns out he brought that too. The day we left, he told us to “bring a chair, blankets, and your tent.”

Moritz and I forgot the chair, a blanket, and we (I) almost left the tent at home.

I asked Collette, our other friend on the trip, what she brought. She shrugged and said, “I brought everything he told us to.” After a night spent sleeping cliffside, we went down to a beach that offered prime snorkeling. Halfway into putting on his wetsuit, Moritz saw a trash fly out of a car window that was driving along the beach. Due to his obsession with picking up trash, Moritz started sprinting after the car with both legs and one arm into his wetsuit yelling, “HEY! HEY! STOP!” Eventually the car stopped to check out who — or more accurately, what — was chasing them while screaming like a banshee.

He blared into the car, “Why are you throwing trash out the window?”

The man driving looked at him perplexed and asked, “Why are you yelling?”

Moritz pointed to the piles of fast food wrappers being blown along the sand.

The driver immediately glared at the two children sitting in the back seat. Then, the family got out of the car and started picking up the trash. Call me cynical, but more people visiting a place really does pose a risk to ruining it. Especially kids — those things are nasty.

But anyways, after that fiasco we were back in the water for a dive. The colder scene of batfish, kelp, and pufferfish were a stark change to the electric corals and sea life seen just a few weeks earlier up in Gnaraloo. We tricked fish by sprinkling sand into the water, causing any critter nearby to come and see if it’s food. Laughing at the fish caused me to choke on the water flooding into my snorkel.

Matt found a tunnel in the reef and went through it, threading it with his body and fins. Moritz went next and caught his fin on one of the jagged edges. When it came to be my turn, I was so buoyant that I found it really challenging to dive deeper than a few meters and opted to pass on swimming through it myself. That night, we went for a sunset walk below the cliffs of our campsite with no other soul around. When the sun hit the cliff, it cast a red light that lit up the entire edge with a warm glow. Scenes like this always make me feel so disconnected from any semblance of a previous life or looming worries. It’s as if only my arms were just a little bit longer, I could reach out and touch South Africa, the closest place laterally west to Sandy Cape. Up the cliffs and stretching east, the next biggest destination would be Uluru. When you try to find out where you belong in a place so far from everything, it’s inevitable that you’ll feel small. Walking along the tide pools, my focus was torn between not dropping my camera and avoiding stepping on any little starfish lounging in the nooks of the rocks. At some points, the cold water splashed up to my waist, soaking the skirt that I stupidly decided to wear on an evening hike. Dining on the delicacies of a vegetable roast and falafel burgers, ending with the sweet finish of burned marshmallows, we might as well have eaten at Jamie Oliver’s personal abode. This is the difference between camping with Matt, and camping with ourselves. Just ourselves? It’s a sandwich for every meal. With Matt? A feast fit for a king. I’m going to gloss over the fact that he while he put our vegetables in a separate “vegetarian friendly” pot, he also marinated our meal in beef stock… No wonder the potatoes tasted so unique. The next morning, I applied clear sunscreen to my face and asked if Moritz wanted some. He closed his eyes and nodded. With one hand, I applied the clear zinc – with the other, Collette handed me a hot pink zinc stick. A classic bait-and-switch technique resulted in quite the fashionable look. The best part is, after half an hour Moritz forgot about his pepto-bismul face and wondered why nobody would take him seriously. Before heading back into Perth, with it’s bright city lights and clean sidewalks, we stopped at Lancelin for a short surf session. Paddling out with just Moritz and no easily accessed roads around, I got the feeling that I was bobbing up and down in the oceanic food chain. This feeling has become pretty familiar by now — being in one of the sharkiest places in the world and all — but I’ve now gotten used to it. I’ve accepted that burning shoulders, too-bright sunshine, and lonely waters is just a part of my Australian experience. I used to look forward to leaving Western Australia, back when I thought the lifestyle was too slow and no friends close to my heart. Now, camping with a few of my best friends on just one of the untouched beaches of the state, I can’t imagine leaving. We’ll say goodbye someday, but thankfully not anytime too soon. Sandy Cape is 10 km north of Jurien Bay, and is a first-come-first-serve campground with a turn off of Indian Ocean Road. You’ll need a 4×4 truck and all of your own food and water if you want to back into one of the more remote cliffside campsites. The central campgrounds have a communal long-drop toilet… otherwise, bring a shovel.