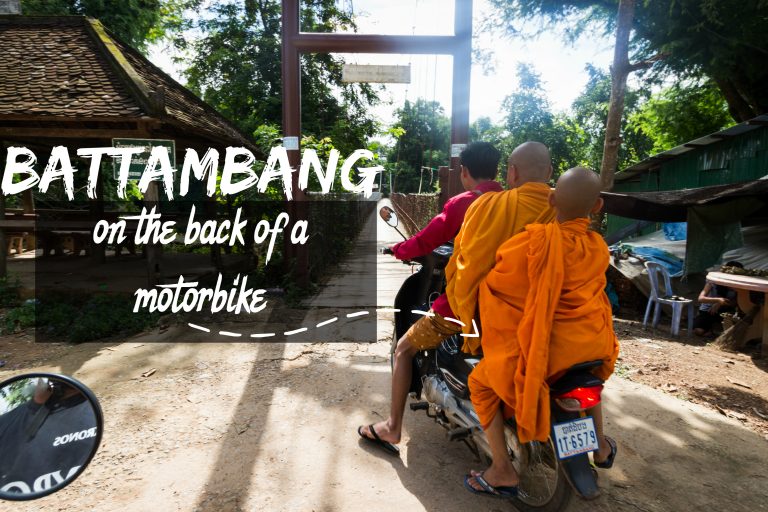 A Day With Bun in Battambang

I didn’t get a good vibe from the man that the hotel designated as my tour guide. I didn’t like the way his eyes looked through mine, as if my head was transparent. His mind seemed to be working – plotting – like a villain in a cartoon movie.

So, I rented a rusty bicycle for $2USD and cycled around Battambang to establish my bearings. I peddled my way out of the main center and followed along the plastic-lined riverbed. Corrugated metal houses on wooden stilts lined the brown water, and as I rode into the countryside, the boxy city buildings became smaller and smaller. My stomach growled, but I couldn’t read any of the signs to stop for food. It was so hot anyways that the thought of eating wasn’t exactly appealing. Sweat ran down my back and pooled onto the bike seat. I pushed the squeaky bike onward, panting in the humidity. Between homely shacks, Buddhist temples stood. Children waved and cows bellowed. After two hours, I turned the bike back towards the city, stopping only to check the map – the ink had smudged from sitting in my back pocket.

“It’s a big Buddhist festival,” an old man, smoking on the curb, explained, “Everything will be shut this week.”

Starving and determined, I weaved my bike through the crowded wet market.

I nodded, and leaned the bike against the table – sure not to hit one of the many chickens scampering around on the dirty floor. On a hot day, a spicy bowl of soup was the least appetizing thing I could think of, but I was desperate to eat something with the greatest likelihood of being vegetarian.

My four-hour ride confirmed my fear: to see anything worth seeing in Battambang, I’d need a local guide.

The wonders of the internet led me to Bun, a local Cambodian tuk-tuk driver kitted out with his own website (filled with gleaming comments) and Tripadvisor page.

Bun picked me up at 8 am sharp the next morning. I tried to avoid eye contact with my hotel-designated driver and felt his eyes glare into my back as I walked past him.

Despite being so early and so humid, Bun had the enthusiasm of a golden retriever. A smile beamed from ear to ear and he patted the back of his motorbike to hop on.

“We must stop at my house to get my helmet… Do you want one too?”

They say there’s no such thing as a dumb question. In that moment, I had to disagree.

Heads protected by padding and plastic, we set off for our tour of Battambang.

Little did I know, that day was Bonn Pchum Ben – one of the biggest Khmer holidays of the year (if not the biggest). Buddhist Cambodians lined every temple dressed in white shirts and black pants and made offerings to honor their ancestors. Bun had already made his offering early in the morning, before coming to pick me up. At the main temple, children ran up to me eager to practice their English.

“Hello! What is your name? You don’t speak Khmer?” They asked.

“Why you don’t speak Khmer?”

On and on it went with each child giving me a look that translated into, “Wow, you can’t speak Khmer? You must be an idiot.”

Little balls of rice, banana, and incense lined the pagodas. Bun explained that first, Cambodians call deceased family members by name to come and take the treats. Then, they offer it to everyone in their family ancestry. Finally, they offer food to any spirits drifting around in the ether that have been long forgotten. On our way to the next destination, we stopped for bamboo sticky rice. Before sunrise, women heat the sticky rice and pack them into sheaths of bamboo with sugar and coconut. Bun showed me how to crack the bamboo and peel the bark like a banana. The sweet goo stuck to the sides of my parched throat. Even without water to wash it down, it was heavenly. We visited temple ruins – which by now, were a common sight in Cambodia. I paid the entry fee and wrote my name down in the logbook. It’d been almost a week since a tourist visited the temple last. In front of the ruins stood a more modern temple, an update to the rubble behind it. “You will walk up many, many steps.” Bun warned me when we pulled into a crowded place. Never had I seen so many Cambodians in one small space – even coming from Angkor Wat! Sounds of honking, hollering, laughing, and talking dominated the airspace. At the bottom of endless stairs, beggars sat with outstretched hands, street vendors sold cold drinks and eggs.

Entire families, small children in tow, panted and clobbered up the tall stone steps. People lit incense and kneeled in front of shrines – honoring deceased ancestors in a lively way that my culture doesn’t. I enjoyed spending the day with Bun, who felt like a genuine friend by midday. One of the best things about traveling is getting to meet such incredible people — even though it comes with the sad fact that these relationships rarely extend beyond temporary friendship. As a last stop, Bun dropped me off at the bottom of a steep hill – admitting his motorbike wouldn’t be able to transport us up. My thighs used to the incline by now, I ventured up to the Battambang killing caves – where the Khmer Rouge murdered hundreds of innocent people.

I know it’s been a depressing and common theme in my blogs about Cambodia, but the genocide that occurred just a little while ago truly saturates every aspect of the country.

As I got closer to the cave entrance, more and more children started gathering around me like metal scraps to a magnet. One boy, taller than the rest, glared and stomped at the other children until they scattered. I told him I wouldn’t be paying him for a tour, if that’s what he was after. Still, he persisted. “This is where they killed the children…” he told me, while drawing swirls into the ground with a stick. “If you want, I can lead to you to the bottom of the cave.” I thanked and ignored him multiple times over. Nearby, I saw pairs of tourists each trying to get rid of their own self-appointed tour guides.

I couldn’t have one second alone to think and reflect on the killing cave without children talking to me, so I turned on my heel and walked out quicker than I came in. It’s like the tragedy of the past can’t be fully appreciated until the misfortunes of the present are quelled.

Atop the massive hill stood a temple that overlooked flat countryside. Again, people celebrated and made offerings. When I was lost, helpful families steered me toward a barely marked path. One man smiled and told me, “If you don’t hurry – you will miss the bats!” Every night, at sunset, millions of tiny bats fly out of the cave to begin their nightly hunt for food. I scrambled down to the bottom of the hill and reunited with Bun, who took me to the cave entrance. About fifty people lined the road and craned their heads towards the sky. Then, slowly, a few bats flew out. More and more departed from the cave entrance until they formed a black ribbon in the sky. Bun made a loud clicking noise and the bats disbanded for a moment – thinking the sound was from a bird of prey. Then, they rejoined back into the line and continued flying. I learned that at night, locals climb into the cave once the bats depart to gather the guano for fertilizer.

Parallel to the city’s powerlines, the bats formed an endless stripe in the sky. We watched them until the novelty wore off, and made our way back to my hotel. On the back of Bun’s motorbike, overwhelmed by all that happened in the day, I could only think of how underrated this small city is. Hot, confronting, fun, wild, and peaceful. It was really just another day in Cambodia.